Brimfield Shows Attract Buyers, Sellers from Around the Globe 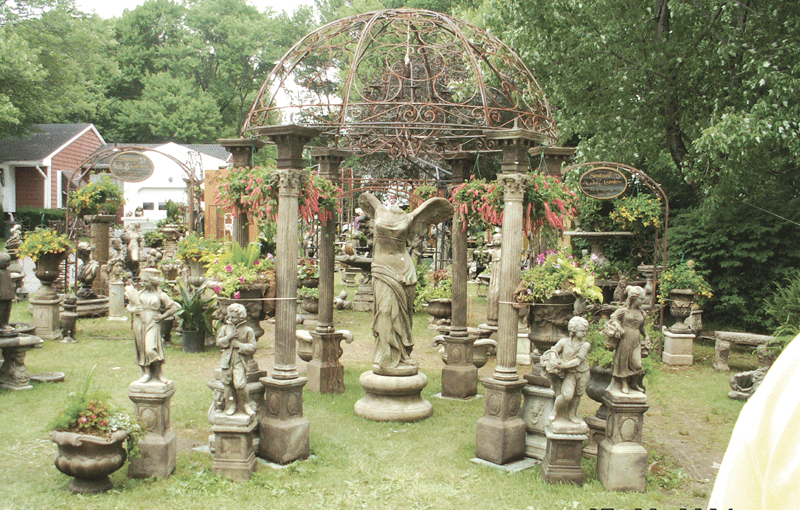 Shows are held in May, July, and September, and unusual statues are among the many items for sale.

Patricia Schultz’s New York Times bestseller 1,000 Places to See Before You Die includes the Brimfield Outdoor Antiques Show, and, as a result, the world-renowned event has been put on many people’s bucket lists.

“I had a lady call from Michigan last week who is coming in May just for that reason,” said Lenny Weake, president of the Quaboag Hills Chamber of Commerce, which fields an untold number of calls every year about the show that began 57 years ago and features about 6,000 vendors on 1,200 acres of privately owned property that stretch along a one-mile strip of Route 20.

The event is held three times a year, and the first show of 2016 will take place May 10-15. Many people make reservations a year in advance, and local hotels and motels from Springfield to Sturbridge take bookings from all over the U.S. and as far away as England, France, and Korea.

“Anything you could ever dream of can be found here,” Weake said. “It’s not just small items and trinkets. There are life-size statues, vintage ice-cream stools and counters, all types of period furniture, antique signs, toys, clocks, trains, jewelry, old magazines, movie posters, and buttons so intricate you need a magnifying glass to see the mosaics on them.”

But he admits it can be a test of endurance when a dedicated collector is in search of a specific item because vendors are not grouped by the type of merchandise they sell or the fields where they are located. In fact, there is no map to help locate a particular vendor, which makes it especially important for people to get receipts with names and phone numbers when they make a purchase, in case they want to return to the booth.

It takes days to walk the properties, and Weake advises people to dress comfortably and bring a backpack or wagon to hold their purchases because their vehicle may be parked six fields away from where they find what they want.

Some fields are open only on selected days, and because there is an endless bounty of things to see, many shoppers browse Wednesday through Sunday, including avid antique enthusiasts and collectors determined to be among the first on hand when a new field opens.

Over 1 million people attend the three annual outdoor showcases, which will be held this year May 10-15, July 12-17, and Sept. 6-11. However, the May show typically contains the most merchandise because dealers buy pieces all winter and often bring so much, they need to rent more than one spot to put it on display.

David Lamberto began helping the owner of Hertan’s Antique Show 25 years ago. That’s the name of the field he eventually purchased and runs today. He explained that the words ‘field’ and ‘show’ are used interchangeably, but the reality is that each show is its own entity and run by the person who owns the property.

The town of Brimfield is not involved with the event, although property owners must get permits, and Massachusetts state tax is collected on purchased items.

Vendors plan for the events far in advance, and many have been returning for decades, setting up their wares in booths next to their friends.

“They regard it as more than an opportunity to sell things,” Lamberto noted. “They also come to buy and network. It’s almost like a convention of antique dealers from all over the country.”

Auctioneer Gordon Reid staged the first notable Brimfield antique show in 1959 after he purchased a piece of property on Route 20. It featured 67 dealers, attracted about 300 people, and was so successful he held a second one the same year. 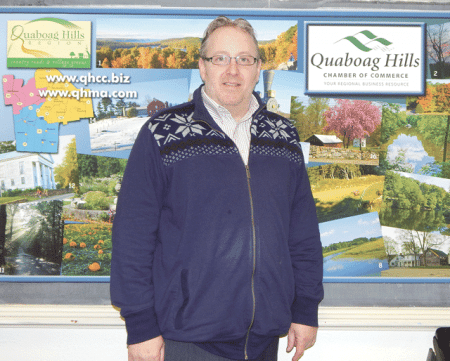 Lenny Weakes says people come from all over the world to buy and sell at the Brimfield Outdoor Antiques Show.

By the time Reid died in 1974, the 25 acres dedicated to his show had become home to about 800 vendors, and many marked the annual events on their calendars. After he passed away, his daughters, Jill Lukesh and Judy Mathieu, took over and changed his business name from the Gordon Reid Company to J & J Promotions.

Word spread about Gordon’s success, and when they began turning dealers away due to lack of space, many started knocking on neighbors’ doors, and the show expanded as owners of adjoining properties cashed in on the opportunity.

Every show or field charges for parking, and a few, including J & J, charge the first day they open, but many have no admission charge. In addition, a plethora of food vendors are spread out over the mile-long strip so visitors don’t have to worry about where to eat. Most dealers have porters that can help with large, bulky items.

And although the Brimfield Outdoor Antique Show is a venue unto itself, local businesses including restaurants, gas stations, hotels, motels, and bed-and-breakfast operations benefit from each seasonal show and have come to rely on it for part of their annual revenue.

The Quaboag Hills Chamber of Commerce receives endless calls about where to stay and what there is to do in the area, since families and spouses often attend together, but not everyone likes to shop. Weake and his staff work hard to educate them, promote their members, and tell callers about area historical or tourist attractions they might enjoy.

He added that transportation is often a critical part of a discussion because many visitors arrive at Bradley International Airport or on Amtrak and need to rent a vehicle. “People from places like New York City can’t envision what the show is like or the geography of it is like,” Weake explained. “They’re flabbergasted when I tell them there is no public transportation or taxi service in Brimfield.”

But the event is definitely an economic driver for the area, and Weake’s goal is to get people to stay at least an extra day. Many do, and visit attractions that range from the Basketball Hall of Fame and Springfield Museums to Yankee Candle and Old Sturbridge Village, while others drive to see historic sites, such as the 14 milestones Benjamin Franklin erected in 1767 when he was assistant postmaster general of the U.S. and mail was delivered to towns along the Old Boston Post Road.

The owners of properties who rent space formed the Brimfield Show Promoters Assoc. some time ago and advertise the event via the Internet, TV, and print media. They also belong to a number of different chambers and visitors and convention bureaus that help to spread the word. And some, including J & J Promotions, do their own advertising.

Social media has also helped raise awareness, and five years ago, Gretchen Aubuchon of Aubuchon Hardware started a tent for designers at Hertan’s by advertising it on Twitter. It was well-received, and for three years, busloads of designers from across the country gathered in a beautifully decorated private tent outfitted with chandeliers and a bar where they relaxed, compared notes, and stopped to rest during shopping sprees.

The tent ceased to exist two years ago after Aubuchon moved to a different job, but designers still band together, and last week Lamberto received a call from a Chicago group that will attend the May event. There are also celebrities and buyers from many different places, including local antique shops that rely on the show to boost their inventory of sought-after items.

“Ralph Polo sends a team to find things to decorate their stores, and we see people like Barbra Streisland and Martha Stewart every year,” he told BusinessWest.

The popular TV show Flea Market Flip usually stages a taping in Brimfield at least once a season, and Weake said the newest, most-sought-after items include repurposed furniture and building materials that have been transformed into lights, wine racks, and other one-of-a-kind pieces.

When eBay first became popular, business decreased slightly, and although people still use their cell phones to compare prices and haggle, there is nothing like the joy of finding something unexpected, being able to touch it, and bringing it home that same day.

“Our father was a visionary. He pioneered the show, did beautifully with it, and we hope we are making him proud,” Lukesh said.

Leake is happy it draws so much attention to the Quaboag region and also benefits area businesses.

“It’s the place to be, and people come here from all over the U.S. as well as from other countries,” he said. “We want them to have a good time, and they do. It’s a beautiful area and a treasure hunt; there is everything under the sun, and you never know what you will find.”