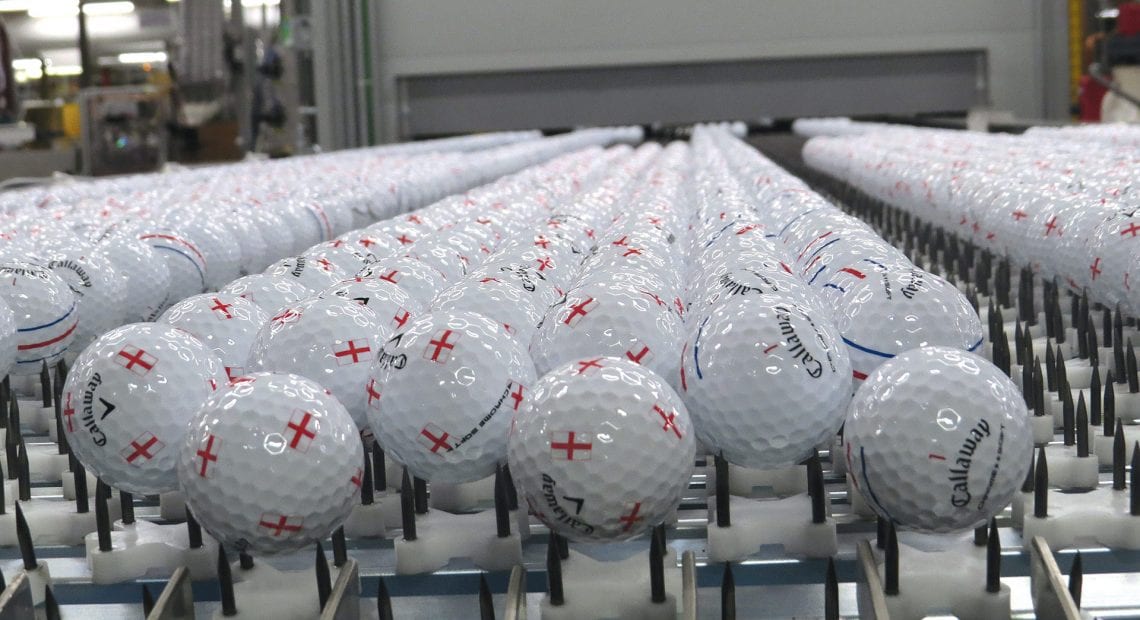 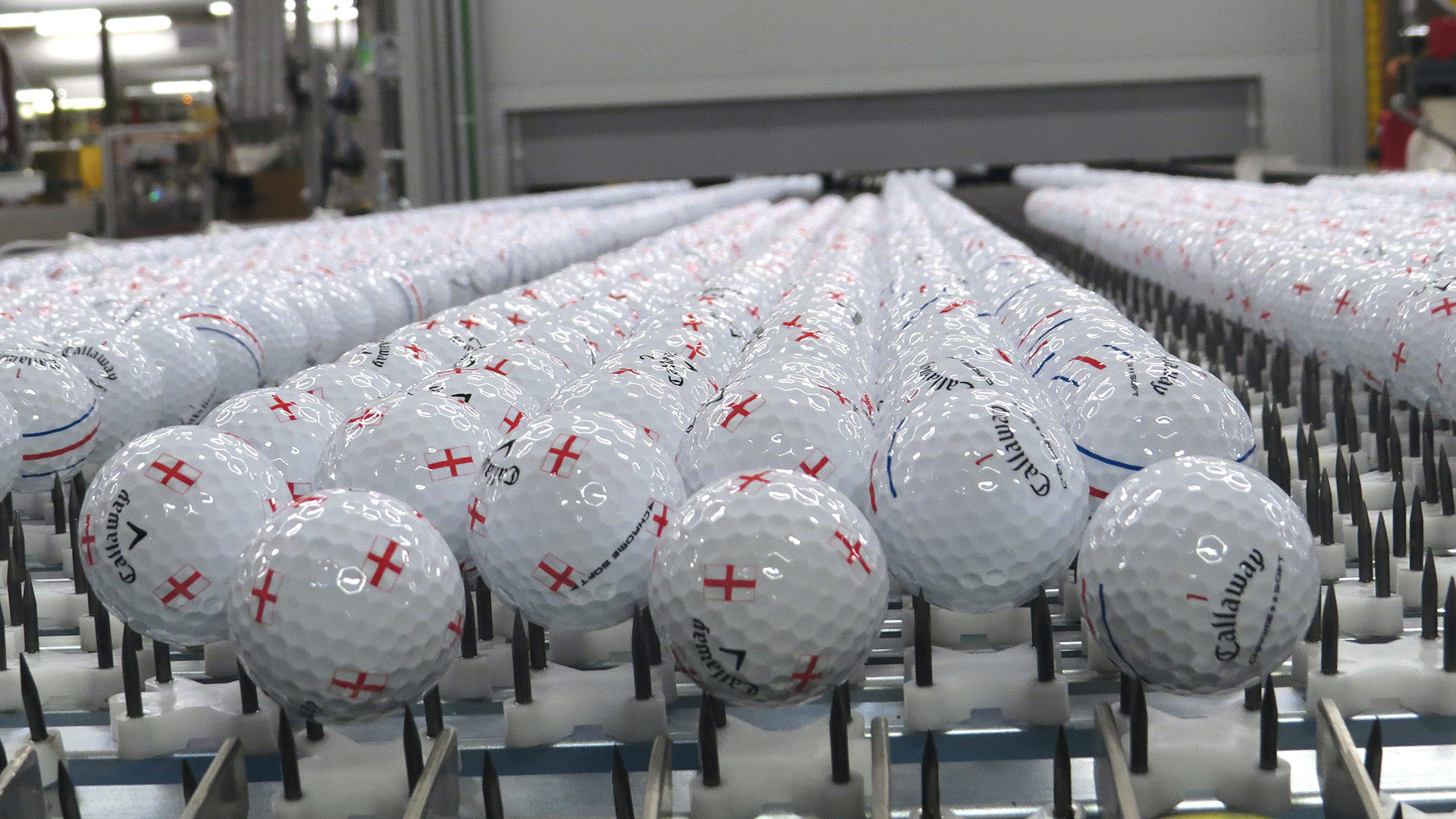 The Callaway golf-ball-manufacturing facility in Chicopee has borrowed a famous page from the Chicago Cubs’ playbook.

When the Cubs win, a white flag with a large blue ‘W’ is flown atop the legendary hand-operated scoreboard in center field. (Of course, if they lose, a blue flag with a white ‘L’ goes up, but that’s another story.)

Back to Callaway. When a member of its team — comprised of players on the various professional tours who play Callaway balls and clubs — posts a win, a flag with a large script ‘C’ (the same one used for the Callaway brand) flies underneath the American flag on the pole outside on the facility on Meadow Street.

“The flag goes up the Monday morning after a win, and it flies until Friday that week,” said Vince Simonds, director of Global Golf Ball Operations for Callaway, adding that it’s been flying quite a bit recently.

Indeed, it was up just last week after the best-known member of the team, Phil Mickelson, prevailed at the AT&T Pebble Beach Pro-Am. Meanwhile, Xander Schauffele, a rising star on the PGA tour, has won twice over the past several months; Australian Marc Leishman won last fall, as did Spaniard Sergio Garcia; and Belgians Thomas Peters and Thomas Detry won the ISPS Handa Melbourne World Cup of Golf in late November.

Simonds told BusinessWest that the flag is one of many initiatives designed to raise awareness among those inside the plant about how the products they’re making are generating results at the very highest levels — and generating pride within that workforce as well.

“It’s part of something we call the ‘21 Initiative,’ a multi-year evolution to transform and re-engage as we bring on new machinery and new capacity capabilities,” he said, noting that ‘21’ is short for 2021. “We started putting the flag up because we’ve grown so fast that we need to re-engage with our employees and share our success with them.”

But Callaway also wants to bring attention to what’s going on inside the plant, which is on a winning streak itself.

Indeed, as the Callaway brand has risen to number two in overall sales within the golf-ball market behind Titleist, the Chicopee plant has doubled its workforce over just the past 18 months, from roughly 180 to more than 363 (the highest number in more than a decade), and is expected to surpass 400 later this year, making this one of the better manufacturing success stories to be written locally in recent years.

“We’re very bullish on 2019,” said Simonds, adding that this optimism is grounded in the company’s recent surge within the golf-ball market, fueled by the introduction of several new and somewhat groundbreaking products. These include the Tour Soft ball, which has become popular with professionals and amateurs alike. There’s also a version of that ball known as the Truvis, stamped with pentagonal images — and now a host of other options, from shamrocks to butterflies to other custom logos — that give the product a soccer-ball look.

“We started putting the flag up because we’ve grown so fast that we need to re-engage with our employees and share out success with them.” 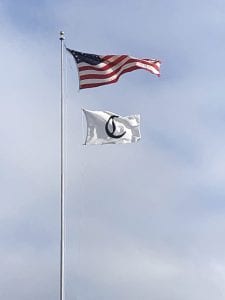 The ‘win flag’ flies on the pole outside the Callaway plant. It’s been flying quite regularly these days.

“The Truvis has really taken off; sales are very strong, and we’re booking a lot of business on the custom side of things,” said Simonds, adding that the portfolio of products is poised to grow with the addition of the ERC Soft, with those letters short for Ely Reeves Callaway, founder of the company.

Overall, somewhere between 200,000 to 250,000 balls, including the new ERCs, are rolling off the lines at the Chicopee plant each day, a slight increase from a year ago. More importantly, the mix has changed, said Simonds, noting that, while the plant supplemented its capacity with non-tour, lower-end products in the past, it no longer does that due to demand for the higher-end balls.

And as those numbers continue to increase, so too does the number of people clocking in at a plant that now runs 24/7.

These workers cover a broad spectrum, said Simonds, from engineers who have brought the new products to the assembly line to those on the shop floor to those in working in the warehouse.

Findng and retaining talent has become an issue, as it has for just about every manufacturer in the region, said Simonds, adding that the company is working with Springfield Technical Community College and area vocational high schools to create an adequate pipeline of workers.

For this issue and its focus on manufacturing, BusinessWest returns to the Callaway plant and a company that has been, as they in this sport, flag hunting, and has had a great deal of luck in those endeavors.

As he offered BusinessWest a quick tour of the Callaway plant and showed off the latest of the new Truvis machines to be added over the past two years, Simonds introduced Les McCray, who’s been working at the Chicopee facility since Gerald Ford was in the White House.

“We try to find people who have the education and technical background, obviously, but also a passion for the game of golf.”

There are still a number of employees with considerable longevity still working at this sprawling plant, but a growing number have been there for months, not years. And while employment has spiked in recent months, it’s been trending upward for several years now, said Simonds.

There have been several milestones along the way that have brought us to this moment, including the introduction of the Chrome Soft, which dramatically altered the trajectory of Callaway’s ball division, and the emergence of the Truvis, which has added a new dimension — metaphorically if not quite literally — to golf-ball design. 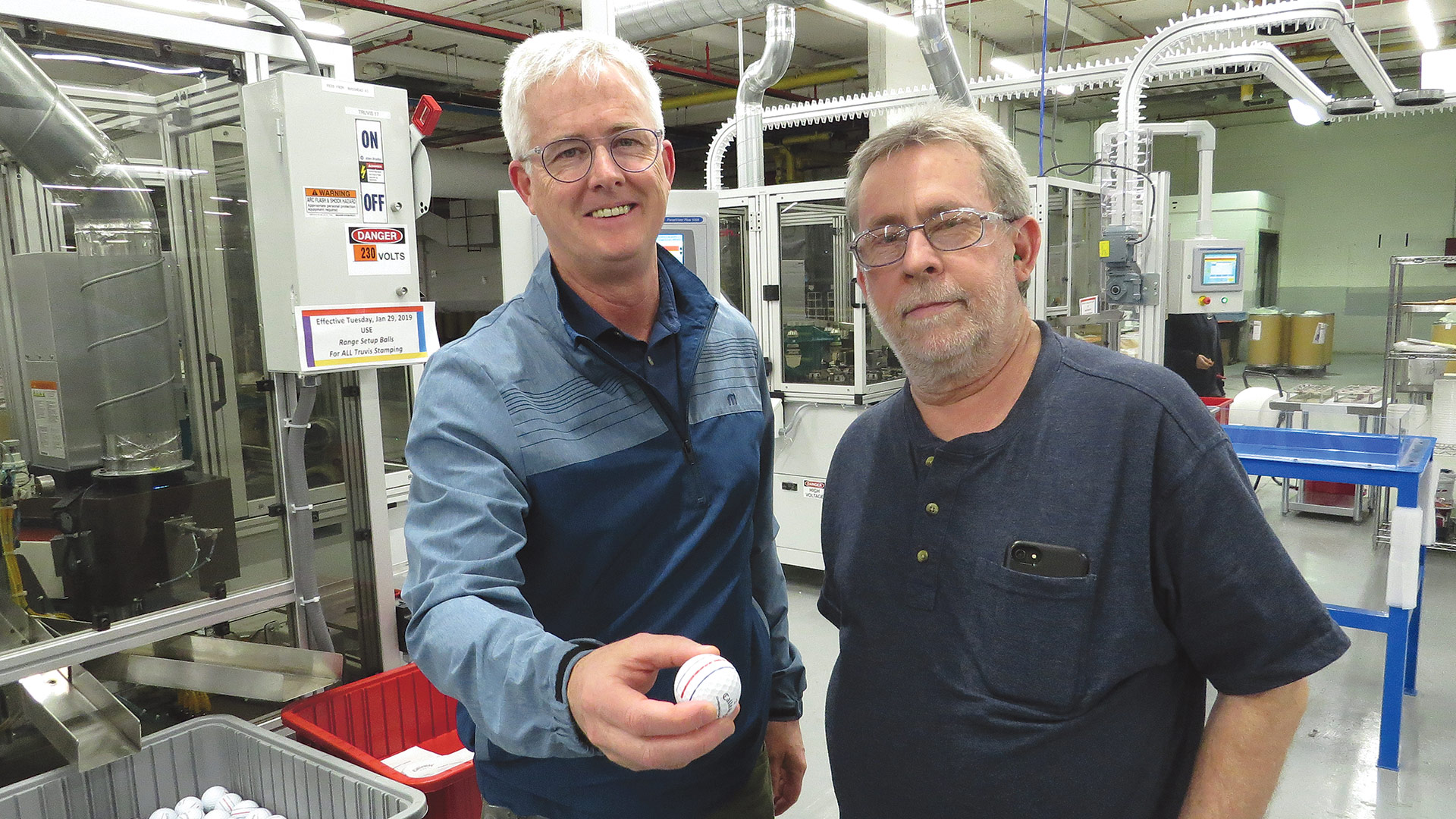 Vince Simonds, left, with Les McCray, who’s been working at the Callaway plant for more than 40 years.

“There is a functional aspect to this,” he said in reference to the alignment of the pentagons or logos and how it helps people improve their chipping and putting. “But mostly, it’s just a fun and unique way to mark a golf ball. The feedback we get from consumers is that they enjoy it because they can instantly recognize their ball in the foursome.”

The ERC Soft has something approaching that same quality because of a feature called Triple Track Technology — three lines engraved on the ball to help with putting alignment (Mickelson was using a dfferent Callaway ball with the same technology when he won at Pebble Beach). That’s just one innovative aspect to this latest addition to the portfolio, said Simonds, adding that this long but soft ball has a new ‘hybrid’ cover and graphene core and is designed for players with less than tour-level swing speeds.

It’s the latest in a string of advances and new products that have led to a surge in market share, said Simonds, adding that, according to Golf Datatech, which measures sales in pro shops and related outlets, Callaway has a 16% share of the market compared to 7% in 2012. But National Golf Foundation data, which also includes sales at large retail outlets like Dick’s Sporting Goods, gives Callaway a 23% market share based on dollar amount sold. 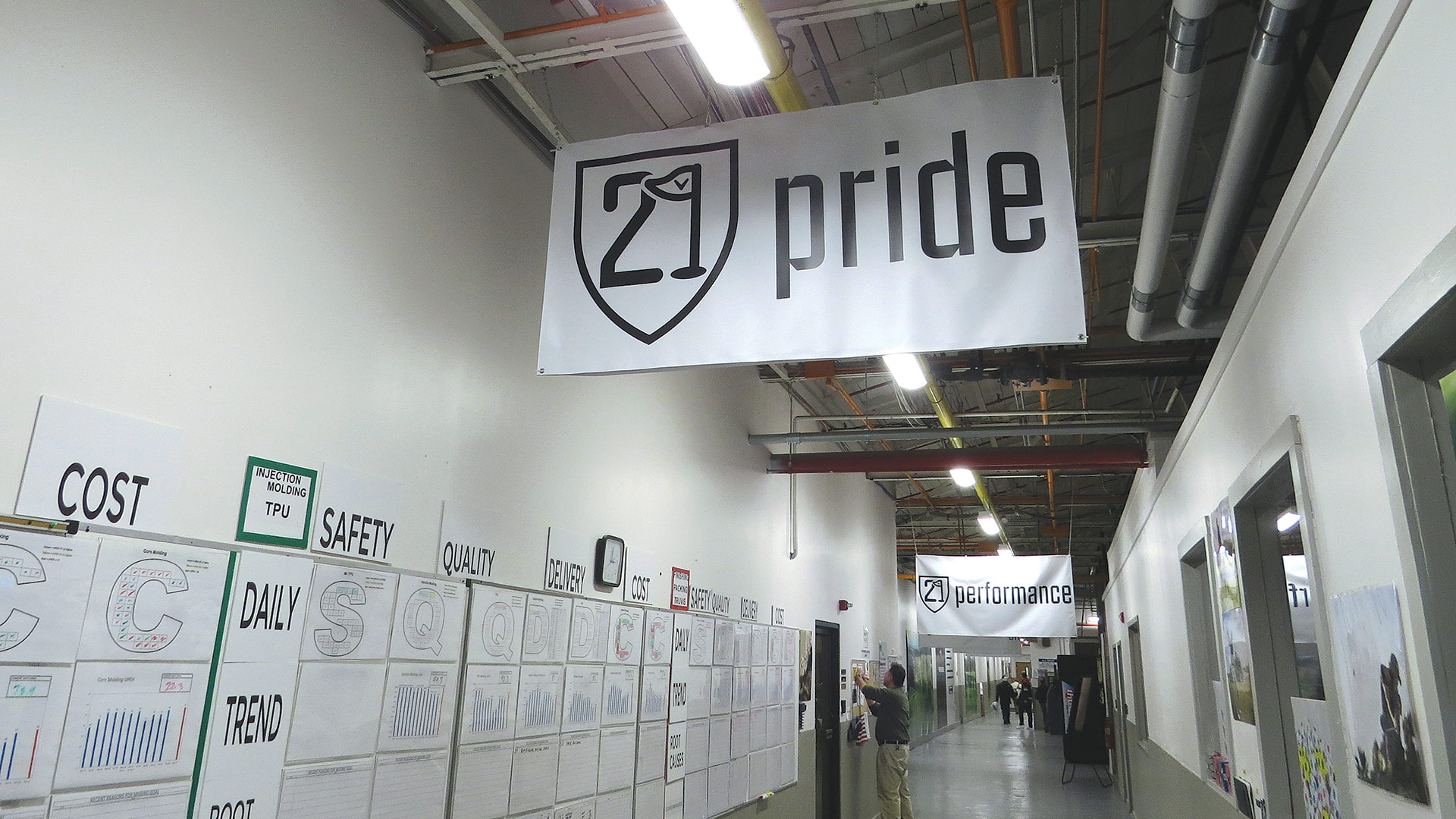 The Callaway Plant in Chicopee is engaged in what it’s calling the ’21 Initiative,’ (short for 2021) a multi-year process of evolution and transformation as it brings on new machinery and scores of new employees.

This growth has led to more ‘C’ flag-raising ceremonies outside the Callaway plant, and more people working inside it, said Simonds, adding that the company has been adding employees on a regular basis over the past few years.

That’s due in part to a leveling off of production, meaning it’s more steady throughout the year as opposed to being more seasonal as it was years ago, geared toward peak sales at Christmas and especially Father’s Day.

“Our real production season is September to June, with maintenance in July, and then we begin to ramp up for new products in August and begin manufacturing in September and October,” he said. “We support the globe around here.”

And, as he noted, the new arrivals to the plant cross a broad spectrum, from process engineers who design the breakthroughs to skilled, unskilled, and semi-skilled positions on the plant floor. Finding them is, indeed, challenging, said Simonds, adding that, with the engineers and management personnel, the company recruits from where it can.

“We try to find people who have the education and technical background, obviously, but also a passion for the game of golf,” he explained, adding that the last ingredient is a key part of the mix. “We have an R&D team in Carlsbad, California that we work very closely with, but the scale-up and commercialization happens here; we have a team of 12 process engineers and technicians that work hard every day designing systems to make golf balls so people can play better golf. That’s not a bad way to make a living.”

“There is a functional aspect to this. But mostly, it’s just a fun and unique way to mark a golf ball. The feedback we get from consumers is that they enjoy it because they can instantly recognize their ball in the foursome.”

With machinists, Callaway, like most other manufacturers in the region, must compete for a limited number of qualified workers while also dealing with the retirement of Baby Boomers.

“We’re continuing to have dialogue with STCC, and we’re working closely with the trade schools in the area,” he said. “We’ve gotten some really good young people out of Putnam [Vocational-Technical High School] in Springfield — it’s been a really good pipleline for us. But they’re young, and they need training and development, so we’re doing that.”

With so many people coming in recent months, Simonds and his team are grinding, as they say in golf, to keep the growing workforce focused on the mission and the basic tenets, such as safety, quality, and continuous improvement.

“We’ve brought so many people on so fast that the connection with the employee is super important,” he said, referring to the broad 21 Initiative. “So we’re doubling down on our efforts in that regard.”

As noted, the Callaway flag flying after wins on the pro tours is a page taken from the Chicago Cubs’ script.

But in just about every other way, the story being written on Meadow Street in Chicopee is an original. The plot lines are engaging — new products and advances with intriguing names, like Triple Track Technology. And there are a host of stars, from Xander Schauffele and Phil Mickelson to Les McCray.

No one’s quite sure how this story will end, but right now, Callaway and its Chicopee plant are both on a roll, and, like the players on tour who have promoted the flag to fly, they’re winning big. 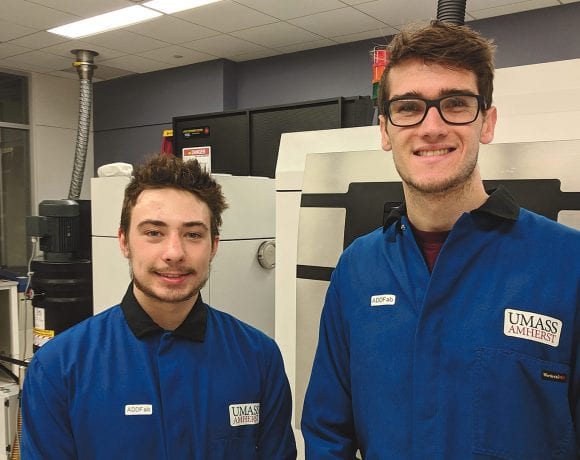