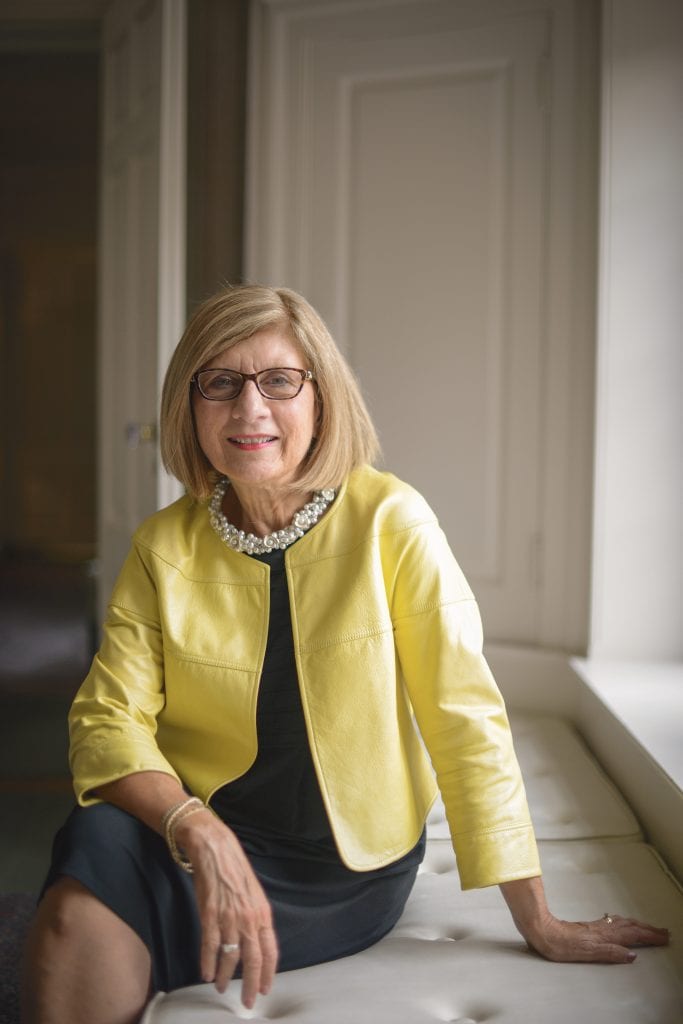 This Inspirational Leader Keeps Raising, and Clearing, the Bar

When, 17 years ago, I was contemplating a career move out of the financial-services sector, I made a short list of the leaders in the region for whom I wanted to work. Carol Leary was, and remains, at the top of the list.’

So begins the nomination of Leary, president of Bay Path University, for the Women of Impact award. It was authored by Kathleen Bourque, vice president for University Relations and board liaison for the school, who, 17 years later, is still there, obviously.

In writing her nomination, Bourque captured — probably better than this writer could, although he has done it several times over the past 24 years — not why Leary is worthy of an award, but why she has become an incredible force of progress, hope, and, yes, leadership, on her campus and across the region.

Indeed, here’s more from that nomination form. “A leader with boundless energy, she has an infectious zeal for life in general, and for education in particular. Determined and magnetic, she is the ultimate role model. Those of us who work with her are perpetually inspired by the time and energy she so generously gives to the university, our students, and the community.”

That sums things up pretty well, but there’s more, a lot more — well-written and poignant.

“Her accomplishments are many, varied, and impactful; her unwavering passion for women’s education has positively changed the lives of thousands of women, as has her commitment to the advancement of women in general. Spirit, service, compassion for others, and professionalism all buttress her leadership and in so doing have caused her to wield tremendous impact on our community.”

Tremendous impact indeed. Since arriving on the Bay Path campus in 1994, Leary has transformed it from a sleepy — that’s the word many opt to use — women’s college of fewer than 500 students issuing only two-year degrees to a university with more than 3,300 undergraduate women and graduate men and women with a host of graduate degrees.

“Her accomplishments are many, varied, and impactful; her unwavering passion for women’s education has positively changed the lives of thousands of women, as has her commitment to the advancement of women in general.”

In 2013, Bay Path launched the American Women’s College, the first all-women, all-online baccalaureate program in the nation. That was a big year for the institution, because it was then that it became a university and also opened the Philip H. Ryan Health Science Center for allied-health programs.

But every year has been big for Bay Path, as growth has been continual and profound — and the same can be said of its reach, especially with the annual Women’s Leadership Conference, which has drawn keynote speakers ranging from Margaret Thatcher to Maya Angelou to Jane Fonda, among many others.

But Leary’s influence extends far beyond the campus and the conference. Locally, she’s become involved with agencies ranging from the Community Foundation of Western Mass. to the Beveridge Family Foundation. Nationally, she serves as a member of the Department of Homeland Security’s Academic Advisory Council, representing the only women’s college on the council, a strong nod toward the work Bay Path is doing to educate women in the fields of cybersecurity, cybersecurity management, and counterterrorism at both the graduate and undergraduate levels.

She’s a frequent speaker on subjects ranging from women’s leadership to issues in higher education, and has written a book, Achieving the Dream: A How-to Guide for Adult Women Seeking a College Degree.

Asked about it all, Leary said she’s simply leading by example, in all kinds of ways.

Indeed, none of her parents or grandparents graduated from high school, but they encouraged her to gain a college education. With it, she has changed her life and thousands of other lives. The message she has for the world — and the force that drives her — is that this is the power of education. 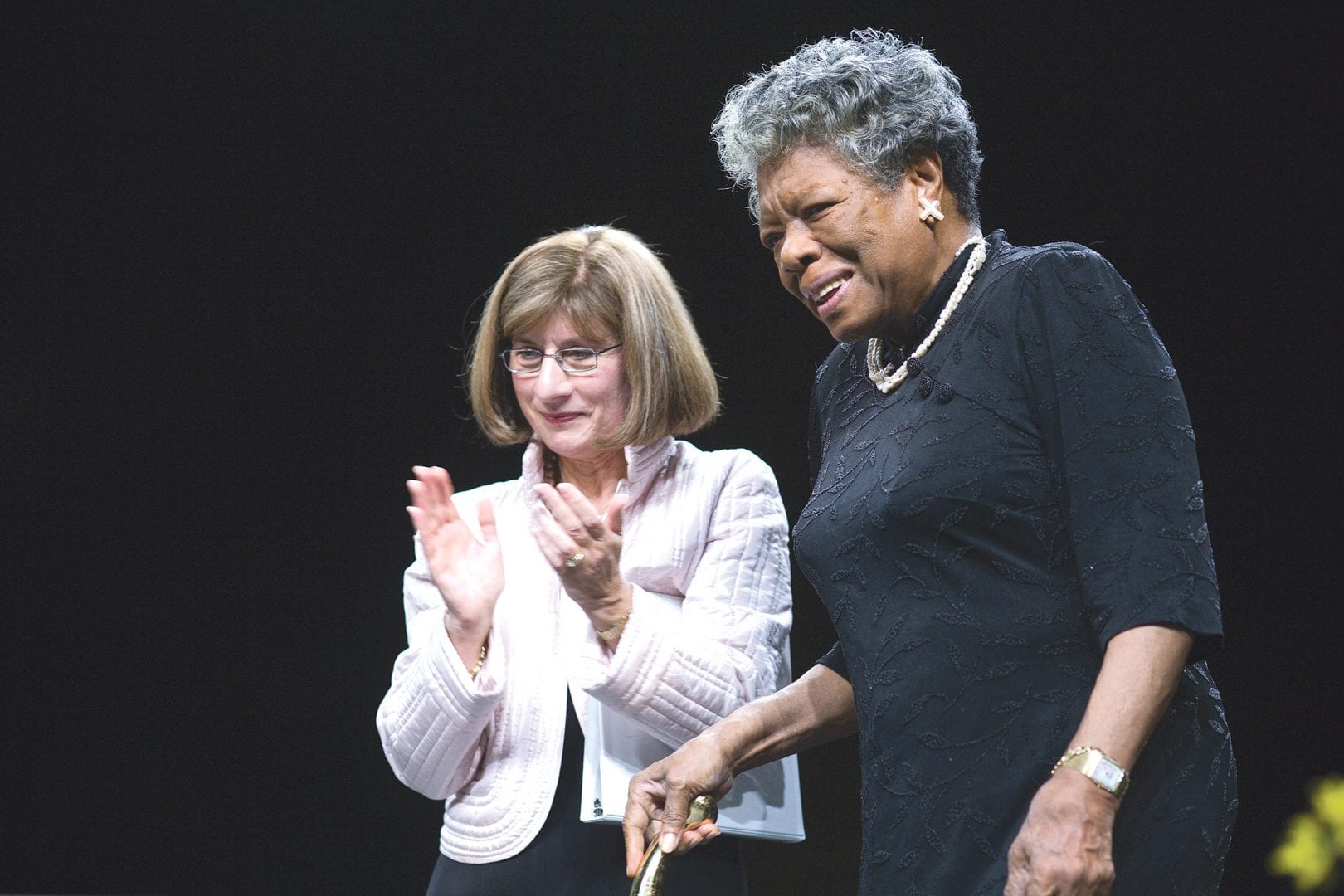 Carol Leary introduces poet Maya Angelou at one of Bay Path’s Women’s Leadership Conferences, one of many new programs and initiatives she has introduced.

“One generation later, and you can see the impact of the education,” she said, speaking not about herself, necessarily, but every first-generation college student. “Hopefully, the person has a higher-paying job than they perhaps might have had. And what does that person do with the money? They educate their children, so that generation is assured a better life; they buy a house and pay taxes; they can contribute to their communities with time, talent, and treasure.

“One person getting their education has inter-generational impact,” she went on, adding that this is the fuel that drives Bay Path and the mission that defines her career.

And it also explains why she’s a Woman of Impact.

The students in that “Women as Empowered Leaders and Learners” class didn’t know it at the time, but they were providing some very helpful material for this examination of Leary’s life and career and the reasons why she’s been designated a Woman of Impact.

Leary was the guest speaker at the class that day, and as she recalled what transpired for BusinessWest, the highlighted back and forth between her and the students speaks volumes about her view of the world and the mindset she brings to her job and her life.

The 12 first-year students were asked to bring questions to ask her. Before they could do that, she had one for them: “I asked them to think about a woman leader,” Leary recalled. “I told them to take 30 seconds and tell me the first person that comes to mind, and then the attributes that makes someone a leader.

“Out of the 12, 11 of them said either godmother, mother, sister, cousin, grandmother … and then talked about perseverance, overcoming obstacles, being organized, balancing many balls in the air, and being very supportive,” she said. “And then I thought about how wonderful it was that, in their minds, the women they think of as leaders are everyday women.

“And that was my whole point to this class,” she went on. “Celebrating ordinary women doing extraordinary things is what we need to do more of in this country. That’s what we try to with our students, our faculty, and the speakers we bring here. Many of these people may not be making the most money in the world at their job, they may not have the big title of director or vice president, but there is potential in everyone to make a difference.”

Making everyone, and especially women, aware of this, and then helping them realize their potential to make a difference would be a quick and effective way to sum up Leary’s life’s work.

By now, most people know the story of how, in 1994, Leary, then an administrator at Simmons College in Boston, was encouraged to apply for presidents’ positions, and especially the one at Bay Path, and did so even though she had reservations about whether she was ready to take the giant career leap.

It is now part of Bay Path lore that she and her husband, Noel, were traveling back to Boston from a vacation in Niagara Falls and decided to make a stop at the Longmeadow campus. The two fell in love with just about everything, and Leary took over a few months later.

“When we talk about the impact of higher education or my role as educator, I get up every day saying I’m not just teaching one student. I am making an impact, hopefully, on generations to come.”

As noted, this was and is a turnaround story in every respect. Leary has taken Bay Path from sleepy to wide awake, and from a school that few outside this region knew about to one that recently hosted 27 colleges and universities from the 37-member Women’s College Coalition to discuss new and innovative learning models for women of all ages and stages of their lives.

It’s been a stunning transformation for the once-tiny school that has found its way onto the map and into national prominence.

When asked how it was accomplished, Leary mentioned teamwork, collaboration building, and some things the school now teaches in its classrooms — innovation and entrepreneurship.

While it’s quite difficult to tell the many facets of Leary’s story quickly and easily, Bourque managed to do so in her nomination with a hypothetical, but in many ways real, day from Leary’s time at Bay Path.

“On a given afternoon, she could be sipping tea with Lady Margaret Thatcher (and in fact did!), and that same night could be opening her home to share dinner with undergraduate women (and she does, frequently). Remarkably, she is equally enthusiastic and comfortable in both venues. To Dr. Leary, the promise of a young woman launching her studies in biology is as important as engaging the presence and prominence of a global head of state.”

Indeed, it is, and that anecdote speaks to the mindset Leary has maintained throughout her career at Bay Path. She has shaken hands with Nobel Prize winners, heads of state, prominent writers, and activists. But she also makes it a point to try to meet every student who comes to the Bay Path campus and learn their name.

And when she can, she ventures into the classroom, as she did with that “Women as Empowered Leaders and Learners” class. And her answers to some of their questions reveal more about why she has been named a Woman of Impact and how she has become such a great mentor.

When they asked her who supported her and enabled her to achieve her dreams, she started by listing her parents and grandmother, who, despite their lack of education, impressed upon her the importance of school and the notion that she could achieve anything she wanted if she applied herself.

And then, she mentioned her husband, Noel, and while doing so, imparted some important advice on her audience.

“He encourages me, and he’s given up a lot in his own career because of my career,” she noted. “I gave up a career and moved to Washington for him, and five years later, he gave up his career to move to Boston for me.

Then one of the students asked if Bay Path would do what so many other women’s colleges have done over the past few decades and go coed. Leary’s answer was an emphatic ‘no.’

And that brings her back to her point about education being inter-generational in impact.

“When we talk about the impact of higher education or my role as educator, I get up every day saying I’m not just teaching one student,” she told BusinessWest. “I am making an impact, hopefully, on generations to come.”

Suffice it to say that she has.

While Leary’s list of accomplishments, accolades, and awards is, indeed, quite long, it would probably be safe to say that her greatest power, her greatest talent, is the ability to inspire others, to make them dig deeper, reach higher, and achieve things they maybe (or probably) didn’t think they could.

That’s why Kathleen Bourque put Leary on her very short of people she wanted to work with and for, and why she has stayed at Bay Path for nearly two decades.

So it’s fitting that she gets the last word on this subject, sort of.

“She has touched my life in innumerable ways, professionally as well as personally. Carol Leary is an extraordinary woman.”

There are countless people, men and women, across this region and now well beyond it, who would say the same thing. 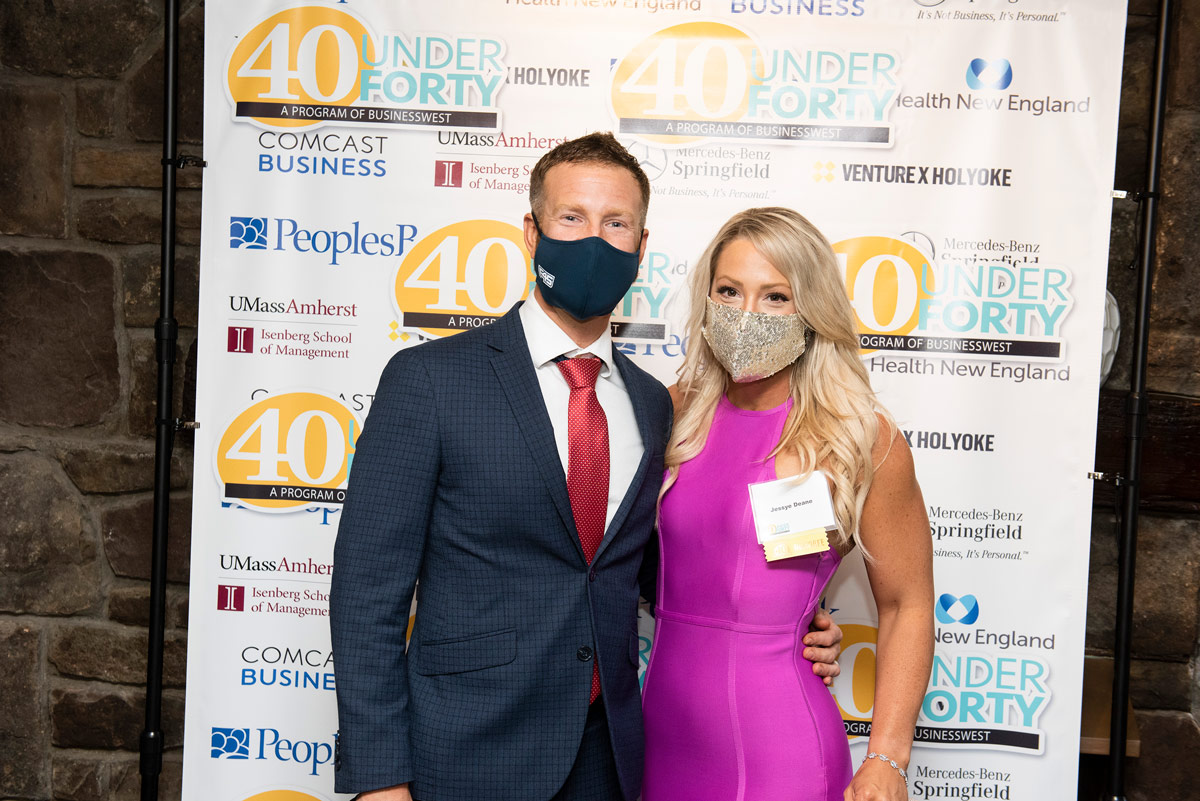