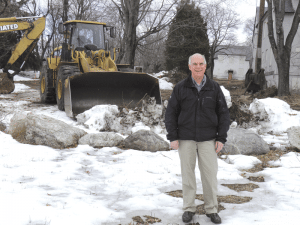 Douglas Albertson says redevelopment of the former Belchertown State School — and other highly visible projects — are lending momentum to the town’s growth.

With equal amounts of anticipation and relief, officials in this Hampshire County community talked about how redevelopment of the former Belchertown State School campus is finally underway — at least in a way that’s visible to passersby.

“We’re obviously excited about it,” said Town Planner Douglas Albertson with a touch of understatement in his voice. “We just approved a site plan for an assisted-living facility that will be built by the Grantham Group LLC in Marlborough.”

The development will include 83 units, and 40 of them will be affordable housing, he went on, adding that the town has a large senior population and the project will be particularly advantageous to older people who need a place to live but can’t afford market-rate rents.

The three-story structure, which will be known as Christopher Heights of Belchertown, is expected to cost $15 million. However, the Grantham Group has applied for $5 million in federal tax credits and another $2 million in state subsidies. Albertson said the developer is also seeking $250,000 in Community Preservation Act funds from the town, and the Board of Selectmen will vote on the request in May.

“Town officials, MassDevelopment, and BEDIC [Belchertown Economic Development & Industrial Corp.] have all worked hard to facilitate this project,” he told BusinessWest, adding that MassDevelopment is in charge of overseeing the cleanup of the former state-school property.

The Grantham Group was chosen to build the senior-living facility from among three entities that responded after MassDevelopment issued a request of interest for the site.

“They’re known for their assisted-living communities, and ever since the school closed, residents have said they would like to see one built on the land there, so we are thrilled that this is happening,” Albertson said. “It has great potential to enhance the community.”

He said the Grantham Group has developed dozens of assisted-living facilities, including the $13.4 million Christopher Heights of Northampton, which is situated in the Village Hill neighborhood on the grounds of the old Northampton State Hospital.

Although the property has been vacant for decades, several studies have been conducted to determine options for its reuse. Albertson said the last one was completed in 2009, thanks to $100,000 the town received from the state after the campus was designated as a priority development site.

At that time, Belchertown officials hired RKG Associates to assess the land, buildings, and layout of the 85-acre campus. When they finished, Fuss and O’Neill, a civil and environmental engineering consulting firm, created a conceptual use plan based on RKG’s findings. The work was done in association with the Massachusetts Development Finance Agency, and although they came up with two uses for the property, mixed-use development was seen as the most viable option.

“Our strength is that we are a residential community,” Albertson said, adding that the report stressed that any new residential housing should be targeted to fill gaps in Belchertown’s existing housing inventory, which includes housing for seniors.

The report also concluded that the western end of the property was the most suitable location for residential housing, and advised a gradual transition to mixed-use buildings, then to businesses on the eastern end of the campus near the railroad.

“We’re still using their concept in our work with MassDevelopment,” Albertson said, adding the state agency is developing a master plan for the property.

The report also found the town had enough infrastructure to support dense development on the campus, and Albertson told BusinessWest that Belchertown officials have kept the property in mind over the years as they upgraded and expanded sewer and water distribution lines.

“Provisions have been made to accommodate expansion in that sector of town,” he said, adding that, after the buildings are razed to make way for the new assisted-living complex, the town will seek to bond up to $1.2 million for road construction and utilities over a period of several years.

For this, the latest installment in its Community Spotlight series, BusinessWest looks at developments in Belchertown and how the state school project is expected to create momentum on several levels.

Belchertown State School for the Feeble Minded opened in 1922, had a storied history, and was closed in 1992 due to multiple lawsuits that cited inhumane conditions and poor treatment of patients. In 1999, the state turned the property over to the town, and the Board of Selectmen created the BEDIC to manage it and appointed a board of directors.

Although town officials did their best to secure the buildings, Albertson said, the structures have been vandalized over the years. And although a number of proposals were put forth for the site, none of them ever came to fruition.

However, that has finally changed, and the first signs of new life at the old state school could be seen last month when Springfield-based Associated Building Wreckers started working on the three acres where Christopher Heights will be built. The company removed asbestos and other hazardous materials from the area and will begin demolishing buildings in the section known as Pad I this month.

“The work is being paid for with state funding,” Albertson said, explaining that the Commonwealth has released $4 million of $10 million approved to conduct a comprehensive cleanup of the state school campus.

The town also instituted a special type of zoning for the site late last fall, and its Business Neighborhood Center District plan design will provide aesthetic consistency with the surrounding neighborhoods, while encouraging economic development. It will increase possible uses for the property, but site-plan approval by the Planning Board will be required for each development in the district.

“The one thing that was excluded is single-family housing because we didn’t want to compete with local builders who are finishing up subdivisions in town or hope to create new ones,” Albertson explained. “However, we do want to encourage housing for single people, seniors, and artists or artisans who want to create a studio and live and work in the same place. We would also like to have enough density so that people can patronize businesses on the property and work there.

“And now that the economy is improving, things are getting busy in other areas of Belchertown again,” he went on, adding that economic development has gained real momentum over the last year and many home-based businesses are also thriving. “It’s a hidden economy in Belchertown, and some of these businesses do expand.”

Belchertown has two new restaurants that are doing well, he went on. Oneis Almeida’s Café, which was built on an empty lot last summer near the state school campus on Routes 202 and 21, “has been a real success,” Albertson said.

Antonio’s Pizza by the Slice has also gained a following since it opened late last spring in its newest location on 31 Federal St.; others are in Amherst, Easthampton, Rhode Island, Texas, and Illinois.

“The owners saw an opportunity for a sit-down restaurant here,” Albertson said, adding that the location was home to Saporito’s Pizza before it was purchased in the early part of 2014. “The parking lot was packed immediately after they opened, and they have been busy ever since.”

Nelson’s Barber Shop also opened on the first floor of a house on North Main St. that had been a poorly maintained rental property for decades. “The neighbors are happy about it,” Albertson said, noting that the upper story is still a residential rental, but the entire ground floor is occupied by the business.

In addition, Belchertown’s first tattoo shop opened in February in the same strip mall as Antonio’s Pizza, and Surner Heating Co., which provides fuel and service throughout Hampshire County, is expanding its Belchertown facility.

“They’re adding propane and putting in two large underground tanks; the city recently approved the site work, which began several weeks ago,” Albertson said, adding that the property includes a building that houses a mini-mart, several apartments, and a gas station on Federal Street. “Their heating-oil storage tanks are also at that site, and they lease one to Noonan Oil; the business expansion reflects the fact that fewer people want to heat with oil. Propane is another option, and many people like to cook with it.”

“The redevelopment of the campus has been a long-awaited project, and we’re excited about it. When it is done, we anticipate growth in surrounding areas; we believe it could be a catalyst for the whole area,” Albertson said. “The campus has always been pretty, but it hasn’t been maintained — but that is about to change.”

He cited a small plaza across the street from the property as an example of a site with room for growth. “The complex could be expanded. Plus, there are several other parcels available nearby,” the town planner said, adding that Easthampton Savings Bank opened a branch last year at the entrance to the grounds of the former state school.

Christopher Heights will support 65 construction jobs and create 40 permanent positions, and when the assisted-living community is complete, a long-neglected area in Belchertown will finally begin to realize its potential.

“We believe that, once the Grantham Group develops a portion of the site,” Albertson said, “it will give others the confidence to follow.”