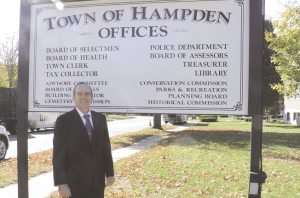 John Flynn says Hampden is a town rich in community spirit, where many municipal officials are following in the footsteps of family members who served before them.

John Flynn says many people want to make improvements to their homes but are curtailed by their budgets and increases in the cost of living. “Municipalities are no different, and it’s always a balancing act between what we want to do and what we can afford,” said the chair of the Select Board in Hampden, adding that budgetary decisions are determined by residents at town meetings.

He noted that one way to raise additional revenue is to attract new businesses, but Hampden’s ability to do so is limited by its lack of town water and sewer facilities. However, town officials and employees are working diligently to find ways to increase services and make infrastructure improvements without burdening the taxpayers.

Flynn said this is important because Hampden is a small town with a number of significant financial obligations, which include payments on a $2 million bond taken out to improve its roads over a five-year period, and approximately $8 million owed as the town’s share of the new $67.4 million Minnechaug Regional High School that opened two years ago and serves students from Hampden and Wilbraham.

“The payments for the school will be spread out over 30 years, but it’s a pretty big bill to pay,” Flynn said. “However, we are continually looking to reduce costs through grants and programs, including those offered by the state and federal government and the Pioneer Valley Planning Commission. As a result, we are able to continue to improve the town while lightening the burden of the cost to the taxpayers, who are our friends and neighbors.”

Jane Budynkiewicz agrees. “The school department has a grant writer, but the town does not, so we take time out from our normal schedules to fit this in,” said the Board of Health coordinator. “I try my hardest to get anything that will help the people in this town. They put their faith in me, so I constantly work to find something, bigger, better, and more helpful.”

Over the past year, proactive measures by the Select Board have led to a number of initiatives, which include two solar-energy projects on town-owed property that have the potential to generate income while reducing Hampden’s electric bill.

Flynn said the selectmen and the energy company Soltage are currently in negotiations, with the shared goal of building solar-collection systems on the town’s capped landfill and the roof of Thornton Burgess Middle School.

Seeds for the projects were sown last year when several companies expressed interest in building solar facilities in Hampden. The proposals led the selectmen to schedule meetings with officials from other communities that have small-scale solar-electricity systems on publicly owned land, and it soon became clear that there were economic benefits with few drawbacks.

Flynn said Hampden’s landfill is an ideal location for a solar-collecting station, which fits in perfectly with the vision selectmen had for the property years ago when it was capped. “It was repurposed to allow the land to generate income; a piece of the property is being leased for a cell-phone tower, but we wanted to find a way to use the large, grassy area on the site to bring in revenue while keeping our overhead to a minimum and limiting the impact on our residents,” he noted, adding that, in addition to generating income, the Select Board hopes the cost of running the town’s streetlights might be mitigated because the line item constitutes Hampden’s largest electric expense.

In addition to these public projects, requests to install solar stations on private property are on the rise. Several weeks ago, construction began on a 3.2-megawatt, photovoltaic electricity-generating facility at the privately owned Kibbe Farm gravel pit on 229 Somers Road. The property is being leased by Minnechaug Solar, LLC (formerly known as Soltas Holdings, LLC).

And earlier this month, a special permit was granted to Stephen Andwood that will allow him to use a portion of a lot he owns for a solar-energy facility that will be built by solar-solutions provider Heliovaas.

“A proposal for a fifth solar project, which would also be built on private property, was presented to the board at our Oct. 6 meeting,” Flynn said. “The number of solar projects taking place in Hampden over the past year has exploded.”

An increase in tax revenue is also expected when a major renovation of Hampden Country Club is complete. The club was sold at auction in 2012 for $1.4 million, and since that time, the golf course and pro shop have been redesigned, and a $9 million banquet facility is under construction that will hold more than 200 people.

Flynn cited yet another project that will add to the tax coffers. “Last year, National Grid started work on a new substation off of Allen Street which is almost finished. We anticipate that all of these projects will increase our tax revenue by $300,000, which is a significant amount for Hampden.”

Flynn said community spirit is a cornerstone of life in Hampden. He told BusinessWest that it can be seen and felt in places such as Village Food Mart, where friends and neighbors inadvertently meet and enjoy conversations while they tend to the daily tasks of living.

“People who live here fall in love with the town,” he said as he extolled Hampden’s attributes and noted that some families have made it their home for more than a century.

“Many of the people who serve in our town government have family members who held similar positions, and saw how rewarding these roles can be,” Flynn noted, adding that his father and great-grandfather were long-term selectmen, and the Town Hall, which is getting a facelift thanks to Community Preservation Act funds, was donated to the town by a Hampden family.

Senior Center Director Becky Moriarty agrees that community spirit flourishes in all segments of the population. “Hampden is an amazing town, and I have been very fortunate to work here for 12 years. The Senior Center community is like one big family, and our building is like a home away from home,” she said.

However, she concurs that efforts to procure funding for services and amenities to improve the lives of residents has to be aggressive and ongoing in order for the town to continue to offer the lifestyle residents enjoy today.

“The budget we receive from the town is not always enough, so supplementing it with grant funds is how we fill in the financial gaps,” Moriarty explained, as she listed grants the senior center received within the past year.

They include an annual Formula Grant from the Executive Office of Elder Affairs that pays for a part-time activities coordinator; Title IIIB grant funding from Greater Springfield Senior Services, which pays for a portion of the outreach coordinator’s salary; a grant from the Hampden Cultural Council that was used to provide entertainment at a celebratory event; and a grant from the Mass. Assoc. of Councils on Aging that allowed the center to offer an Aging Mastery Program, which is a health and wellness initiative.

Budynkiewicz cited other examples of how the town benefits from grants and outside funding.

“Two years ago, the Hampden Health Coalition purchased a trailer for the Board of Health that costs $5,234, and we were able to fill it with emergency-preparedness equipment, which includes cots, blankets, pillows, medical supplies, and personal-care kits, with state funding,” she noted. “As a result, if we have a major power outage, I can call the fire or police department and have them tow the trailer to a designated site and have a shelter equipped in less than an hour.”

She also just received news that an application for a $1,400 grant for the transfer station was approved by the Mass. Dept. of Environmental Protection. “We want to use it to put up new signage and look into recycling bins,” she said.

Cost-saving measures are also adopted by every town department whenever there is opportunity to do so. “We take advantage of discount pricing for natural gas and gasoline by participating in a county-wide contract,” Flynn said, while the Select Board belongs to a regional group that includes representatives from Wilbraham, East Longmeadow, Longmeadow, and Ludlow, who share ideas to promote growth, increase revenue, and reduce the price tag associated with running their towns.

Graybar Electric recently contacted town officials and offered to help obtain energy-efficient lightbulbs through a Department of Energy Resources grant program. “We were approved for 565 free, energy-efficient lamps for the Town Hall and anticipate they will save us $525 a year,” said Select Board Administrative Assistant Pamela Courtney.

She agrees that town employees are very dedicated, and cited a few examples of their laudatory commitment.

“Eva Wiseman, who is the town clerk and tax collector, is always looking for ways to reduce costs in her office, which she achieves by doing much of the work herself, rather than contracting it out. And the Board of Health coordinator [Budynkiewicz] employs every tactic she can to get the best prices on anything that needs to be purchased for the town and continually goes above and beyond to work for the 5,000-plus bosses who employ all of us on a daily basis,” Courtney said, referring to the residents.

“In fact, the employees of the town of Hampden always do more than is expected from them, particularly when it comes to providing good service and saving money,” she went on. “We live in the town, so it behooves us to work hard to manage our budgets well.”

Flynn said residential growth is beginning again after being stalled by the economy for years, and two homes in a 20-lot subdivision were sold last year. A new church is also planned, and the wide range of benefits the community offers is expected to continue.

“We don’t just give lip service to the idea of doing more,” he said. “We believe we have the best roads in the area and great schools, which all adds up to a source of tremendous community pride.”