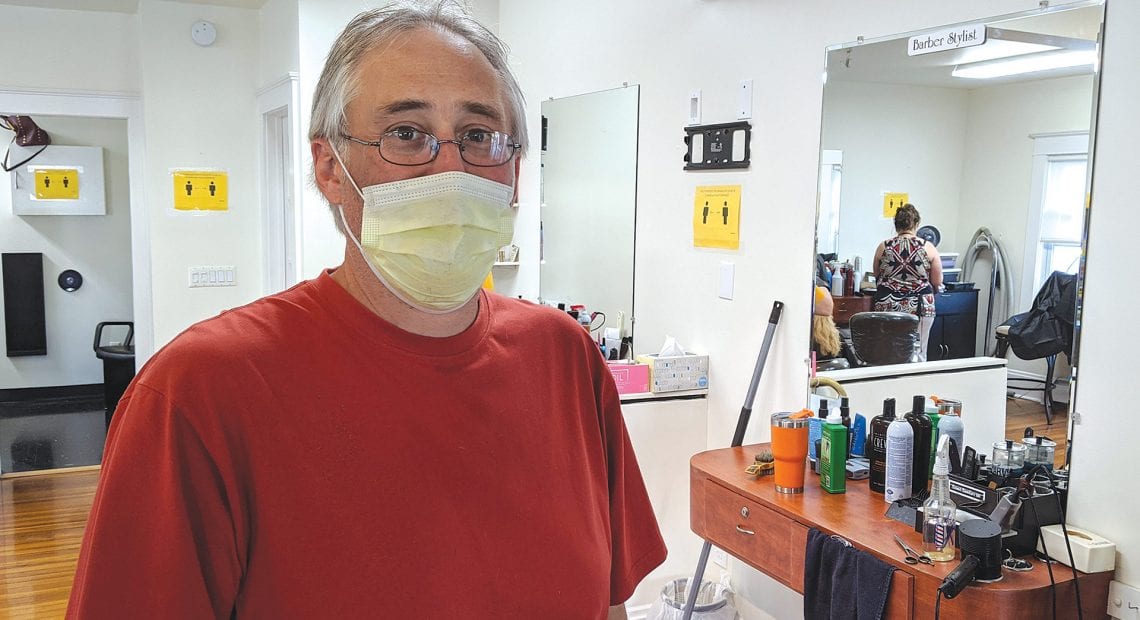 Salon Owner Says He Missed the Relationships the Most 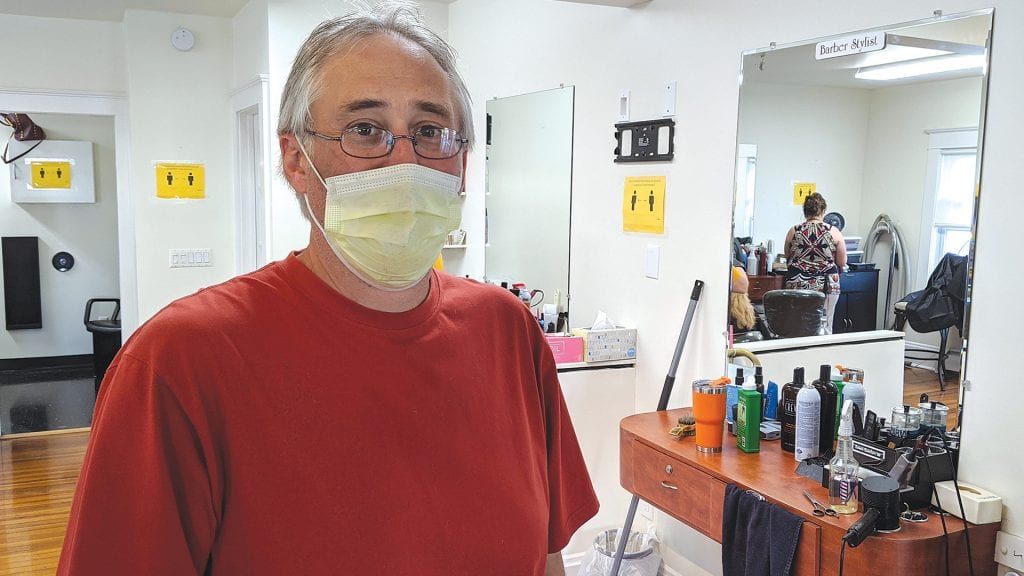 Bernie Gelinas said his appointment book has been full, but he can’t see as many customers in one day as he used to because of strict sanitizing rules.

It may be a song lyric and a cliché, but for Bernie Gelinas, the waiting really was the hardest part.

“After we closed in March, it was hard because we really didn’t know what to expect — what the governor was going to say, and what we needed to do to reopen,” said Gelinas, owner of Cuts Plus, a small hair salon in South Hadley. “From that aspect, it was frustrating, so it was nice when he came out said they’re going to open us up.”

The nine-week closure was, in one sense, an opportunity to take on projects that had been back-burnered — a common story we’ve heard from other business owners deemed, fairly or unfairly, non-essential during the pandemic.

“While we were closed, we took advantage — we painted, we had some things done to the shop we wouldn’t have been able to do, kind of update it a little bit, because the shop is basically open six or seven days a week,” he explained. “We tried to use the time as effectively as we could.”

Gelinas wasn’t the only one affected, of course — three full-time stylists and two part-timers in his salon were out of work, too, and while he was able to access a tiny piece of the federal stimulus, it wasn’t nearly enough to make up for the lost weeks. So May 18 — the day Gov. Charlie Baker said salons could open the following Monday — was a good day.

“We got the news like everyone else,” he said. “We watched the governor’s press conference online. On our time off, I listened to his briefings every afternoon and tried to read into what he had to say. And when we learned we were going to reopen, we had a week to somewhat prepare.”

“The big test will be in three or four weeks, once we’re caught up, to see where business goes from there. We’ll see at that point how many clients we have back and how many are holding out. It’s a wait and see.”

And prepare he did. There’s no waiting area at Cuts Plus right now — the furniture is gone — because no one is allowed to wait; only one customer per stylist is allowed inside. The bathroom is closed off, too.

“We put reminders on the walls — that was part of the protocol, to post things to remind people to be aware of their surroundings; we complied with that,” he said. “And we took out the magazines and anything else that would encourage customers to touch things that other people touch. We realigned the shop as much as we could.”

Part of that realignment was moving one booth — typically used by one of the part-timers — to a different room, one normally used for nails, a service that salons can’t offer yet. “There’s more planning involved, more careful scheduling to have the minimum amount of people here,” he said — and keep as much distance between them as possible.

That doesn’t apply to the stylist and his or her customer, of course — no one’s cutting hair with six-foot-long scissors. That’s why everyone wears masks, and why Gelinas can’t trim facial hair, for the most part. He says working around the mask straps while trimming was an adjustment, especially since masks come in several different configurations, but he has adjusted.

When asked if he’s been busy, he offered a measured “yes, but no.”

Elaborating, he explained, “when we reopened, we had to spread people out — it takes longer in between customers to follow the protocol, which is fine because it’s for the safety of all. We’re always wiping down things, and every three to five haircuts, I’ve got to take everything out and sanitize the whole station. I sanitize the doorknobs throughout the day, wipe down any common areas, wipe down the tables.”

At the same time, a good deal of his customer base has been clamoring for haircuts after more than two months away, so his schedule has been packed.

“We’re trying to get people in and take care of them and get them back on track,” he told BusinessWest. “The big test will be in three or four weeks, once we’re caught up, to see where business goes from there. We’ll see at that point how many clients we have back and how many are holding out. It’s a wait and see.”

That’s because not everyone has called back, and older customers in particular may be hesitant to sit in the chair. “That’s perfectly sensible,” he noted.

That said, customers have been “phenomenal” when it comes to following the new guidelines. And they’ve made Gelinas consider what he was missing during the weeks when he couldn’t cut hair.

“The beauty of coming back to work is you realize all the relationships you build throughout the year. You miss those people, and when you finally see them and talk to them, you realize that’s what this business is all about — it’s not just giving haircuts, but more the one-on-one. It’s more than a professional relationship; it’s very personal. You kind of miss that.”

In fact, it made him realize that, when he eventually retires from his full schedule, he’ll still want to cut hair.

“So it was a learning experience for me also. Yes, we used those weeks as best as we could, to do different projects. But it was a mental project, too — to kind of answer the question of what the future will bring. It’s one of those things where you don’t miss it until it’s gone.” 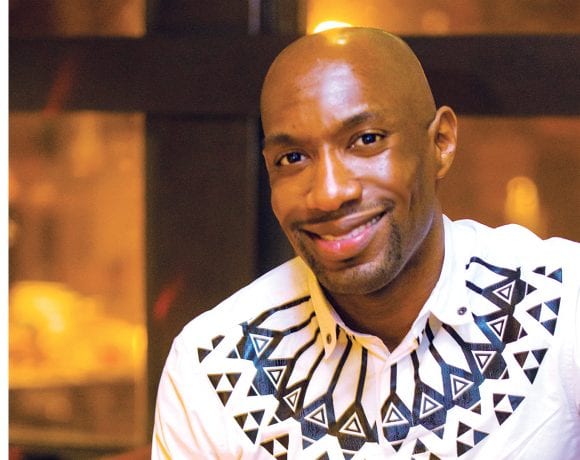 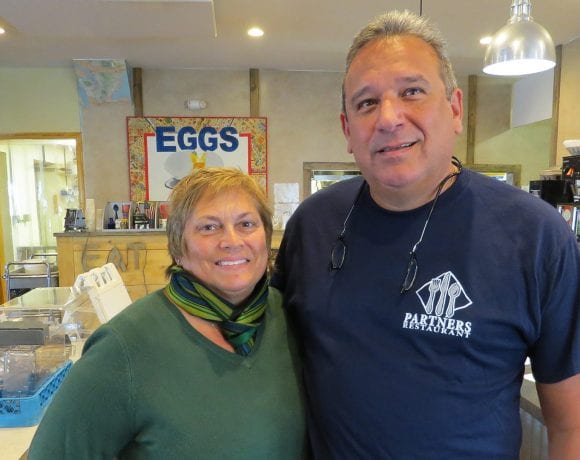 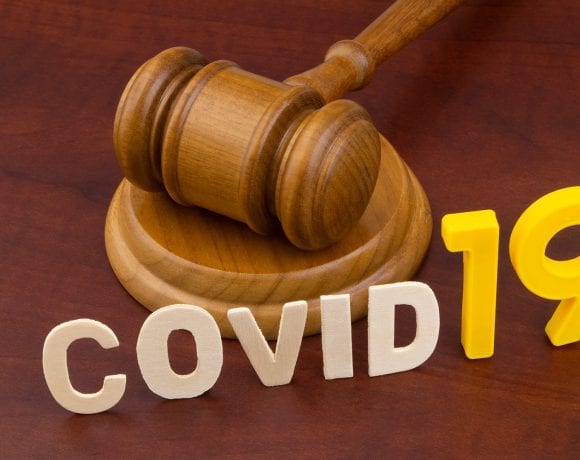