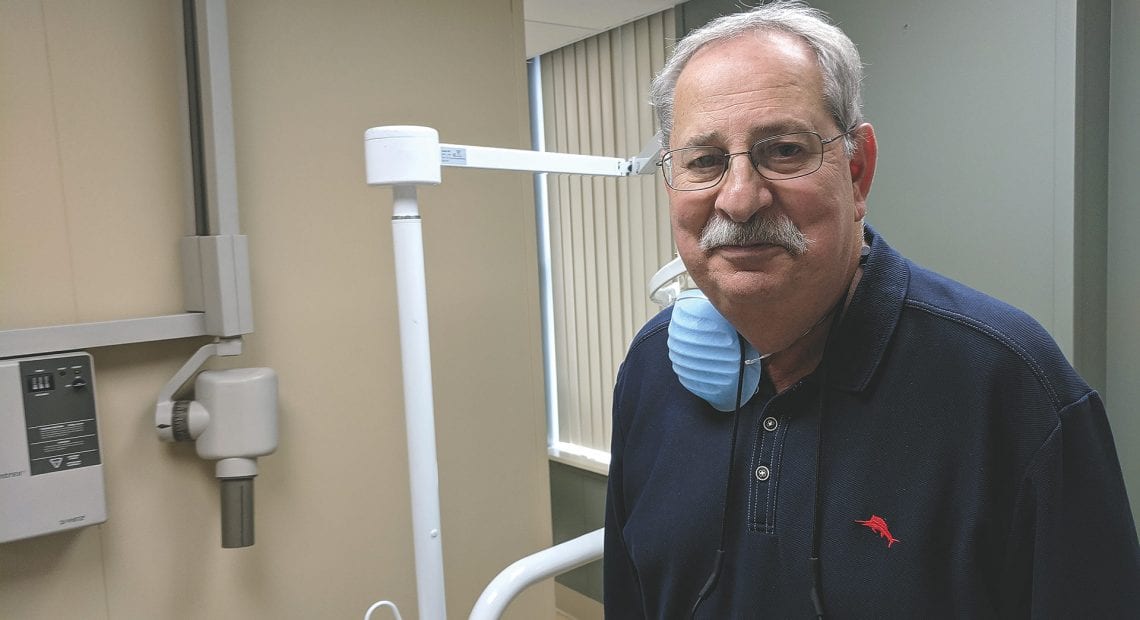 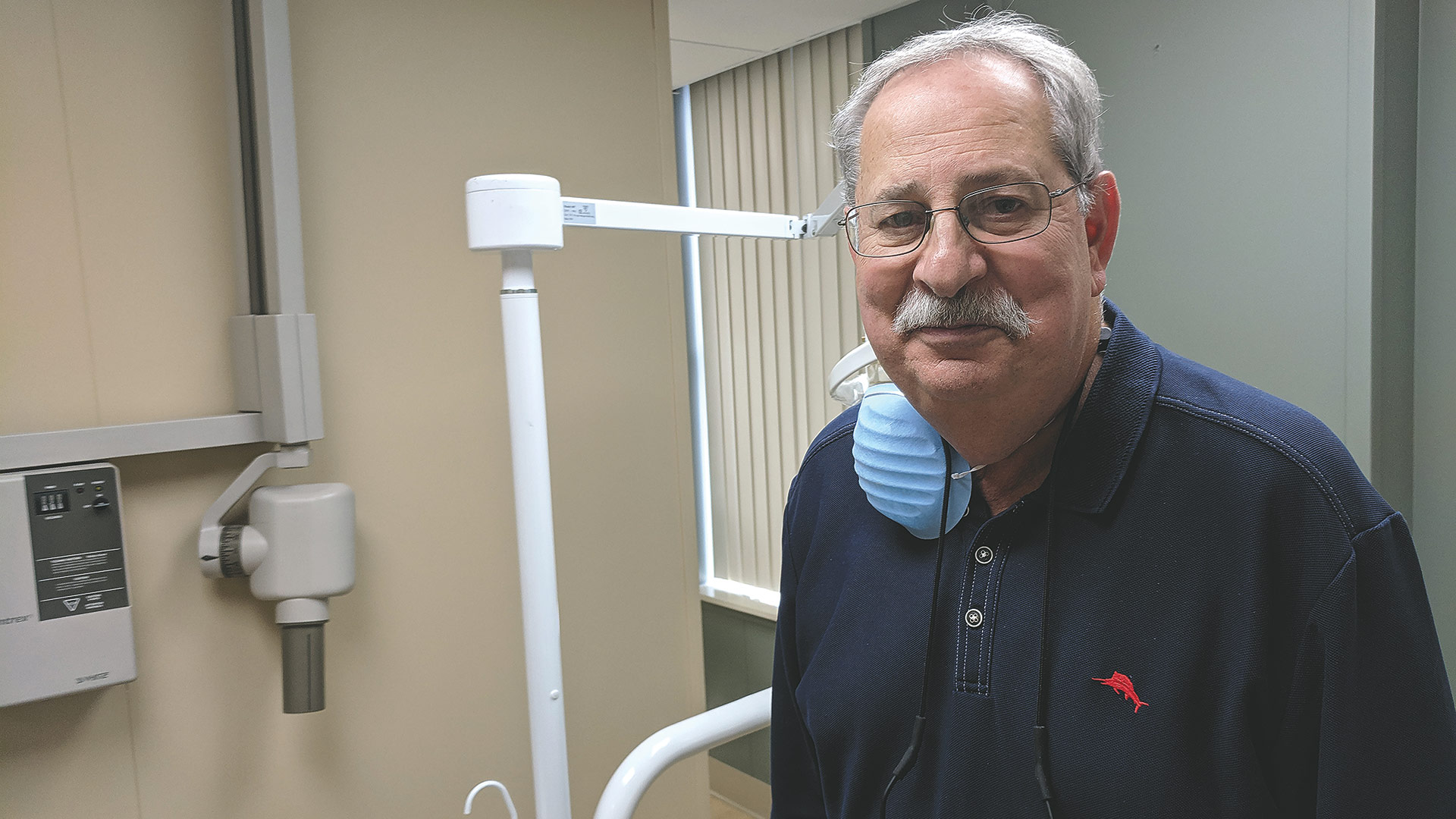 Dr. David Hirsh says mini dental implants can hold a bridge or crowns in place without requiring surgery and months of recovery.

Early in his career, Dr. David Hirsh used to perform dental work for the then-Springfield Indians, and even back then, there was a clear generational divide among hockey players — one measured by how many teeth they had.

“Everybody used to talk about hockey players having no teeth,” he told BusinessWest. “But the young players grew up with helmets, facemasks, and mouthguards, and they came to the office here, and they had beautiful teeth. Their older counterparts would smile, and there would be nothing there.

“It was a matter of education,” he went on, comparing it to how today’s athletes have a better understanding of concussions for the same reason.

But that focus on education holds true among all dental patients, Hirsh added, not just athletes. Simply put, dentists are seeing people make it past their childhood and young adulthood with healthier teeth than in decades past. “We see a tremendous difference in the younger population, which is very satisfying.”

Since launching his practice in downtown Springfield in 1981 — he has expanded the Bridge Street office four times since then — Hirsh has seen plenty of change in the way care is delivered, particularly in the realm of implants, especially the mini implants he has become known for regionally (more on that later). But some of that change has to do with improving habits.

“We’re here to restore teeth and fix teeth and help patients smile and look good. But we would much rather get these people when they’re younger — meaning children or young adults — and guide them and help them to maintain their teeth,” he explained.

“There’s no fun in making someone a denture,” he went on. “There’s no fun in having to restore a full arch with implants. We do it because there’s a need. But that’s not the goal of dentistry. The goal of dentistry is clearly prevention. My goal has always been having a strong hygiene program, a strong prevention program, and helping guide people — and helping parents guide their children — to better oral health so they won’t have to be in a situation where they need a root canal, bridges, partials, dentures. Those things aren’t the goal. That’s not what we want.”

“There’s nothing more satisfying to me than to have a patient come in missing teeth, and they leave here with a beautiful smile, and they have tears in their eyes.”

But because there will always be a need for restorative dentistry, Hirsh — who practices with Dr. Kelly Soares under the umbrella of PeoplesDental — has taken advantage of plenty of innovations in the world of implants, with the goal of restoring not only teeth, but quality of life to patients with less recovery time than ever before.

When implants first came on the scene a half-century ago, Hirsh said, they were designed differently, and didn’t exclusively use titanium as they do today, so a membrane would form between the metal and the bone, causing the implants to loosen up.

“Today, every implant system is based on titanium technology — all of them,” he explained. “Titanium is the only metal that fuses directly to bone without forming a membrane around it.”

Implants are typically a surgical procedure, placed into exposed bone after the gums are opened up. “A hole is drilled, the implant is tapped in or screwed in very gently, and then the gums are sutured closed, and you have to wait anywhere from six to eight months in the lower jaw — four to six months in the upper — for that titanium implant to fuse with the bone.”

While traditional implants do a good job of anchoring crowns, bridges, and other structures over the long term, mini dental implants, or MDIs, have been a game changer for Hirsh’s practice.

They were first used in the ’90s and have been approved by the U.S. Food and Drug Administration for long-term use for fixed crowns and bridges and removable upper and lower dentures.

PeoplesDental in Springfield is now certified among a group known as Mini Dental Implants Centers of America — the only one, in fact, in a region that stretches from the Berkshires to Worcester, and from Vermont to Hartford. The organization is associated with the Shatkin Institute, the largest training center in America for MDIs.

“For reasons I don’t understand, mini implants in this area in New England are not widely utilized,” Hirsh told BusinessWest. “I think we’re a little slower than other areas of the country to experiment and do new things. When we have something that works, we don’t like to change. When traditional implants began in the late 1960s, early ’70s, the biggest negative voices were from dentists themselves — ‘you can’t put metal in somebody’s bone.’ Then, all of a sudden, by seeing what could be done, they came around.”

The same may soon happen with MDIs, he went on. “More people around the country are learning that minis are a very, very good alternative to traditional implants. The mini implants are not shorter, they’re just narrower; the largest minis today are equivalent to the thinnest traditional implants. The difference is basically the placement of them and what’s involved from a patient perspective.”

Most notably, no surgery is involved. Rather, the dentist makes a small hole through the gum tissue and into the bone, and screws the implant in.

“It gets its retention from the screwing effect, so you don’t have to wait six to eight months,” Hirsh explained. “That very day, you take an impression and make your final crown or bridge or whatever you’ll use it for.”

He likened the procedure to drilling a thin screw into a piece of wood. “You drill a pilot hole first, then put a screw in that’s a little bigger than the hole, so it bites into the wood. The same thing happens here, except it bites into the bone. It’s about half the cost, it’s less invasive, and there’s less chance of infection and the many types of sensitivity and soreness afterward because that usually comes from the cutting and the stitching.”

More important, however, is the impact of mini implants on patients’ quality of life, Hirsh said, particularly for those wearing lower dentures.

“Lower dentures float all over the place. Nobody’s ever happy with their lower denture. It sits on a ridge like a horseshoe, and their tongue hits it and lifts it up, and they use pastes and powders that are uncomfortable and taste bad. And at restaurants, they can only eat what their teeth permit them to eat.”

With mini implants, however, a dentist can place four implants into the arch and corresponding attachments into their denture, and the denture can snap into place that same day. When they are used to stabilize upper dentures, the palate portion of the denture can be cut away, which makes it more comfortable and improves the taste of food.

“They can take it out to clean it, but it’s not going to move around,” he said. “There’s no paste or powder, it’s cost-effective, and it changes their life. I’ve done commercials with patients who bite into apples or corn with dentures, and they feel it’s rock solid.”

In his earlier days, he explained, before dental insurance became more widely accessible, it was more common than today for families to avoid the dentist because of cost — or, if a tooth went bad, just opt for an extraction over a root canal.

“They were in a bad financial situation, or they weren’t educated to take care of their teeth, or a combination of both,” he told BusinessWest. “One tooth goes bad, and they need a root canal to save it, but they don’t want to spend the money, or don’t see the value in it. So they have that tooth extracted, and a year later, another one hurts, and it’s the same thing. All of a sudden, you’re looking at half a mouth of teeth, and half a mouth can’t do the work of a full mouth.”

Sometimes it’s a long process — decades, perhaps — to get to that point, or perhaps something happened suddenly, like a car accident or being struck in the teeth, but without insurance, it can be a challenge for families to get the work they need, at a time when procedures have become less invasive, in many cases, and more cutting-edge.

That’s changing, he said, not just on the insurance front, but as the result of decades of education and advertising the benefits of healthy oral habits. “When I see today’s young people, I don’t think, in the future, we’re going to see the amount of restorative need we see today.”

Until then, Hirsh aims to continue fixing what he can and helping young people forge a path to a future without implants. He’s scaled back to three days a week as he approaches retirement, but says the leisure activities of those coming years may not make him as happy as his current work does.

“There’s nothing more satisfying to me than to have a patient come in missing teeth, and they leave here with a beautiful smile, and they have tears in their eyes,” he said. “I’m not a golfer, but I fully understand hitting a great golf shot is very satisfying — but no one can convince me it’s as satisfying as doing something like that for a patient.” 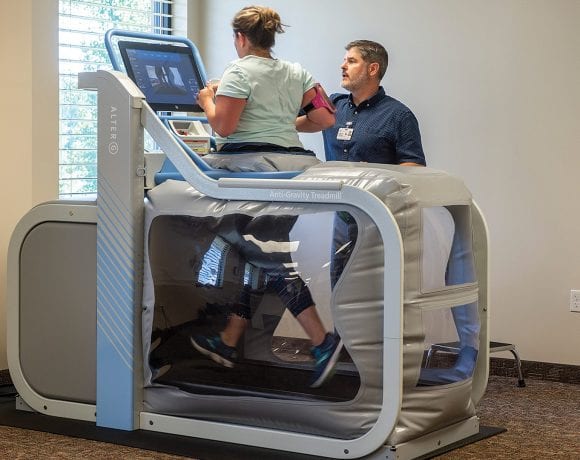