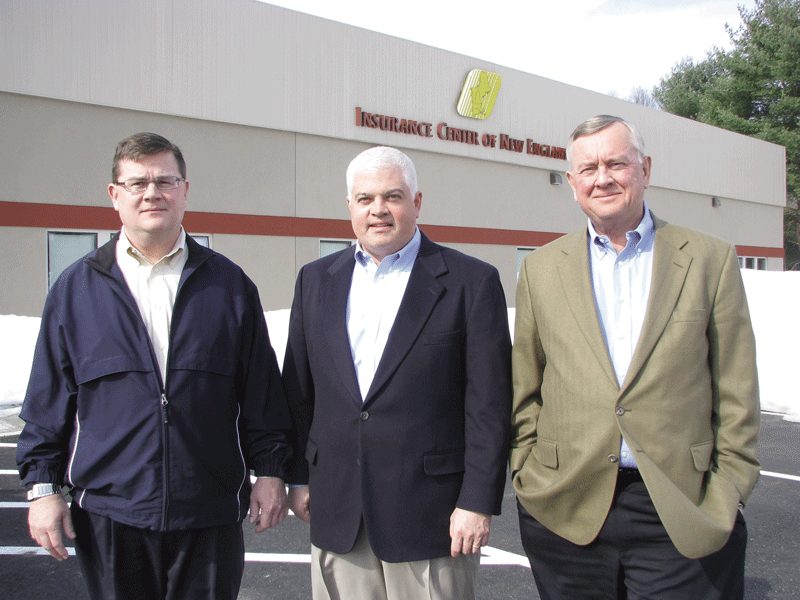 Filling in the Canvas From left, Dave Florian, Bill Trudeau, and Dean Florian, stand near the front entrance of the new headquarters for Insurance Center of New England.

When Insurance Center of New England commenced a search for new headquarters space last year, the focus soon centered on the former Oaks banquet facility on Suffield Street in Agawam. The site provided ample parking, room to grow, space to expand a health-and-wellness initiative, and even acreage on which to start an employee-managed vegetable garden. In short, this was an exercise in stretching the imagination — and the limits of creative space utilization.

Bill Trudeau was pointing to the spots where the treadmills, elliptical machines, and spinning bikes would go, and conjecturing on what the room would look and feel like when fully ready for occupancy.
“It’s not going to be the Y … it’s not going to be LA Fitness,” he said of the workout room still taking shape at the new headquarters for Insurance Center of New England. “But it’s going to be really nice, a big step up for us.”
Those same words would be appropriate for just about every aspect of ICNE’s new home — from the spacious conference room, decorated with modern art and equipped for videoconferencing, to the locker rooms across the hall from the gym, to the inviting front lobby — that was creatively carved out of the former Oaks banquet facility on Suffield Street in Agawam, with some 5,000 square feet left over to lease out to prospective tenants.
The company moved in last month, completing a project that had been in the works for some time, but that moved forward in earnest when the Oaks property quietly, and unofficially, went on the market early in 2010.
As Trudeau, the company’s president, explained, ICNE had been fairly content in its now-former home at 246 Park St. in West Springfield, where it had leased up to 12,000 square feet since 1987. But the company’s principals had essentially decided a few years ago that they would much rather own their space than lease.
After efforts to acquire the Park Street property were unsuccessful, the company started looking at a host of other options, said CEO Dean Florian. These actually included other leasing alternatives — space in some downtown Springfield office towers was looked at — but mostly focused on new building or renovation possibilities.
And there were not many viable options, he continued, adding that the company did consider a building lot at the end of Route 57 in Agawam. But the search essentially ended when Trudeau, Florian, and his brother, Dave, the company’s executive vice president and CFO, toured the Oaks property in early 2010 and started considering the myriad possibilities it presented.
“This building offered us a lot of flexibility,” said Dave Florian. “We had what amounted to a blank canvas we could fill in as we wanted. And working on that canvas has been a lot of fun.”

Space Exploration
Creating this broad work of art — meaning reuse of the building and adjoining five acres, including parking for several hundred cars — has been a nine-month project that has allowed ICNE executives, working in collaboration with Springfield-based Corporate Designs, architect Roy Brown, and office furniture firm the Lexington Group, to stretch their collective imaginations.
“There were literally hundreds of decisions to be made,” said Trudeau, “about where people were going to sit, which offices would go where, what colors would be used on the walls, the tiling in the bathrooms. Our designers always gave us plenty of options, and we always worked with the goal of providing an attractive environment for employees and customers.”
Outside, the company has removed the Oaks’ Greek-inspired look — complete with columns and decorative concrete lions — and put in a new entrance and new signage. Meanwhile, large stretches of asphalt have been torn up and replaced with green spaces, including a vegetable garden to be tended by employees now given one more reason to eagerly await the arrival of spring.
Inside, everything in the former kitchen area has been removed, and that section is now part of the space that will be leased out. Meanwhile, the spacious former banquet area, capable of sitting some 400 people, has been apportioned and outfitted to maximize efficiency and customer service, said Trudeau, while also providing a comfortable work area that addresses current trends in the modern workplace.
This includes everything from ergonomics and ‘green’ design elements to the colors on the walls (earth tones chosen to enhance livability and productivity) to the gym, which is in keeping with a company-wide focus on improving employee health and well-being.
Indeed, when BusinessWest last visited ICNE’s Park Street facility, it was to hear about a comprehensive initiative — now part of the culture at the company — that involved everything from smoking-cessation efforts to an organized walking program to an ever-present bowl of fruit in the company’s kitchen.
The fruit is still available in what is now a larger kitchen, the smoking-cessation program continues to draw results, and the walks still happen, except now along a more-rural stretch with fewer traffic issues. But soon, the employees will have a workout area that Trudeau says is part of a larger campaign for ICNE to essentially practice what it preaches to its clients — that good employee health promotes greater productivity and also lowers the cost of insuring a workforce.
The gym is still a work in progress, with pieces of equipment still arriving, but it is expected to be fully ready for use in a few weeks, said Trudeau, who counts himself among those who will be regular users.
And while getting into the business of operating a gym, sort of, ICNE is venturing into the real-estate sector as well, and is already marketing, in a quiet way, its available square footage.
Trudeau told BusinessWest that there are positives and negatives to being a landlord with space available at this time. The economy, while improved, is still in a recovery mode, he explained, adding that many business owners and managers are still being cautious about undertaking moves and expansions.
At the same time, though, many businesses that have been hunkering down for a years while the recession played itself out are now in a growth mode, and there is some pent-up demand for quality space. There is abundant supply for that demand, Trudeau acknowledged, adding quickly that ICNE believes it has the right product in the right place at the right time.
“There is a lot of office-space inventory on the market right now,” he acknowledged. “But this is a good location and attractive space; there are some good opportunities here.”

Room for Improvement
ICNE has slated an open house to showcase its new home on March 31.
By then, the large snowbanks now partially obscuring the view from Suffield Street will be gone or much lower in stature (one can only hope), and the gym will be fully outfitted.
There won’t be anything growing in the garden at that time, but the company didn’t want to wait until summer to show what it had done with its blank canvas, said Dave Florian, who is obviously proud of the way it’s been filled in.
“It took some imagination,” he said, looking at the building from the parking lot, “but we had plenty of that to work with.”

More Companies See the Benefits of Dogs in the Office