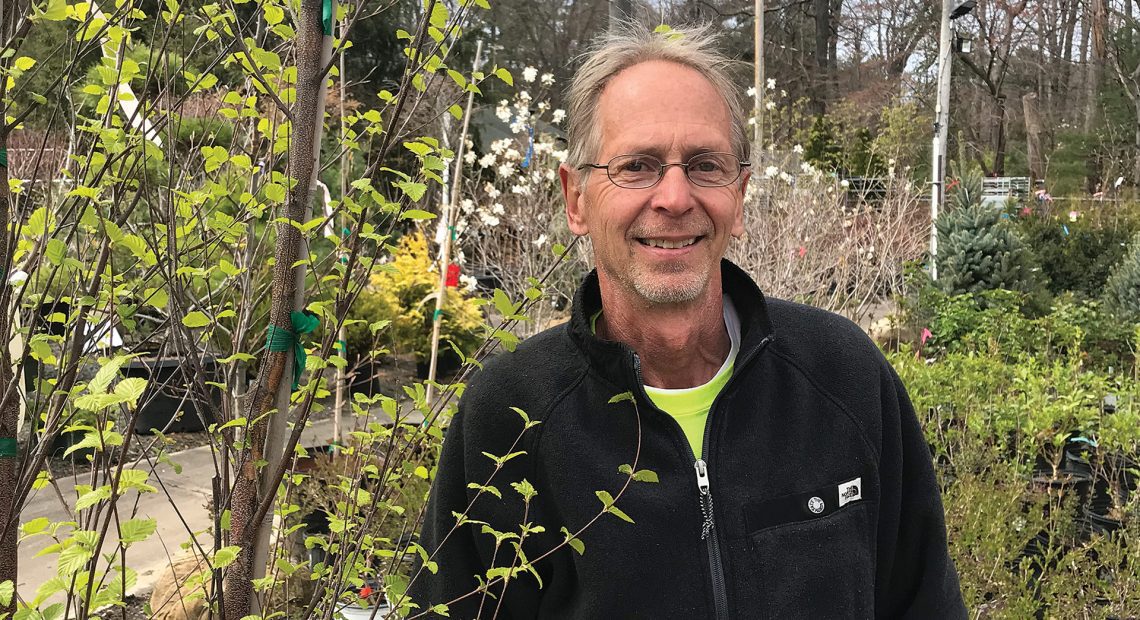 Lay of the Land 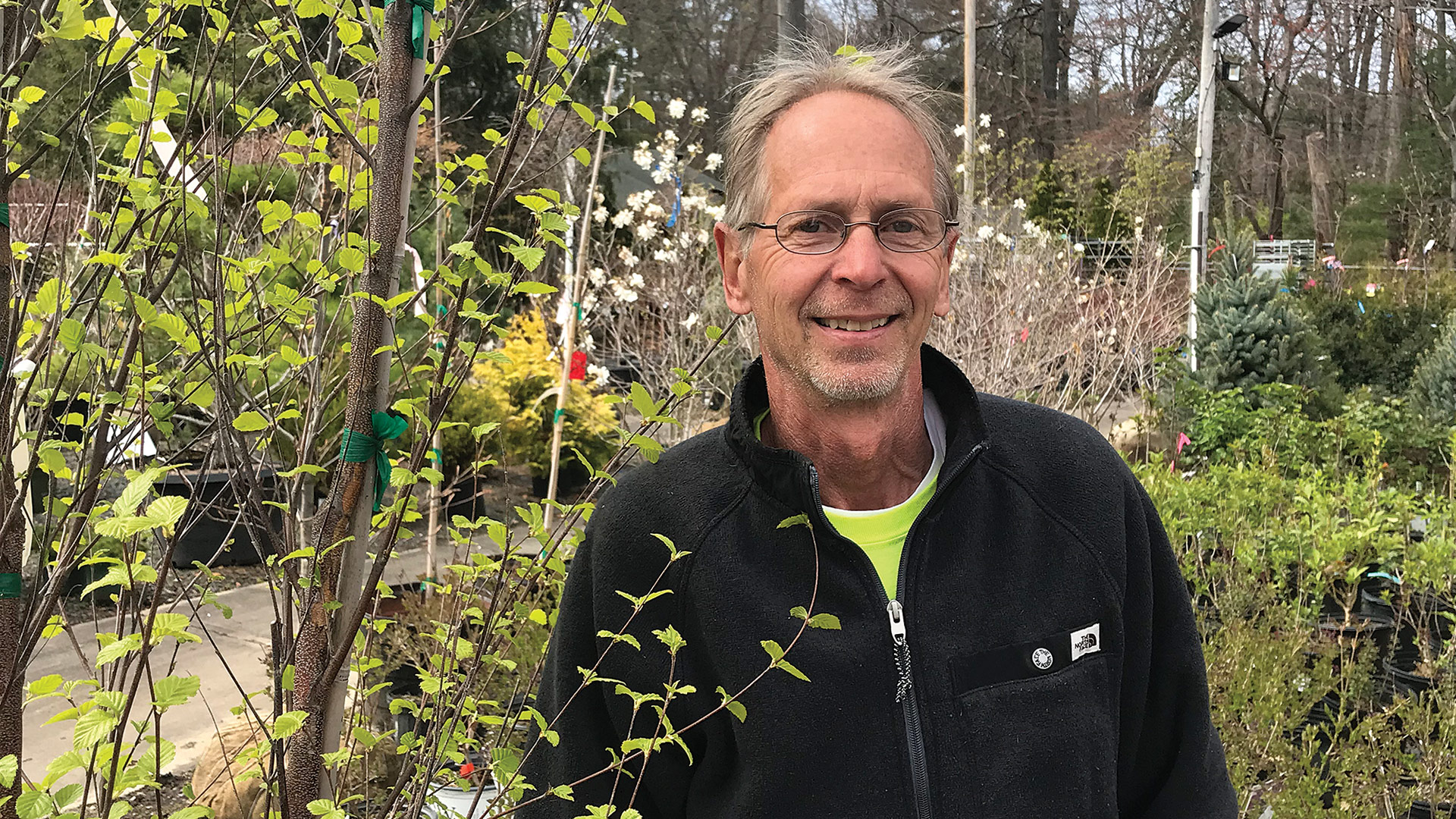 For area landscapers, the pandemic created a boom in business as consumers working at home and unable to go on vacations decided to improve their surroundings and invested accordingly. There is still some of that going on, but noticeably less, with consumers enjoying more spending options, while also experiencing considerable anxiety over sky-high inflation. While there is still plenty of work, landscapers confront a host of challenges, from workforce issues to shortages of materials to soaring gas prices.

The phones are ringing at landscaping companies this spring — but not at the same frenzied pace of the last two years. And that’s just one of many trends to watch as the calendar moves to mid-spring

Overall, consumers People are more cautious about spending their money this year, said Greg Omasta, president of Omasta Landscaping in Hadley, and, at the same time, they certainly have more spending options than they did in 2020 and even 2021.

“Those who have the money and want to improve their yard are still going to,” Omasta said. “For everyone who was on the fence about it … not so much.”

Steve Corrigan, president of Mountain View Landscapes and Lawncare in Chicopee, concurred with that assessment. He said that while his company has backlog of business through June, he’s not as confident about the rest of the year.

“We’ve had internal discussions that we don’t have as many leads compared to this time last year,” he told BusinessWest. “People are still requesting work but we’re wondering if we will be as busy as last year.”

Two years ago, the pandemic forced people to spend more time at home. Many looked at their outside surroundings and decided they needed to invest in their yards, in many cases using money that would normally go toward a vacation away from home. This created a huge boom for landscapers who could barely keep up with all the demand for their services.

“Now that people are able to travel again, it seems like the COVID spending is slowing down,” Omasta explained, adding that on top of leisure travel increasing and people returning to the workplace, landscapers are experiencing an unseasonably cold spring that brings with it other challenges.

“Every year is different,” said Dave Graziano, project manager of the landscape division of Graziano Gardens in East Longmeadow. “If you talk with any independent businessperson there is some worry this year about what’s coming.”

That worry usually involves how to handle increased business costs, finding workers, and managing supply chain issues with various products. And landscapers are certainly having to cope with all those issues and more.

“Those who have the money and want to improve their yard are still going to. For everyone who was on the fence about it … not so much.”

Indeed, all the landscapers we spoke with have commercial clients as well as residential customers. Rachel Loeffler, landscape architect and principal with Berkshire Design Group in Northampton, said there is often competition, if one can call it that, between commercial and residential when supplies are short.

“Sourcing for plants can be challenging in normal times,” Loeffler said. “Now contractors check with five or six nurseries when they would normally go to one.” This scramble for plants often means finding substitutes.

As a landscape architect, Loeffler often recommends using products like cedar wood that will remain durable for years to come. When cedar became, in her words “extremely expensive” it changed the conversation with clients. 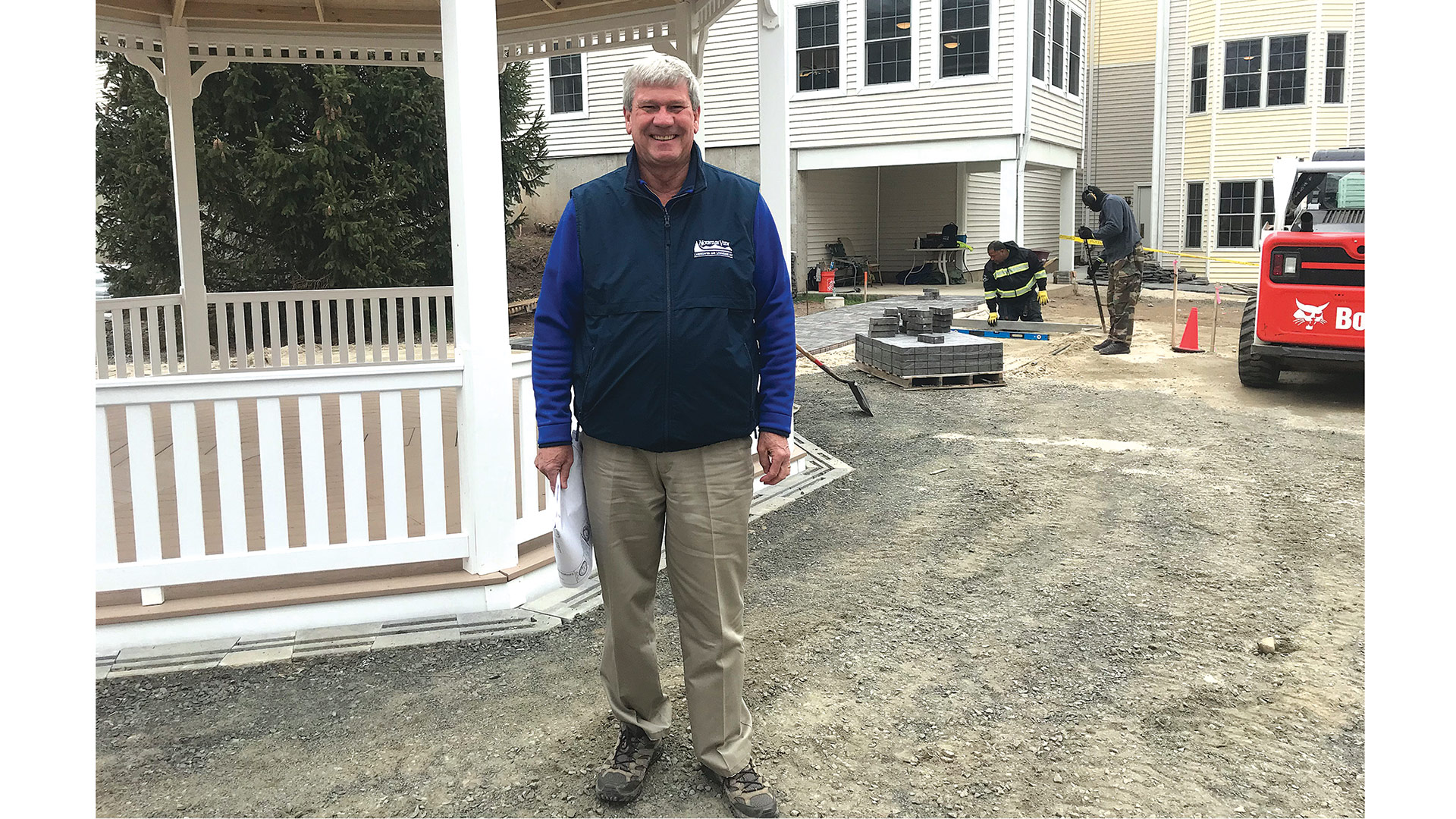 Steve Corrigan leads his crew as they install pavers at Loomis Village in South Hadley, one of many current projects for his company, Mountain View Landscapes and Lawncare.

“They had to go back and figure out how to build something that was durable and sustainable, but would also fit their budget,” Loeffler said.

Even world events affect landscaping materials. Omasta pointed out that many of the minerals found in fertilizers come from Russia. “So, some of our supply chain issues are based on what’s going on in the Ukraine.”

For this issue and its focus on landscaping and home improvement, BusinessWest talked with several business owners and managers in this sector. These discussions revealed the full breadth of challenges facing these companies — as well as the ample opportunities for continued growth.

Omasta told BusinessWest that, while it’s getting a little easier to find products — with the accent on little — items are coming in at premium prices that are generally 30% to 50% higher than last year.

But finding some products and materials remains a challenge, and the shortages result from a variety of reasons.

As just one example, Both Graziano and Omasta noted the difficulty in finding large evergreens and other large-caliber trees. And Loeffler said the recession of 2008 is the reason why it’s difficult to find such trees now.

“The trees that are available now were cultivated some 10 to 15 years prior,” Loeffler said. “In 2008, many nurseries cut back on their normal planting because of a big drop in demand.”

Overall, tree shortages and rising prices of everything from lawn-care products to bricks are just some of the challenges facing landscapers.

Indeed, on the commercial side of the ledger at Mountain View, Corrigan said his crews are working on several projects in Eastern Mass for parks, playgrounds, and athletic fields. While travelling up to an hour and a half from his home base in Chicopee is a common practice, fuel prices are forcing Corrigan to refigure what vehicles he sends to specific jobs.

“Our crew trucks use a lot of fuel so we leave them at the jobsite and go back and forth with different vehicles,” said Corrigan, adding that he’s looking to conserve whenever and wherever he can, because the numbers are so staggering.

With more than 40 vehicles in the company’s fleet, costs can add up quickly. A newer vehicle might offer better gas mileage — if you can get one, that is.

“We placed an order for three new vehicles back in December,” said Corrigan. “And we won’t see them until July or August.”

Meanwhile, finding enough labor to get the job done remains a challenge.

Corrigan said his company has 95 people on the payroll and he could easily add another 10 — if he could find them. “Just before COVID, we hired a full-time recruiter, because even then we were having trouble finding help,” he noted, adding that the landscaping sector tends to attract young, entry-level people.

Many candidates get disqualified for failing their drug screen or for bad driving records, he went on, adding that he remains optimistic about the labor front. “We’ll get through it, one person at a time.”

Staffing has remained steady for Omasta Landscaping, thanks to a core group that has been with the company for several years. While landscape construction jobs remain hard to fill, Omasta said he had the opposite experience when hiring for clerical and office jobs.

“We took out ads for office people and the response has been tremendous,” Omasta said. “It seems there are people in the job search right now, whether it’s a career change or looking for a different job.”

While coping with these day-to-day issues and challengers, landscapers are also responding to longer-term trends, many of them involving the environment, cost-effectiveness, or both at the same time. 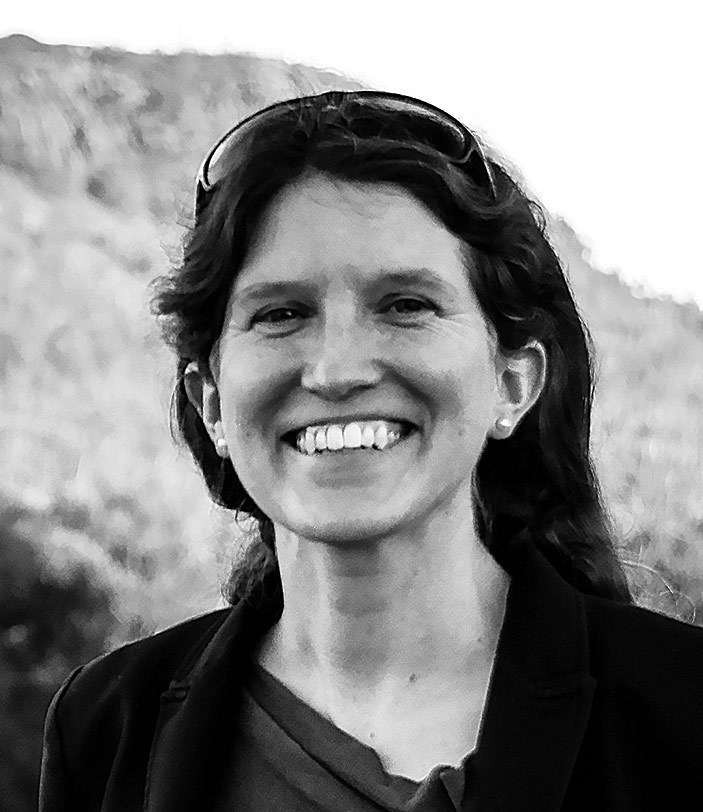 Rachel Loeffler says there is often competition between commercial and residential customers when supplies of certain products are short.

Loeffler told BuisnessWest she is doing more “lifecycle-costing” for projects. With this method, she will evaluate the installation of two similar materials — for example granite curbing vs. concrete curbing.

“We look at initial upfront cost, how long before each needs to be replaced, and then the cost over 100 years … and it’s crazy,” said Loeffler. “While granite is more expensive at the onset, over a 100-year period it’s significantly cheaper.”

She explained that concrete curbing has a useful life of about 15-20 years, so any time the asphalt paving is replaced, a new concrete curb will need to be built. With granite, a bucket loader can pick up the curbing and reset it each time the area is paved.

Loeffler admits most people don’t get excited about curbing, and she understands that project managers may opt to save money in their budget by using concrete, though granite proves to be a less expensive choice over the long term.

In a similar vein, Corrigan said changes are happening with the safety surfaces on new playground construction. For many years, landscapers have covered the areas around playground equipment with a thick installation of wood chips. The specs now call for poured in place rubber surfacing.

“It can cost four to five times more than wood chips, but project owners want it because the rubber works better from a safety perspective and they don’t have to go back every year to dress off the wood chips,”Corrigan said. The two-part process involves a base mat with a colored surface on top. In order to meet safety requirements, the rubber surface goes through a series of tests that mimic children falling on it.

Getting the Real Dirt

Looking at the proverbial big picture, Omasta said he understands that people don’t think about landscaping on cold, raw spring days, and there have been quite a few of them lately. “Once we start seeing sunny 70-degree days, the phone will ring off the hook,” he said, expressing optimism that his company, and this sector, will continue to flourish in these challenging times.

Graziano concurred, noting that the cold and windy weather has kept early customers from browsing at the garden center and from booking landscaping services.

“We’ve had a little slower April, but most likely May and June will be crazy — it’s the nature of the business,” he said, adding that nature, meaning Mother Nature, is just one of many issues to be confronted during what will likely be a different kind of year. 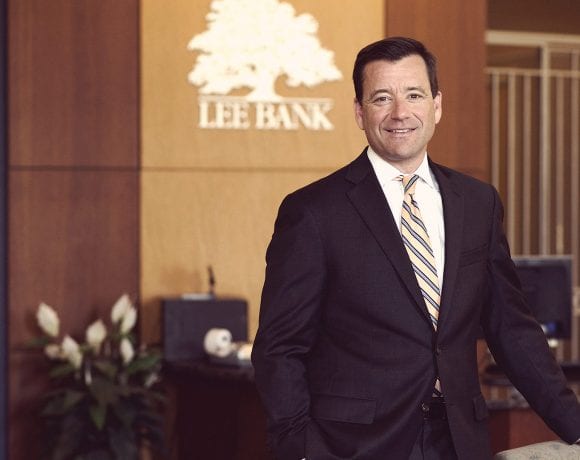 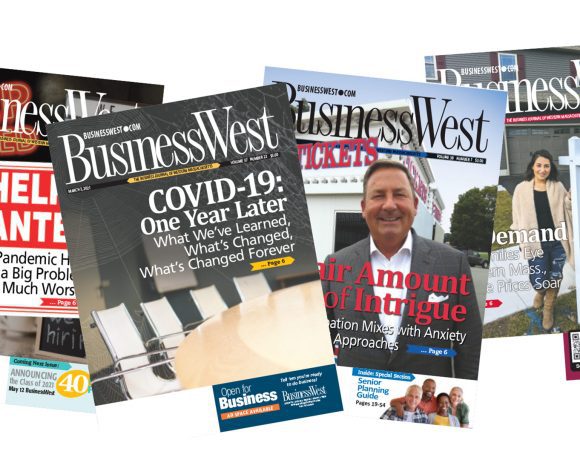 COVID and Its Many Side Effects Dominate the Headlines