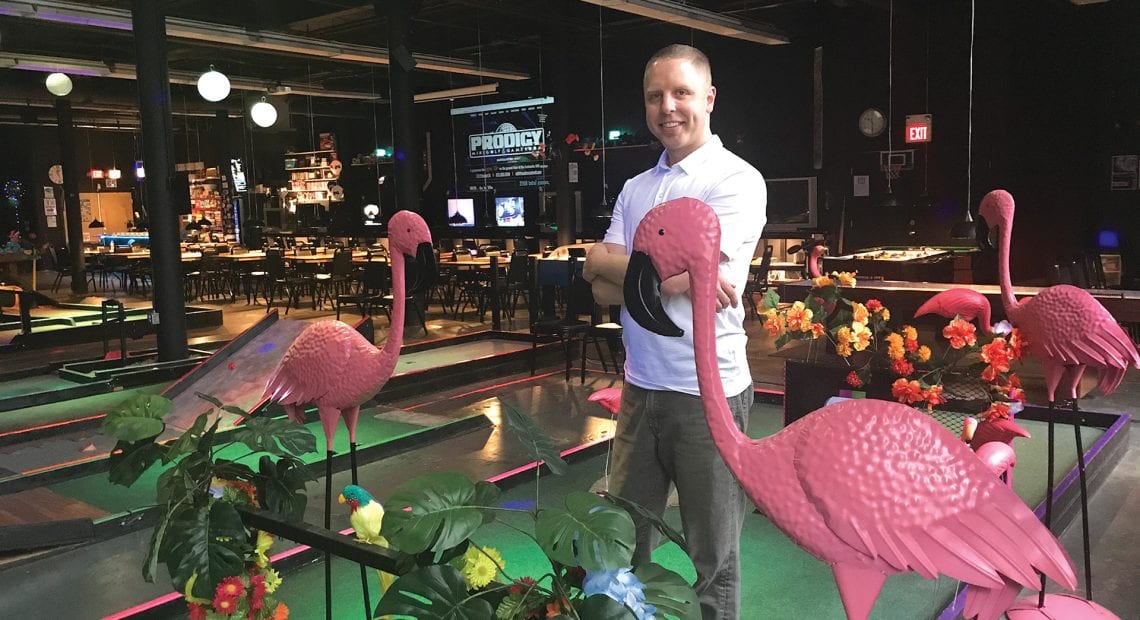 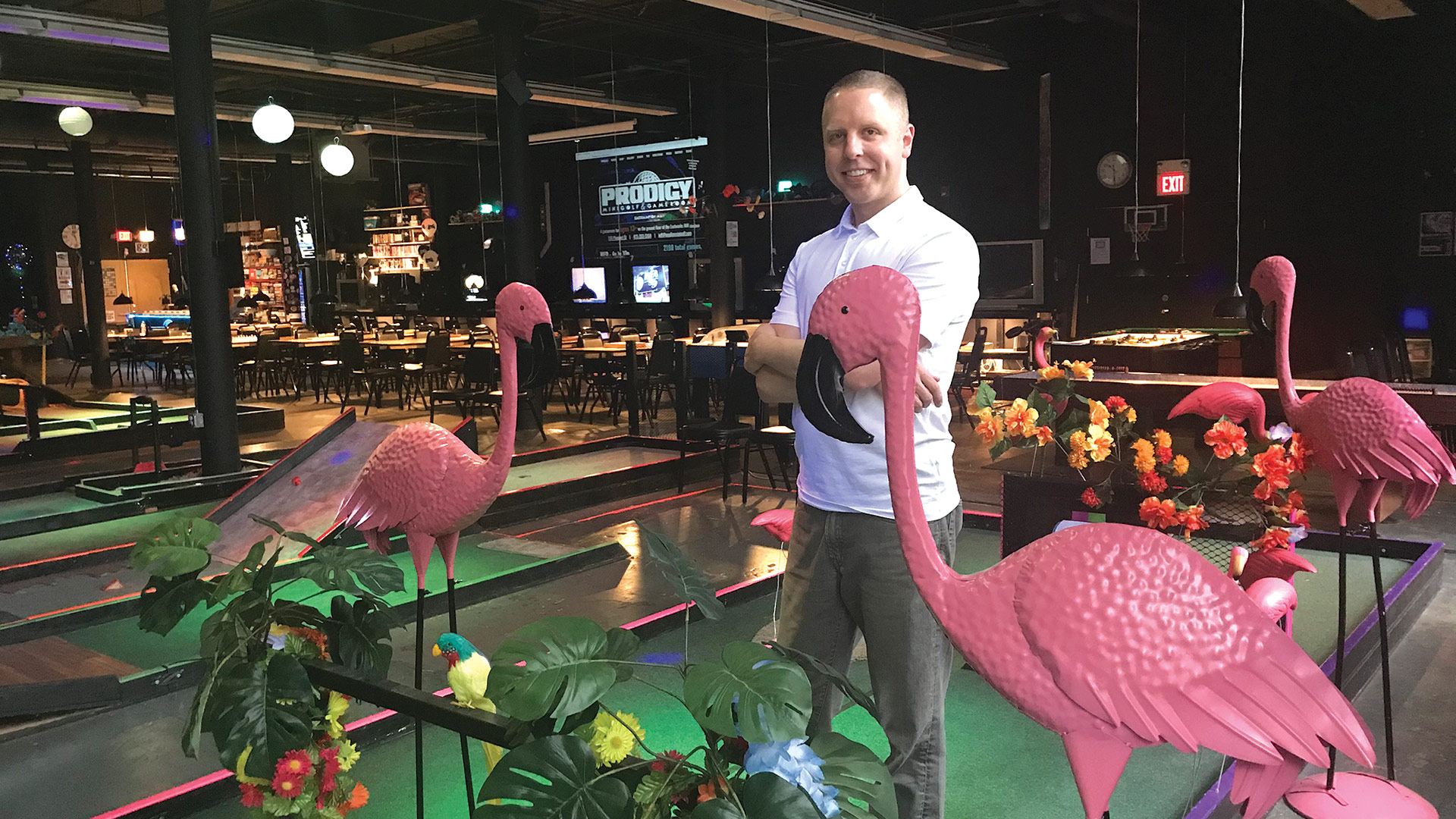 Jeff Bujak says he designed the mini-golf course to challenge everyone who plays it.

When game designers evaluate a new concept, one of the most important considerations is for the game to deliver a fun and different experience every time it’s played.

“I want folks to view the experience at Prodigy as one where they haven’t had enough. I want people to say, ‘there are about 2,000 games I haven’t played yet, so I’m going to keep coming back.’”

Actually, there are currently 2,198 games available at Prodigy, and that’s one reason why the company website describes it as “a gamer’s wonderland.”

Located on the ground floor of the Eastworks mill complex, the 8,000-square-foot game room is the culmination of Bujak’s past experiences as a musician and game player, and his passion for creating things that didn’t exist before.

Originally from Syracuse, N.Y., he spent 15 years traveling the country as a solo keyboard player and as part of the band Somebody’s Closet. He moved to Northampton for its well-known music scene in 2004. Tired of life on the road and sleeping on people’s couches, he decided in 2015 that he’d had enough of life on the road and left music for what he called “a stable paycheck with daytime hours.”

While working in the IT department at Viability, a human-services provider in Northampton, Bujak had the idea of a business that featured a mini-golf course and board games. Meanwhile, around that same time, his wife opened Small Oven, a bakery in Easthampton.

“I could see that Easthampton had real positive energy for business, so I started telling bakery customers about my idea for an entertainment complex,” he recalled. When he presented his business plan to Will Bundy, owner of Eastworks, it proved to be a winning move.

“When I first met Jeff, I knew that Prodigy was going to happen at Eastworks,” Bundy said. “Eastworks is a community of creative and entrepreneurial businesses. Prodigy and its unique view on games and gaming is a perfect fit for us.”

The original proposal was for a mini-golf course and board-game room with no video games that would be called Analog. When Bujak saw how much space was available at Eastworks, he refined his idea and decided to offer more entertainment options. As a collector of video games and their consoles, he knew he could easily include those into the game room.

Most of the video-game offerings are on consoles like NES, Sega, and ColecoVision, which are no longer produced. Bujak has connected them to TV sets from 20 to 30 years ago because the games work best on the older sets.

“I want to keep this place fun for real gamers. When someone plays Mario, they expect it to react the way it did when they were younger, so you need the older TVs to get that.”

Prodigy is positioned as a game room for ages 13 and up. As a result, Bujak said some of the younger players have never seen televisions with picture tubes and often ask for help in turning them on. 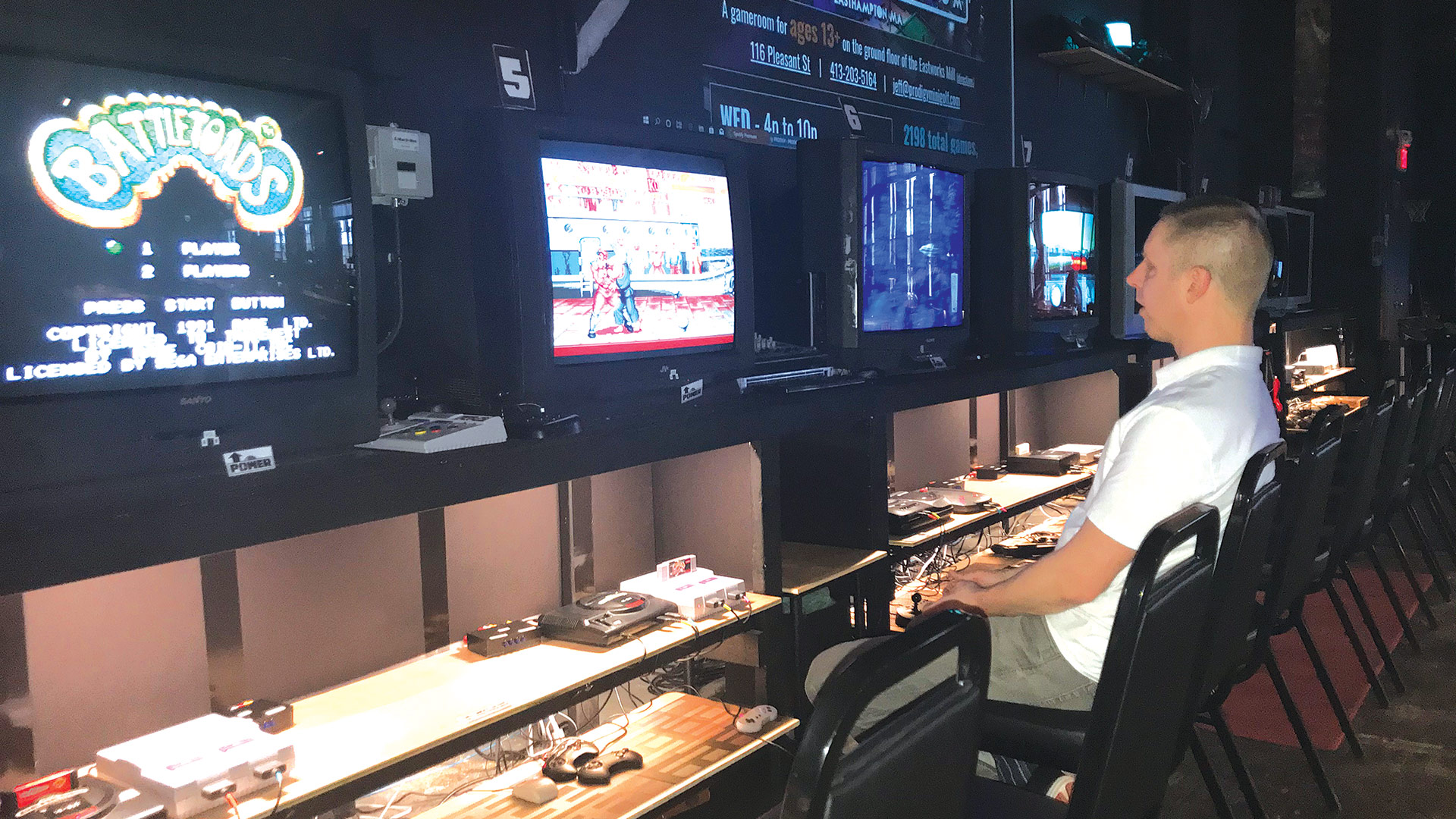 The nostalgia doesn’t end with video games, as Bujak proudly pointed out that, instead of serving alcohol, Prodigy offers vintage sodas such as Yoo-hoo, Mellow Yello, and Hawaiian Punch to put customers in a nostalgic mood.

Bujak considered naming the game room after himself, but Bundy suggested that choosing a an edgy word people could relate to might be more effective. After researching several candidates, Bujak landed on ‘prodigy,’ loosely defined as ‘young and smart.’

“My vision was for a place that was ‘young’ in the sense that it always offered something fresh, and ‘smart’ because it encouraged people to use their brains in a fun way,” he said.

He envisioned a game room with one admission price, and every game is then free to play, intentionally countering the typical business model of an arcade, where admission is free and customers pay for each game they play.

All-day admission on Wednesdays and Thursdays costs $10 “per human” and increases to $12 Friday through Sunday. Monthly memberships and discount punch cards for small groups are also available. Bujak said he wants to keep his focus on providing value to people who visit Prodigy.

“I will often ask myself, ‘what does $12 get you at a movie theatre compared to the experience at Prodigy?’ Did my customers get their $12 worth?”

Opened in March 2018, Prodigy features a rich mix of retro video games, classic pub games, and stacks of board games. Winding its way throughout the game room is a challenging 18-hole mini-golf course Bujak designed and built himself. As someone who won mini-golf tournaments in the past, he researched courses and game rooms throughout the Northeast to come up with a fresh design for his course.

“My vision was for a place that was ‘young’ in the sense that it always offered something fresh, and ‘smart’ because it encouraged people to use their brains in a fun way.”

“I wanted to throw a whole different angle on mini-golf course design,” he said. “I’ve tried to incorporate some of the decision making players are confronted with in video games and apply that to mini-golf. “

He explained further that, like a video game, many of the holes on the course offer several paths to aim for, all with different consequences.

Business has been brisk, with Bujak doubling his first year’s projections. Along the way, he has also been making adjustments to the room and game choices to make sure the appeal stays fresh.

“I see my key demographics as people in their 30s,” he said, adding that couples in their 30s will often come together to Prodigy to play competitively with a board game or a four-player video game. If they want to play cooperatively, they can form a band and play Guitar Hero.

Bujak has also found that Prodigy is a great place for first dates.

“You can really get to know someone better when you are having a conversation over a game — not to mention what you learn about a person when you see how they handle winning and losing,” he said. Because Prodigy doesn’t serve alcohol, it’s also a safe place to ‘break the ice’ with someone.

“While we host plenty of families and friends, our place appeals to folks who don’t know each other well, but end up knowing each other better at the end of the experience,” he noted.

With that dynamic in mind, he sees hosting business groups as a growth opportunity for Prodigy in 2020. “Because games bring out the competitive and cooperative nature in us, I feel we can offer companies a great place for team-building events and networking opportunities.”

From day-long rentals to single meetings, Bujak said Prodigy is set up with plenty of audio-visual support, including a 10-foot-wide screen for PowerPoint and video presentations and seating to accommodate up to 40 participants.

Recently, Bujak hosted his former co-workers from Viability, who took part in several staff days. This experience assured him that Prodigy can be an effective location for off-site business meetings.

“When you have a social event with a game theme, it generates conversation in ways other gatherings don’t,” he said, adding that “competing with yourself or with others creates healthy competition, which is good for your mind and good for productivity.”

Prodigy has found success early on as a place where people bring their friends to share a fun place they’ve discovered, which is right in line with Bujak’s marketing strategy.

“From the beginning, I’ve told people that Prodigy is not like any other place,” he said. “It’s something you have to come and see.” 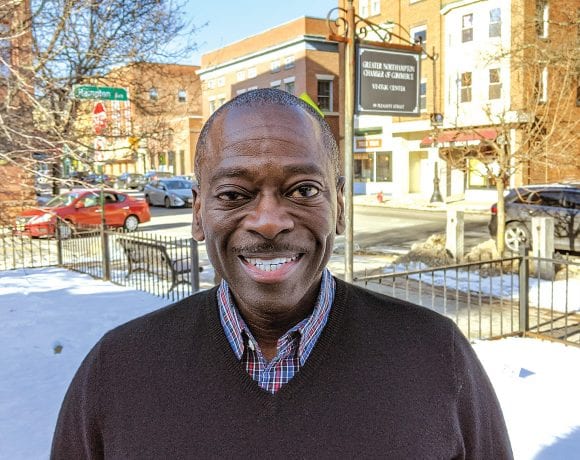 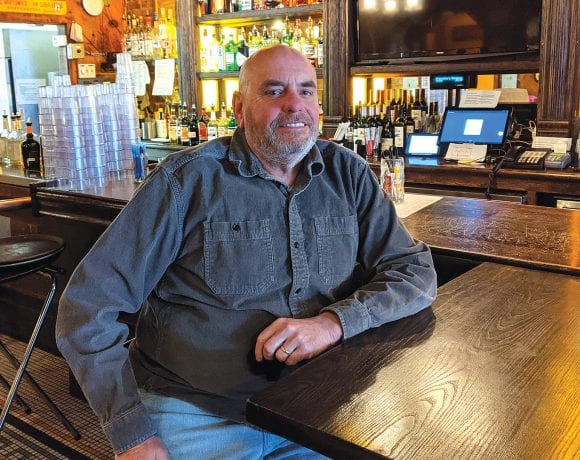