A fiddlehead is a small, green plant with a curved top, like the scroll of a violin.

Indigenous to the Pioneer Valley, fiddleheads start out very small, but are hearty, growing incrementally from year to year and able to withstand the change of the seasons.

These characteristics have made the plant the symbol for the Community Foundation of Western Mass., and the fiddlehead is emblazoned on all of the organization’s printed materials. Based in Springfield, the foundation collects and manages large sums for distribution to various charitable causes. And like the unique plant, the foundation started very small, and has gradually, quietly grown in Western Mass. to become a multi-faceted philanthropic entity.

Formed in 1991, the Community Foundation provides grants, scholarships, and other charitable aid through a flexible pool of funds. A diverse set of contributors, both organizations and individuals, donate gifts, and those contributions are in turn managed and disseminated by the foundation, which makes awards in three cycles each year.

A total of 450 different funds are used to address needs within the community. Some are unrestricted, but many come with designated uses attached, or allow for the benefactor or an appointed board to advise the Community Foundation on its end use.

All told, there are seven different types of funds managed by the foundation: unrestricted; field of interest, which allows a donor to specify a cause to be served; donor-designated, which specifies one or more charitable organizations for endowment; donor-advised, which involves the donor directly in the grant-making process; scholarship, which allows for gifts to college-bound students; agency endowment, which allows nonprofit organizations to build their own endowment under the foundation’s direction, and agency-advised funds, which directly involves a nonprofit in the distribution process to other charitable organizations.

Last fiscal year (from April 2004 to March 2005), the Community Foundation returned $5.9 million to the region, funding everything from restoration of Springfield’s Symphony Hall to four separate land preservation projects; dental screenings for Springfield children to training programs for parents of children with autism.

To cover operating costs, the foundation charges a fee on each fund it administers on another’s behalf, ranging from six-tenths of a percentage point to 1.5%, based on the fund. A small fundraising campaign raises about $50,000 annually, bringing the total operating budget up to about $1 million.

While an effective model for pooling and managing funds for philanthropic distribution, the Community Foundation of Western Mass. is one of only 600 such organizations, each independently operated, in the country. It’s also one of the younger outfits, but as the foundation’s president Kent Faerber explained, it’s also growing in both size and scope.

“We’ve become a major resource for the nonprofit sector,” said Faerber. “We take in about $6 million a year and give nearly all of that away. We tell people that they should be interested in that because the non-profit sector is a major part of our economy in Western Mass. — it’s about 7% of the national GDP, and I suspect it’s slightly more in our region.”

Several businesses in the area use the foundation to assist them in their philanthropic efforts. MassMutual, for instance, contributes about $700,000 each year that the foundation then disseminates across the region.

“We help businesses and individuals in the region support that sector in ways that they couldn’t otherwise,” said Faerber. “Giving money away is easy. It’s deciding who to give it to and how much that is hard, and that’s our expertise.”

The foundation also keeps all of the funds contributed by area businesses and individuals in Western Mass., an attractive draw for potential contributors.
“We help local donors fund local causes,” Faerber added. “We’re trying to make local philanthropy more efficiently deployed, and that also makes us appealing to the business community because we are careful and deliberate.”

While the foundation’s core staff is relatively small, with 11 employees, it draws on the talents of an large cadre of volunteers who help distribute funding three times a year, based on grant and scholarship applications submitted by area nonprofits, students planning for college, and others. Those volunteers are experts in a variety of fields, from financial planning to higher education.

The work is long, arduous, and involved, but Faerber said there’s no cap to how many funds the foundation can or will administer.

“Every year, we welcome new people and new funds,” he said. “We have a set of procedures in place that can support many more … that’s not a problem.”

This year, the foundation has completed one cycle of funding, awarding thousands of dollars to 62 different organizations, including:

In addition, the foundation recently announced the dissemination of $2.2 million in scholarships for college-bound students, an annual component of the foundation’s funding structure. Thanks to that assistance, derived from 95 specially earmarked education funds, 740 students (the majority from Hampden County) will attend college across the country; however, those attending local colleges received the largest portion of funding.

Generally, the Community Foundation’s three funding cycles allow for awards to a diverse set of students and organizations. Mary Jenewin-Caplin, program officer, said rarely will the foundation reserve funds for specific uses, other than those directives made by contributors when individual funds are set up.

“Typically, we let the donor decide,” she said, “because essentially, that amounts to the community deciding its own fate.”

This year, however, the foundation has taken a turn, reserving one-third of its annual funding for a new initiative, the Five and Under Initiative, which will operate for at least the next three years.

As Jenewin-Caplin explained, it was not a decision that was entered into lightly, and resulted from three years of careful analysis of pressing needs in the Pioneer Valley. Working with the Pioneer Valley Planning Commission, the foundation was able to identify areas in which the Valley is unfavorably rated, compared to the rest of the state and the country.

One such area was child poverty, and Jenewin-Caplin said the need was pressing enough to prompt the foundation to move forward with a plan to use contributed dollars to address the issue.

“The decision was the result of our findings that the 10,000 children living in poverty age five years old and younger are one of the most vulnerable groups in the Valley,” she explained, noting that the number of children under age five living in the area hovers around 22% — more than twice the national average. “The impacts of that vary from disparities in school readiness to higher rates of hospital admissions. This initiative will be accomplished through grant-making that will address the root causes of poverty.”

The grants expected to be awarded will not stray from the foundation’s traditional model of funding a wide variety of programs, however. The Five and Under Initiative is expected to assist GED and ESL programs, home visit outfits, early childhood education, and child health programs, among others.

And as the foundation’s new initiative gets off the ground, Faerber said its staff is also gearing up for a new round of grant application reviews and visits (every applicant is evaluated on site by a foundation staff member), the recruitment of new fund contributors, and some new marketing efforts designed to put the Community Foundation on the map. As with fiddleheads, many people in the Pioneer Valley still aren’t familiar with the organization, or the strong, steady growth it has seen over the last 15 years.

“We’re sort of a stealth organization in that way,” he said. “We probably raise more money than any other area organization, with the exception of the larger colleges. But many people still don’t know that we’re here, or the extent to which we work in the field of giving.

“Over the next few years, we’re most interested in being more efficient and intelligent with our giving,” Faerber added. “The way we see it, we can function quickly, or we can function well. And in our view, smart is better.” 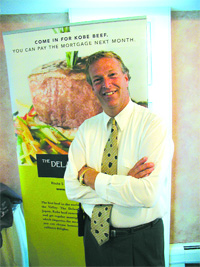