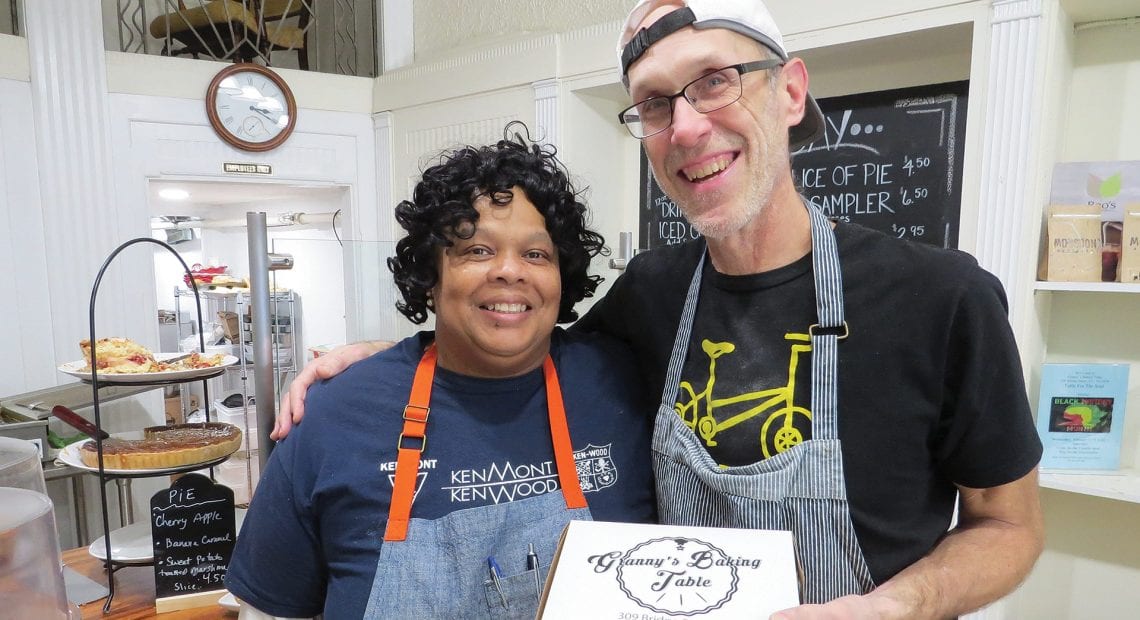 Granny’s Baking Table Speaks to a Different, Much Simpler Time 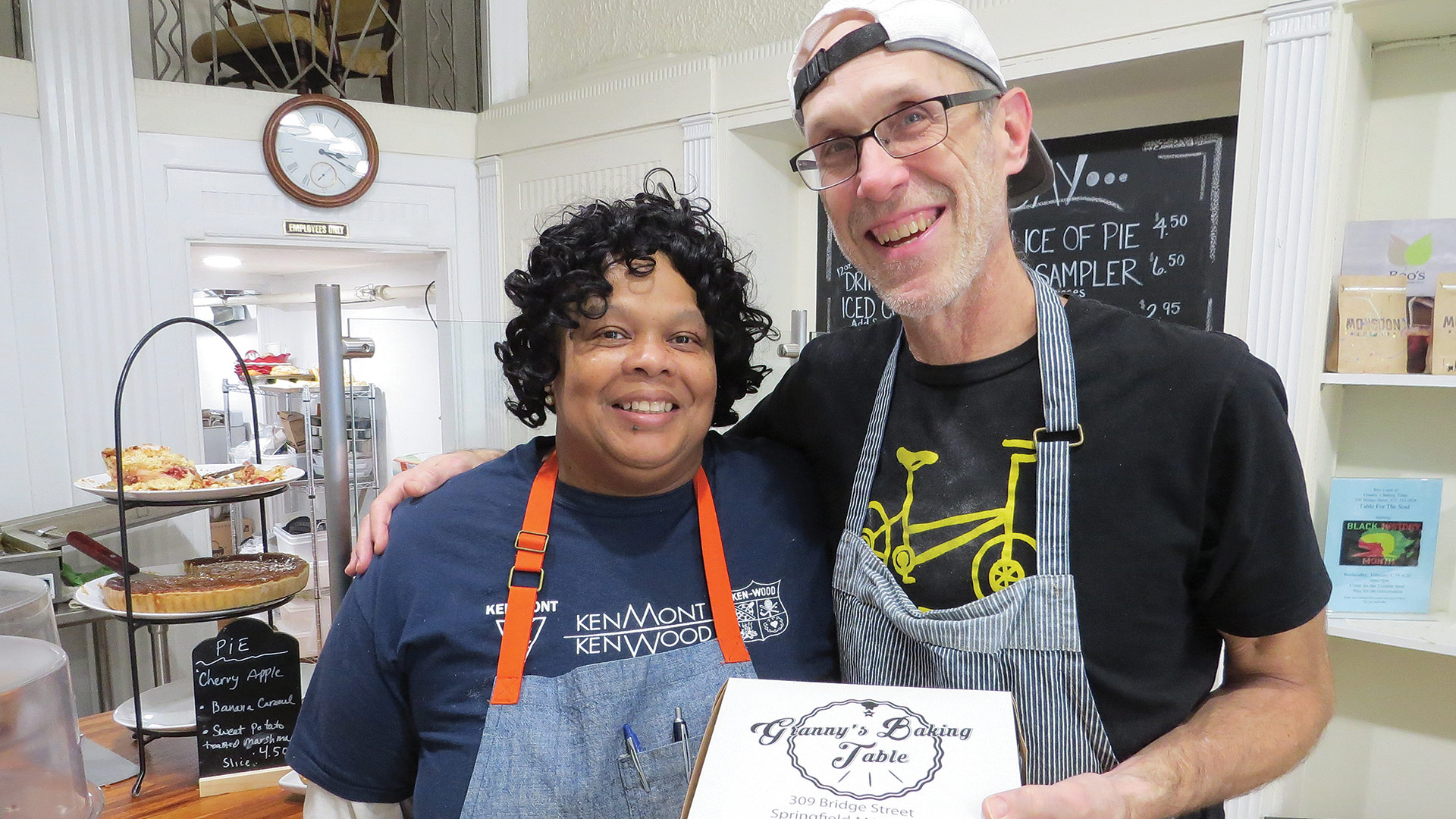 It’s a small business, but it might just be a big part of a significant movement. Granny’s Baking Table, which opened just a few months ago, speaks to a different age in Springfield’s history, when small, locally owned businesses dominated Main Street and the roads around it. And in many ways, it operates in a way consistent with that age — there’s no wi-fi and, instead, a focus on conversation. It’s a blast from the past, but those behind it hope they represent the future.

Todd Crossett remembers how it all started — and especially how his chapter in this story began.

Then a faculty member at the Isenberg School of Management at UMass Amherst, he was making beignets, a French pastry featuring dough and powdered sugar, as a hobby more than anything else. His son told him they were so good that he could sell them from a bicycle.

So he did. In downtown Springfield.

“There were a lot of motivations for that, starting with the fact that downtown Springfield was kind of boring at that time, and I complained about it a lot,” he told BusinessWest, noting that he’s lived in the Mason Square area for more than 25 years. “But then I thought, ‘what am I going to do about it?’ So I thought, ‘this is my contribution, a funky bicycle and beignets that people swoon over; that will be my part.’

“But it didn’t end that way, did it?” he went on, with a hearty laugh, gesturing to his current business partner.

That would be Sonya Yetter, who, While Crossett was selling his beignets on his bike, was in business for herself with a soup and sandwich shop in the Forest Park section of the city.

After years spent cocktail waitressing, bartending, and other assorted jobs, she decided to attend culinary school in Europe. Upon returning to the States, she lived and worked in Maryland and Florida before returning to her hometown of Springfield.

“There were a lot of motivations for that, starting with the fact that downtown Springfield was kind of boring at that time, and I complained about it a lot. But then I thought, ‘what am I going to do about it?’ So I thought, ‘this is my contribution, a funky bicycle and beignets that people swoon over; that will be my part.’”

Through a series of circumstances that will be detailed later, the two have come together in a new venture called Granny’s Baking Table, a name that reflects what goes on there, but doesn’t come close to telling the whole story.

Granny’s is a blast from the past, and in all kinds of ways, as we’ll see. It’s a nod to a day when the streets of downtown Springfield were teeming with small, locally owned businesses like this one. And it’s a nod to the small bakery, with this one combining the baking traditions of the American South and Northern Europe.

It’s all summed up — sort of — in this line from the eatery’s website: “It is our mission to create a space and products that harken to simpler times, when baking was from scratch and the table was for gathering and conversation.” 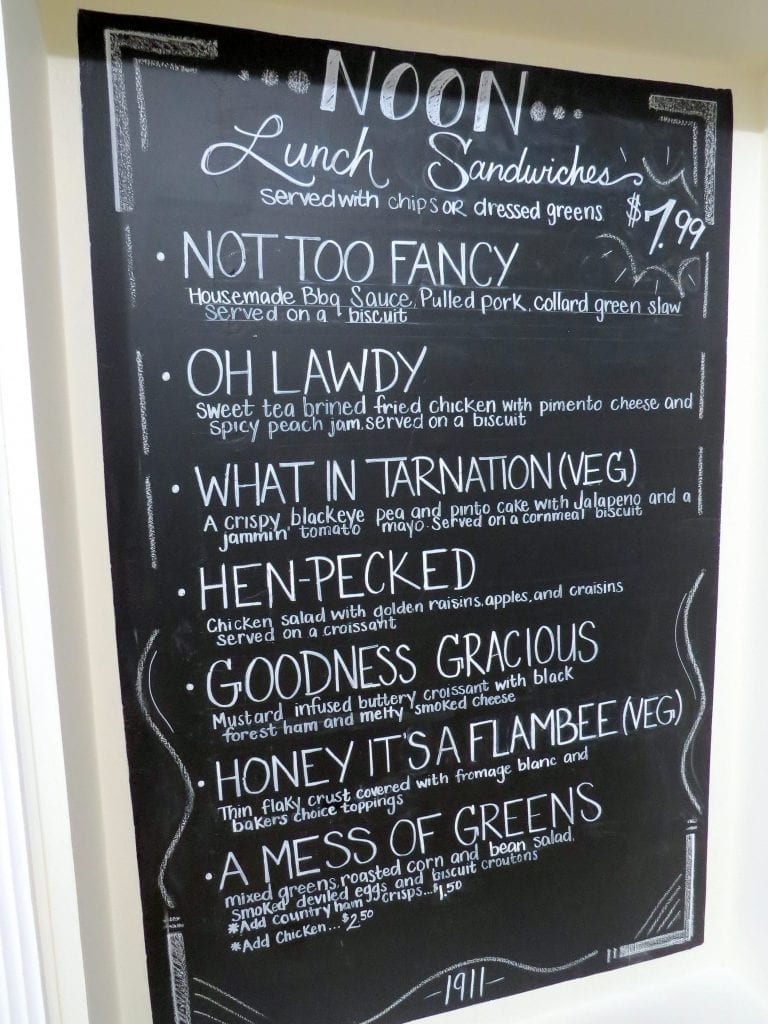 The menu, like many other aspects of Granny’s Baking Table, is simple, direct, and a nod to the past.

That table — and there is, for the most part, just one large one that sits in the middle of the room — is indeed just for those purposes. There is no wi-fi, so one could do some work, theoretically, but if they wanted to read the morning paper, they would likely have to do it the old-fashioned way and crack open the print edition.

Speaking of old-fashioned, there’s more of that on display at this venue, from the simple menu displayed on a chalkboard — items include the ‘Oh Lawdy’ to the ‘Goodness Gracious’ to the ‘Not Too Fancy,’ a phrase that describes pretty much everything in the place — to the pictures on the wall; some are of family members, others of random individuals that reflect the diversity of the city and its downtown being celebrated at this establishment, to the holiday cookie exchange staged in mid-December (more on that later)

Overall, Granny’s is a nod to the past, and so far, to one degree or another, it seems to be working. The partners acknowledge that, three months after opening, they’re seeing both newcomers and repeat customers, and a good supply of both. But they acknowledged that it’s difficult going up against national chain coffee shops and other forms of competition. And they also acknowledged that times have indeed changed, and operating a business based on small-batch baking is far from easy.

The scope of the challenge they’re facing is reflected in the skepticism they encountered as they went about securing a site, putting a business plan in place, and getting the doors open. It came from family, friends, and even the broker that showed them the property.

For this issue, BusinessWest takes an in-depth look at this unique new venture and how its principals are undertaking a noble but nonetheless daunting assignment — bringing the past into the present and making it work.

Returning to the story of how these two came together — a story they share often because they’re asked often — that chapter really began when Crossett was serving as food-vending recruiter for the Springfield Jazz Festival, and knocked on the door to Yetter’s business in Forest Park.

He successfully recruited her for the event, and they kept in touch. “And here we are,” she said while bypassing several subsequent chapters as the two talked with BusinessWest at that large table in the middle of the room — actually, it’s several smaller tables pushed together.

Filling in the gaps, Crossett said he was looking for a space in downtown Springfield — specifically some square footage in the Innovation Center taking shape on Bridge Street — a from which to sell beignets and other items. Unbeknownst to him, Yetter, a UMass graduate who grew up Springfield, had signed a lease for the property almost across the street — one that had most recently been home to the Honey Bunny’s clothing store but had seen a number of uses over the decades — as a second location for her business.

The Innovation Center plans essentially fizzled as the development of that property changed course, Crosset recalled, adding that he left the last discussions on those plans quite dejected. He was on a cross-country tour with his son when he started thinking about how he and Yetter would not be in competition with one another, so maybe they should become partners. 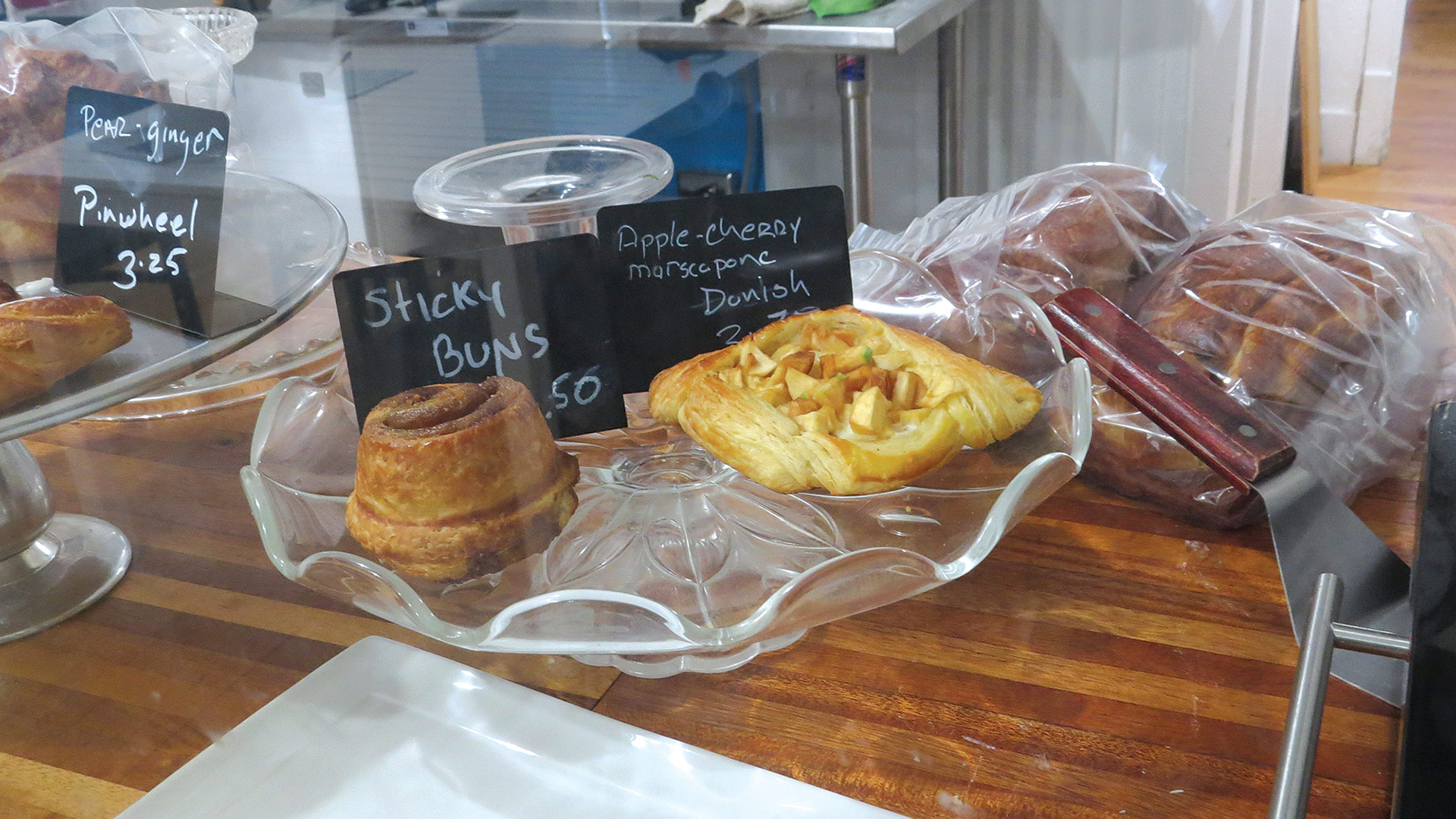 Some of the pastries available at Granny’s Baking Table.

“He texted me and said, ‘we should talk,’” Yetter recalled, again zooming through subsequent steps for another ‘and here we are.’

That text was sent roughly a year ago; the months that followed were spent converting the space into a bakery — ceilings had to be raised, and a kitchen had to be built — as well as overcoming the skepticism of others around them and getting the venture off the ground.

They were fueled by the desire to make downtown less boring and to be a part of ongoing efforts to restore the vitality that Yetter remembers from her childhood.

“I grew up here, so I remember what downtown once was,” she told BusinessWest, adding that she was in one of the last classes to graduate from Classical High School, which closed in 1986. “I spent a lot of time in Johnson’s Bookstore and Steiger’s — it was a booming, booming town.”

By the time she returned to the city, it was no longer booming, she said, adding that she believes the large shopping malls, now struggling mightily themselves, sucked much of the life out of the central business district. The best hope for the future is small businesses moving into the downtown, she said, adding that Granny’s is part of that movement.

“My hope, and my belief, is that there are more people who are interested in becoming small-business owners now and perfect a craft they might have,” she said. “It’s my hope that this will revitalize the downtown area.” 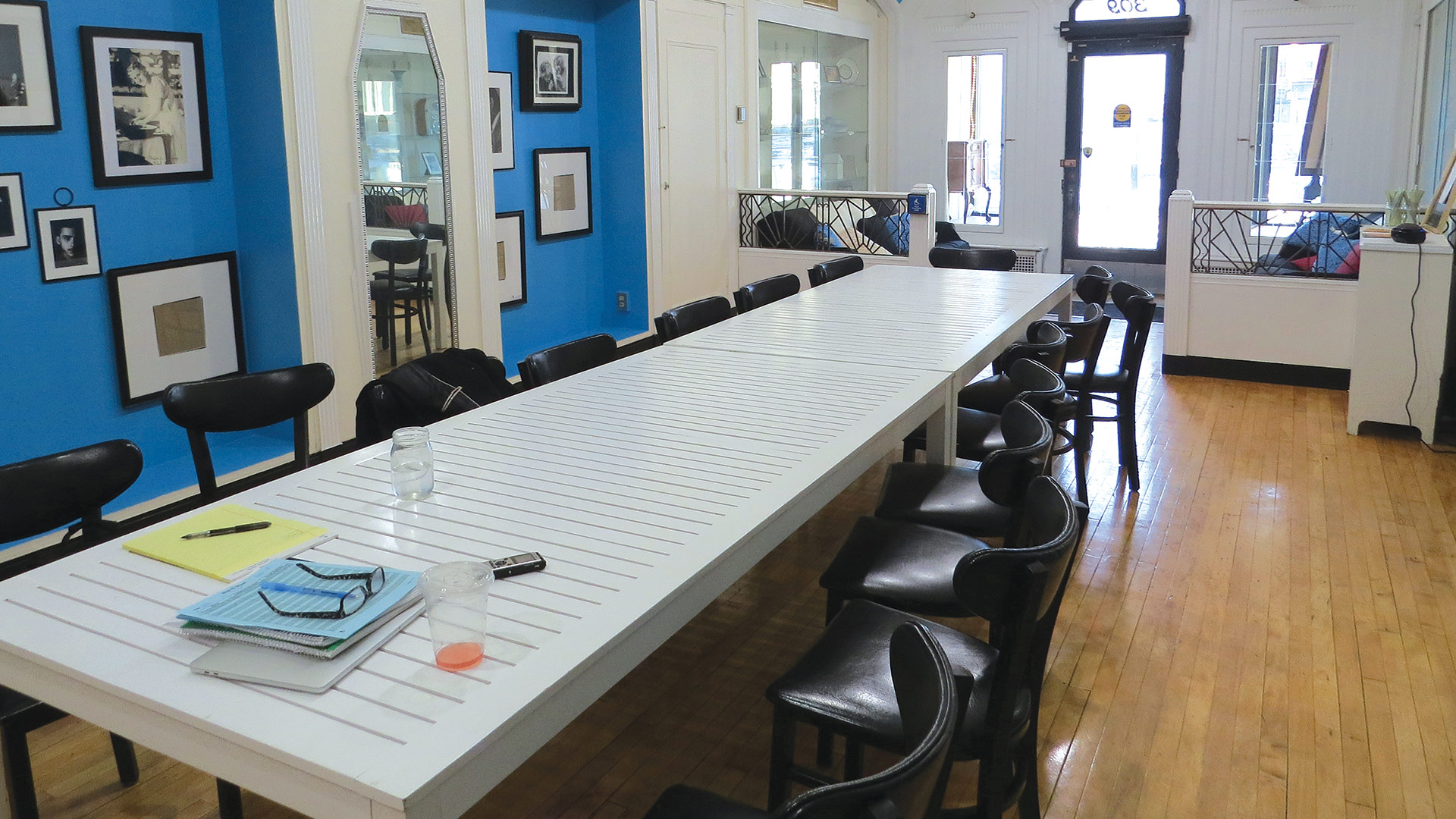 The communal table, designed to stimulate conversation among patrons.

Today, Yetter splits her time between the Super Sweet Sandwich Shop in Forest Park and Granny’s, with more time at the latter because it’s just getting off the ground. Both she and Crossett said they are off to a solid start and they expect to gain momentum as more people find out about them and perhaps change some eating habits — specifically getting away from fast food, not only at lunch but breakfast as well.

Granny’s features an array of pastries — each day the lineup is different — that include danish, scones, sticky buns, muffins, beignets, and more. The lunch menu, as noted, is rather simple and focused on the basics; for example, the Not Too Fancy is pulled pork with homemade barbecue sauce, the Oh Lawdy is sweet-tea-brined fried chicken with pimento cheese and spicy peach jam served on a biscuit, and the Goodness Gracious is a mustard-infused, buttery croissant with black forest ham and smoked cheese.

Thus far, there’s been a lot of grab and go, especially with the businesspeople working downtown, said Crossett, but there have been many who have sat down to eat as well.

“It is our mission to create a space and products that harken to simpler times, when baking was from scratch and the table was for gathering and conversation.”

Which means that most have had to adjust some other habits as well, the partners acknowledged, noting again that there is no wi-fi here, and there is that ‘communal table.’

“We have a space where we want people to come in and talk and have a conversation,” Yetter explained, “and hopefully get to know anyone else who’s at the table with them — that’s our goal.”

It’s a goal that’s being met in many respects.

When asked about the success formula to date, Crosset said there are some interesting ingredients.

“We got into the space together, we both have a good sense of humor, we’re both patient, and we’re both really, really finicky about our product,” he explained. “And those things hold us together.”

Yetter agreed, and said another big factor was successfully creating “the feel and the vibe” they were looking for — which together speak to another age, another time, as reflected in that mission statement on the website and the reference to simpler times and baking from scratch.

Time will tell if the skeptics were right or if these somewhat unlikely partners can actually turn back the hands of time. But for now, they seem to be taking some of the boring out of downtown and giving people something new to talk about — whether it’s at that communal table or back in their office. 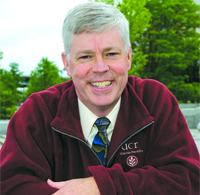