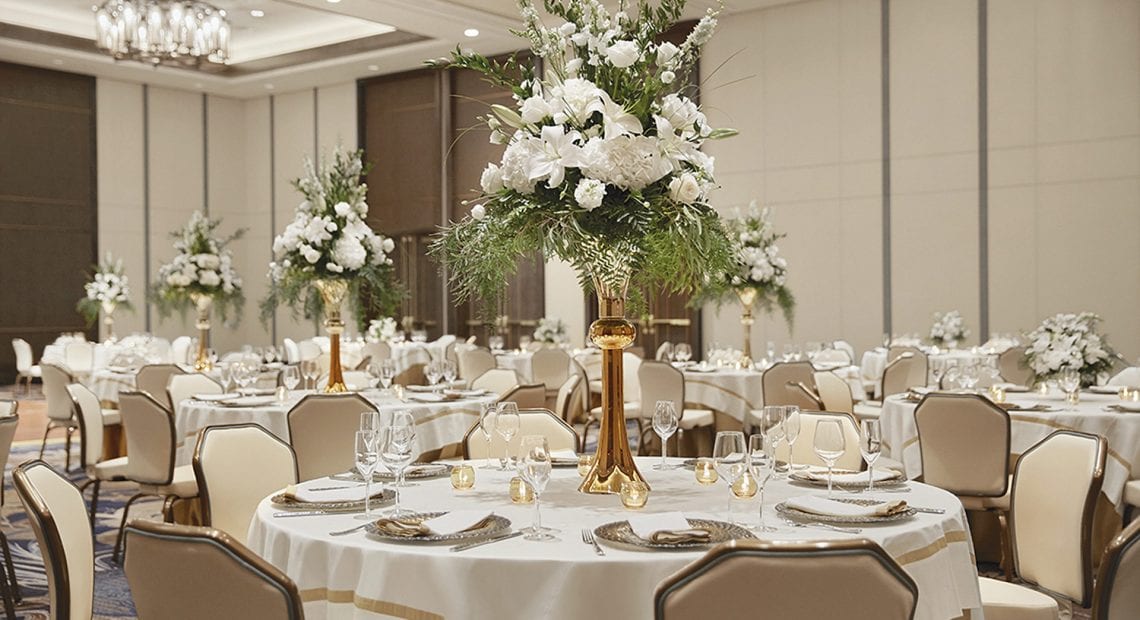 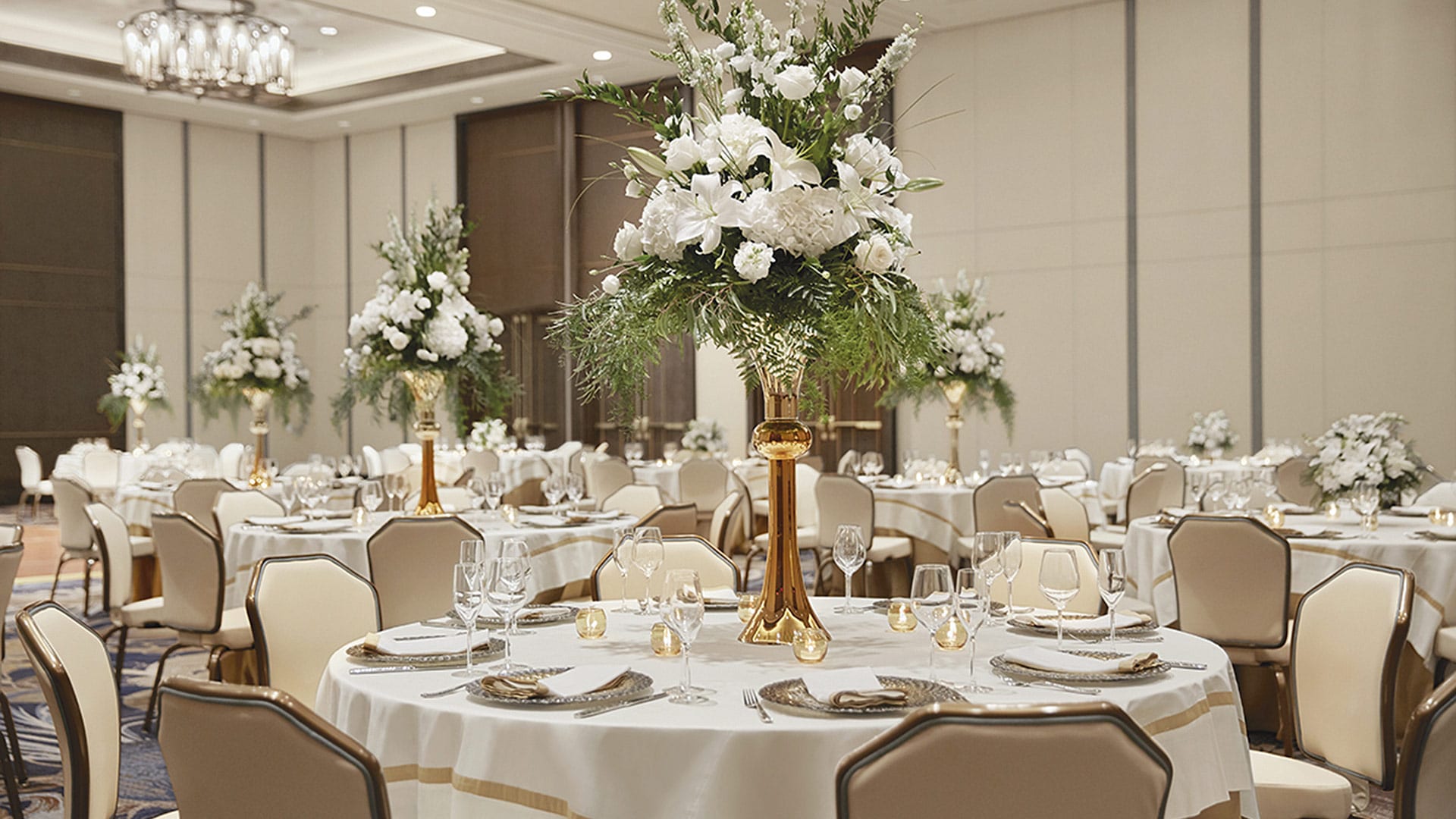 The Bellagio ballroom at MGM Springfield is among the region’s newest option for parties and banquets.

Buoyed by a strong economy, these are good days for area venues that host year-end company parties — and any other type of event, really. But with so many options, it’s a competitive environment — one that has become even more so with the emergence of MGM Springfield on the scene. Yet, new players might also be boosting interest in party bookings in general, raising the fortunes of everyone who promises to bring fun and flexibility to the season’s many gatherings.

In the eight years since she opened her event-planning business, Tanya Costigan has seen plenty of changes in corporate party planning. In fact, launching her enterprise, Tanya Costigan Events, at the tail end of the Great Recession was a challenge in itself.

“There was definitely a downshift in the year-end parties, but I do feel like they are picking up a bit,” she told BusinessWest. “I think part of it has to do with some of the new venues that are here, like GreatHorse and MGM; these heavy hitters are playing a role in getting people excited. A friend of mine was looking elsewhere, and is now thinking about a client-appreciation event at MGM next month. So I think it’s triggering some excitement in the industry in general.”

Anthony Caratozzolo is certainly excited. As vice president of food and beverage at MGM Springfield, he’s been pleased with early bookings in the casino resort’s banquet space, which encompasses the Aria and Bellagio ballrooms and can host groups from 15 to 540 people.

As an integrated resort, MGM arrived on the scene with the aim of raising the bar for entertainment and events of all kinds, including holiday parties, because attendees can move right from a party to the casino floor, the Commonwealth Bar and Lounge, a movie, bowling, ice skating, or shopping — not to mention staying overnight at the hotel. 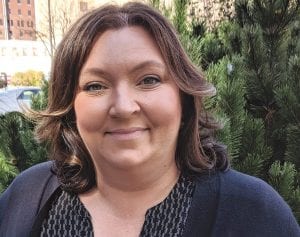 Tanya Costigan said she enjoys helping clients hone their vision for a broad range of parties and other events.

“Clients can also book extracurricular activities,” he said. “If they want a suite at Topgolf or want to go bowling, they can book all that with the catering manager. They just have to figure out what they want to do with their night.”

Like other event organizers who have spoken with BusinessWest leading up to the holiday season in previous years, Caratozzolo has seen a healthy mix of party requests.

“Every group is different. Some of the companies have been around a long time and tend to enjoy a formal, sit-down dinner, while the younger generations may enjoy a reception style — and both of these are built into our catering package,” he said. “We’ve had a lot of inquiries, and we’ve had some bookings.”

At a time when businesses seem to be investing in holiday parties, MGM offers another high-profile option that, at the very least, has people talking about how they want to celebrate the season and thank their employees.

Costigan told BusinessWest that sometimes a venue brings her in to plan an event, while other times the client hires her, and she might help choose the location. Describing her job as “planning, design, and management,” she has a role to play from the initial idea through the big day, helping everything run smoothly.

“I do everything from birthday parties and weddings to holiday parties,” she noted, with recent events including Square One’s annual tea party at the Starting Gate at GreatHorse, and the Link to Libraries gala at the Log Cabin.

“I might be doing the design, the planning … there’s a wide scope of things I do,” she said, noting, as Caratozzolo did, that clients are calling for a range of styles when it comes to social gatherings.

“It does vary, but I find that a lot of the people are going for the stand-up, cocktail-hour feel, with passed apps and drinks. Sometimes they do a fun, themed signature drink. And sometimes the holiday parties are not necessarily Christmas-related — I had someone do a year-end party that had the feel of a street carnival, but it was inside the venue. It’s not always winter-themed.” 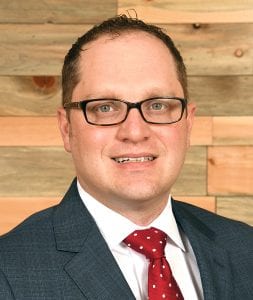 Reasons for holiday parties vary as well, Costigan added. “I find a lot of them are for client appreciation, but, for example, I did the Keller Williams holiday party, and it was all of their different branches coming together and having a fun party. So I think sometimes it’s a bonding thing for the employees.”

Bistro 63 in Amherst has become a popular event site for area colleges and businesses, Event Manager Alyssa Blumenthal said. Business tends to pick up starting in October, not only with the approaching holidays, but because it tends to be a hot season for convention business — and those events tend to spur further bookings. “The end of October is the busiest time of year to receive holiday party bookings. We also get a lot of reunions this time of the year — high school and college.”

Because it easily transforms from a banquet space to a nightclub — often during the same event — many business owners in the area recognize it as a place where they can complement their party with an evening of dancing as well.

“That’s been fantastic; we’ve really been working on training the staff to cross-sell services,” Blumenthal said.

Bistro 63 is also known for its elaborate — and creative — cocktail program. In addition to a rotating list of custom cocktails, the venue creates unique concoctions for specific events. For example, attendees of the International Conference on Soils, Sediments, Water and Energy at UMass Amherst, which books an event at Bistro 63 each year, recently enjoyed a ‘sediment sour,’ which was made to look like dirt garnished with rosemary.

“The soil convention group is all middle-aged men, 40s and 50s, who come up to the bar with a smirk on their face, asking, ‘what smart-aleck cocktail do you have for us this year?’ And I’ll get them to try these ridiculously frilly drinks,” Blumenthal said. “We try to have fun with our events because so many people do associate us with the nightclub.”

Caratozzolo agreed that fun should be at the heart of any party.

“MGM is all about entertainment — that’s what we do, whether it’s an elaborate party or just a small get-together,” he said. “That’s what we’re good at, what we love to do; we work with clients to find out what they want. At the end of the day, they’re our guests, and every group is different.

“We’ve had large conventions, we’ve had expositions, we just booked our first wedding about two weeks ago, and we have small association groups — maybe bridge clubs or chamber events,” he went on. “We have all the capabilities to really do anything, because we’re MGM. We can open a lot of doors.”

Likewise, Bistro 63 hosts parties of all types — holiday events, corporate dinners, cocktail parties, rehearsal dinners, reunions, and more — ranging from small gatherings to large events up to 240 people. A large room can be divided into smaller spaces, including a covered deck outside.

“Last year we had the highest number of rehearsal dinners booked, and we’re super excited to continue that trend,” Blumenthal said. Also on the rise are companies hosting recruitment and networking events for students at the Five Colleges.

“We’ve hosted Google, PwC, Newell Brands, and some other regional corporations, as well as a handful school-sponsored events this year,” she added. “More than half our staff are students — UMass, mostly — and we love hosting these events because it speaks to the strength of the academic programs in the area, and it has directly resulted in increased business for our establishment.”

But holiday parties, too, have been on the rise, with bookings increasing each year as the economy continues to chug along, she told BusinessWest.

“Many companies had annual gatherings and stopped doing it for budgetary reasons, and have since put it back in the budget,” she noted, adding that Bistro 63 markets its flexibility and quick turnaround times to plan events — and that has become a key element in its growth. 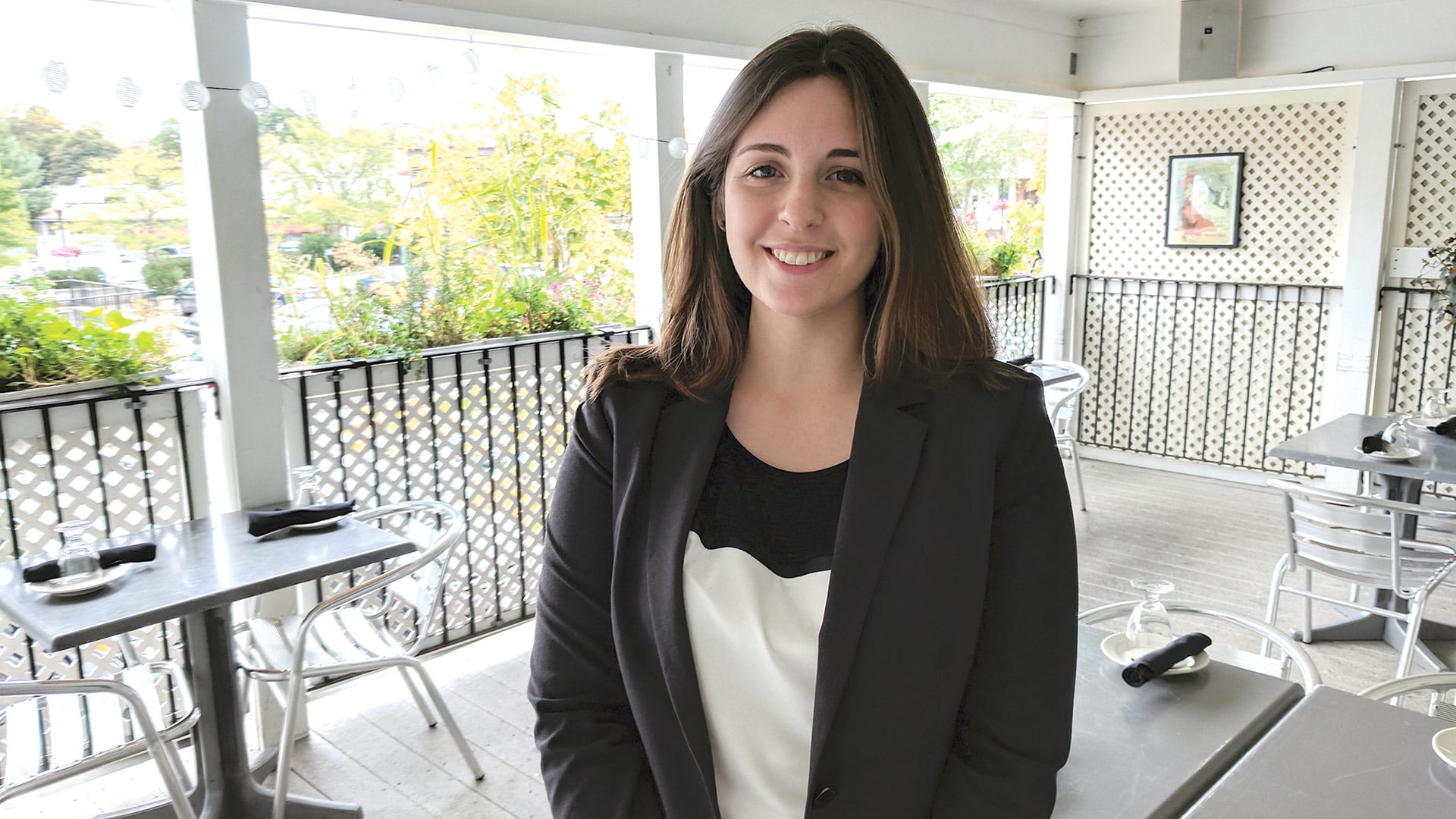 Alyssa Blumenthal says being flexible and nimble with turnaround times can lead to bookings that later become repeat customers.

“Those short-notice events have lots of times turned into annual events for us. Clients say, ‘maybe we do have the budget for a small dinner for our core team,’ then it goes really well, we provide service better than they expected, and they come back year after year.”

Costigan enjoys those success stories, too, like the recent Square One tea, which boasted a vintage golf theme.

“I love the design part. The planning and management are great, but the design is my favorite part,” she said, recalling the reaction of Kristine Allard, Square One’s chief development and communication officer, to Costigan’s initial designs for the event.

“When she saw my design board for what vintage golf means to me, she said, ‘oh my God, you climbed right into my head.’ It was amazing. I love that part — as well as installing the whole design, when they’re like, ‘this is great.’”

It’s a reaction any event planner or venue hopes for, when it comes to holiday parties or any other event — because it’s those reactions that keep businesses coming back, year after memorable year. 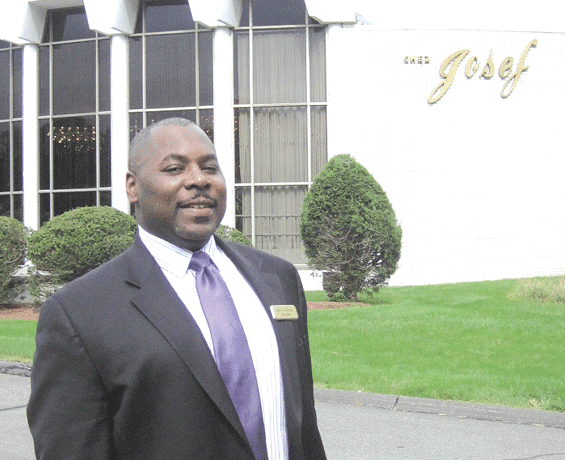