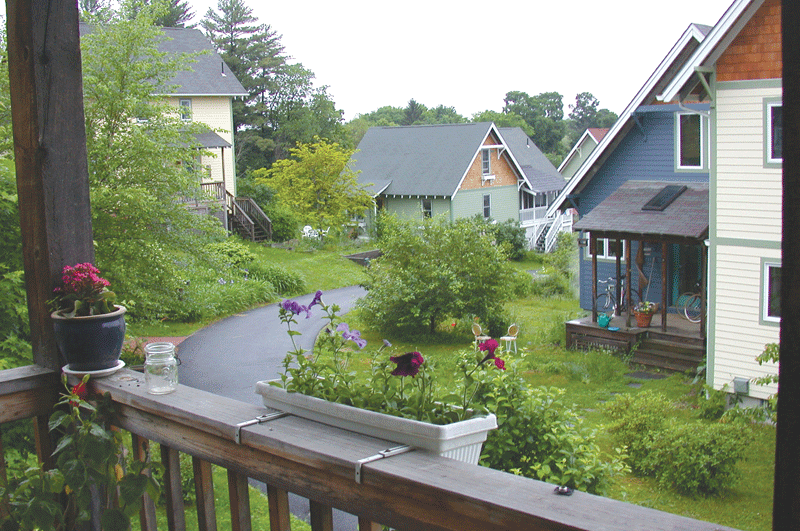 The homes at the Pioneer Valley Cohousing community are tightly clustered around a pedestrian loop, fostering informal social interactions and preserving open space on the rest of the site.

It’s no understatement to say Laura Fitch has dedicated her life to the philosophy of cohousing — not only through her architecture career, but because she has lived in a cohousing community for nearly 20 years. The model, which encourages togetherness and elements of both private and communal living, is becoming more popular among young families, retirees, and students, making it an ideal opportunity for intergenerational connection.

The space is nestled inside a sun-drenched building at the entrance of Pioneer Valley Cohousing, a 22-acre stretch of private homes clustered around a communal space.

Laura Fitch, a principal with the company, helped design the community, which has garnered attention as the East Coast’s first cohousing development. Fitch herself has lived in Pioneer Valley Cohousing for nearly 20 years.

“I grew up in Concord, Mass.,” she explained. “We had Thoreau and Walden, and I lived in a sort of cluster subdivision where we shared green space and community land and resources. It left an impact on me.”

A past board member of the Cohousing Assoc. of the U.S., Fitch first learned about cohousing during a trip to Denmark in 1980, the country where the concept was first developed.

That knowledge was followed by a stint with Peace Corps in Mali, West Africa in 1984, an experience that built in her a desire to seek out socially and ecologically responsible projects — and which partly explains why cohousing has become the heart and soul of her firm. 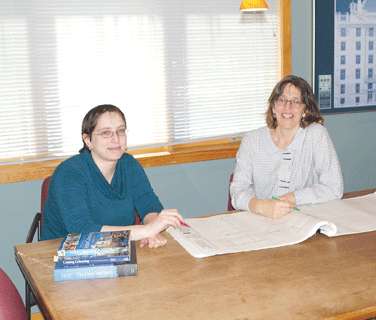 Cohousing members are expected to participate in the work that needs to be done to keep the community running smoothly, and Fitch relies on what is called an ‘affinity work system.’ That means she ensures every member pitches in by giving them the option to choose a task they’d like to complete that will benefit the community as a whole. Fitch’s husband, for example, helps with the members’ plowing each winter.

For this issue and its focus on architecture, BusinessWest talks to Fitch about why the cohousing model is an ideal choice for certain people, and how she has crafted a career around her long-time passion for community.

Since the first cohousing community was completed in the U.S. — Muir Commons in Davis, Calif., which recently celebrated 25 years — more than 160 such communities have been established in 25 states plus the District of Columbia, with more than 120 in process. Most cohousing communities are intergenerational, with both children and elders; in recent years, senior cohousing focused on older adult needs have grown. Small and large, urban and rural, newly built and retrofits, these communities have consistently been at the forefront of environmental and socially sustainable neighborhoods, according to the Cohousing Assoc. of the United States.

Cohousing units are intentionally designed to feel welcoming and comfortable to surrounding neighbors, so they may freely stop by each other’s homes to converse, share resources, or help watch young children. That said, families living in such proximity also have the potential to conflict. Fitch preemptively mitigates potential arguments by encouraging open lines of communication with fellow neighbors and peaceful negotiation. The complex also designates a ‘community life issue member’ who can facilitate classes for non-violent conflict resolution.

Fitch calls her cohousing community, and others like it across the country, “community at your doorstep, with privacy at your home.”

Young families, single working parents, retirees, professionals, and even students are among the demographics typically attracted to cohousing. Fitch believes cohousing offers a desirable model, one that is universal for people from all walks of life who, simply put, seek togetherness.

“If you went to summer camps, enjoyed undergrad time in dorms, if those were things you liked when you were younger, then I always tell people, you can naturally understand what it’s like to live in cohousing,” Fitch said.

She sees the senior cohousing movement exploding across the U.S. and believes that this trend will continue to grow in the coming years as a better alternative to costly assisted-living facilities or elderly people living in isolation.

“There are studies that show community is healthy for you,” she told BusinessWest. “People age faster and have more problems when they’re aging alone. Senior cohousing is becoming a real phenomenon.”

In addition to the social issues central to the design of a cohousing community, the ecological concerns of sustainability are a primary focus for cohousing groups. Many groups include sustainability as part of their vision statement, and Fitch’s firm has helped them to reflect these goals in the built community.

In general, she explained, site design is sensitive to land use. The buildings have solar access, and energy-efficient construction practices are employed. Materials and systems are specifically selected to minimize ecological impact and maximize indoor air quality. Units have front porches, which provide a bridge between public and private spaces in a cohousing community. Meanwhile, the houses are scaled to ensure they’re friendly to pedestrians.

Fitch’s specialized focus on sustainable design has earned the firm a spot in Natural Home & Garden magazine as one of the top 10 green-architecture firms in North America.

“People are recognizing now that it makes business sense … if you invest enough to reduce mechanical costs, that’s where you get to the sweet spot,” she said. 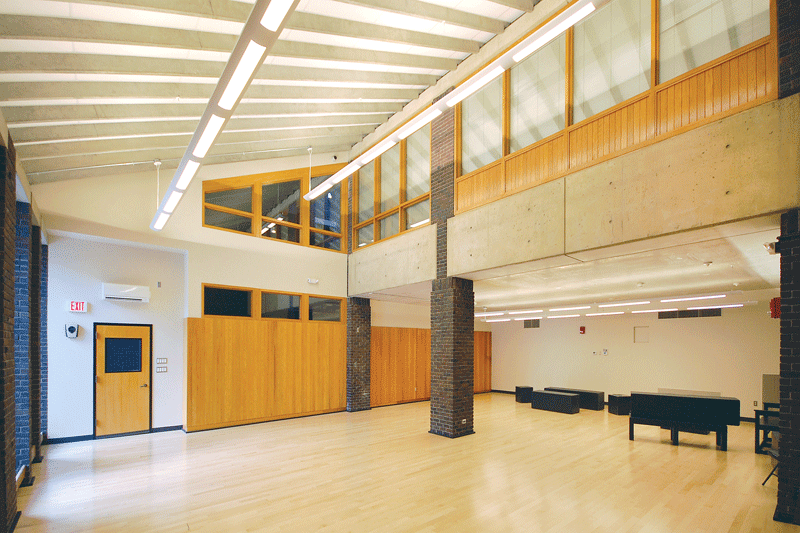 The new theater studio at Smith College was created by capturing space from a large and underutilized lobby at the Mendenhall Center for Performing Arts.

Fitch and her team have led hundreds of residential, commercial, and institutional projects, including net-zero-energy homes, educational facilities, and deep-energy retrofits.

In 2013, the firm received a Historic Preservation Award from the Northampton Historical Commission for its work at Smith College’s Dewey House. The 1827 building needed significant upgrades, so, after completing an initial feasibility study, Fitch’s firm was asked to complete full services for energy improvements and a new exterior lift. Working with energy consultants, it ultimately achieved a 65% reduction in air infiltration.

Meanwhile, the Hartsbrook School, a Waldorf educational facility in Hadley, chose to work with Fitch and her team for a project focused on creating a new early-education building. 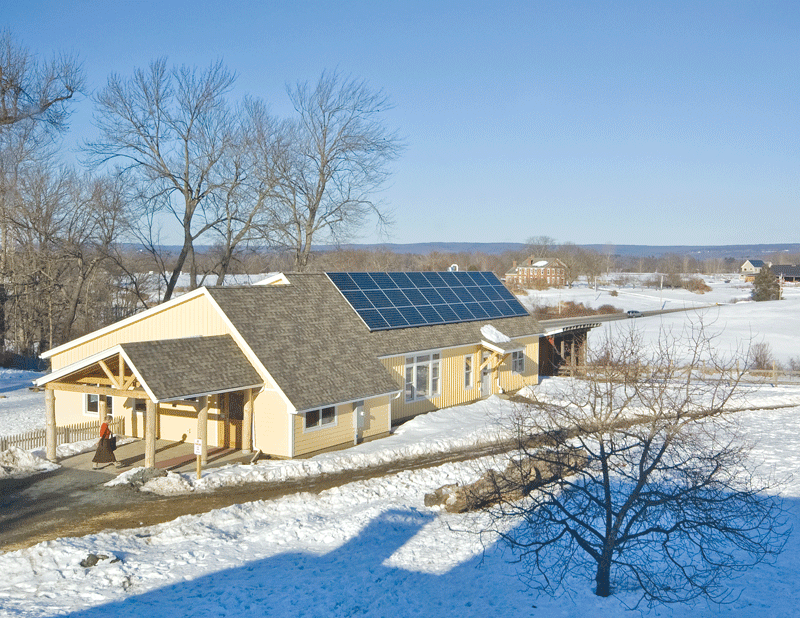 The new classroom building at the Hartsbrook School.

But cohousing remains Fitch’s calling card, and she has earned national accolades for her work in this field. Alice Alexander, executive director of the Cohousing Assoc. of the U.S., calls Fitch a “real pioneer” in getting the nationwide cohousing movement off the ground.

“Laura Fitch is one of our outstanding cohousing professionals,” Alexander said. “Not only is she an outstanding architect, but also she is adept at group process — at working collaboratively with large numbers of folks who can come to the table with diverse views. That takes talent. Laura is also committed to environmental sustainability and nurturing community for health and resilience.”

Fitch’s fusion of professional and personal interest in cohousing has proved to be an asset to her firm’s clients. “It enables me to understand what early cohousing groups are going through when it comes to making tough decisions about their money and the future,” she noted. “I can answer questions on the architecture, process, and what its like to live there as a resident.”

One of Fitch’s best ideas so far? An outdoor ping-pong table at the cohousing development she calls home.

“It reinvigorated our community life,” she said with a smile. “We all sit around the courtyard after meals egging each other on in ping-pong matches.”

It’s just one more way she has made a career — and a life — out of creating connections and community. 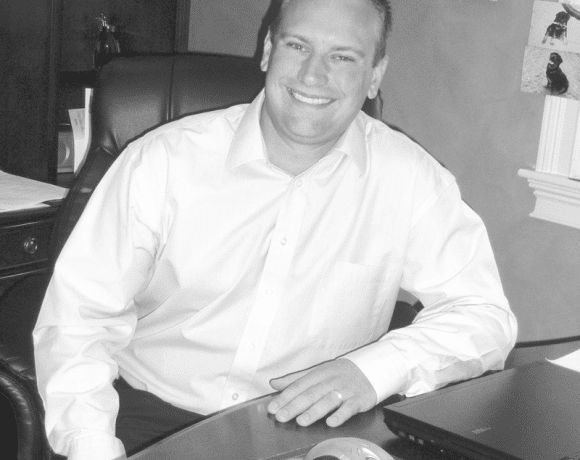 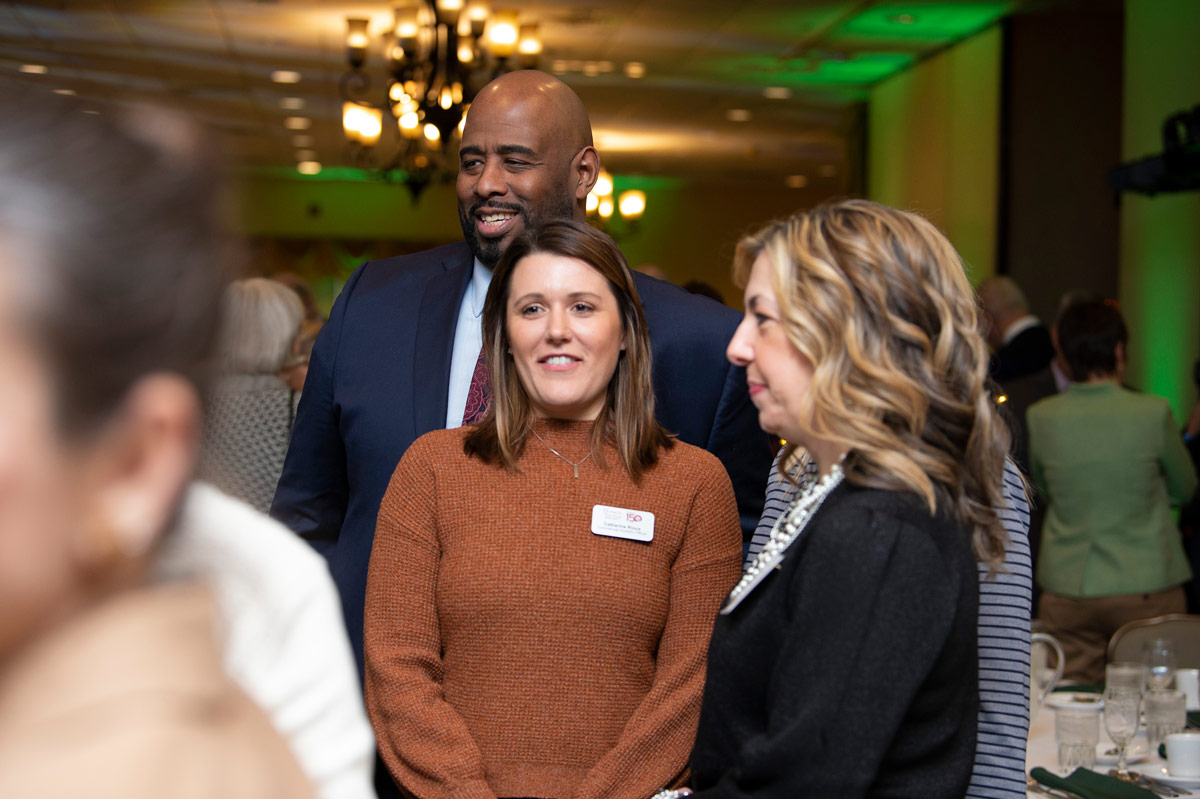