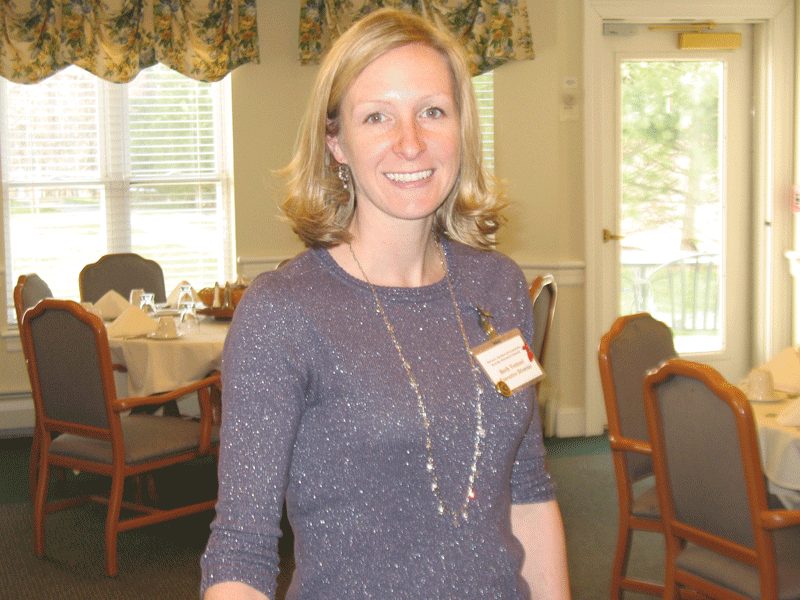 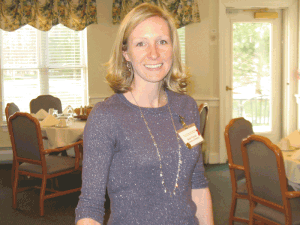 Beth Vettori says many residents discover a sense of belonging they were unable to achieve living alone.

For Beth Vettori, success in senior living is all about staying ahead of the trends.
“I think it’s really important that communities such as this one never sit back and rest on their laurels and be satisfied with what they offer,” said the exective director of Rockridge Retirement Community in Northampton.
“We are continually looking at trends and what the stakeholders — meaning the residents, families, the new generations coming up, our employees — are looking for, and where we want to go in 10, 15, 20 years,” she said. “And the only way to stay successful as a community is make sure we’re aware of those things.”
Vettori speaks from experience, having overseen a tidal shift at Rockridge since arriving on the scene less than a decade ago.
Specifically, the facility, which had been a residential-care neighborhood since its inception more than 40 years ago, opened independent- and assisted-living components in 2004 that allow people to age in place, with a continuum of service levels — everything but nursing-home care — available as residents grow older and often frailer.
“One of the things people are constantly seeking is a place where they hopefully have to make just one more move [to nursing care], and we’re able to provide assisted-living services that allow for that aging in place,” Vettori said. “We hope that people are able to stay with us through their remaining days, as we provide a full spectrum of assisted-living services, such as personal care, medication management, meals, housekeeping, maintenance, those types of things.”
And while residents become part of the Rockridge family, Vettori explained, their family members can be exactly that, rather than overburdened caretakers.
“Sometimes, when somebody is living at home, a family member is the primary caregiver,” she said. “Here, they get to become just family again — a son, daughter, granddaughter, niece, or nephew.”
In this issue, Vettori sits down with BusinessWest to share some ways Rockridge is trying to create a true home life for people who, in many cases, can no longer live at home.

Sea Change
Rockridge was founded in 1971 by Elmo Young, who was given land by the Laurel Park Assoc. He partnered with the Deaconess Assoc. of Concord, Mass. to build a 61-suite residential-care neighborhood, and that it remained for more than 30 years.
But the expansion of 2004 added 12 cottages and 30 apartments in the new independent- and assisted-living model, reflecting a quickly growing wave of assisted living across Massachusetts and the U.S.
“When I started in the assisted-living field, there were maybe 20 or so assisted-living communities throughout the Commonwealth,” Vettori said. “Now there are about 200. There’s been an explosion throughout the nation.”
Then, in 2006, Rockridge responded to another industry trend — the growing prevalence of facilities targeted at residents with Alzheimer’s disease and other forms of dementia — by opening the Gardens, an assisted-living memory-care neighborhood with 18 suites.
“With the Gardens structure, it’s a small, close-knit neighborhood, with only private suites available, and that allows for a tight-knit, very family-oriented approach,” she said. “The ratio of staff to residents is such that it creates bonds that enhance the offerings for each resident and helps them maintain their individuality.”
The goal in such a community is to program a routine of meals, cultural events, and other offerings that follow a daily structure. “That helps decrease anxiety, and it helps when residents begin to have that cognitive decline,” she explained. “They have that routine, and they don’t have to worry about what to do next. The staff is right there to keep them at their baseline and provide them with experiences to help them thrive.”
With the Gardens or the standard assisted-living model, the goal is to keep residents satisfied and healthy at Rockridge for as long as possible. Many residents, Vettori said, are surprised at how much more vibrant their lives can be when they’re part of such a community.
“That’s one of the most common quotes we hear — that people felt they weren’t ready, but after they move in, they say, ‘I can’t believe I waited so long. Why did I wait so long? This is amazing.’
“They wouldn’t be able to get that sense of belonging by themselves; here, they start participating and get back into what they enjoy doing. A lot of residents come from rural towns, but even those in bigger towns had so many barriers to participating in external community events,” she explained, such as snow and the inability to drive.
“Here, participating in life is extremely fulfilling,” she went on. “We have an extremely wide range of eclectic, diverse programs and cultural events. We offer trips to Tanglewood and the Symphony, the Bulb Show at Smith College, Gould’s Sugar House in Shelburne, and concerts on the lawn.”
Transportation is available for errands such as shopping, banking, and medical appointments, while in-house activities run the gamut from bell-chime and craft groups to bridge and mah jongg clubs; from historical groups to exercise sessions such as yoga, tai chi, walking, and strength training. 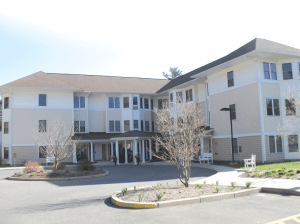 Those tend to be adaptable, Vettori explained, “so that if somebody isn’t fully able to do one of the more intense activities, they’re more than welcome to join in and do it at a modified level. For many, that means yoga in a chair is fine.”
Across the range of activities and programming, she noted, residents have a seat at the decision-making table. “The population is always changing. We have planning sessions where the residents themselves actually have a say in the programs — ‘we’re not interested in this, let’s do something else instead, this is what I want to do.’ We don’t have cookie-cutter activities or programs by any means. That goes for all neighborhoods in the community. All continually change through the years, evolving to be what people are looking for. So they have to have a say; they know what they want.”

Touches of Home
Vettori kept coming back to that concept of family, of giving residents as close to a home life as possible when the arrive.
“There’s a feeling, when people come in, of a warm embrace, like a family,” she told BusinessWest. “People know each other’s names — not just staff knowing residents’ names, but residents know each others’ names — and the atmosphere here is truly welcoming. A gentleman who came two weeks ago said he was truly thankful to all the staff members and residents who came by; he said he was surprised at that kind of support. He had heard us talk about it, but when he came here, he said, ‘this is great.’”
Vettori said she’s personally gratified at some of the conversations she has with residents and family members — not just about their living arrangements, but about each other’s lives.
“This morning I was able to sit down and talk with a resident who had been here many years, chatting about my Great Dane and dog training,” she said. “She and her husband had trained dogs — they had a dog in the top 9 in the country — and being able to share those experiences from so long ago made her light up.
“Residents say they feel that heartfelt connection, and it’s truly amazing; it’s an endorphin rush that really keeps me young, and helps keep them young as well.”
Vettori added that she tries to encourage that kind of fulfillment among her staff, who eventually become a kind of second family to residents.
“My team — not just the management team but also the frontline employees — have a true heart for this community,” she said. “Knowing that they’re happy and fulfilled in their roles gives me satisfaction. I have a hard time if I know employees are not happy in their roles.”
Meanwhile, Vettori continues to think ahead, to the needs of the Silent Generation who populate the units at Rockridge and the Baby Boomers who are increasingly joining their ranks.
“We need to be very aware of what their needs are,” she said, “by working on that advanced planning — we call them strategic advancements — if we want to continue to offer what people are looking for in the next decade, and on and on.” 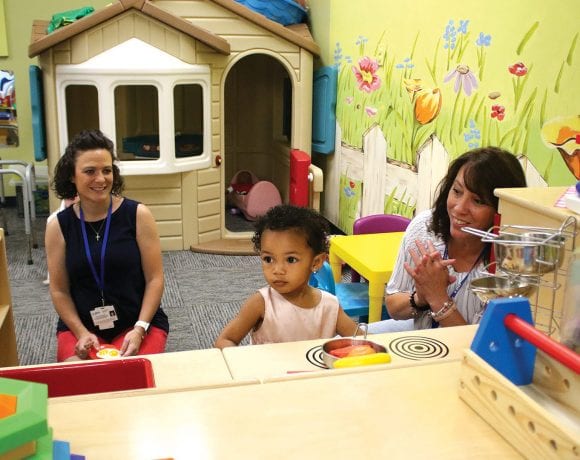