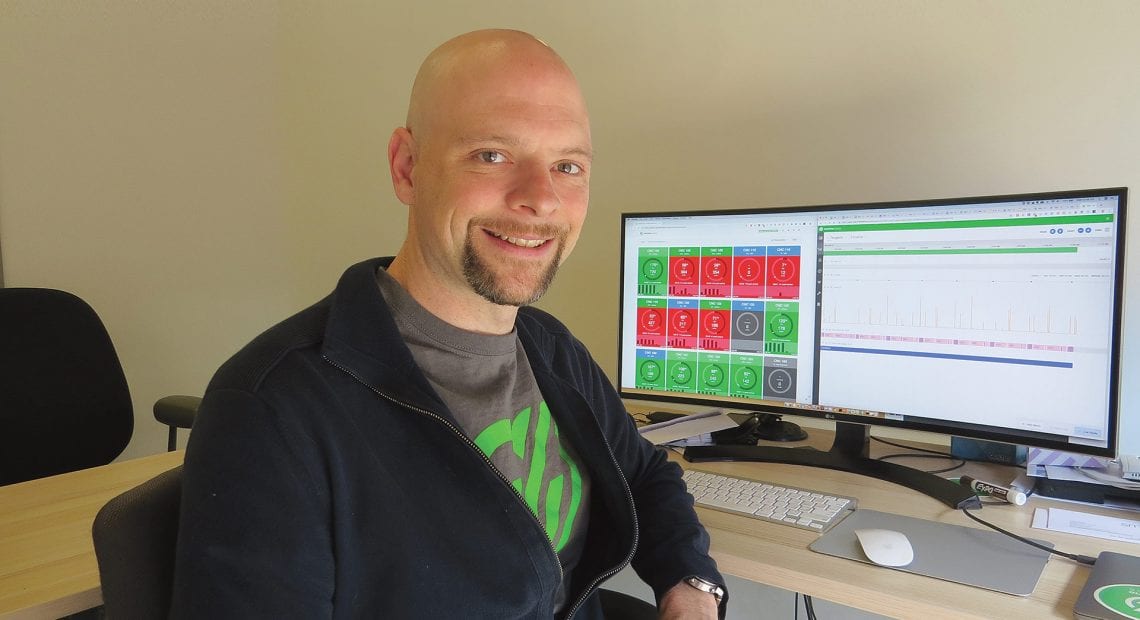 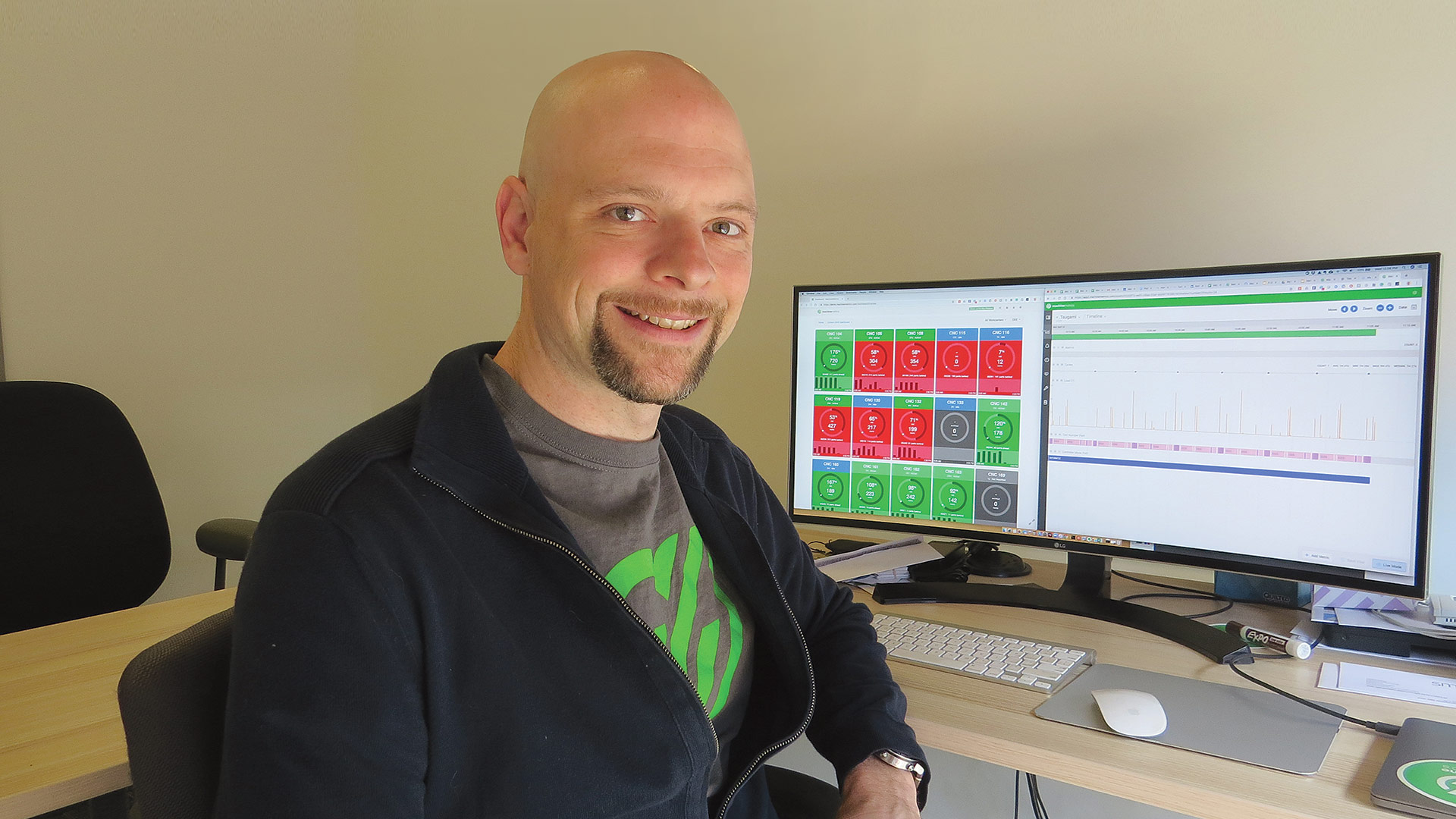 Over the past five years, Machine Metrics, a company that specializes in predictive analytics for manufacturers, has been scaling up its operation. But with an infusion of $11.3 million in venture capital last fall, this process enters a new and dynamic phase. The company has nearly doubled its workforce, expanded with a new office in Boston, and become much more aggressive in efforts to educate potential clients about its game-changing software.

Bill Bither was asked where he wanted to take Machine Metrics, the five-year-old startup he co-founded that specializes in predictive analytics for manufacturers.

He paused for a second or two, and then, in a voice that brimmed with confidence and conveyed the sentiment that he’d been asked this question — and given this answer — before, said simply and almost matter-of-factly, “we’re really looking to build a billion-dollar company.”

That’s not a phrase you hear often from entrepreneurs based in the 413, but Bither, who launched this venture with Eric Fogg and Jacob Lazier and serves as its CEO, believes that stated goal is certainly attainable. And those who have watched this company grow quickly and profoundly since it first gained attention as a member of one of Valley Venture Mentors’ first accelerator classes would certainly agree.

The company develops software systems that measure manufacturing productivity. To be more specific, these systems analyze performance in real time and send out alerts to clients when production falls behind.

Clients generally see a 20% improvement in efficiency, and the phrase most often used in relation to the software and its overall impact within a given shop is ‘game changer.’

There are now more than 100 manufacturers around the world using the company’s products, and Bither expects that number to climb steadily as awareness of the software, its capabilities, and the results it has generated for customers grows. 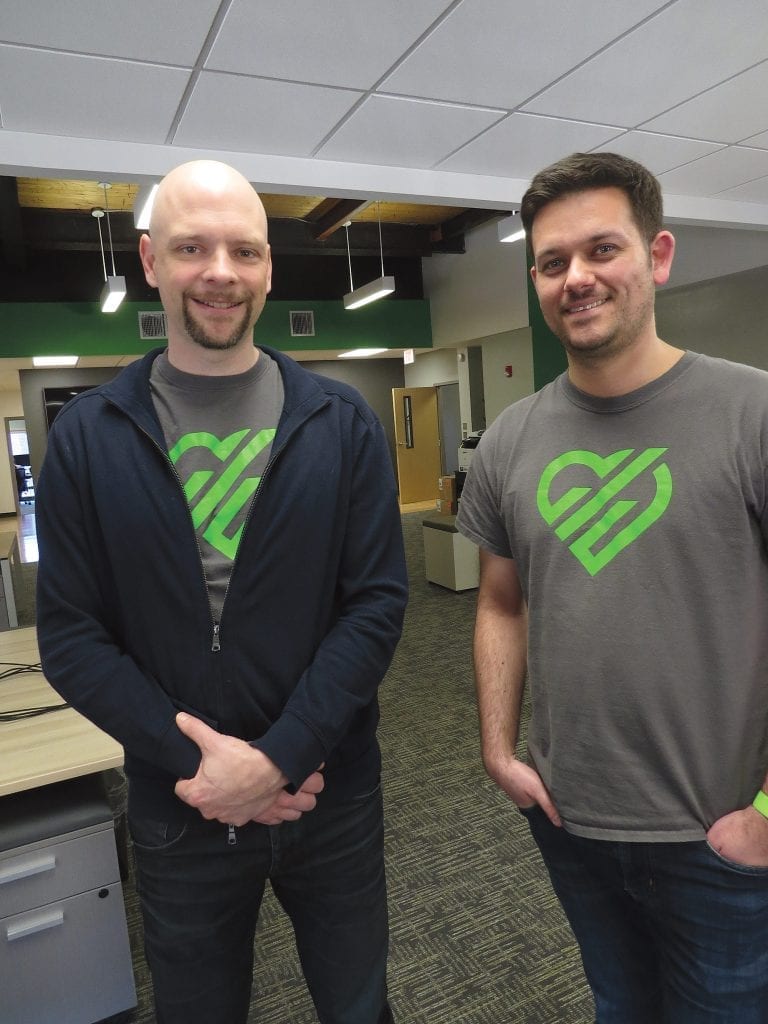 “What we’ve discovered since 2015 is that the market that we’re in is really large, and that industrial technologies are moving very quickly,” he told BusinessWest. “There’s a really high demand for companies to digitize their factories, and the key missing component to doing that is getting data from the factory floor; that’s the first step in digitizing a factory, and that’s what we do very well.”

To continue to do this well on a much larger scale, the company needed to move quickly on a number of fronts — from expanding its customer base beyond this region and this country to greatly expanding its team of engineers, salespeople, and marketers, to being far more aggressive when it comes to getting the word out.

And it has moved forward on all those fronts thanks in large part to an an infusion of $11.3 million in capital late last year.

The company has put that money to work to expand its data-science and product-development teams while accelerating global sales, said Bither, adding that, while the company has been scaling up on an ongoing basis over the past five years, that process has essentially entered a new, more dynamic phase.

“Last year, we grew about 200%, and this year we’ll probably be around that same number,” he explained, adding that this is now a truly global company that continues to expand geographically and in all other ways.

Now headquartered on Pleasant Street in Northampton — a move necessitated by the growth of its workforce — Machine Metrics has also opened an office in Cambridge, and now employs roughly 50 people, a number that has almost doubled since the company announced that infusion of capital.

“What we’re doing now is going even faster, looking at international expansion; having more engineers on the team helps us fulfill our vision quicker. We’ve shown that we’re leading the space that we’re in, and we need to keep leading the industry toward digitizing their factories.”

“We’ve doubled the size of our executive team, we’ve almost doubled the size of the workforce, and our customer count is now over 100,” said Bither. “What we’re doing now is going even faster, looking at international expansion; having more engineers on the team helps us fulfill our vision quicker. We’ve shown that we’re leading the space that we’re in, and we need to keep leading the industry toward digitizing their factories.”

For this issue, BusinessWest talked at length with Bither about the process of scaling up one of the most-watched startups in this region — and about the roadmap to becoming a billion-dollar company.

The Light Is Green

When he talked with BusinessWest earlier this month, Bither was in Toronto on vacation visiting family. Well, sort of.

“I have back-to-back meetings with clients today, which is what usually happens,” he explained. “A vacation trip turns into a work trip.”

There have been a number of work trips and vacations doubling as work trips for Bither and his partners over the past years, as they continue to bring awareness to a product that represents pioneering on a number of levels.

Indeed, while there have been production-monitoring software products on the market for some time, the software systems the company is now offering represent a huge step forward in what’s known as industrial IoT (Internet of Things) technology.

For clients, it has meant adding the phrase ‘being in the green’ to their lexicon. That’s the color that shows up on the dashboards, or large display boards, when machines are operating at or above the desired performance levels. An orange color means they are operating slightly below that level, and red means there’s trouble.

But beyond letting companies know how machines — or shifts of employees — are performing, the software can also predict when errors will occur and machines will fail, thus enabling manufacturers to avoid costly breakdowns that greatly impact overall productivity.

And as productivity improves, companies are better able to navigate what has long been the manufacturing sector’s most pressing — and perplexing — problem: a deep talent shortage that shows no signs of letting up any time soon.

All this explains why that phrase ‘game changer’ is being used so often by those who now have these systems operating in their plants. And it’s being heard both in this region — VSS CNC Inc. in Greenfield, Marox Corp. in Holyoke, and others are on the client list — and well outside it.

“We’re spread out across North America — I think we’re in roughly 40 states now,” he said. “And we’re starting to see some growth in Europe and South America. There’s still so much opportunity in this country, though, and that’s where we’re focusing most of our efforts.”

Bither, when pushed to guesstimate just how big the market is for industrial IoT technology, put the number at $85 billion, and said the mission moving forward, obviously, is to garner as large a share of that market as possible.

To do that, the company knew it had to expand its workforce, adding people in a number in a number of areas, but especially engineers in the field working with customers to digitize their factory floors.

As he talked with BusinessWest, Bither admitted he’d actually lost track of just how big the workforce was at that moment, a clear indication of how fast things are changing and how many people have joined the team.

Meanwhile, the company has also opened an office in Boston, a step taken to not only better serve customers in that area, but also take advantage of the extremely deep pool of IT talent inside the 128 corridor.

“At the rate that we’re growing, it’s difficult to hire enough really skilled people in Western Mass. quickly enough,” he explained. “We’re combining the best manufacturing talent with the best software talent, and Boston really has a heavy concentration of software executives.”

Bither, who has been through the scaling-up process before — he grew the software company Atalasoft to 25 people before he sold it — said this experience at Machine Metrics is different in many ways, primarily because the company is a venture capital (VC)-backed enterprise.

“Therefore, the focus is on growing fast, not about being profitable — that’s the life of a VC-backed technology company,” he explained. “You’re really measured in growth and cash, more so than profits, and that’s different from what I’m used to.”

Moving forward, he said one key to continued growth and effective scaling of this venture is effective website content marketing, an approach designed to help educate and hopefully inspire movement within a sector, manufacturing, that has traditionally been slow to embrace new technologies and different ways of doing things. 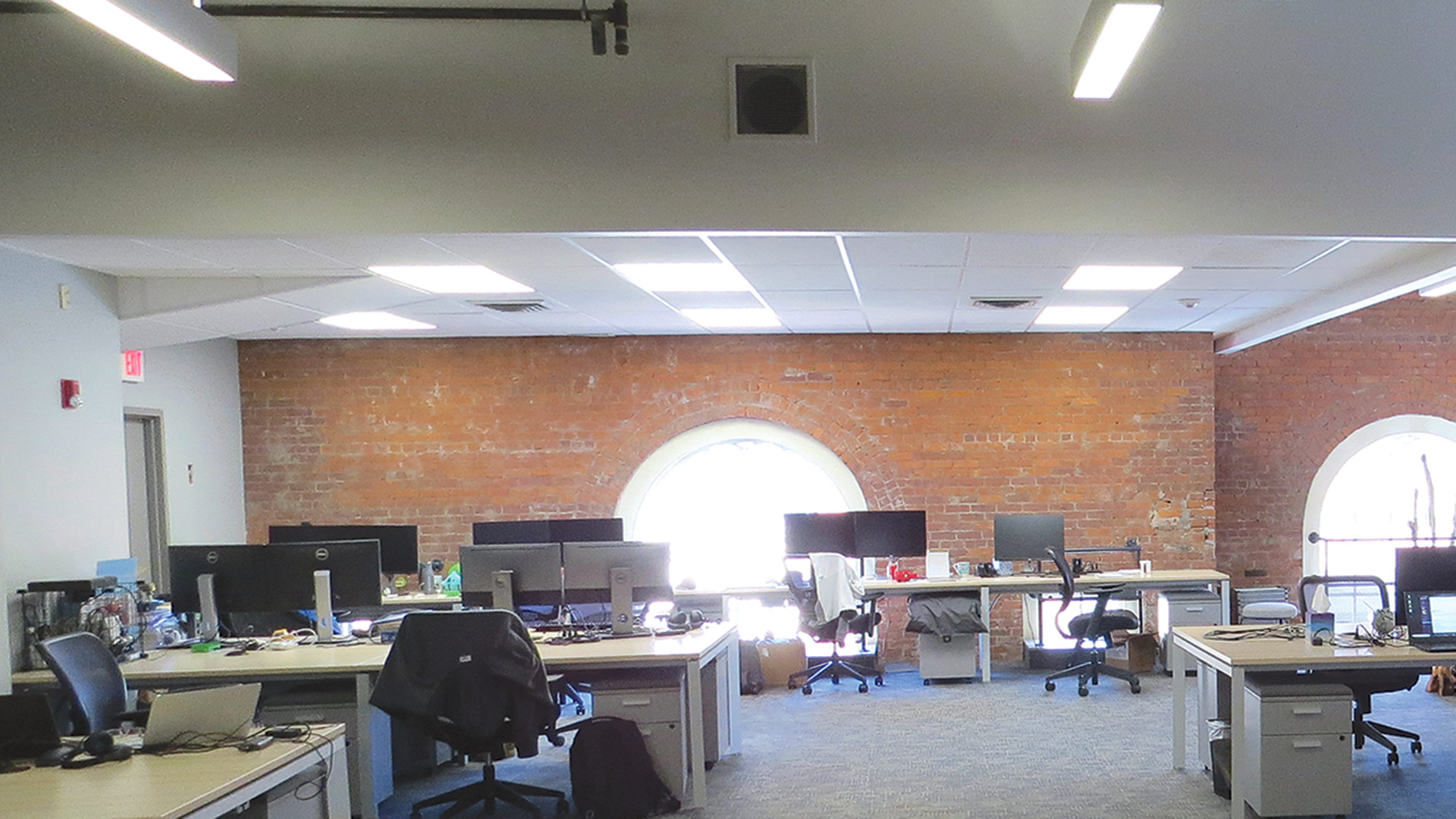 Profound growth of its workforce forced Machine Metrics to seek larger quarters, and it found them in the old Post Office building on Pleasant Street in Northampton.

Another important marketing vehicle has been industry trade shows, such as the EASTEC show slated for next month at the Big E, but also the recent event in Hanover, Germany (the company’s first international show), where Machine Metrics had a large presence and was able to introduce itself and its software to new audiences.

“It was interesting because we were able to see what the landscape looks like in Europe,” he explained, adding that the company partnered with Amazon Web Services, a subsidiary of Amazon that provides on-demand cloud-computing platforms to individuals, companies, and governments, and thus gained considerable attention at the show.

The company also takes part in the International Manufacturing Technology Show, staged every other year in Chicago, and will be in Las Vegas in a few weeks for another large industry event, said Bither, adding that this exposure is critical to those scaling-up efforts.

Getting Things in Gear

Bither did not want to disclose current revenue figures for Machine Metrics, but he hinted strongly, not that he had to, that this venture is a long way from being a billion-dollar company.

But it seems to be on a path that would make that number more than a fantasy or pipe dream. This is a fast track greased by obvious need among manufacturers large and small to be able to track their performance in real-time analytics, and not rely on guesswork.

Whether the company can get to that magical milestone — or when, obviously — remains to be seen, but the scaling-up process continues, and like those clients it serves, this intriguing startup is certainly operating in the green — figuratively, if not literally. 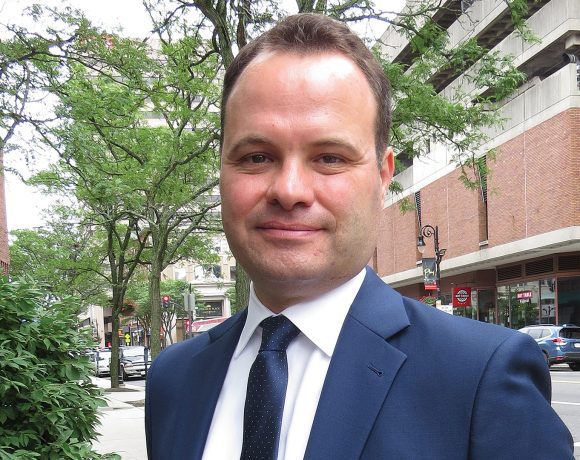