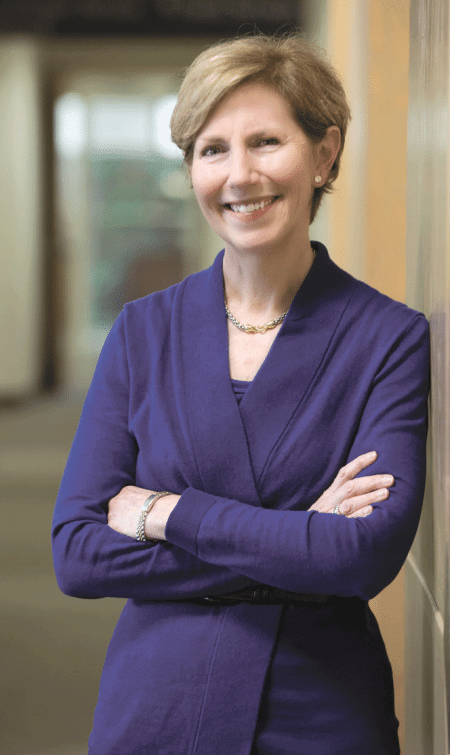 Jo-Ann Davis says her office will handle matters ranging from bond financing to mergers and acquisitions to labor negotiations — and much more.

When Baystate Health administrators decided last fall to move ahead with plans to hire the system’s first chief general legal counsel, they asked Jo-Ann Davis, serving then as Baystate’s vice president of Human Resources Consulting and Employee Relations, if she would serve on the search committee that would evaluate candidates for that important post.

She agreed to take on that assignment, but not long afterward came to the conclusion that she was at least as qualified for this position, if not more so, than the applicants she would be screening.

“I started to scratch my head and say, ‘I think that I could actually do this … I’d like to throw my hat into the ring,” she told BusinessWest, adding that, by sharing this observation with those same Baystate administrators, she went from being an assessor of candidates to a candidate being assessed.

Fast-forward a few months, and Davis now has what she considers to be the best job within what would be considered the region’s legal community.

This is a multi-faceted position, she said, one that involves everything from labor contracts to real-estate matters; from regulatory compliance to litigation management. She will also serve as primary legal advisor to the chief executive and the president’s cabinet, and chief legal officer to the board of trustees.

“This involves planning, overseeing, and managing all legal services for the system,” she said, reading directly from the lengthy job description that came with that business card, adding this is a professional challenge she fully embraces.

“I’m very excited about this for a lot of reasons,” she explained. “One, we need this role and function here. Two, there’s an excitement for me when it comes to building a department and starting from scratch, and as a professional woman, I’m very proud of the fact that Baystate, when it had the opportunity to hire its first senior leader and general counsel, they chose a woman for the position.”

Jo-Ann Davis says her office will handle matters ranging from bond financing to mergers and acquisitions to labor negotiations — and much more.
[/caption]Davis said one of the first items on her to-do list is to assemble a staff — one that she believes will eventually consist of several lawyers (perhaps five to eight) and several support staff, including paralegals. And before deciding the size and makeup of that staff, she said she must first itemize, if you will, the system’s legal needs and then decide how best to meet them.

Historically, the system has contracted with several area firms to handle matters ranging from bond financing (for the massive, $353 million Hospital of the Future project, for example) to mergers and acquisitions to labor negotiations. And it will continue to do so with the new general-counsel structure, although more matters will now be handled in house.

Davis said the Baystate system has long considered adopting the general-counsel model — one used by most major corporations and health systems — and new President and CEO Mark Keroack, who took the helm 11 months ago, made it one of the priorities of his administration.

“As the system grows and expands, and as healthcare and health law become increasingly complex, you need to have in-house counsel so you have that expertise at your fingertips,” she explained, adding that, while the system is expecting to lower its overall legal bills through this model, the primary motivation is to more effectively manage (that’s a word she would use often) the myriad legal services required by a system of Baystate’s size.

For this issue, BusinessWest talked at length with Davis about her new role and all that entails.

Davis began her law career in 1982 as a human-resources consultant for the Springfield-based law firm Sullivan & Hayes, where she landed after earning first a bachelor’s degree in political science at Wheaton and then a master’s in education at Harvard.

She would add a juris doctor to her educational résumé in 1988, graduating from Western New England University, and became an associate with Sullivan & Hayes that year. She made partner in 1994 and remained with the firm until 1998, when she joined Springfield-based Skoler Abbott & Presser, becoming a partner in 1999.

At Skoler Abbott, she worked with a wide range of clients, developing strategies with regard to the many aspects of employment and labor-law matters, and representing them in federal and Massachusetts courts and before such bodies as the Equal Employment Opportunity Counsel (EEOC), the Mass. Commission Againt Discrimination (MCAD), and the National Labor Relations Board. Baystate wasn’t one of her clients (although the firm did some work for it); however, the system became the next line on her résumé.

In those latter roles, she built, developed, and managed the department, supervising six HR directors system-wide and leading a staff of 25. She also handled the full gamut of employment and labor-related matters, including employment litigation in state and federal courts, before the EEOC, MCAD, and other bodies.

It was the breadth and depth of her experience with the system, and also in private practice, that convinced her she was capable of handling the general counsel’s role — and not merely coordinating the search for that individual — and those who did conduct that search eventually came to the same conclusion.

Indeed, Davis, who prevailed over a host of candidates from across the country, took on her new role in late March. And she’s spent the past two months undertaking that aforementioned analysis of the system’s legal needs.

“A big part of my role is to build the department,” she explained, adding that this means analyzing how much is spent (she said she was still getting her arms around the budget), where it’s spent — in business transactions or employment and labor matters, for example — and then determining what types of lawyers should be hired (meaning which aspects of the law they specialize in) as well as which work will be handled in-house and which assignments will be contracted out.

“This analysis is typical of what any general counsel’s office would do,” she went on. “You have to decide what your bread and butter is — what you can handle internally — and what is too complex and sophisticated, where you really need specialists.”

This will be an involved analysis, she continued, adding that she expects it will take several months to determine the size and character of her staff and fill those positions.

When it’s staffed and operating, she expects that the general counsel’s office will bring more efficiency to the task of managing the system’s legal matters, simply because those individuals are in house and employed by Baystate.

“I sit on the president’s cabinet, and when we meet weekly, there isn’t an issue or strategy or business imperative, or any discussion around patient care, that doesn’t involve or have legal implications,” she explained. “To have that expertise sitting at the table, in the moment, is invaluable.”

Using the Hospital of the Future as an example, she said that huge project involved everything from bond financing to regulatory compliance matters to construction issues. Outside counsel was used for each aspect of that initiative, but with the general-counsel model, many, though certainly not all, of these matters can be handled in house.

“Areas that are very sophisticated, that are not done on a day-to-day basis … you still want to contract those out,” she explained. “But things internally that we’ll be doing include general contract review, employment and labor relations, physician contracting, professional-services agreements, and much more.”

As she talked about why she left private practice and a partnership with one of the region’s leading employment-law firms to join Baystate a dozen years ago, Davis said there were many motivating factors, but primarily a desire to represent one client, not a portfolio of them.

“When you work for a private firm, a lot of it becomes marketing your own services instead of practicing law,” she explained. “I got to the point where I wanted to represent one client; you form deep relationships with that one client, and you have a vested interest in the success and opportunities of that one client.”

Today, she’s not only representing that client, but representing it as general counsel. That role represents a host of responsibilities, but a tremendous opportunity as well. “As a lawyer in this community, I have the best job,” she said.

Not bad for someone who was originally asked to weigh the candidates for that job.