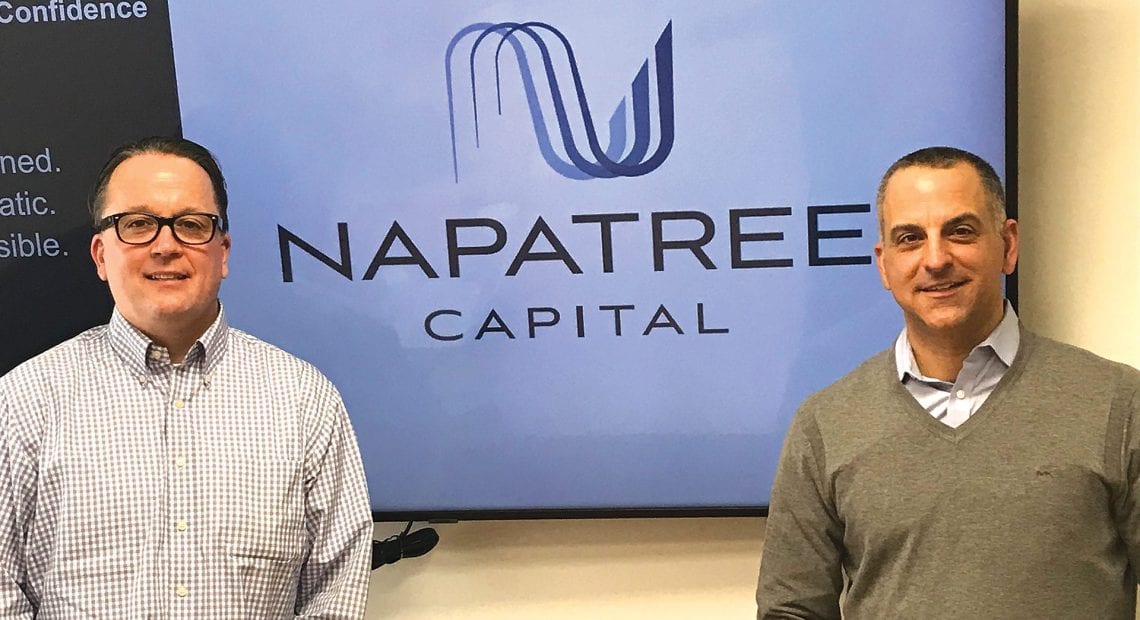 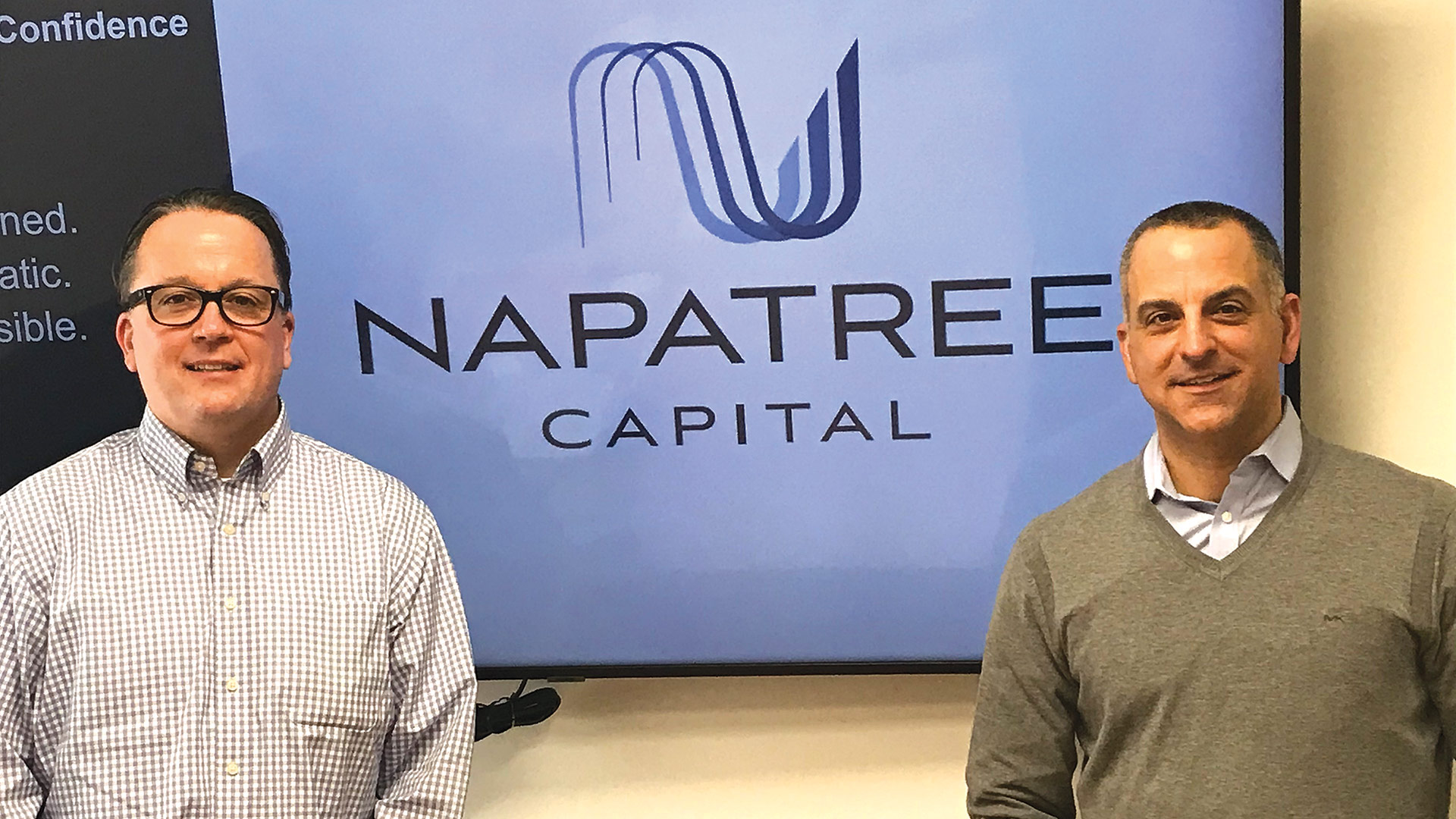 Matt Landon and Jeff Liguori saw an opportunity for Napatree Capital to better serve Western Mass. out of its new location in Longmeadow.

Liguori, founder and chief investment officer of Napatree Capital in Providence, R.I., relocated to Western Mass. in 2015 and began to sense increasing demand for his firm’s services in this area. In January, he hired longtime acquaintance and Western Mass. native Landon as a partner in the firm. Together, they discussed opening a local office, and on Feb. 1, Napatree Capital opened its five-person firm in the restored mansion in Longmeadow’s center.

While Napatree could have served clients here from Providence, Liguori and Landon both thought it was important to have a physical presence in Western Mass.

“It was serendipity that there was one opening left in the Brewer-Young mansion,” Landon said. “We felt this iconic and different building fit with our image, so we jumped on the opportunity to locate there.”

Liguori, who grew up in Westerly, R.I., named his firm after Napatree Point in Watch Hill.

“Our investment committee is skilled at finding temporarily undervalued, underloved, and underappreciated companies that are selling at a discount. But we feel they’ll get the recognition they deserve in the near- or medium-term horizon.”

“It’s a beautiful stretch of beach where I’ve spent many summers,” he said. “As the southwesternmost point of Rhode Island, it separates Block Island Sound from Long Island Sound, so it really splits Rhode Island from New York.”

Because he liked the symbolism of its location and the relative obscurity of the name, he sought copyrights for several variations of the Napatree name in anticipation of one day starting his own firm. “Very few people have heard of it; even many Rhode Islanders don’t know Napatree Point.”

Liguori explained that his firm specializes in two areas: working with private investors looking to reach long-term financial goals, and managing endowments for nonprofits, which he called a growing area of business.

The firm’s business philosophy starts with ‘value investments,’ which Liguori says has to do with how a stock measures up against its industry or sector. The firm has had success taking a contrarian approach by investing in companies that are currently under the radar and might be underpriced by the market.

“Our investment committee is skilled at finding temporarily undervalued, underloved, and underappreciated companies that are selling at a discount,” Landon explained. “But we feel they’ll get the recognition they deserve in the near- or medium-term horizon.”

Landon also made it clear that Napatree takes the long view toward investing. “We’re not traders; we are long-term owners of companies.”

All advisors at Napatree are fiduciaries, meaning they can only recommend investments that are in the client’s best interest. By contrast, financial advisors who are not fiduciaries are held to a much more lenient ‘suitability’ standard. For example, two index funds based on stocks listed in the Standard and Poor’s 500 may seem similar on the surface. If one fund charges high fees and the other low fees, they are technically both suitable investments. A fiduciary, however, is required to recommend the fund with the lower fee because it is better for the client. Landon pointed out that he enjoys sticking with a fiduciary approach.

“It makes doing business very simple when you operate from a fiduciary standard,” he explained. “If you do what’s in the client’s best interest all the time, it’s an easy path to follow, and everyone wins.”

Liguori pointed out that growth in his business comes in two ways: investment performance and taking on new clients. When the world came to a halt last March, however, meeting with potential new clients became extremely difficult. As advisors and investors, Liguori and his colleagues listened to the concerns of panicked clients, while at the same time they continued to research and act on investment strategies.

“We are also business owners worried about our business,” Liguori said. “We saw assets evaporate, so that meant our fees went down 30%.” Digging in and working harder was a key to getting through the trying times, he added. “As the founder of the firm, and on a personal level, I couldn’t be more grateful for where we are now after what we went through last March.”

Landon added that the pandemic strengthened client relationships as communication became more important and frequent, especially for clients whose industries were hit hard by coronavirus. While there are clear challenges and roadblocks ahead, the market horizon looks further out and toward more recovery.

“We try to reinforce to our clients that better earnings and brighter days are ahead, along with being empathetic to where they are right now,” Landon said.

After a slowdown at the beginning of COVID, Napatree saw a big uptick in the fourth quarter of last year. Liguori said that set the table for projected 20% growth in 2021.

“The last 12 months have been similar to a full market cycle, something that usually takes place over a five-year time period,” he said. “Clients who were full-on panicked in the beginning and were able to stay invested are now reaping the rewards of their patience.”

He admitted that even clients who have stayed invested are still anxious about the future. Most concerns are ones that existed long before COVID-19. In addition to parents who worry about saving enough for their children’s college education, the number-one concern Landon hears involves retirement.

“About 80% to 90% of the people we talk to have not been trained in investing; they would rather be gardening or hiking. So, if we can help put them at ease and feel good about the path they are on, it’s enormously rewarding.”

“People often ask if they will have enough to retire comfortably and live with dignity,” he said, noting that, because people are living longer, financial planning for retirement now involves making sure people have money for up to three decades after they retire.

Recent findings prove the point. Data from the CDC shows the average life expectancy for everyone born in the U.S. to be 78.9 years, but when calculating life expectancy after reaching age 65, it’s a different story. According to 2018 findings from the Society of Actuaries, there’s a 50% chance that a 65-year-old male lives to age 87, and that a 65-year-old female lives to age 89. For couples at age 65, there is a 50% chance at least one of them will live to age 93, and a 25% chance one will live to 98.

Disruptive events, like pandemics, can create the kind of fear and anxiety in people that lead to bad decision making in their efforts to reach long-term savings goals such as college and retirement.

Liguori said behavioral investing, whether it’s driven by fear or greed, usually leads to dangerous outcomes. His firm looks to avoid the herd mentality that can happen during volatile markets and instead focus on the client’s long-term objectives. He noted the GameStop stock bubble as an example that may look good in the near term, but the usual outcome for a small investor in events like this is disaster. Napatree’s philosophy, Landon added, is the exact opposite of chasing bubbles.

“We want to buy compelling long-term businesses that are selling at a discount right now because we’ve researched the likelihood they will be going up, not down,” he explained, adding that, when Napatree recommends a company to a client, the firm also own it.

“When we believe in an investment, it’s where we are putting our own money as well,” he said. “We think it’s important to show that we invest in the same companies as our clients.”

Another part of Napatree’s business involves helping small and medium-sized companies manage their employee 401(k) programs. Landon said the firm works with a couple dozen businesses to make sure programs are designed well and priced fairly, and that employees feel confident about participating in the plan.

“About 80% to 90% of the people we talk to have not been trained in investing; they would rather be gardening or hiking,” he added. “So, if we can help put them at ease and feel good about the path they are on, it’s enormously rewarding.”

Landon said he and his colleagues love to meet with people to dissect their financial situations, and if it leads to someone being a client, that’s even better.

“We’re excited to be here in Western Mass. to expand the Napatree footprint,” he told BusinessWest. “We look forward to helping a lot of people and doing good things in the community.”