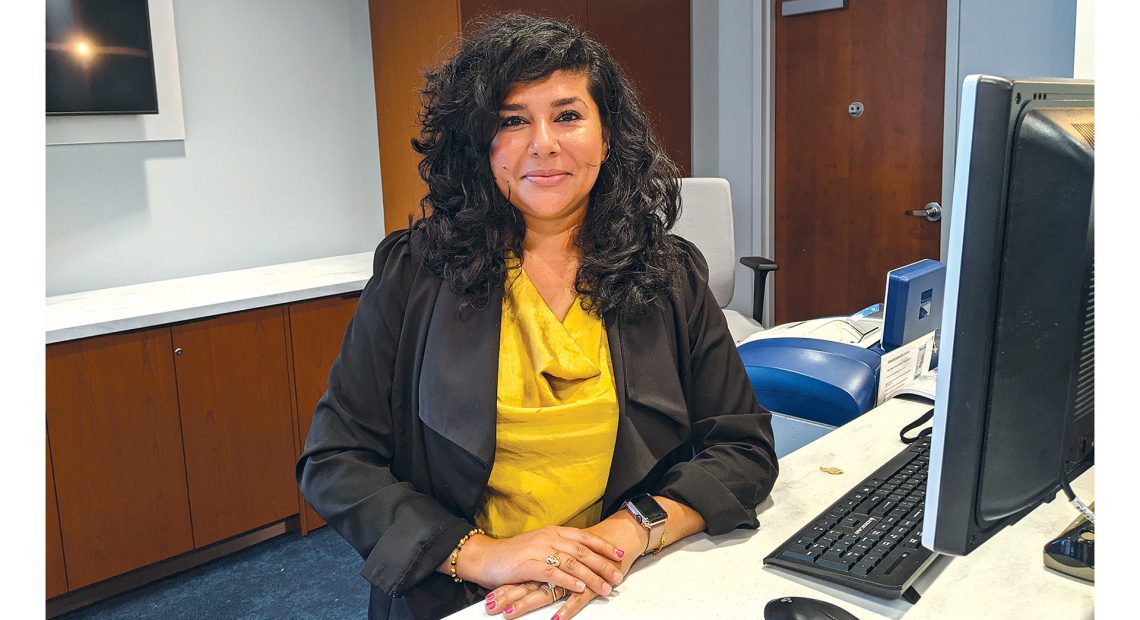 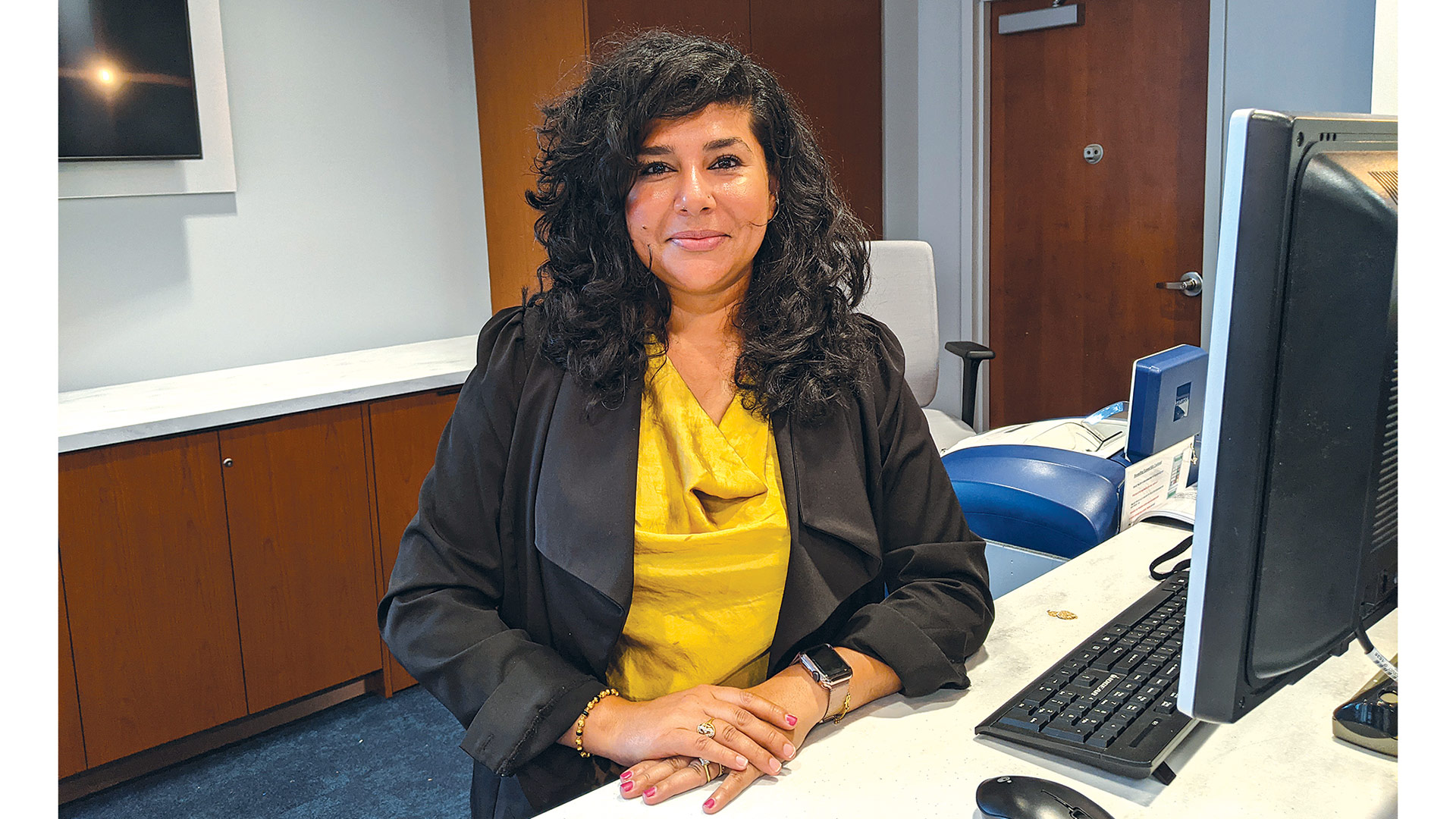 Holyoke-based PeoplesBank recently expanded its presence in Connecticut with a branch in West Hartford. The new location is projected to help the bank grow its already considerable portfolio of consumer and commercial business from south of the border, especially in an ongoing climate of mergers and acquisitions.

When PeoplesBank opened its newest branch in West Hartford on August 30, it wasn’t exactly its first foray into Connecticut’s capital region. Far from it.

“This is a retail opening in West Hartford, but half of our commercial business is in Connecticut already — actually, about 60%,” said Matt Bannister, the bank’s senior vice president of Marketing & Corporate Responsibility.

“Some is up in the Granby-Windsor-Suffield area,” he went on, alluding to PeoplesBank’s first three Connecticut locations, in East Granby, Suffield, and West Suffield. “Some is down here in the Hartford region, and it actually goes all the way down to the shore. We’re kind of catching up with this retail storefront because the commercial customers want a presence here. They’ve been saying to us, ‘come down to Connecticut.’ And West Hartford just makes sense; it’s a great community, and a good place to be.”

“We absolutely need it. The majority of our new accounts are still opened at brick-and-mortar locations. For more complex conversations, customers want to talk to a person, and they want to have that live interaction. There still is a need for that face-to-face contact.

“I think what the industry is trying to do with the self-service channels — with online, with mobile, with video bankers — is give people the ability to do the quick, day-to-day transactions when they want to, without having to park and go in and talk to somebody, and get it done quickly,” she went on. “The banking centers are there for when they need a little more contact, when they have a little more complexity, or they just want to expand their relationship. We need to make sure we have everything.”

Michael Oleksak, executive vice president and chief lending and credit officer, said all those Connecticut dollars in the bank’s commercial portfolio have not come mainly from the Granby-Suffield area, but predated those physical locations. 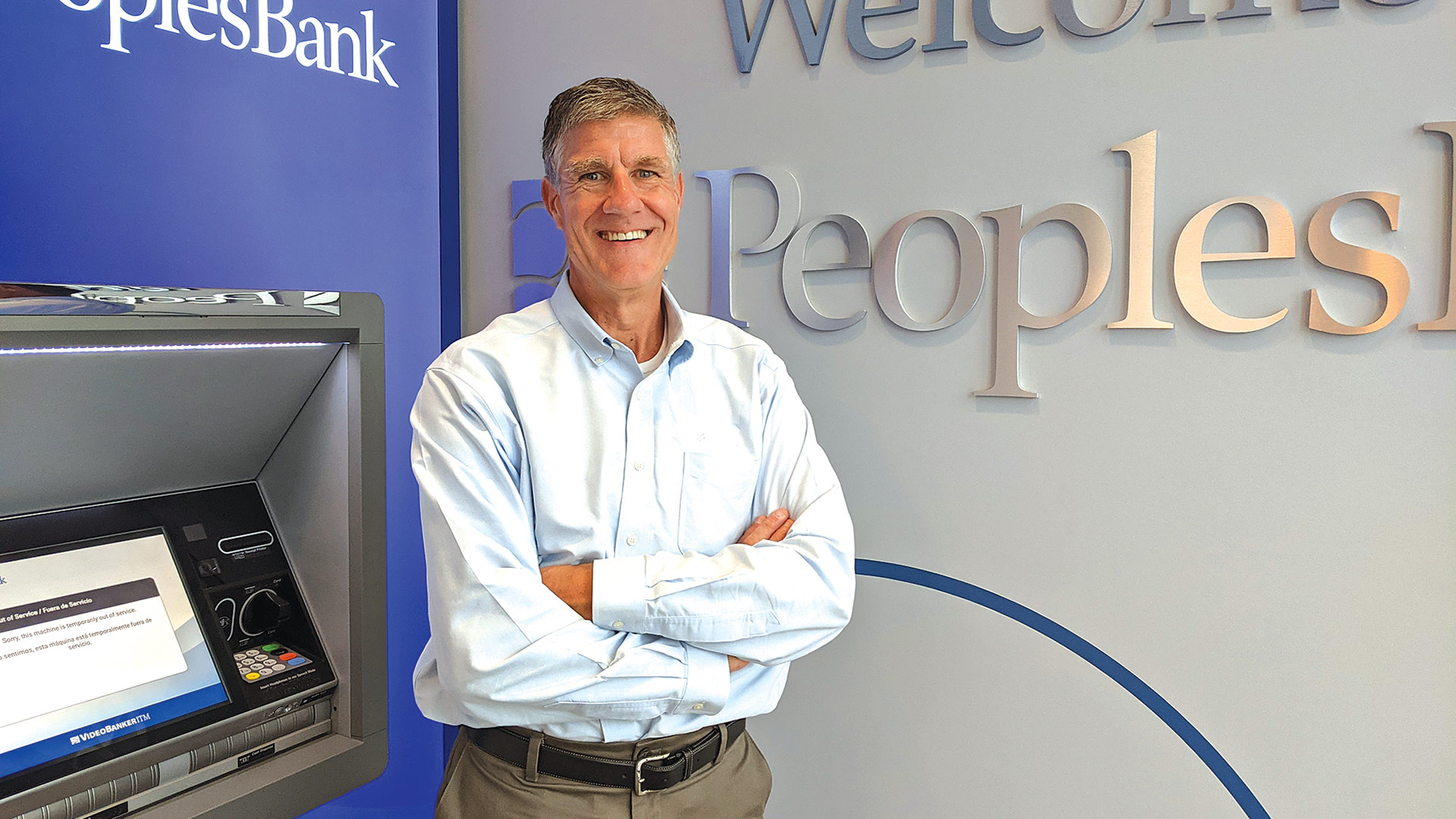 “We have a significant amount of business in the Greater Hartford area, specifically in the Farmington, Glastonbury, West Hartford communities and downtown Hartford, but we also go as far as New Haven and Greenwich. So our tentacles are fairly long when it comes to our Connecticut presence.

“Most of that is in commercial real estate, which tends to be more transactional,” he went on. “We are able to do a lot of full-service banking for these commercial real-estate customers because of our cash-management expertise and the different products we have, but without a branch presence, it’s really difficult to do business banking.”

The branch presence in West Hartford allows the team to do more commercial and industrial (C&I) lending, and complements a recent expansion of the bank’s C&I team with former TD Bank veterans, Oleksak noted.

“We have a very strong following now, and I think by having a physical presence there, we’ll become a more visible part of the community,” he went on. “We do support our current borrowers, including with a lot of their philanthropic initiatives, but it’s kind of behind the scenes because we don’t have a presence there. But with a physical presence, and with the disruption in the market with the M&T acquisition of People’s United, it will really open the door for us to be a bigger part of the community.”

De Maria agreed. “We’ve already created such a solid foundation with our name and then with the physical presence from the acquisition we did in Suffield in 2018,” she told BusinessWest. “And now, with our West Hartford presence, I think we have a solid opportunity to bring the service we provide for our commercial customers to our retail-customer world, and really marry those two sides together and make an impact.”

Many visitors to the new branch will first notice the interactive video tellers, one in the entry and one in the drive-thru lanes, bringing the bank’s total number of such machines to 22 at 17 locations. Users can call up a live teller in Holyoke who manages four or five machines at once.

“That way, we can be open seven days a week and have extended hours and not have to have people physically in the branch. And the video banker can do almost any transaction,” Bannister said, noting that Peoples is the only bank in the Hartford to offer the service. “Part of our technology story is good, consumer-facing technology.”

Romika Odedra, vice president and regional manager, said customers appreciate face time with a live person rather than interacting with a machine and the more limited options available at an ATM. And Bannister added that, with the pandemic still raging, many customers appreciate being able to conduct complex transactions in a contactless way.

“We are able to do a lot of full-service banking for these commercial real-estate customers because of our cash-management expertise and the different products we have, but without a branch presence, it’s really difficult to do business banking.”

“Video tellers are something we’re proud to bring to the market,” De Maria said. “It brings seven-day-a-week banking to West Hartford and our surrounding areas.”

Once inside the branch, customers will see pods instead of traditional customer lines — a model Peoples and other banks have been implementing for years. Customers can stand beside the teller and even see what he or she is looking at on the computer screen, if necessary. “In the beginning, people were like, ‘where do I go?’” Odedra said. “But it’s so easy — it’s warm, it’s welcoming, it’s not ‘there’s the line.’ It’s nice to have that one-on-one experience.”

The branch also employs a ‘universal banker’ model, Bannister said. “Any bank employee you see out here can do all the transactions. You can go to a teller pod or pop into an office if it’s more convenient or you just want privacy to have a conversation.” In other, more specialized offices down the hallway from the main area, he added, the bank will offer a mortgage expert, a wealth adviser, and other ancillary services.

And in front, at the main entrance, is a high table, couch, and coffee bar. “We’re trying to say to people, ‘come on in and hang out; get to know us a little bit,” Bannister said. “The thought is, we want to have sort of an open storefront.”

That’s partly to reflect the neighborhood the branch is in, with restaurants and small shops lining the streets and the shopping and dining mecca Blue Back Square just down the road.

“This area really is hopping with foot traffic,” he said. “And if you’re a bank with a retail storefront, you want foot traffic.”

Those who drive to PeoplesBank will appreciate the free parking lot the bank shares with the town’s Post Office.

“I used to work at a different bank, and that was the biggest issue we had, the parking,” Odedra said. “I’m so glad we have the parking we have. We don’t have to rush the customer out; we have time to have that one-on-one with them and invite them to have a cup of coffee.”

Bannister said West Hartford has been an enthusiastic town to work with, from its Chamber of Commerce to local economic-development leaders.

“Right from the start, when we were saying we wanted to come down, they were like, ‘how can we help?’ We’re in a lot of communities, and some of them are very welcoming, and some are maybe not so much. This one has been great to work with.”

The branch is fully staffed as well, with a mix of on-site and hybrid workers, reflecting the current makeup of the entire PeoplesBank organization. Some are West Hartford natives who know the market, Bannisher said, while some were attracted by working near all the nearby restaurants and other neighborhood amenities. 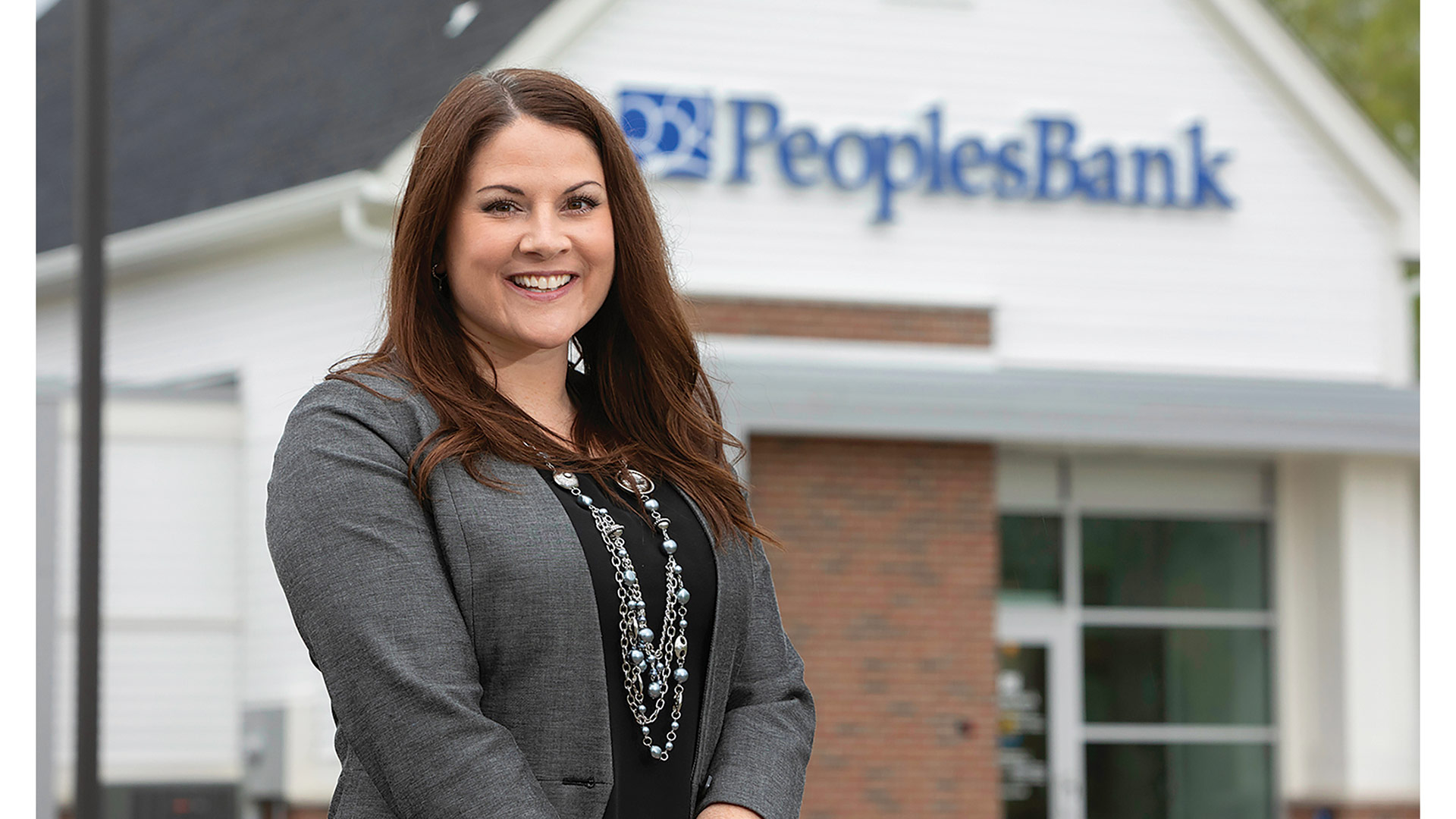 Even in an age of mobile banking, Aleda De Maria says, people still want face-to-face interaction at branches for many services.

There’s room to expand in Hartford County, he added, with plans to open at least two more branches in the next couple of years.

“We’re coming in with a message of ‘we’re here, and we’re here to stay, and we can do everything the big banks do, but with a local feel and local decisions,’” De Maria said. “And I think that’s what’s missing in banking in general nowadays — being able to bank how you want to bank but also at a community bank where you don’t have to worry about who’s going to buy them.”

That presence means civic involvement and philanthropy as well, Bannister said, noting that PeoplesBank plans to give close to $60,000 in the first month alone to local organizations like Habitat for Humanity, Hands on Hartford (which assists with food pantries and the homeless population), the United Way, Foodshare, and even two West Hartford community events the bank will sponsor this fall and next summer.

“Right from the start, when we were saying we wanted to come down, they were like, ‘how can we help?’ We’re in a lot of communities, and some of them are very welcoming, and some are maybe not so much. This one has been great to work with.”

“We feel like we’re leading with the values we want to be known by in the community, which are innovation, technology, customer service, and the community support.”

De Maria agreed with Bannister than broadening the bank’s footprint in Connecticut is a must. “We will continue to actively look for physical locations, primarily in Hartford County,” she said. “We’re not opposed to outside Hartford County should it make sense, but in Hartford County, we feel we have an opportunity for our brand to really make an impact in the community.”

And that means expanded business, including commercial lending, Oleksak said. “I think there’s tremendous opportunity in this market for us, given our size and the experience of our lending staff. We’re very diverse, and between small business, large commercial real-estate loans, and now C&I expertise, I think we bring a lot to the table. It’s a great opportunity for us.”

BusinessTalk with David Godaire, president and CEO of MassHire Holyoke