Pieces Falling into Place for Revival at the Paramount 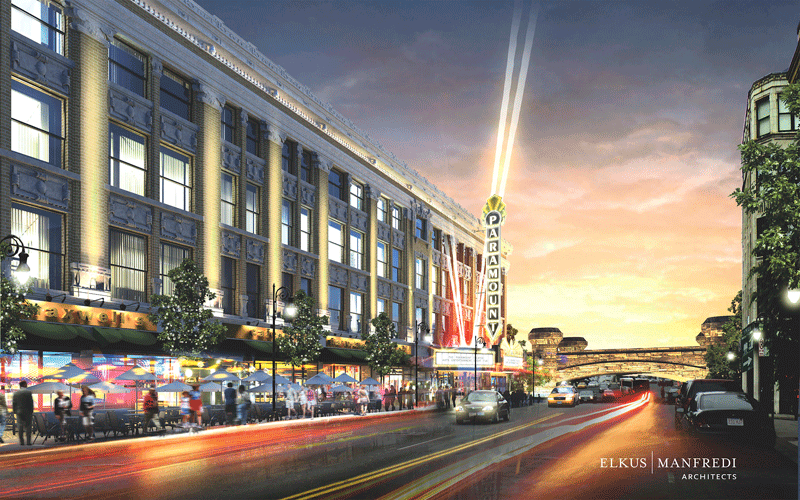 Like all those who have fond memories of taking in movies and shows at the Paramount Theater, Herbie Flores has long dreamed of the landmark’s revival. But nostalgia has never been enough of a force to generate a rebirth. What’s needed is a viable plan, financing, and a vibrant downtown that can fuel such an ambitious venture. Flores, who calls himself “a realist, not a dreamer,” believes the needed pieces to the puzzle are falling into place.

Herbie Flores doesn’t have to look far to find some inspiration as he moves forward with ambitious plans to restore the historic Paramount Theater complex in downtown Springfield.

All he has to do is glance across Main Street.

With a slight turn of the neck, one can see the parking garage attached to the massive, nearly $100 million renovation of Union Station, which has been enjoying a nearly two-month-long coming-out party this spring.

“How long did it take them to get that done?” he asked in reference to the station, knowing the answer was four long decades marked by doubts, conjecture, and countless starts and stops. “They didn’t give up on it … they kept at it, and they got it done.”

I’m a realist, not a dreamer. I know what it takes to make something like this a reality.”

For more inspiration, he can look farther north on Main Street and a project in his own portfolio. That would be the comprehensive, $14 million rehabilitation of the Memorial Square Apartments completed this spring.

But Flores, president of the New England Farm Workers Council, which owns the Paramount property among a host of others along that stretch of Main Street between Fort Street and the Arch, has never really lacked for inspiration when it comes to the Paramount and adjoining Massasoit Hotel.

Indeed, he has long been motivated to revitalize this landmark steeped in history, only he’s understood from the outset that proper motivation isn’t nearly enough.

“I’m a realist, not a dreamer,” he said, before admitting quickly that one probably has to be both when it comes to this project. “I know what it takes to make something like this a reality.” 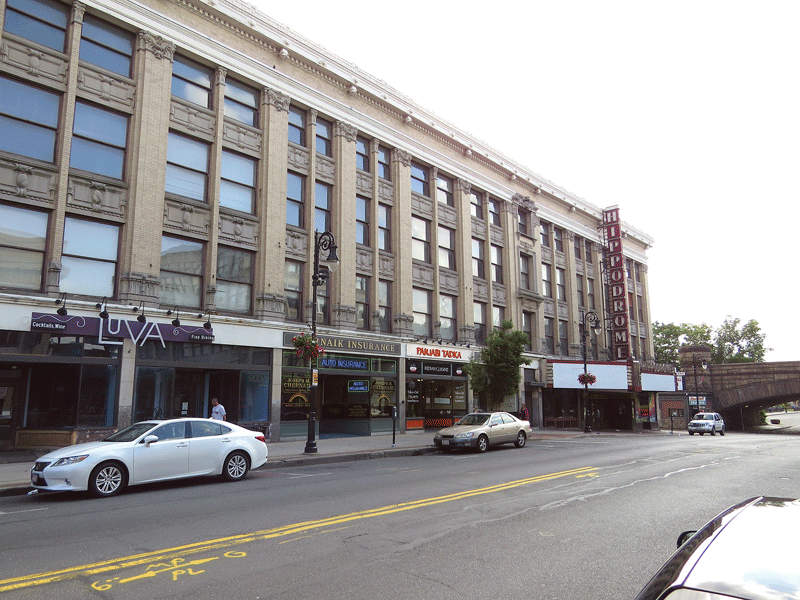 Herbie Flores says that, with the Union Station project completed and MGM Springfield set to open in 2018, the Paramount project takes on greater significance.

It takes a number of pieces to fall into place, he went on, adding that this is what is finally happening, starting with a City Council vote on June 19 to approve a $3.65 million loan application with the U.S. Department of Housing and Urban Development (HUD) to put a much-needed new roof on the property, replace windows, and undertake façade work, steps that will secure the structure, prevent further deterioration, and put a somewhat new, more modern face on the city landmark.

Another piece falling into place is the securing of private financing for what will likely be a $40 million project when all is said and done, said Flores, who believes the curtain could rise again at the Paramount in early 2019 or perhaps even earlier.

“I’m very confident that we’re going to make this happen — it’s real,” he said. “Over the years, many of Springfield’s older buildings have been torn down and replaced with new ones. But this is in the heart of the city, and we don’t need to tear it down; I think this could be a crown jewel for Springfield.”

As he talked about the Paramount and his plans moving forward, Flores said recent developments in Springfield, including Union Station, MGM Springfield, and others, have raised the stakes for the Paramount project, and in several ways.

Indeed, he said those initiatives underscore the need to get the Paramount project done, and they raise the bar in terms of the scope and character of the project.

“Now that we have this casino and the renovated Union Station, we have to take this project to a higher level,” he explained. “We need a project that reflects all the great things happening in Springfield.”

“With the bookend projects, MGM and Union Station, now done or nearly done, it only makes sense to move forward with what are arguably the two most difficult projects — the Paramount and 31 Elm Street,” said Kennedy, referring, with the latter, to long-discussed efforts to create new uses for a former hotel adjacent to Court Square.

“With 17,000 people coming to Union Station every day and another 10,000 people visiting MGM each day, it doesn’t make sense to leave that eyesore in its current condition,” Kennedy went on, referring to the Paramount.

Kennedy put the Paramount on the ‘most difficult projects’ list for a reason — actually, several of them. First, the landmark has become greatly deteriorated in recent years, as that leaky roof has allowed water to enter and wreak havoc. Also, the project needs to make sense from an economic perspective, meaning recovery of the huge investment needed to restore the property to its former state.

Flores firmly believes that a hotel/theater complex can and will be viable, especially as Springfield continues to stage its own revival. For this issue, he talked with BusinessWest about how the curtain may soon rise and usher in a new chapter in the history of the Paramount — and the city itself.

As he talked about the Paramount project, Flores, who never sits still for very long, got up from his seat and went to retrieve a book someone gave him a while back.

Titled After the Final Curtain, it’s a coffee-table book of sorts crammed with powerful photos of grand old theaters, most of them built a century or more ago during the heyday of such movie palaces, in various — and usually serious — states of decline.

While there are a few stories of successful restoration and reuse in this mix — the $90 million rescue of the Loews Kings Theatre in Brooklyn and revival of the Studebaker Theatre in Chicago may be the best examples — most of the facilities highlighted are beyond the point of return and continue to deteriorate. That list of notable landmarks includes everything from the Uptown Theatre in Philadelphia to Loews Canal Theatre in New York. 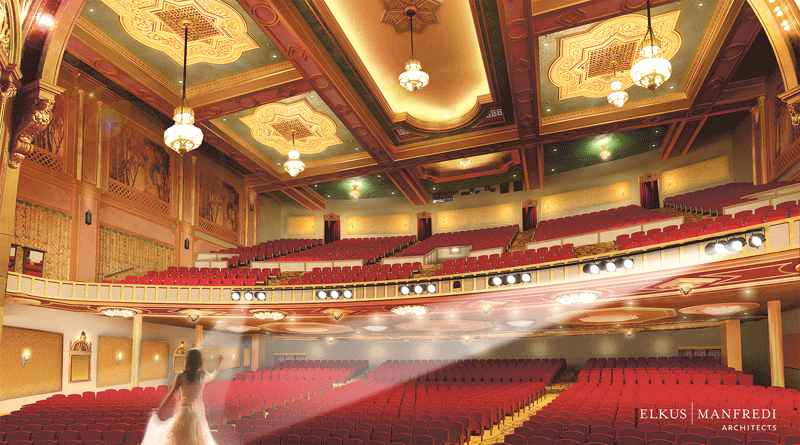 An architect’s rendering of what might be the new look of the Paramount’s interior.

Springfield’s Paramount is not featured in the book, and Flores, like most area residents who can fondly recall seeing movies and shows there decades ago, doesn’t want it to become one of the theaters now referred to solely with the past tense.

But nostalgia has never been enough of a force to get the Paramount project done — just as in the case of those theaters mentioned above, said Flores, adding that there must be a workable business plan in place to secure not only the needed financing, but a viable future for the endeavor.

In many ways, he’s been working on such a plan — while also taking on a host of other projects, such as the Memorial Square Apartments — since the Farm Workers Council acquired the Paramount in 2011 for $1.7 million.

Since then, the theater has hosted a few shows and events, including a formal announcement in early 2013 of Penn National’s proposal (ultimately not chosen by the city, which favored MGM’s plan) to build a casino in the North End of Springfield. The Paramount was going to be one of the centerpieces of that plan, said Flores, who still has an architect’s rendering of a revitalized theater from that proposal in his conference room.

It’s been joined by a few newer renderings over the past few years as Flores has slowly forwarded what he believes is a workable plan for the landmark.

I’ve worked on enough historical buildings to know the time it takes to do things the right way. In the end, you want to end up with a good product.”

It calls for an 81-room hotel (with options to expand that number to 120) to provide a reliable revenue stream for the theater, which will be renovated and become host to different types of shows and programs.

Over the first 85-odd years of its existence, the Paramount — later called the Julia Sanderson Theater and then the Hippodrome — has played host to everything from rock concerts and boxing matches to ballet performances, and Flores projects the same kind of flexibility in the future.

Extensive renovation work is needed, said Flores and Jose Perez, development consultant for the project, as they provided a tour of the Paramount to BusinessWest. They stopped early and often to point to various areas where water has been coming in through the leaky roof.

Overall, though, the landmark has good bones and a solid infrastructure, they noted, adding that, physically, it can be restored to its original luster.

As for its prospects for once again being a successful business operation — and it’s been decades since it could claim such status — those we talked with said that goal is attainable, especially given the improving climate in the city.

Ultimately, Flores expects the restoration of the Paramount and the entire Massasoit Block, as it’s called, to be a catalyst for further development in what he called “Mr. Rogers’ neighborhood,” a reference to the other properties and storefronts along Main Street.

“There will be a focus on entertainment — if you have a hotel, you need bars and restaurants,” he said, making one of several references to “building blocks” and how a project of this type usually develops in stages.

“I’ve worked on enough historical buildings to know the time it takes to do things the right way,” he said. “In the end, you want to end up with a good product.”

When asked about a timeline for the project, Flores said the doors to the Paramount might be open in the spring of 2019. He then paused and offered that it might even be ready at about the same time MGM Springfield is set to open in September 2018.

He acknowledged that this was ambitious, but then said, “it’s better to dream big than not to dream at all.”

Those same sentiments could be applied to every aspect of this ambitious project.

As he wrapped up his tour of the Paramount, Flores pointed to one of the famous Tiffany chandeliers in the main lobby.

“I’ve been offered $150,000 for that,” he said matter-of-factly, repeating sentiments given to numerous press outlets over the years, adding quickly that he has never seriously entertained such offers.

Instead, he remains focused on the bigger picture, a complete restoration of the Paramount, not selling off its various pieces.

Both the dreamer and the realist in him believe the project is not only doable, but necessary as Springfield continues to add new chapters to its revival story.

Flores remains dedicated to making the Paramount the next chapter in that book, and not the one about majestic theaters still waiting, against all odds, for a chance to raise the curtain again.

As the Job Market Tightens, Employers Face a New Set of Challenges