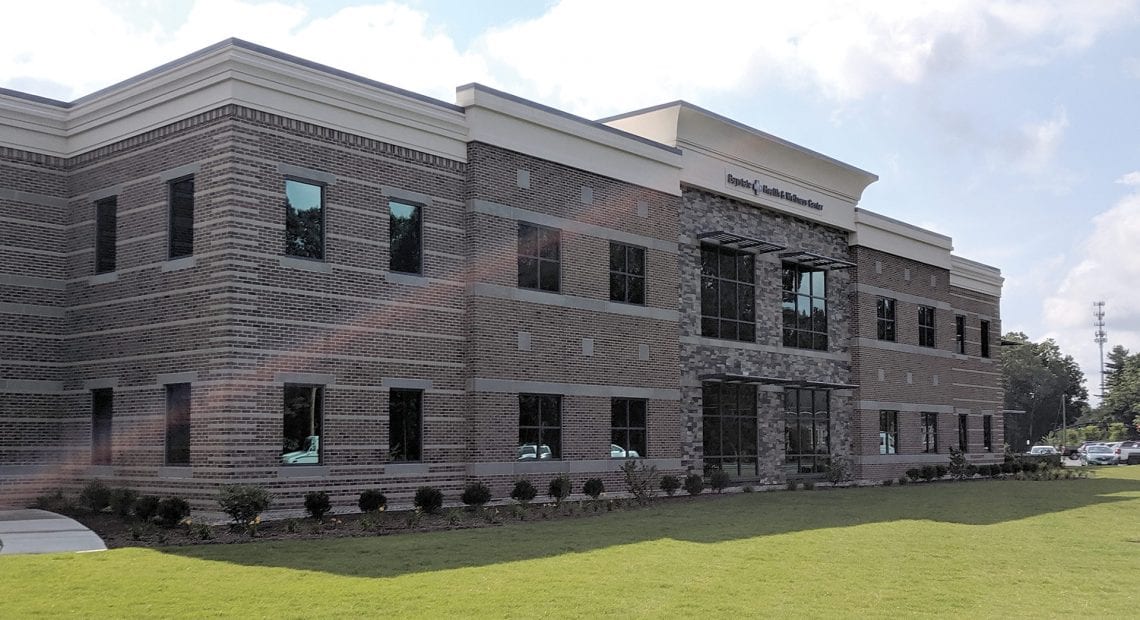 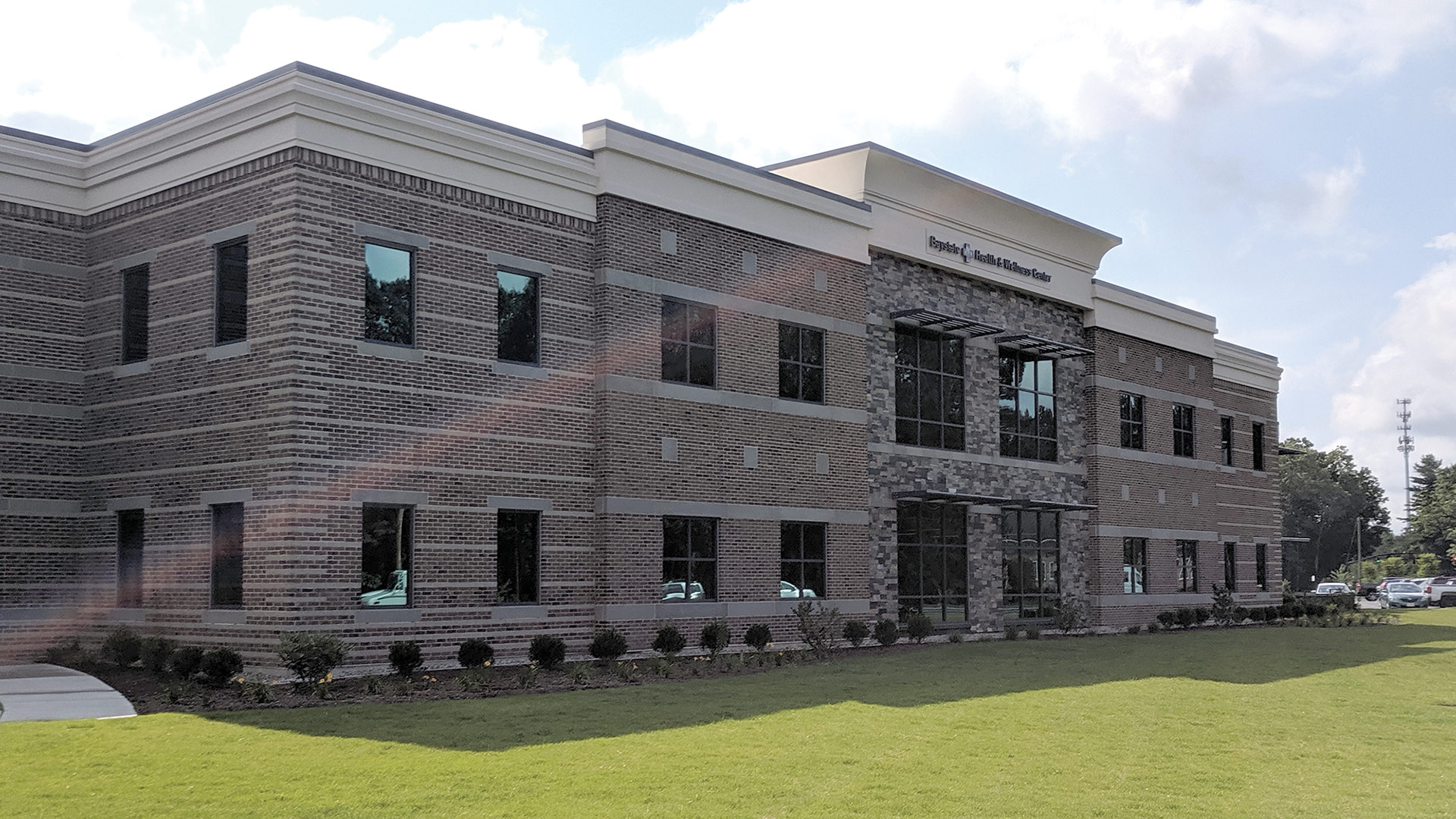 The Baystate Health & Wellness Center, which opened last year, lies alongside significant improvements to the Dwight Road corridor at the East Longmeadow line.

When people think of economic development, they might think of a flood of new businesses into a community. Longmeadow will never have that, Town Manager Stephen Crane said, but it certainly has economic development — centered instead around residential property values and the quality of life that maintains them.

“What sustains property values are investments like middle schools, senior centers, things that make the community more desirable to live. That’s the number-one goal of Longmeadow,” he said of a town in which 95% of all property is residential.

“As I always say, our number-one economic activity is the sale of single-family homes,” he went on. “So keeping those homes a desirable place for people to live is job one, and new senior centers, new schools, new amenities — those are the things we can do as a municipal government to sustain that quality of life.”

While a new middle school has been talked about for years, a new senior center will soon become reality, after a groundbreaking ceremony was held on July 11. The Longmeadow Adult Center will move from its current location, a former elementary school at Greenwood Park, to a $14 million facility on Maple Road next year.

“It’s a fantastic project. It’s a very big deal,” Crane said, noting that the demographic trend commonly called ‘the aging of America’ is certainly underway in Western Mass.; in fact, 29% percent of Longmeadow’s population is age 60 or older, and that number grows every year. Because of that, he said, communities need to provide services that help seniors age in place.

“The senior center will fill a lot of gaps we have in terms of aging in place,” he told BusinessWest, noting amenities like its state-of-the-art gymnasium with a suspended walking track. “The programming space will be substantially better than what we have now. The current programs are great, but the new space will reflect the quality of those programs.”

Crane, who has been Longmeadow town manager for the past six years, will be departing his seat next month after inking a three-year contract as town manager in Concord. He’s witnessed plenty of changes in town during that time, but one of the intriguing ones has been Longmeadow’s shifting demographic reputation, spurred by growing amenities for seniors and a significant stock of ranch homes for single-floor living. In short, a town once known as a place where young parents raised their kids and moved out is becoming an all-ages destination.

To maintain those amenities — and the quality of life so critical to keeping residential property values high — town officials support legislation on the state level that would allow it, and other towns, to override a key element of Proposition 2½, which went into effect in 1982.

That legislation sets a 2.5% ceiling on total property taxes — or $25 per $1,000 of assessed value — and a 2.5% annual limit on property-tax increases. (The ceiling does not include excludable debt for capital projects like the senior center.) Proponents of a change, at least in Longmeadow, would like towns to be able to override the first part of the law by moving the ceiling higher, first by a two-thirds vote at town meeting, then at the ballot box.

“It’s really quintessential self-determination, which is the essence of town-meeting government.”

“We are approaching that ceiling. And costs are going to continue to go up, unless property values stay the same or go up. If we have a 1% dip in our real-estate market, our tax rate jumps up even if we don’t spend another dime,” Crane said. “We are not proposing to touch the 2.5% increase, but we propose that the community can set the ceiling where it wants, and decide for themselves how much they want to invest in themselves. It’s really a local-control thing.”

While Longmeadow has the highest residential tax rate in the Commonwealth, it also has a high bond rating. “So our tax rate is not the result of profligate spending. We are an extremely well-managed town from a financial standpoint. We have to be very careful and make great decisions and pursue value in earnest, which we do.”

One way it does that is by pursuing regionalization when possible, as with the two-town (and perhaps others in the future) regional emergency communications center, or RCC, that Longmeadow is establishing with Chicopee, housed in that city’s Police Department and operated by an independent district called WESTCOMM. That system is expected to go live in October, and dispatchers have already been hired.

“The Baker administration is pushing municipalities to work together,” Crane said. “We certainly embrace that, whether it’s working with East Longmeadow on shared health services for public health, the regional dispatch with Chicopee, we are always reaching across town lines, trying to find ways to work more efficiently and relieve burdens on taxpayers.”

“Would it lead to increased taxes? Not any more than the current two-and-a-half-percent cap allows year after year. Would it lead to higher tax bills in the future? Potentially. But is it essential to maintain property values and maintain the community’s quality of life? Yes.

“To hit that ceiling,” he continued, “means reductions in services that may not be impactful right away, but would lead to a downhill momentum where services are reduced, quality of life goes down, property values then go down as well — and that’s even if the economy and real-estate market stay stable.”

Important, though, is the fact that, under the proposed change, each community would have a say in moving its tax ceiling — and Crane said Longmeadow residents have long been aware of its unique tax base and the need for community investment to keep property values high.

“It’s really quintessential self-determination, which is the essence of town-meeting government,” he added. “The state doesn’t really give a lot of local-control options to communities for generating revenue.”

Meanwhile, the town continues to pursue improvements and development on both the public and private fronts. Along the busy Dwight Road corridor that intersects Converse and Williams streets — where the Baystate Health & Wellness Center opened last year — a major infrastructure project included street and sewer upgrades, new sidewalks and bike lanes, and improved traffic-light coordination across the East Longmeadow town line.

“The corridor improvements on Dwight Road are complete, which is a regionally significant improvement,” Crane said. “Traffic is flowing exponentially better than it ever did. Those improvements were clearly needed.”

On the private-investment front, in addition to the Baystate project and a 21,000-square-foot expansion of the Longmeadow Shops in 2017, a memory-care facility is planned on the site of a former synagogue on Williams Street, and the former Brewer-Young Mansion on Longmeadow Street has been converted to professional offices, with developers eying a mix of uses, including shared workspaces. On the municipal side, the development of a new Department of Public Works facility on the site of a former tennis club on Dwight Road continues despite unexpected costs from asbestos removal from the soil.

Overall, Crane said, “town meeting been generous with appropriations. To me, it’s a sign that they have faith in their local government and know that, if it wasn’t really needed, we wouldn’t be asking for it. The success we’ve had with approval of things shows we are able to articulate the community’s needs in a way that town meeting agrees with.”

“The fields have fallen into disrepair for a variety of reasons — lack of irrigation, overprogramming, and just some disinvestment,” he told BusinessWest. “The DPW does the best it can to maintain those fields, but without irrigation and with the overprogramming, there’s a limit to how effective you can be with maintenance.”

The plan includes a new, central parking lot, converting current parking at one end of the complex to field space, and achieving a net gain in field space.

“The fields will be stripped, graded, planted, and irrigated,” he went on. “It’ll be a couple years out of service, but when it comes back online, it’ll be the envy of the region, I think. That’s not a great economic driver, but when we have tournaments, those do generate revenue for the town, but it also sustains quality of life, which does have economic value.”

Crane said the various departments in Town Hall want to support its local bricks-and-mortar businesses with good infrastructure and cooperative permitting. “You can help people with what they need or you can make them climb through the regulatory systems on their own, and I know we really try to do what we can for our local businesses.”

But he also understands that housing — and the higher revenues that come from raising quality of life and keeping home values high — will always dictate much of what Longmeadow is able to achieve.

“I’m proud of the work I’ve had a small part in accomplishing,” he said as he prepared for his newest challenge in Concord. “We have a great team, great departments, and outstanding volunteers. I’m proud to have been a part of many positive changes that have happened in the community — things that have been quality-of-life improvements, but have not changed the character of the community. The next town manager will have challenges, but I think the town is in a good place.” 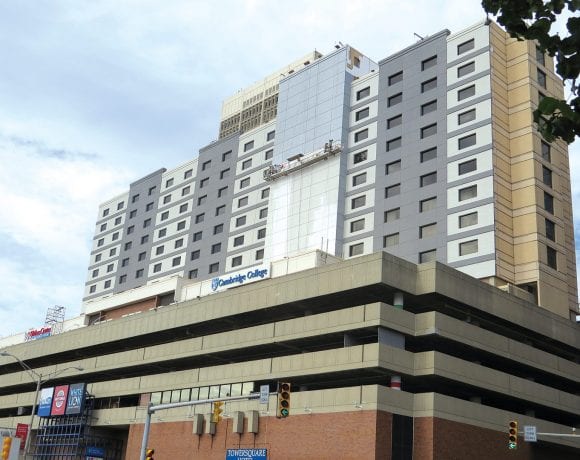 Springfield Positions Itself to Bounce Back from COVID-19