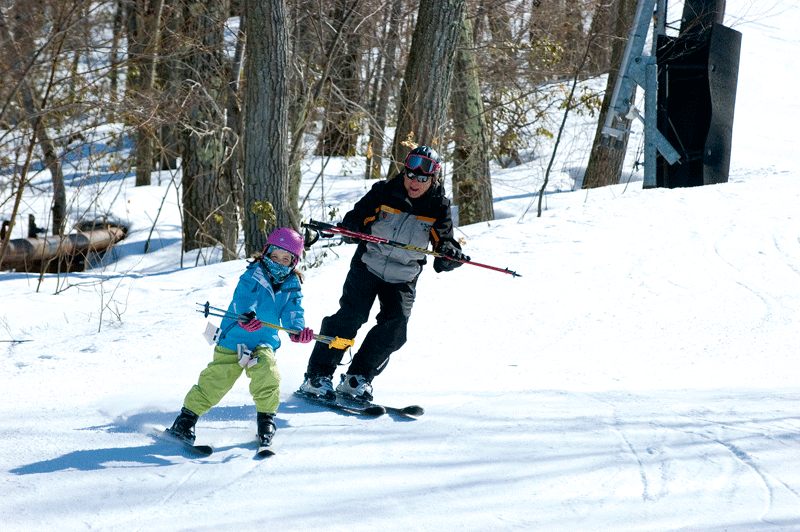 A Ski Butternut instructor — one of many who teach lessons for a wide range of ability levels — helps a youngster improve on the slopes.

When operating in a competitive industry with far fewer customers than it boasted a few decades ago, expanding one’s operations carries some risk.

But Ski Butternut believes the niche it has carved out in Great Barrington — a moderately sized mountain that focuses on a family environment and boasts a robust learn-to-ski program — will translate well about 25 miles to the east, which is why it purchased the Blandford Ski Area earlier this fall and rechristened it Ski Blandford.

“It has a long history and a rich tradition; it’s been there since 1936,” said Dillon Mahon, Ski Butternut’s marketing director. “It’s also close to a large population in Springfield, and we’re hoping to attract quite a few people from that area.”

The Blandford resort, which has been owned by the Springfield Ski Club for the past 81 years, has struggled with declines in memberships and visits, and decided in July to sell the property to Ski Butternut owner Jeff Murdoch for $269,000.

“We purchased what was basically a private ski club,” Mahon said. “They didn’t advertise it, and a lot of people didn’t know it was there. We’re reopening it this year and making a lot of improvements, from renovating the lodges to upgrading snow-making equipment and grooming equipment.”

Also important, he added, is spreading the word that Ski Blandford will represent what Butternut does: a place that welcomes families and beginners and helps them navigate the world of skiing and snowboarding — and convinces them to keep coming back. Ski Blandford’s website has been redesigned in the style of the Ski Butternut site — only with less expensive pricing to persuade mountain enthusiasts to give the facility a try.

“It’s a great family atmosphere on a good-sized mountain close to home,” Mahon said, again touching on the emphasis that has kept Ski Butternut successful.

“That’s been a big part of why we’re successful,” he went on. “Butternut focuses on a family atmosphere and on learning, bringing people into the sport. It’s kind of a startup mountain that gives people great service. The ski school here is large and can accommodate large amounts of children and adults. Learn-to-ski weekends made Butternut successful, and it’s something we plan to mirror at Blandford as well.”

It’s a critical element, he said, to bringing in new blood at a time when the popularity of skiing has been experiencing a slow decline. In a one-year period from early 2008 to early 2009, 11.24 million Americans took to the slopes, according to industry sources. Eight years later — from the spring of 2016 to early 2017 — the number was 9.78 million. And snowboarding has seen an even more precipitous fall.

That’s when people think about skiing. I can send people e-mails and Facebook posts all day, but when a fresh bunch of snow is on their doorstep, that changes people’s mindset toward skiing.”

One reason is that what’s known as the conversion rate, or the percentage of first-timers who embrace the slopes and return for more, currently stands at around 15% nationally. Mahon said Ski Butternut has made a conscious effort to boost it.

“There are a lot of barriers to entry,” he told BusinessWest. “We as a resort are trying to knock down those barriers, to make it a more accessible sport, make it easier for people to get into the sport.”

For instance, the resort has long offered a one-day beginner’s package that includes access to the milder hills, a group lesson, and equipment rentals, all for $75. After that, an all-mountain pass with a group lesson and rentals costs between $75 and $100, depending on age.

“We’ve had a lot of success bundling those offerings for beginners, giving them a smaller piece to bite off that might be more digestable than a season-long rental and saying ‘good luck,’ Mahon said.

“For us as an industry, and especially at Butternut and soon at Blandford, that’s part of our overall strategy to attract more skiers as opposed to putting up more barriers,” he went on. “Basically, we want to hold their hand as they learn to ski and make it a better experience for them. When people try skiing for the first time, it’s hard. How do you choose equipment? How do you ride a lift? We’re doing our best to break down those barriers and make it affordable for beginners.”

After that, well, the challenge is getting visitors to come back. Several years ago, Ski Butternut undertook an extensive upgrade of its snow-making system to guarantee ski-worthy conditions no matter what kind of winter New England experiences.

“We’re open with or without Mother Nature’s cooperation. That’s the way things go,” Mahon said. “We have great snow-making equipment, and we’ll be updating with the equivalent at Blandford as well — more guns, higher capacity. We’re open hell or high water.”

That said, “it also helps quite a bit to get a bunch of snow,” he conceded. “That’s when people think about skiing. I can send people e-mails and Facebook posts all day, but when a fresh bunch of snow is on their doorstep, that changes people’s mindset toward skiing.”

The typical season brings well over 100 inches of snow, but some are drier. Even in those years, typically the weather will remain cold enough to consistently manufacture snow. Temperatures below 26 degrees are ideal for making snow, because the water that emerges from the nozzles in tiny droplets are almost instantly supercooled to create the best-quality snow.

Ski Butternut has also done well with its non-skiing activities, such as its popular tubing park, complete with a mechanized lift to keep riders energized for their two-hour sessions.

“Tubing is a different market in some ways,” Mahon said. “Everyone likes tubing, while not everyone skis. So it’s great for families with little kids — something to do for a quick day out.”

Meanwhile, the event calendar features plenty of activities, from race events to wine and beer tastings; from Saturday concerts on the lodge deck to a ‘ski and paint’ day on Jan. 28, which is exactly what it sounds like. In the summer, the mountain stays open to hikers and outdoor enthusiasts, and the resort is also the site of the annual Berkshires Arts Festival.

“Some of these events aren’t necessarily skiing-based events,” he noted. “We want to draw on the local community and give people a good experience so they keep showing up.”

He and the ownership team at Butternut hope for the same at Ski Blandford, which is why Murdoch is investing in painting the lodges, upgrading snow guns and grooming equipment, and, in general, letting people know the resort is on the way back.

“We’re making a lot of improvements over the next couple of years,” Mahon said. “It’s going to get better and better.”