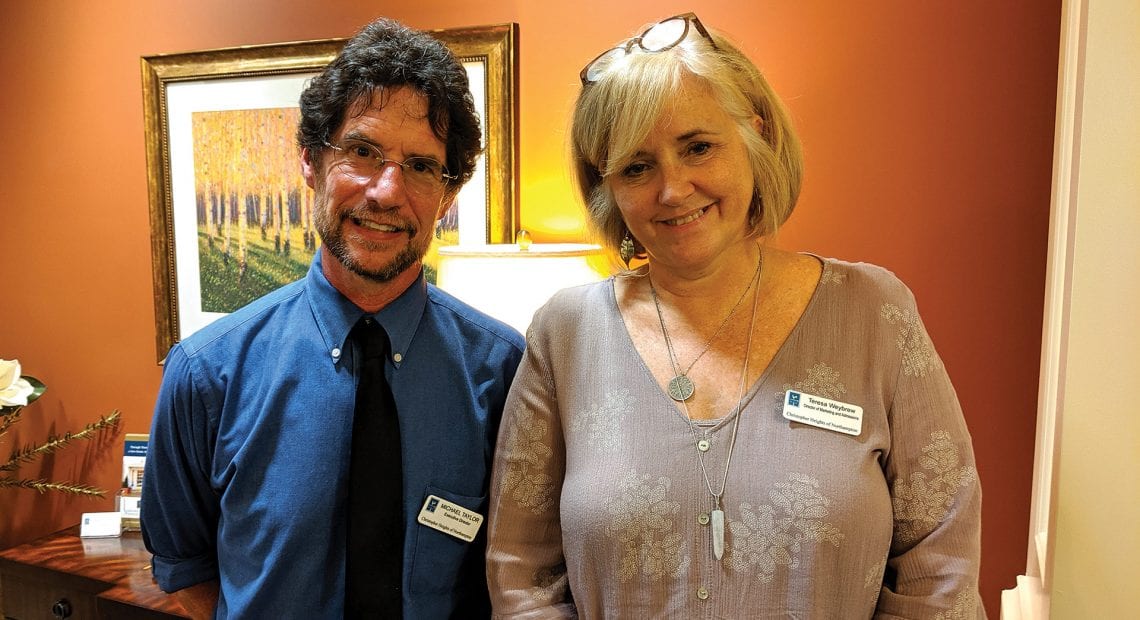 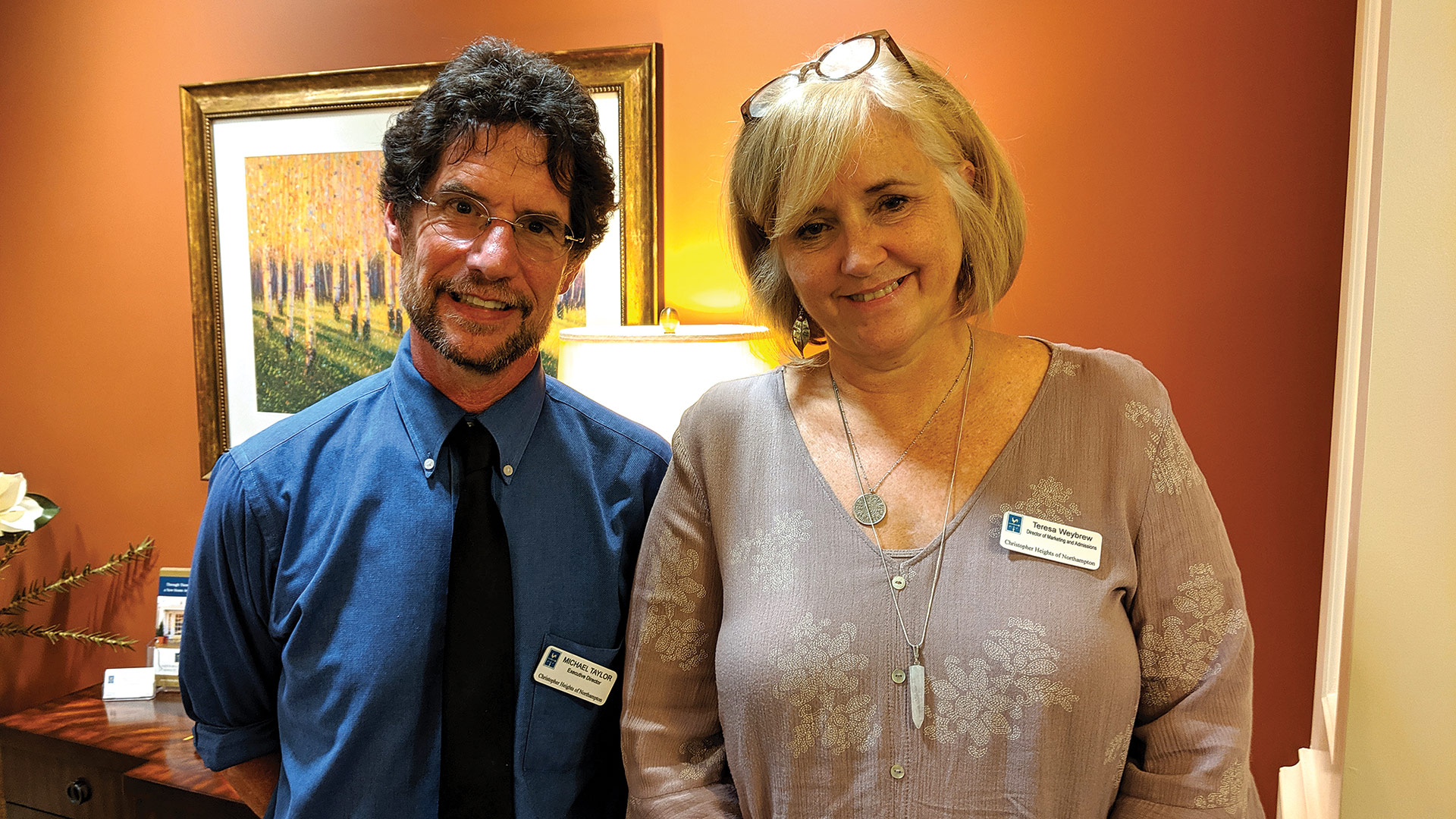 Michael Taylor and Teresa Weybrew say Christopher Heights of Northampton is striving to be ‘the place’ for LGBTQ seniors.

The average age of a Christopher Heights resident is somewhere in the 80s, says Teresa Weybrew, director of Marketing & Admissions at the assisted-living community in Northampton.

That’s an age group that grew up in a less-open time when it came to gender identity and sexual orientation — and members of that generation often still feel anxiety around their peers. But what’s more surprising, Weybrew said, is that, for many, that fear of being openly themselves is heightened when they move into senior-living communities.

“There’s a statistic that, of people who have come out and lived an authentic life in their sexual orientation, when they come into assisted living or skilled nursing, 86% go back in the closet out of fear,” she told BusinessWest. “They’re in an environment where they don’t know how safe they are because they have some memory loss or physical ailments — they’re already vulnerable because they’re not quite physically themselves — and then they have this added layer of anxiety. We want to help them understand that we get it, and they’re going to be OK here.”

Christopher Heights recently hosted a workshop for staff, residents, and public on LGBTQ (lesbian, gay, bisexual, transgender, queer) cultural competency in the senior-living setting. Presented by Rainbow Elders, an arm of LifePath in Greenfield, the event was also part of the process of being credentialed by SAGE, the nation’s largest advocacy organization for LGBTQ elders.

“I want our community to be accepting of other residents,” said Michael Taylor, the facility’s executive director, “but we also want employees to feel comfortable and respected. I see this as making it a welcoming place for both.”

Not all communities are. Angela Houghton of AARP Research writes that three out of four adults age 45 and older who are lesbian, gay, bisexual, or transgender say they are concerned about having enough support from family and friends as they age. Many are also worried about how they will be treated in long-term-care facilities and want specific LGBTQ services for older adults.

“I’ve been working with SAGE in a conversation for a couple months,” Weybrew added. “But as I got into it, I realized this isn’t just about having a plaque on the wall. We want to live and breathe and walk the talk and really be the facility that does the work and where people can come in and say, ‘yeah, they really do know what they’re doing, and I feel welcome,’ whether it be an employee or someone who comes to live here.”

For the recent workshop, Rainbow Elders brought in four people — representing gay, lesbian, bisexual, and transgender perspectives — to talk about gender, identity, orientation, and how none of those categories are black and white, but rather a spectrum.

“It was good educational background. Each talked about their personal story,” Taylor said, noting that Christopher Heights already employs a handful of LGBTQ individuals and aims to create a more welcoming environment for staff and residents alike — which is why hearing these perspectives shared aloud is important.

The demographics speak to the importance of this issue. By 2030, the population of American adults ages 65 or older is expected to surpass 70 million, according the U.S. Census Bureau. The National Gay and Lesbian Task Force puts the number of LGBTQ seniors in the U.S. at 3 million and notes that this figure is expected to double by 2030.

However, LGBTQ seniors frequently report concern over the possibility of encountering discrimination from senior-housing staff or other residents. According to SAGE, 48% of lesbian, gay, or bisexual couples experience “adverse treatment when seeking senior housing,” and transgender elders face such treatment at even higher rates.

Meanwhile, a 2016 report from Justice in Aging notes that 78% of LGBTQ residents in nursing homes, assisted-living facilities, and long-term-care facilities responded ‘no’ or ‘not sure’ when asked if they felt comfortable being open about their sexual orientation or gender identity to facility staff.

Then there are cases like Mary Walsh and Bev Nance, a Missouri couple whose housing application at a local senior-living facility was denied because of a cohabitation policy that defined marriage as between one man and one woman. They sued the facility, but their lawsuit was dismissed by a U.S. district judge in January.

Yes, that’s January 2019, not 1959. Clearly, the work of SAGE and like-minded organizations isn’t done. Cases like this certainly help explain why only 20% of LGBTQ seniors in long-term-care facilities are open about their sexual orientation, according to Justice in Aging.

Yet, attitudes have been shifting — and prejudices hopefully diminishing — over the decades when it comes to this population, and facilities should be welcoming them as an untapped market, notes a report by Sodexo titled “Why ‘LGBTQ-welcoming’ Will Soon Be a Hallmark of the Most Successful Senior-living Communities.”

“Developing a marketing strategy that attracts LGBTQ older adults is the right thing to do,” the report notes. “And it’s good business. Given the opportunity for senior-living operators to advance their growth agenda, developing a strategic plan that attracts and retains LGBTQ older adults and allies is a vital lever to business growth and to improve quality of life.”

To help facilities move in that direction, SAGE launched its credentialing program for retirement communities around the country aiming to create more understanding and resources for these marginalized groups. Its program addresses the specific difficulties LGBTQ older adults face, including abuse, neglect and hurtful comments.

“Most people work with older adults because they have a caring orientation,” said Tim Johnston, director of national projects at SAGE. “We are giving them the tools they need to help older adults feel more comfortable.”

In developing a culturally competent and welcoming environment, it is important to address a number of factors, including language, inclusive visuals in company materials, programming, and outreach efforts, according to the Sodexo report.

At Christopher Heights of Northampton, it begins with the application, which used to give only two options for gender — male or female. It may seem like a small thing, but it’s a detail that sets transgender and non-binary individuals on edge right from the start.

“If you’re trans, what do you put?” Weybrew said. “That’s your first exposure to us — and you’re already thinking, ‘all right, they expect me to be a man or a woman,’ when you don’t identify as that.”

She recently asked a resident from the LGBTQ community what might have improved her experience, and she did mention the application form, but she also stressed the importance of respectful communication.

“She said, ‘just ask.’ And we are afraid. We don’t want to offend anyone, and yet, in our fear, we are offending people by not asking them the questions. We want to connect, we need to connect, and that’s what I think this training will offer us — ways to have the conversation. Many people have lived their whole lives feeling either offended or accepted or some awkward in-between. It’s not like we’re going to do something that’s going to shock them.”

Sodexo’s report affirms that idea, noting that “one of the simplest ways to cultivate both understanding and respectful relationships with LGBTQ older adults is through appropriate use of language. Keep in mind, however, that some terms still used by older LGBTQ people may be seen as outdated by younger LGBTQ people. Become familiar with key terminology and pay close attention to how residents use terms and how they refer to themselves and others.”

Indeed, the report continues, “the LGBTQ community is not a monolith. This must be kept in mind when addressing the needs of LGBTQ older adults as well, who have a totally different set of life experiences than younger LGBTQ people. The former grew up in a time that was far less welcoming, when LGBTQ people guarded their sexual orientation and gender identity as a dangerous secret that could cause them to lose their homes, jobs, families, and freedom. They risked being labeled anything from criminal to mentally ill. That generation still carries a lot of this baggage today as they attempt to navigate issues related to housing and healthcare.”

That may be an understatement. SAGE notes that, just a few decades ago, homosexuality was still classifed as a mental illness by the American Psychiatric Assoc., not to mention a crime in some parts of the U.S. Housing, employment, and healthcare discrimination were common. As a result, many LGBTQ seniors remain fearful or distrustful of medical and social-service providers.

Weybrew has assembled an advisory board that will continue to meet regularly going forward and bring in educational opportunities for residents, staff, and the larger community.

She knows she’s already dealing with a vulnerable population. “You’re talking about a potential resident who’s scared because they’re leaving their home of 40 years. Their spouse died, they’re losing their health, and they’re coming to a place where they don’t know us. I know what’s like because I did it with both my parents. Now you add that layer of sexual orientation. We want them to know, ‘yeah, it’s cool to be here because we’re going to treat you right.’

“We’re going to have our issues,” she went on. “We might get some pushback from an 88-year-old who says, ‘God says that’s a sin.’ It’s going to happen. And we’re going to learn how to manage that.”

Senior-living facilities aren’t the only ones recognizing opportunities to boost cultural competency among their staffs. For example, Cooley Dickinson Hospital has been recognized as a 2019 Leader in LGBTQ Healthcare Equality by the Human Rights Commission (HRC), the country’s largest LGBTQ civil-rights organization. CDH is the only hospital in Western Mass. and one of only seven hospitals in the Commonwealth to earn this designation.

Among its efforts, Cooley Dickinson has recruited and trained clinicians who specialize in the care of LGBTQ people; implemented changes to electronic medical records that facilitate the use of the patient’s preferred gender, name, and pronouns; and collaborated with local gender-diverse community members, the Fenway Institute, and researchers from Harvard Medical School on the PATH (Plan and Act for Transgender Health) Project, a study that will inform the expansion of gender-affirming health services in Western Mass.

“This designation affirms Cooley Dickinson’s commitment to providing equitable, inclusive, and affirming care for LGBTQQ patients and their families,” said Cooley Dickinson Health Care President and CEO Joanne Marqusee. “We are proud to receive — for the third consecutive year — this honor and to continue our efforts to ensure that our local LGBTQ community has access to respectful, appropriate care.”

Sure, it’s easier for Northampton-based facilities like Cooley Dickinson and Christopher Heights to make these efforts, which are likely to meet with resistance in less progressive areas of the country. But it’s a start.

“We realize it’s going to be an ongoing process, but we as a company are committed to it,” Taylor said.

Weybrew said Christopher Heights is a corporate sponsor of the Out! for Reel film festival, which focuses on LGBTQ-themed films and recently kicked off its season. “I had a chance to get up and speak. The word is getting out that this is going to be a welcoming place, and it starts with us internally asking, how do we make it that place every day? How do we make people feel comfortable?”

The answer is an evolving one — and begins with asking the right questions of those who have felt marginalized for too long. 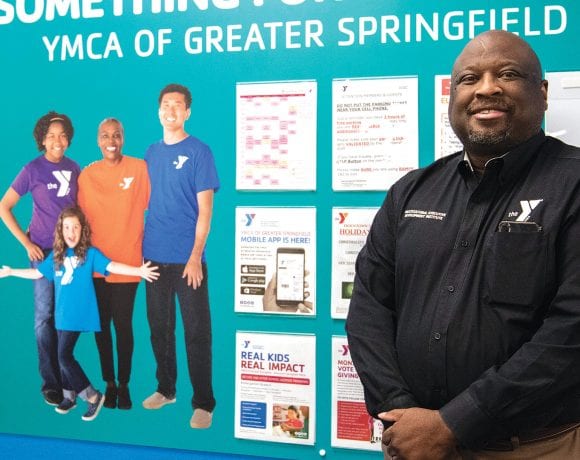 The Relocated YMCA Serves the Community in Many Ways