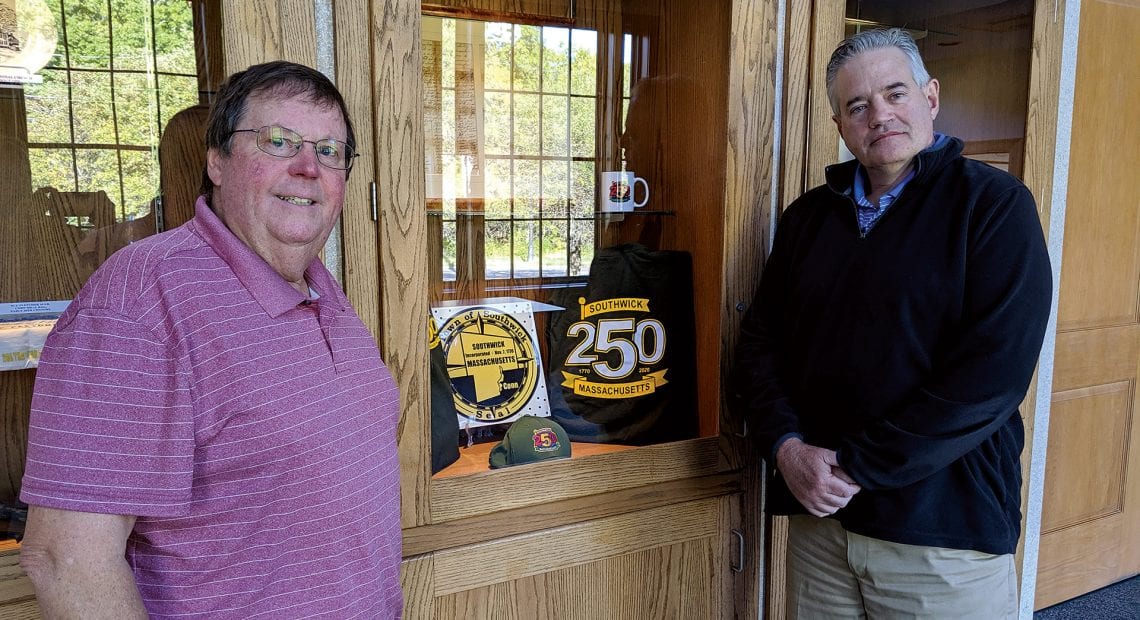 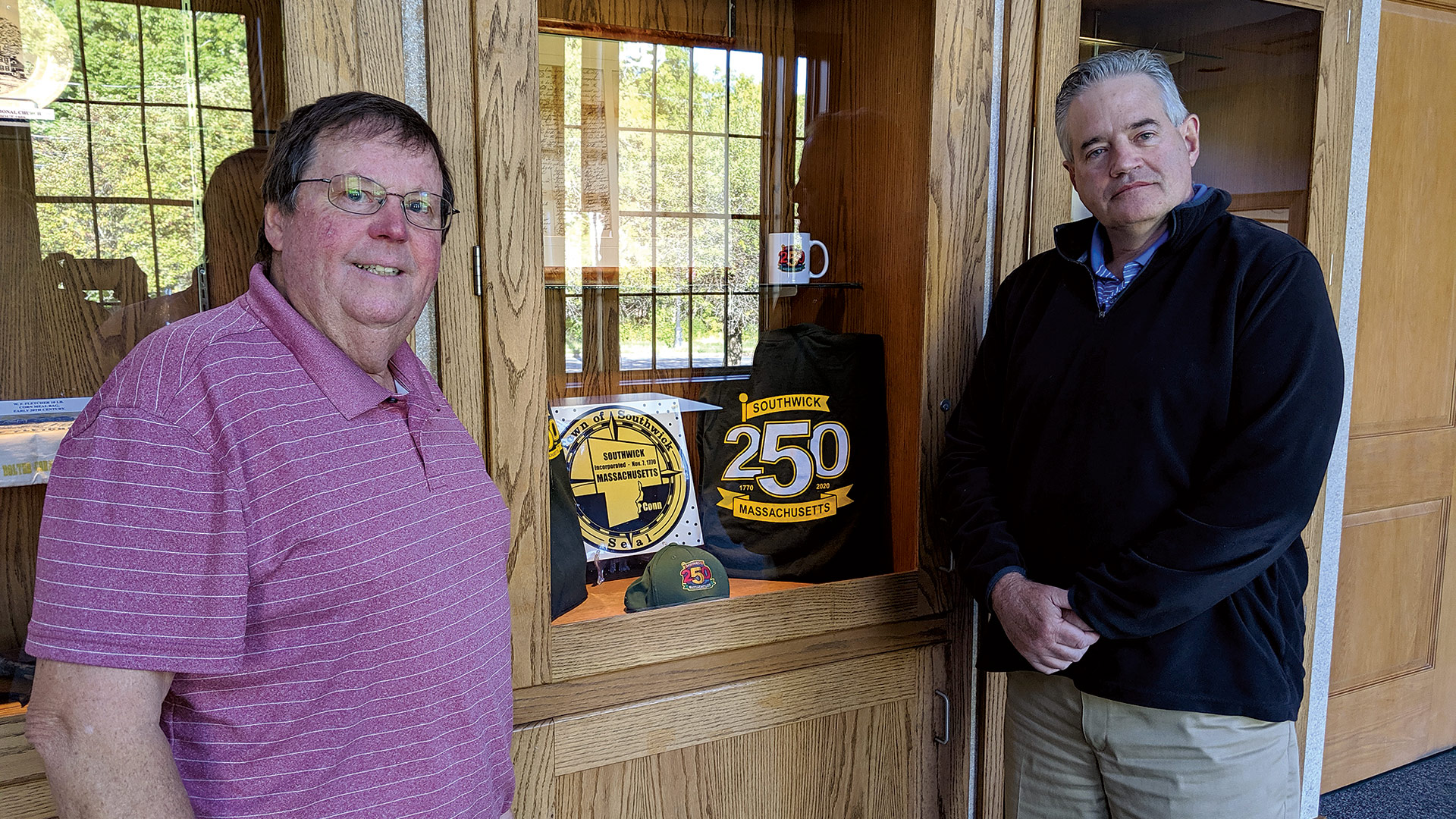 Russell Fox (left, with Karl Stinehart) says Southwick’s slate of 250th-birthday events will be family-friendly and honor the town’s past while looking to a promising future.

Nov. 7 will be a big day in Southwick — and the start of a big year.

Starting that day, a year-long series of events — including holiday festivals, history tours, parades, concerts, and more — will culminate in the Taste of Southwick Gala on Nov. 7, 2020, the 250th anniversary of the town’s incorporation.

Southwick officials and volunteers have been meeting to plan this broad slate of birthday events for some time, much of the planning guided by the nonprofit Southwick Civic Fund.

“It’s an ambitious plan for a smaller community,” said Russell Fox, who chairs the town’s Select Board. “We’re actively raising money, not just from businesses but residents also. And we have some very generous residents — one resident gave us $1,000. So it’s coming along. We’d like these events to be kid-oriented. We want young people to feel like they’re part of the community and learn something about the history of the community and have a good time.”

And there’s a lot to celebrate, as Southwick continues to grow its business base, housing options, and especially its reputation as a recreation destination, Fox said. That Taste event alone speaks to what he calls a recent “restaurant renaissance” in town, with recent additions like Crepes Tea House and Wok on Water, the conversion of Chuck’s Steak House to Westfield River Brewing (which hosts concerts during the summer), and new Crabby Joe’s Bar and Grill owner Mark O’Neill’s plans to tear down that establishment and rebrand it as a state-of-the-art restaurant and brewery that may use wind turbines for electricity.

A 250th-anniversary celebration is an opportunity for a town like Southwick to show how far it has come in the realms of history, population growth, economic development, and cultural and recreational draws, said Karl Stinehart, the town’s chief administrative officer.

On the latter front, Southwick has become a mecca for recreational offerings, like boating on the Congamond Lakes, motocross events at the Wick 338, town events at the 66-acre Whalley Park, and a well-traveled rail trail frequented by bicyclists, hikers, and dog walkers.

As for its population, Southwick still boasts around 10,000 residents, and work continues at two significant new neighborhoods, a 26-home subdivision off Vining Hill Road called Noble Steed, and Fiore Realty’s project to develop about 65 homes at the former Southwick Country Club site. Meanwhile, the town made zoning changes near that site to expand commercial developments along College Highway, including a possible medical facility.

On the infrastructure front, the town is planning to improve sidewalks on Depot Street to provide easier access to downtown, and is currently improving the roadway and drainage on Congamond Road — a key entry into town from Connecticut — aided by more than $4 million in state funds.

“When that’s done, it’ll have a bike lane and sidewalk, and connect the neighborhood both to Gillette’s Corner and to the rail trail,” Stinehart said. “There are businesses that abut the rail trail, and if you go there on certain days, on the weekend, you’ll see people on the trail using those businesses.”

Stinehart noted that the town’s single tax rate of $17.48 continues to be a draw for new businesses, which is good considering the potential development opportunities along College Highway and at the Southwick Industrial Park on Hudson Drive.

“We try to balance residential growth and the business sector, which is an important thing because it keeps our tax rate competitive,” he said. “When you’re a businessman looking to site in a community and you see you’re going to be treated equally as every other taxpayer, you take notice of that.”

Fox agreed. “We try to keep that balance. We’ve got a graying population, with more people on fixed incomes. So the tax rate is a big deal to us. We don’t want to tax people out of the community they grew up in or want to retire in.”

He recalled a business owner looking to move into town from a neighboring community a couple decades ago. He was offered some tax incentives but was angling for more, but instead Fox reminded him of the town’s quality schools, low traffic, reasonable tax rate, and recreational opportunities, and that sold him. “He’s been in Southwick 20-plus years, doing very well.”

Those selling points have only expanded since then, Fox said, and that’s reason enough to celebrate 250 years.

Fun in the Sun

There’s plenty for outdoor enthusiasts to enjoy in Southwick, including three golf courses (Edgewood, the Ranch, and a par-3 track at Longhi’s) and the aforementioned 6.5-mile-long rail trail that runs through town from the Westfield border to the Suffield border.

“People in town love the bike trail — it’s just a beautiful area,” Fox told BusinessWest. “When that first started, there were some naysayers, but I think most of those people have gone away.”

“Or they’re on the trail using it,” Stinehart quickly added.

Meanwhile, the lakes on the south side of town — featuring two boat ramps, a fishing pier, and a town beach — provide plenty of activity for residents. A $275,000 project renovated the south boat ramp on Berkshire Avenue last year, making it more modern and handicap-accessible, and the beachfront was recently renovated as well.

As for Whalley Park itself — which was donated to the town by the prominent Whalley family and developed using municipal and Community Preservation Act funds — it includes a full-size soccer field, baseball field, and softball field, lighting for the fields, a huge kids’ play area, and a pavilion.

The town also recently acquired a 144-acre parcel on North Pond at Congamond Lakes. The Mass. Department of Fisheries and Wildlife awarded Southwick money to help purchase it, and the Franklin Land Trust conducted a fund-raising effort to make up the difference in price. The parcel is abutted by two areas owned by the Commonwealth of Massachusetts and the state of Connecticut. 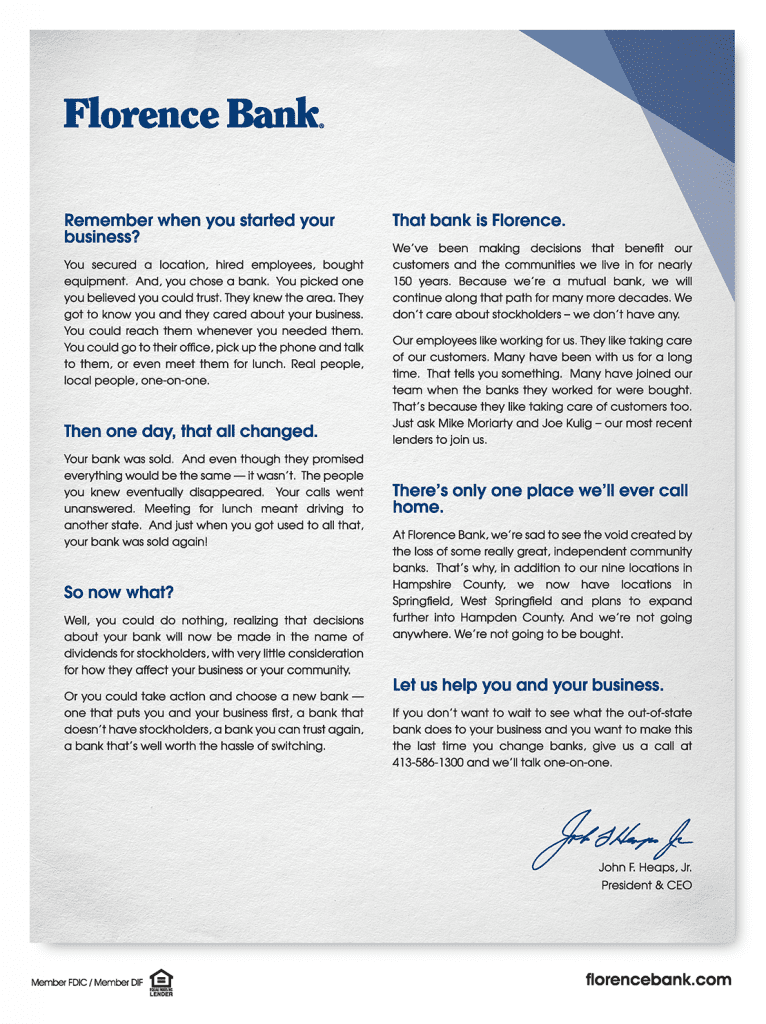 Even before that, Stinehart said, Southwick had preserved more than 1,000 acres of open space, not including the lakes themselves, and has been active in buying up development rights to farmland, ensuring that they can’t be developed, but must remain agricultural land.

“We’re proud of our agricultural roots, and we still have a lot of farms,” Fox said. “Now we have farms protected in perpetuity.”

Also in the realm of preservation, the town’s Cemetery Commission continues its work to restore the Old Cemetery, which dates to 1770, and the town recently sold its old library, built in 1891, to an investor who intends to partner with the Southwick Historical Commission to preserve it while putting it back on the tax rolls.

The town’s modern schools — the complex on Feeding Hills Road that houses Woodland Elementary School, Powder Mill Middle School, and Southwick Regional School underwent significant additions and renovations in recent years — have also been a draw for new residents, and they have the capacity to house a growing student population, Fox said.

All this has contributed to Southwick being honored this year by the Republican’s Reader Raves program as the best area town to live in.

“It’s taken a lot of hard work to get to that point,” Fox said of the award. “Some people don’t like change at all, but not all change is bad. This is a community we can be proud of. I think we doing a good job of keeping things in balance — commercial, industry, and residential.

“We’re not sitting back; we’re growing,” he went on. “We know people want to move here, and we’re proud of that. We’re going to make sure Southwick remains the town it always has been.” u 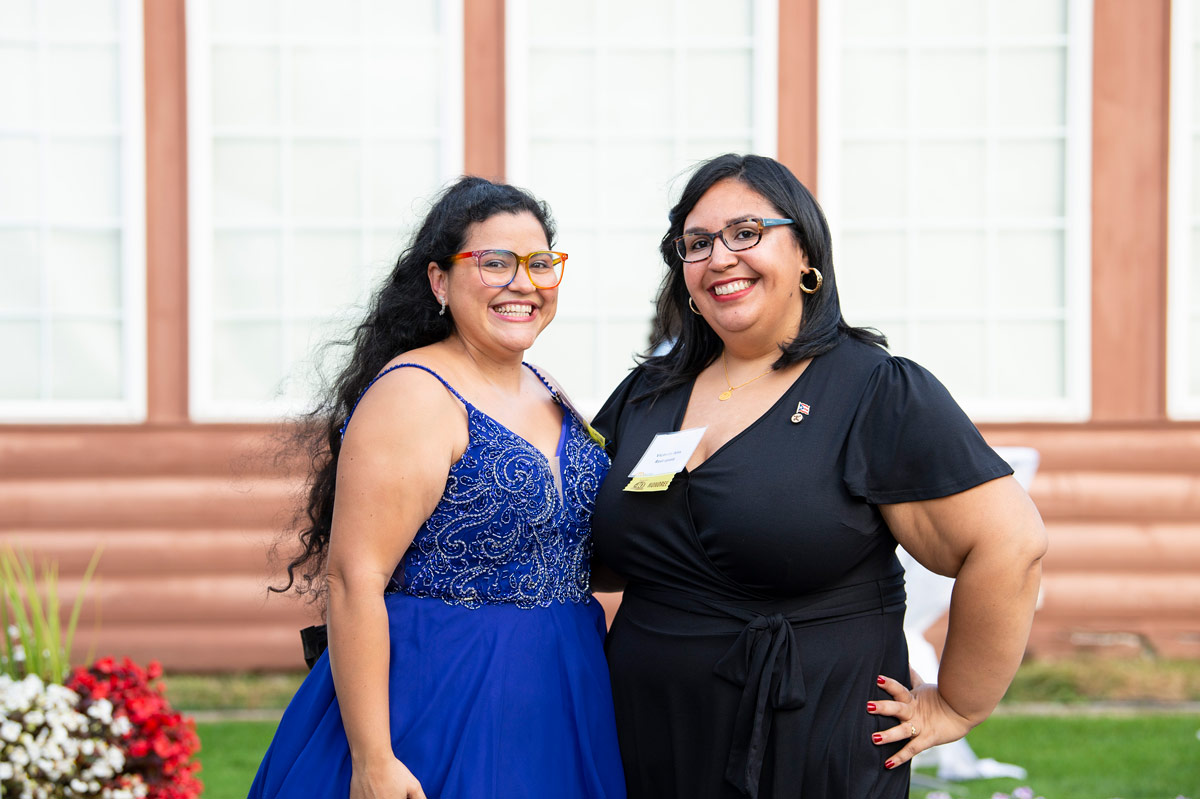