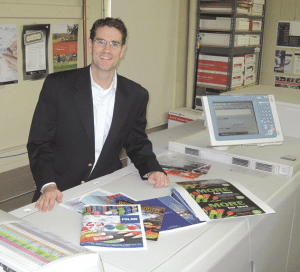 While many industries are still feeling the aftereffects of the Great Recession, commercial printers are telling a different story.
“It’s been very strong,” said Greg Desrosiers, vice president of sales at Hadley Printing in Holyoke. “When the economy first started to tank, printers, as a whole, were among the first to feel it. We really felt it back in early 2009. We, along with many other printers, felt people were holding back on expenses they normally would not have held back on, because there was a lot of uncertainty.”
However, he told BusinessWest, “I can say all that is truly behind us. People are moving forward, and the past two years have been very, very strong from a production standpoint.”

TigerPress, which recently celebrated its 28th year in business and moved two years ago from Northampton to a larger facility in Easthampton, reports a similar surge in volume.
“We moved because we had expanded, and we had two different production facilities,” CEO Jennifer Shafii said. “We finally found a building where we could house both. It was very important to be under one roof.
“Our clients are kind of across the board,” she added. “Large clients, small clients — we take care of everyone. We do everything from offset-print magazines to business cards, to package printing on boxes and folded cartons. We have a very wide range of printing capabilities here. And it has been a good year. We’ve been growing steadily since our move to East Longmeadow.”
Stephen Lang, president of Curry Printing in West Springfield, has also enjoyed a strong year. He said his company has made a concerted effort to stay away from ‘commodity’ jobs — like business cards and postcards — that people can have produced just as easily on the Internet. 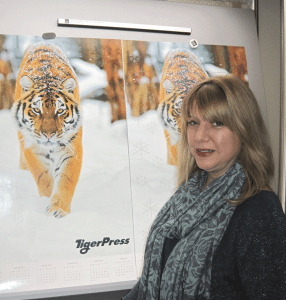 Jennifer Shafii says TigerPress has been a regional leader in environmentally friendly printing.

“We’re concentrating on specialized projects and tight-deadline projects, not commodity-type printing that’s more cheaply done if you’ve got the time to go online and do it. A lot of our work is time-sensitive and requires more human contact than just plugging things in online; that’s what’s keeping us busy.”
Curry has also thrived through diversity, as evidenced by its growing niche in large-format printing.
“The sign business is coming into its own. We’re doing more large-format digital stuff, more sign work, and more trade-show graphics,” said Lang. “A lot of times, someone going to a trade show not only needs cards but signage as well. We’ve become the one-stop shop, able to provide everything they need.”
Reflecting his store’s growth, Lang recently moved Curry from its longtime storefront on Elm Street to a larger facility on nearby Union Street, complete with 1,000 square feet of extra space and indoor bays to install vehicle graphics.
“We’ve always done vehicle graphics, but waiting for a nice day in New England is not always the best way to schedule an install,” he said with a laugh. 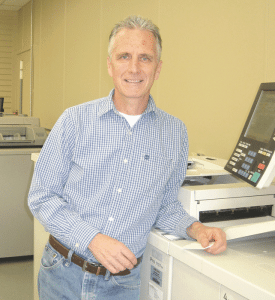 Steve Lang says one key to success today is diversity of services, such as Curry’s niche in large-format printing.

The Internet has changed a print shop’s needs when it comes to visibility, he added. “When we first started, it was important to be on a main road and be easily found. But it has become less important with workflow the way it is now. A lot of people, instead of walking through the door, just upload their files.”

Lean and Green
Hadley Printing has changed with the times in some ways, too, said Desrosiers.
“We’re now closing in on our second year offering a digital print service — digital, short-run, high-end printing. If someone wants to do 1,000 postcards, instead of having to go on the printing press, we offer that digitally, and it’s a very economical avenue,” he explained. “It’s been a huge bonus for us and really opened a segment of business we struggled with for a long time — how do you fire up the printing press for 1,000 postcards?”
He noted that many clients would much rather order small runs of a product four times a year then order in bulk once a year, which clashed with Hadley’s focus on larger-run projects.
“It’s tough, because in printing, the commodities of scale are always there,” he said. “If you know you’re going to use 5,000 brochures in a year, it’s so much cheaper to just order 5,000 of them. But people fear something might change in the brochure — they might edit employee information, for example — so they feel more comfortable ordering in smaller batches. That’s where digital has its strengths. We’ve been marketing it just as we do offset printing, with all the same proofing and delivery to your door as with offset.”
While offset printing still represents 80% of Hadley’s business, Desrosiers said, he’s pleased that the company is now able to take on smaller jobs that don’t utilize offset technology. “One of the things printers struggle with is, how can you make it financially worth your while to produce 100 of this and 100 of that? But we’re doing it, and it’s opened up some really nice opportunities for us, some new avenues that were never there before.
“With the influx of digital printing,” he continued, “if someone only wants 25 of something, we can do it. Four years ago, I wouldn’t have been able to do that; we only did jobs of 500 and up. I don’t have to say that anymore, which is nice.”
TigerPress, meanwhile, has increasingly come to the forefront as a ‘green’ printer, Shafii told BusinessWest. Her husband, Reza, the company’s president, recently updated his book on the subject, Go Green on Your Next Print, and they both “take pride in being eco-friendly and being environmentally conscious,” Jennifer said.
The changes TigerPress has implemented over the years range from chemical-free plates to vegetable-based inks.
“We were one of the first printers to be eco-friendly,” she said. “We were the leader of the pack for green printing. I think it’s important, both for both me personally — I have kids, and we should all be responsible for the environment in every industry — and our customers appreciate it too.”
Shafii said offset printing has been more amenable to eco-friendly practices than, say, digital printing. “A lot of people feel that digital printing is green, but it’s not that green. With offset printing, we use vegetable ink as our house stock. We use chemistry-free plating systems, so we’re not putting chemicals into the environment. With digital, you’re very limited in paper stock, and you have to buy the toner, which is not green.”
Shafii said customer response to the company’s green image has been heartening, “but a lot of our success is due to the quality of our products and the quality of our service. We get a lot of repeat business because people are happy with the service they get at TigerPress.”

In Demand
To keep customers happy, Lang said, today’s printers are expected to adhere to much more rigid time demands. Part of the change has to do with companies that set deadlines for marketing campaigns or other types of projects, and when different stages of the project fall behind the timeline, the printer is expected to make up the difference. He understands that business reality, and has marketed Curry as a shop that will take on time-crunched — even same-day — jobs.
“What happens is that, in the planning stage, maybe printing is the last thing that has to be done,” he said, citing the example of, say, a playbill that has to be produced before a show opens. “We’re used to the tight deadlines, the drop-dead deadlines. We’re down at the end of a lot of planning, and we usually have to pick up the slack and make sure it gets done.”
And there’s no shortage of work out there to get done, Desrosiers told BusinessWest.
“There’s this whole buzz out there — is printing dead? is printing going away? — because of the whole digital world,” he noted. “If anything, it’s starting to show its value as a whole other channel. It has its strengths, its worth, and its place.
“As an example of that,” he said, “you can send out these e-mail blasts, but e-mail is becoming such a congested channel. If you look at it as a highway, it’s a congested highway. Yes, you can send it out, and there are economies to it, but people are not opening it and reading it because they’re getting so much in their box. With printing, you can send something to someone they can hold and touch and read when they want. It has value. And the more and more congested that digital arena becomes, the more valuable print will become.”
And not just the print products people can produce at home or in their offices, he added.
“When people are doing something in print, they really do want it done well, because it’s representing their corporation,” Desrosiers said. “When you print something off a personal desktop printer, if it doesn’t have that crispness and sharpness and classiness you get from a commercial printer, and that can really do your business more harm than good.”
He compared that scenario to a non-mechanic who tries to fix his own car, insisting that, just as skilled mechanics will always be in demand, so will high-quality commercial-printing services.
Shafii agrees. “Because of the recession, a lot of printers went out of business, sadly for them,” she said, noting that there was a proliferation of shops over the past two decades — probably too many for the regional market to sustain. “But we’re still going strong, and we have a lot of repeat customers, because they like what we do.”

Northampton’s Union Station Is Transformed into a Banquet Facility