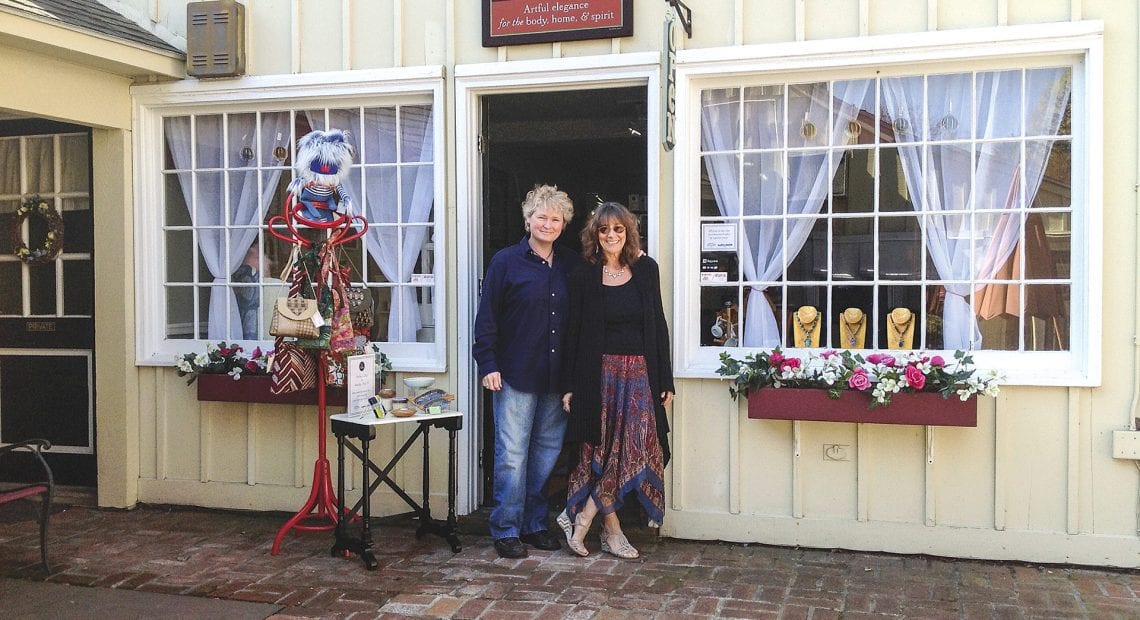 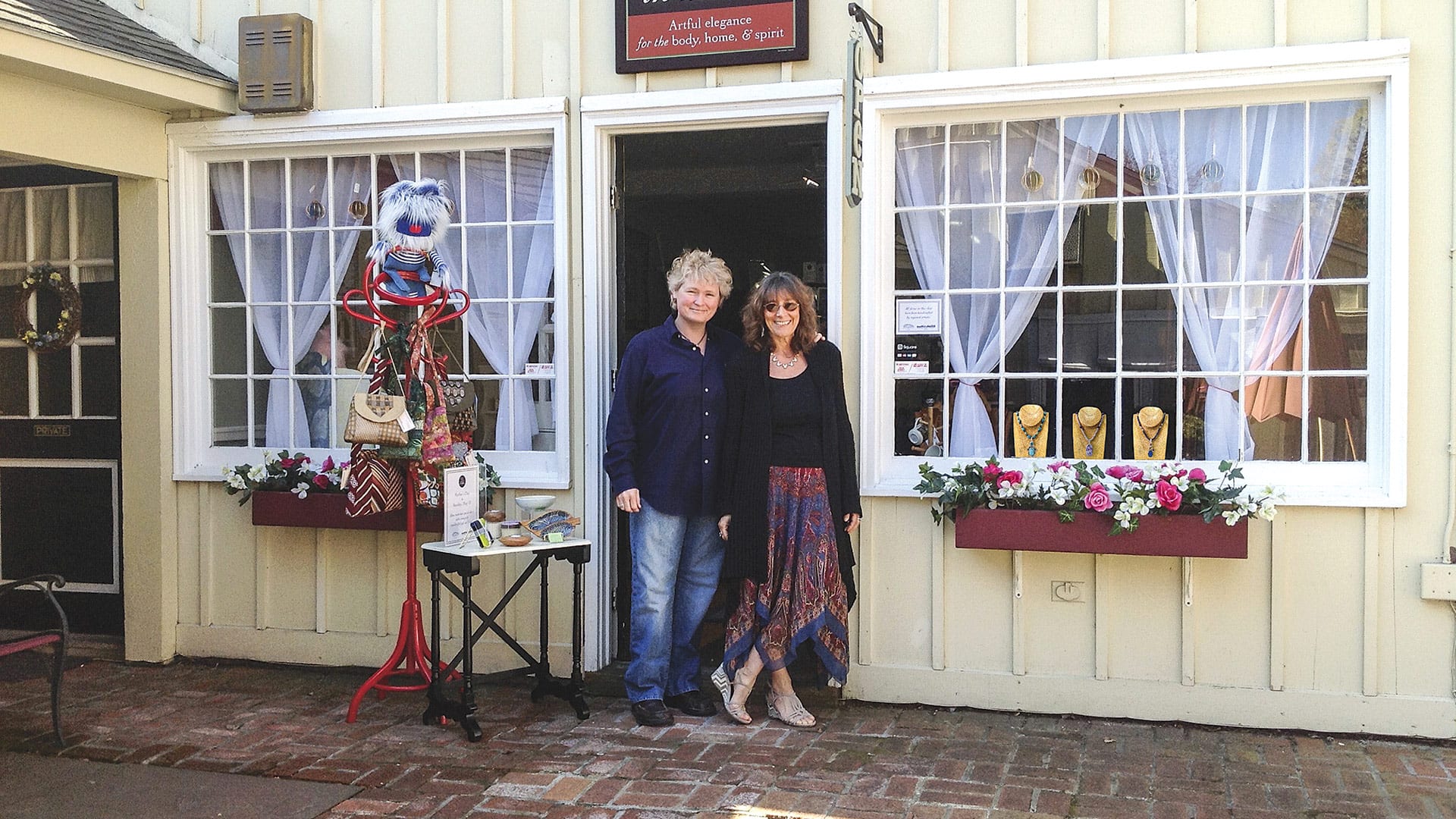 Margaret Kerswill (left) and Laureen Vizza in front of their Main Street shop, Mutability in Motion.

Margaret Kerswill has a couple of good views of Stockbridge’s business community. One is as president of the Stockbridge Chamber of Commerce. The other is from her storefront window on Main Street.

“I think there’s a real appeal that’s well-defined in our town’s tagline, which is ‘a quintessential New England town.’ It feels small; it feels intimate,” said Kerswill, co-owner with her wife, Laureen Vizza, of Mutability in Motion, a downtown store that sells crafts handmade by artisans from across the U.S., many of them local.

“There’s a connection between people in town,” she went on. ‘When you walk through town in the morning, just about everyone says ‘good morning’ to you. There’s a very nice atmosphere about Stockbridge.”

Still, outsiders often peg the community as a tourist destination — which is certainly is — and not much else, and are surprised to find a bustling local economy that doesn’t shut down during slow tourism seasons.

“I know being in my shop, a lot of the visitors who come, who have never been here, are often surprised to see businesses stay open year-round,” Kerswill said. “When they visit other tourist areas at the beginning and end of the season, a lot of those restaurants and shops close down. We’re a small town, so most of our foot traffic is in the summer season, but we’re still here year-round, serving local regulars.”

Still, Stockbridge relies heavily on tourism and visitorship for economic development. With a population of just under 2,000 — ranking it in the bottom sixth in the Commonwealth — the community doesn’t have a deep well of residents or businesses from which to draw tax revenue, but it does boast a widely noted series of destination attractions, from Tanglewood to the Norman Rockwell Museum; from the Berkshire Theatre Festival to Berkshire Botanical Garden.

Other attractions continue to emerge as well, including the oft-delayed Elm Court project by Travaasa Berkshire County, which will turn the historic Elm Court Estate into a resort featuring 112 hotel rooms, a 60-seat restaurant, and a 15,000-square-foot spa.

The property, which sits on the border of Stockbridge and Lenox on Old Stockbridge Road, was constructed in 1886 as a summer cottage for William Douglas Stone and Emily Vanderbilt, completed a series of renovations in 1919, and evolved into an inn in the ’40s and ’50s, hosting dinners, events, and overnight accommodations. It was eventually placed on the National Register of Historic Places.

The project to renovate it began six years ago when Front Yard purchased the estate from the Berle family, who had run a boutique, wedding-oriented hotel there from 2002 to 2009. Eight neighbors appealed the 2015 approval of the resort by the Lenox Zoning Board of Appeals, but the Massachusetts Land Court eventually ruled in favor of the developer, Front Yard LLC. This past summer, Front Yard asked the Stockbridge Select Board for — and received — an extension of the permit which would have expired last month. Construction is expected to begin in the spring.

Meanwhile, the Boston Symphony Orchestra is developing a $33 million construction project at Tanglewood, a four-building complex that will house rehearsal and performance space for the Tanglewood Music Center as well as a new education venture known as the Tanglewood Learning Institute — the first weatherized, all-season structure at Tanglewood, which the BSO plans to make available for events beyond the summer months.

“We really are an amazing cultural center here, between the visual arts and handcrafted arts and crafts,” Kerswill said. “We’ve got music, dance, and theater with amazing summer-stock casts. On one hand, we have the feel of country living, but we have the convenience of Manhattan two hours away, Albany 45 minutes away, Boston two hours away, and all the culture in our immediate area. It’s remarkable. That’s why I’m here — the culture and the arts.”

As chamber president, Kerswill leads a member base that’s smaller than most chambers, but “strong and loyal,” as she called it.

“We do some chamber-related functions to connect,” she said, “and we also have tri-town chamber mixers with people from Lenox and Lee, where we get together and share experiences in an informal setting over cocktails for a couple hours.” 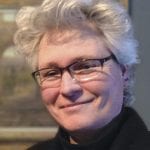 “We really are an amazing cultural center here, between the visual arts and handcrafted arts and crafts. We’ve got music, dance, and theater with amazing summer-stock casts.”

The chamber also presents an annual event to honor members and businesses, alternating between an individual one year and a company the next. On top of that, it puts on two major events. One is the three-day Main Street at Christmas festival — slated this year for Nov. 30 through Dec. 2 — which brings thousands of people into town with activities for families and children, concerts, caroling at the Red Lion Inn, and self-guided house tours. On Sunday, Main Street closes down for several hours, antique cars are brought in, and the strip transforms into a scene straight out of a Norman Rockwell painting.

That follows a summer arts and crafts fair each August, a weekend-long event that always sells out its vendor capacity, she said. “There’s no entry fee for patrons, and people freely walk around and come and go as they please. That brings a lot of people to town, at a time when summer is winding down and there’s less traffic.”

Not wanting to rest on its laurels when it comes to its status as a desirable town for tourists and residents alike, a visionary project committee was formed by Stockbridge officials several years ago to develop recommendations that could be implemented over the next 20 years. The committee issued a report in 2016 titled “Planning a Way Forward.”

That report noted that residents value the town’s cultural institutions and historic buildings; its open space, recreation sites, and walking trails; and its downtown (although many would like to see additional shops and services, as well as more parking). Meanwhile, they want to see smart housing growth that takes into account the community’s aging population, as well as additional transportation options and better accommodation of walkers and bicyclists.

As a result, the document envisioned a Stockbridge in 2036 that mixes the traditional strengths of tourism, culture, and creative economy with green- and technology-based businesses, food production from local farmers, and agri-tourism. The ideal community would also be less auto-reliant, expanding pedestrian networks, bicycle infrastructure, and regional bus and ride-sharing services.

The report also predicts a socially and economically diverse population that provides equally diverse housing options, from apartments and condominiums to smaller single-family homes, co-housing projects, and historic ‘Berkshire cottages.’ These include a mix of sustainable new construction and repurposed buildings, including the preservation of older homes, along with an increase of people living close to the town center, including mixed-use buildings with apartments over shops to support downtown businesses.

While the overall vision may be ambitious, it encompasses the sorts of goals a town of Stockbridge’s size can reasonably set when looking to move into its next era.

Kerswill, for one, is happy she and Vizza set up shop in Stockbridge — right next to the Red Lion Inn, in fact, which is in many ways the heart of the downtown business culture.

“It’s a great experience being in downtown in Stockbridge,” she told BusinessWest. “We don’t have any chain stores or restaurant franchises. We are all independently owned, and the chances are good, when you pop into one of our stores, that you’re going to be meeting the owner. It becomes a very personal experience because of that.”

As for the Red Lion itself, “it’s cozy and intimate,” she went on, “and they’ve modernized with things that people expect, like wi-fi, but you still get a real, old-fashioned experience, and I think people really crave that. I know I do.”

Westfield Development Being Whipped into Shape