Stinky Cakes Founder Mychal Connolly Has a Passion for Entrepreneurship 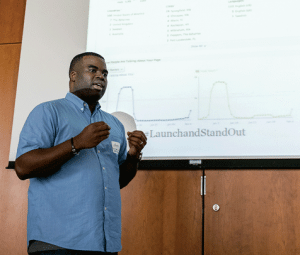 Mychal Connolly has turned his entrepreneurial success with Stinky Cakes into a vibrant speaking and writing career.

Several years ago, with his second son on the way, Mychal Connolly and his wife already had many of the items normally given at showers.

“We just wanted diapers — my son already had a crib and a playpen,” he recalled. “I said, ‘could we please have diapers?’”

As it turns out, no. Not as a gift, anyway. “Even though diapers were a practical gift, people want to give a fun gift; it’s not a one-sided experience.”

He found the solution to that dilemma in Stinky Cakes, the product he launched in 2009 with the express purpose of making diaper giving fun.

“My wife and I both love marketing, and we thought about how we could get baby-shower folks buying diapers,” he told BusinessWest. “We started thinking about what we could do to make diapers match the baby-shower theme, and one common item all baby showers have is a cake. So we thought, ‘OK if we made diapers look like a cake, it could be part of the theme.’”

The couple spent a few months trying to make the idea — essentially a bunch of diapers arranged in the shape of a cake and wrapped with decorative ribbon — work. When they had produced a prototype, they showed it to Connolly’s mother-in-law, who promptly bought one as a gift. When she returned from the party with several more orders in hand, Connolly knew he was onto something.

When they officially launched a business under the striking name Stinky Cakes — “people either love the name or hate the name,” he said, but they certainly remember it — the couple had two young boys and no reserve funds to tap, so they moved forward by making hard budget choices. “Instead of buying fancy clothes, we bought a website. Instead of going out to movies and restaurants, we bought business cards that sent people to the website. Eventually we saw revenue coming in from the website.”

Not knowing anything about media buying — and, again, with little initial money to work with — Connolly went to WMAS and worked out a deal for radio spots, and that helped, too. “We just worked our butts off. Most people who start business ventures quit after they don’t see any results, but the problem is not the product. It’s not the area. It’s not the consumers. It’s the entrepreneur.” 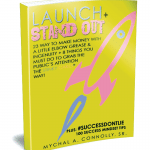 To say Connolly is passionate about entrepreneurship is an understatement. Beyond his business selling Stinky Cakes, he has written two books on entrepreneurship and regularly speaks to audiences on the topic — both in person and through a pervasive social-media presence, including a blog centered on starting and running a business.

He’s not convinced anyone can be an entrepreneur, but “if it’s in you, it can be nurtured. Entrepreneurs see the world differently. They don’t see a problem, just something that hasn’t been solved yet. They solve the problem, and then plug people in to keep that system going.

Growing up in the Bahamas, Connolly probably didn’t call himself an entrepreneur, but he certainly had the mindset.

“My stepfather had a little pest-control business,” he explained, and as a child, he’d tag along on jobs. “I’m very analytical, and I paid attention, and I saw that, in wealthy people’s homes, their coffee tables always had business publications.”

He started watching finance shows on television even though the concepts weren’t exactly pitched to kids. “I’d watch the shows with the ticker, and I didn’t understand what people were saying, but I knew I wanted to. That’s how I started falling in love with entrepreneurship.”

Then, at age 9, he started a candy company “by mistake.”

He recalled that his grandmother would go to Florida and return with “loads and loads” of candy that was unavailable on his island, and he shared it with his friends. But he eventually grew tired of people hounding him for treats, so he started saying they were for sale, not free, just to get them off his back. “Instead of leaving me alone, they said, ‘how much?’”

He knew about concepts like price markup from those business magazines, so he started earning money selling the candy and chilly treats he’d make by freezing Kool-Aid. “My grandmother had no idea this stuff was going on,” Connolly recalled — but soon after she found out, the two teamed up in the business, and she eventually left her own job to sell candy — and did so until her death in 2005.

He had caught the sales bug, and already recognized that his mind was suited to identifying needs and meeting them. “If you told me 25 years ago when all this was happening that I’d be in Western Mass. doing this, I’d say you’re crazy,” he said. “But I always knew I would be an entrepreneur; I just didn’t know what the product would be.”

Fast-forward to 2009, the first full year in the diaper business, and early sales were strong. But the following year raised some serious issues that had nothing to do with baby gifts.

“I ended up working so hard on the company that I wasn’t sleeping, and I was eating really badly,” Connolly said, noting that his weight, which had been around 220, shot up 70 pounds, and he ended up becoming diabetic, with high blood pressure and high cholesterol to boot.

He sought help — and it’s a good thing he did. “The ICU doctor said that, if I hadn’t come in, I would have ended up in a diabetic coma. I could have died. Fortunately, I survived, and that made me grow up mentally as an entrepreneur. I always had this goal that, when I was done [building a company], I would start a foundation to help kids become entrepreneurs. But when I was staying in the ICU, I realized time is really precious, and tomorrow is guaranteed to no one.”

So for the next year and a half, he took his foot off the gas and “let Stinky Cakes run on autopilot” while he instead focused his energies on working with young people through Westover Job Corps, teaching them entrepreneurship, marketing, and leadership skills, among other things.

Many of the questions they asked him became part of his book Launch + Stand Out, in which he breaks down 23 different business ideas and discusses how he would apply the Stinky Cakes model to each of them. Throughout, he never loses focus on the importance of marketing.

But Connelly is a natural marketer, expressing his passion for entrepreneurship through various forms of media, old and new, and, by extension, keeping his identity as Mr. Stinky Cakes at the forefront.

His blog — mrstinkycakes.com, of course — is one mode of communication. Others include an active social-media presence (and a book, Going Viral Unlocked, about using social media to grow a business), his public speaking through the Empact Connect network, and his role as entrepreneurial correspondent for The Engine, a radio show on WHYN 560-AM launched by Junior Achievement.

Connolly emphasizes financial literacy on the show, noting that people often don’t realize its importance. “If you give an entrepreneur $1 billion to start a company but he’s not financially literate, be prepared to give him another billion in a year.”

And it’s still not something adequately addressed in schools, he added. “We go to school to learn to read and learn to write, but where do you go to learn how to make money? Nowhere.”

He said guiding young people toward their own self-created success stories is especially gratifying.

“That’s the reason I’m a spokesperson for Junior Achievement, being able to help a kid who wants to be an entrepreneur, when no one is able to answer his questions for him. He’s got a mindset that most people are never going to understand, and when I see the lightbulb go on — when he thinks, ‘I can do this’ — that’s the best feeling.”

He recalled another satisfying moment, this one before an adult audience at Holyoke Community College. “When I was done talking, this lady comes up to me, crying. I said, ‘why are you crying?’ She said, ‘because what you said about overcoming fear — that’s the same thing my grandfather used to tell me.’ I said, ‘that’s not me talking, and it’s not your grandfather talking. That’s the successful version of you telling you where you need to go.’

That said, “not everyone is built for the fast track. I think the best entrepreneurs see the path from point A to point B and follow it; they don’t allow any noise or distractions to deter them.”

Again, whether it’s an e-commerce venture or any other type of business, “honestly, the key to it is marketing, marketing, marketing,” Connolly told BusinessWest. “There’s a market for everything. There are grandmothers blogging and writing books on knitting and making $1 million, because they have 50,000 people buying their $20 book.”

It makes sense that he’d come back to grandmothers, since his own played such a key role in his development as an entrepreneur.

“I don’t have an MBA, none of that stuff,” he said. “But I had that 9-year-old entrepreneurship moment with my grandmother, so I knew it worked. If I didn’t have that moment, I don’t think I would have started Stinky Cakes.”

Connolly was quick to add, however, that entrepreneurship isn’t easy, even for those who grow up with that passion.

“Entrepreneurship is a lonely, dark place at times,” he said. “You speak a different language, and if you’re not around people who speak the same language, you have to have a mindset where you know where you’re going, and just keep moving forward.”

Even as his writing and speaking roles continue to grow, Stinky Cakes will continue to be a big part of Connolly’s life, although he has shifted the business model to emphasize the residual income streams developed by forging partnerships with other companies.

“That’s my baby; that’s why I call myself Mr. Stinky Cakes,” he said. “But I’m a serial entrepreneur; I love being involved with fun startups and companies that are growing. To me, that’s like breathing.” 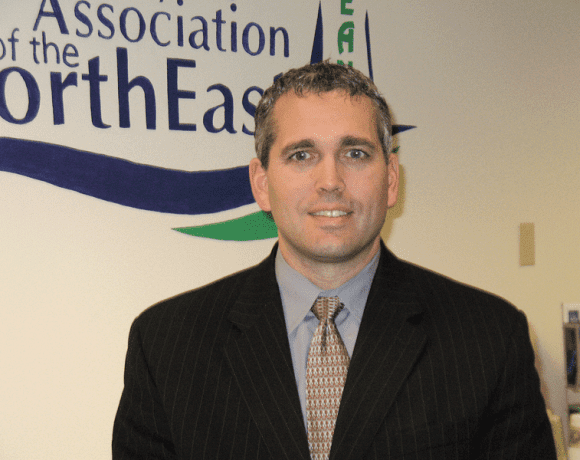