Creation of Truck Dealership Group Brings a Number of Benefits 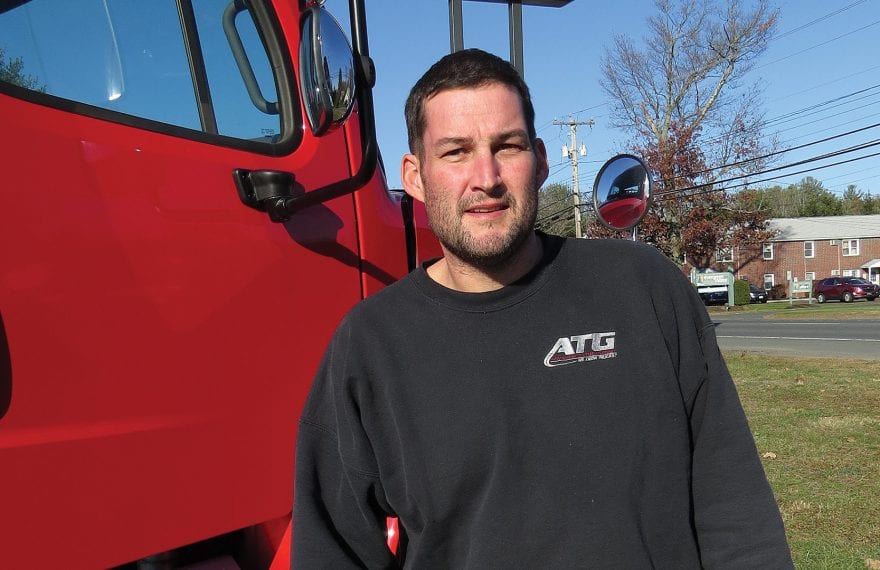 Moving into the Fast Lane 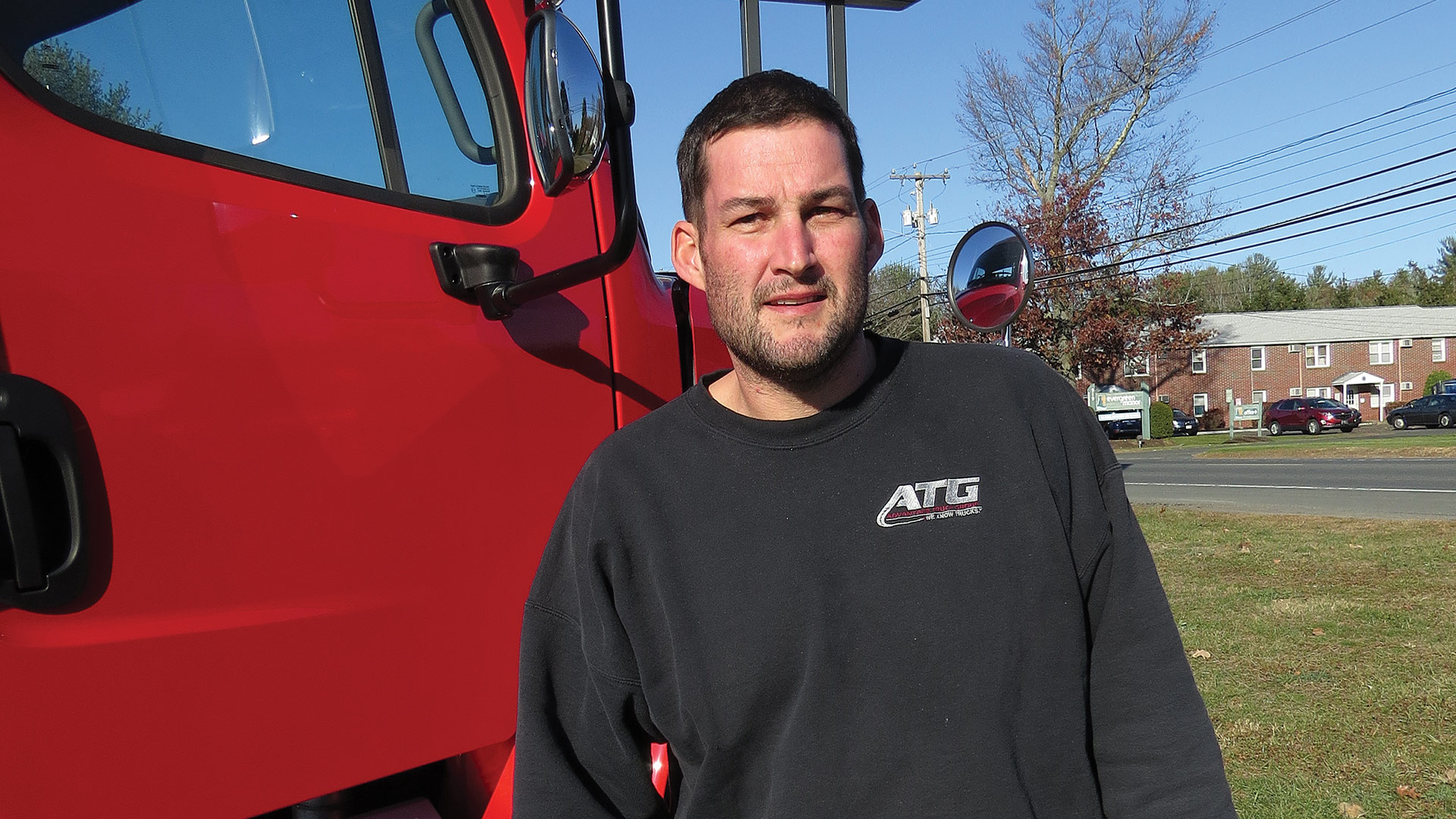 Mike Howard, assistant manager of ATG Westfield, stands by one of the many trucks for sale at the facility on Southampton Road.

John Paulik summed things up by saying that “something had to give.”

That’s how he described some conflicting forces within the truck sales and service industry in the Northeast, specifically an ongoing pattern of consolidation among many of the players, as well as a desire for some of these players to stay independent.

Again, something had to give. And it did.

While in most respects it looks like a merger, he called it a “joint venture,” the coming together roughly a year ago of Tri State Truck Center of Shrewsbury and McDevitt Trucks, which owned the Patriot Freightliner dealership on Southampton Road in Westfield — along with three other dealerships in New Hampshire and one in Vermont — to create Advantage Truck Group, or ATG.

This larger entity, a comprehensive dealer network, is now the largest Daimler Trucks North America (DTNA) dealer network in New England, said Paulik, its senior vice president and general manager, and it uses this size and geographic reach to, well, its advantage as it specializes in sales, service, and support of DTNA’s Western Star and Freightliner branded trucks.

“Merging all these locations under one roof just made a good deal of sense on a number of levels — central management is a great advantage,” he said, noting that there are economies of scale to be gained and other benefits from the sheer size and scope of the operation. “Another advantage is that we’re not competing against one another anymore.”

Paulik said ATG’s customer base is broad and diverse, meaning it includes large fleets, small owner-operators in myriad businesses, and just about everything in between, including municipal vehicles, ambulances, and utility trucks. For entities of all sizes, keeping trucks on the road is the obvious goal, and ATG supports them in this quest in a number of ways.

For example, it has the largest parts network in New England, supported by a fleet of 25 parts-delivery vans that provide daily service to customers. There’s also an on-site maintenance program and on-call access 24/7/365 to emergency roadside assistance.

But while the business keeps rolling — that’s an industry term — and the merger, or joint venture, is working as those who orchestrated it had hoped it would, there are a number of challenges to continued growth, said Paulik, especially the recruitment of a skilled workforce.

“These small businesses can’t afford to have their vehicles down — that’s their livelihood. When their truck is down, we help get it back on the road again.”

And by workforce, he means much more than diesel technicians, although that’s a big part of it. Indeed, the challenge extends to every facet of the business.

“The biggest story for us is finding employees — not only technicians but parts people, warehouse workers, and those in truck sales,” he explained. “It’s all down the line.”

As a result, ATG works with local schools and the state’s workforce system to bring attention to the many attractive career opportunities within the trucking and transportation industry.

“We’re working to help young people interested in the trades and all aspects of this industry,” Paulik went on. “Yes, there is a huge problem with hiring technicians, but a dealership is more than just technicians; a dealership has many job titles.”

Backing up a bit — something else they do in this industry — Paulik said there were a number of forces that brought Tri State Truck Center and McDevitt Trucks together. Primarily, though, it was the size, strength, and flexibility that such a union can provide that made it attractive.

“DTNA has been promoting dealer consolidation for some time — it’s looking for regional rather than individual dealers,” he explained, adding that there were several reasons why such consolidation was somewhat slow to develop in New England — primarily because several of the locations were family owned, well-established in their respective markets, and wanted to stay independent.

But given the current climate, it simply made sense to bring the two companies and their various locations under one central ownership.

“This was the right time to do this — to create a regional truck dealership group,” he told BusinessWest. “This gives the customers a higher level of support, and it aligns the two dealers.”

Thus, the ATG name is now over the door of the sprawling Westfield facility, as well as those in Shrewsbury, Seabrook, N.H., and Westminster, Vt. Affiliated McDevitt dealers in both Lancaster and Manchester, N.H. are also part of the ATG dealer network.

The Westfield location, which, like the others, is well-situated off major arteries (in this case the Mass Pike, Route 20, and Routes 10/202), sells more than 100 trucks on average each year, and will service more than 700 vehicles of all sizes, from 18-wheelers to municipal vehicles, such as DPW and trash trucks.

ATG’s commitment to providing the highest standard of service for its customers is rooted in its dedication to Elite Support, said Paulik, referring to a collaborative initiative between Daimler Trucks North America and its dealers to improve the customer experience at Freightliner and Western Star dealerships. Elite Support certification involves a rigorous continuous-improvement process that covers all areas of customer service, overall quality of workmanship, rapid diagnosis, turnaround times, robust parts availability, and exceptional customer amenities. Both the ATG-Shrewsbury and ATG-Westfield locations are Elite Support-certified, he noted, and the company is taking the necessary steps to achieve certification at its other Freightliner and Western Star dealer locations.

ATG is adding resources and expanding other customer-support initiatives across its dealer network, he went on, including a “warranty on wheels” program for Freightliner and Western Star vehicles that enables warranty work to be performed by ATG technicians on site at customer locations, and service vans in each state that provide on-call access 24/7 to emergency roadside assistance for a wide range of vehicle brands. Meanwhile, dedicated service and support staff at each dealership have access to information systems that have been integrated across all ATG locations to give customers real-time visibility of parts inventory and service and repair status.

These are just some of the advantages that come with this joint venture, said Paulik, adding that the customers, which, again, come in all sizes, are the real beneficiaries.

Elaborating, he said that, while ATG handles a number of large fleets, including those for Stop & Shop, Burke Oil, and Regency Transport, among many others, the majority of its customers are smaller, locally based businesses that rely on their trucks to keep products moving and revenue coming in.

“We focus on local businesses, and we treat smaller businesses like large ones,” he told BusinessWest. “These small businesses can’t afford to have their vehicles down — that’s their livelihood. When their truck is down, we help get it back on the road again.”

Looking down that road, Paulik said the creation of ATG will continue to bring benefits for the dealers in the group as well as the customers they serve.

As he said at the top, something had to give, and what has emerged from this joint venture is a dealership group well-positioned to stay in the fast lane for years, and decades, to come.