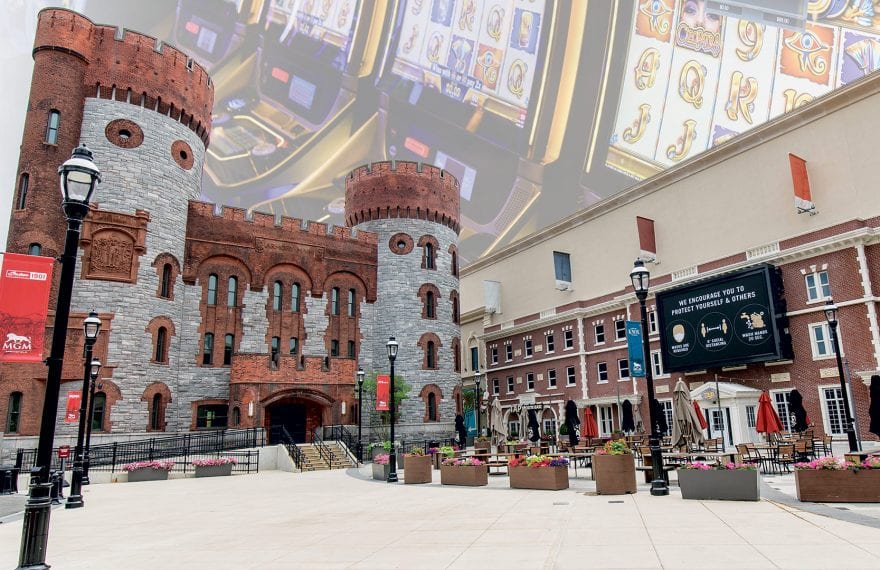 But MGM Springfield Leader Optimistic About the Next Chapter 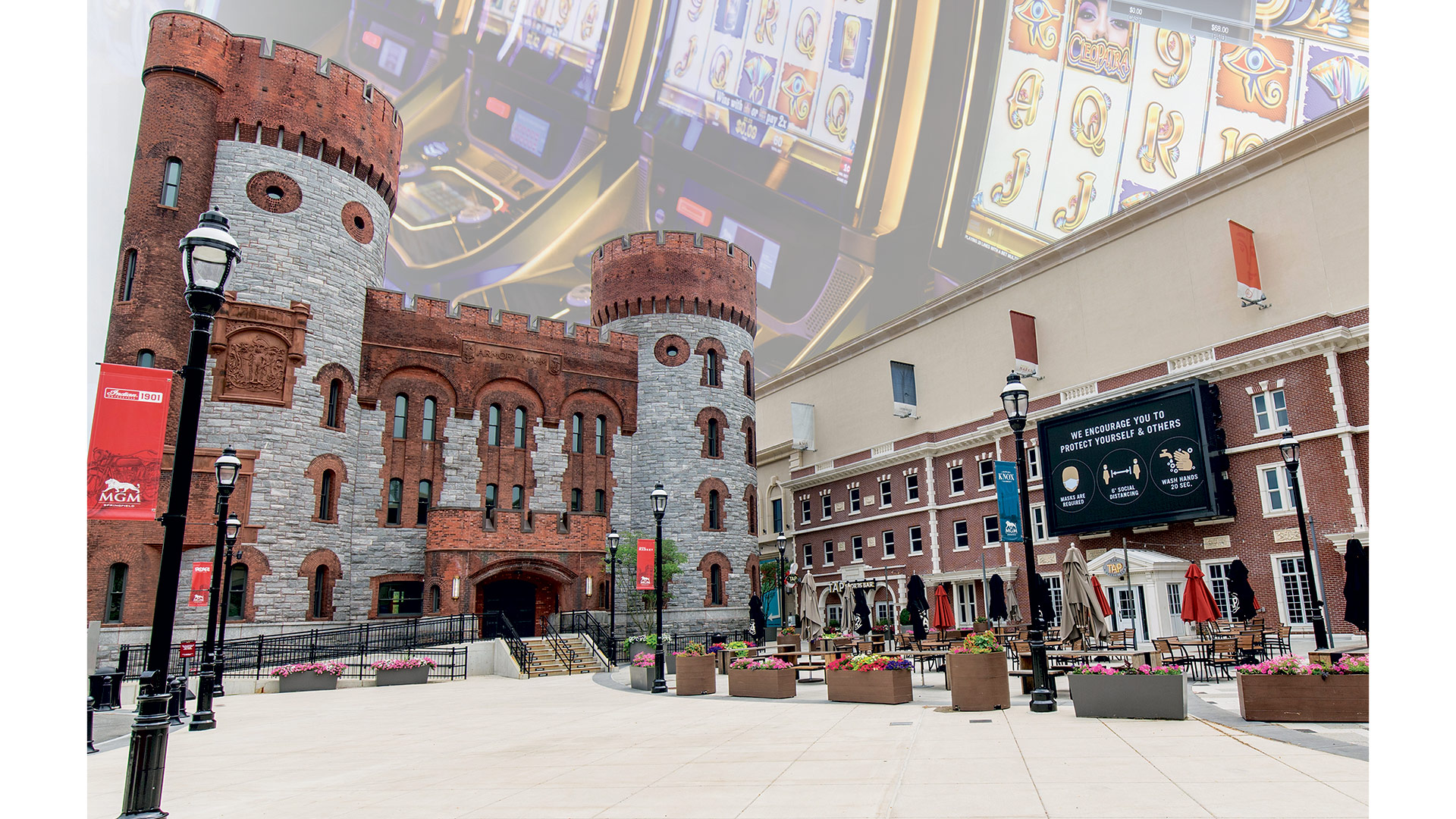 Chris Kelley had just arrived in Springfield and was still getting acclimated to the region when the COVID-19 pandemic arrived almost exactly a year ago.

Then, he had to get acclimated to something else — something no one in the casino industry had ever seen or been forced to endure before.

“These facilities just weren’t meant to be closed,” said Kelley, president of MGM Resorts’ Northeast Group, which includes MGM Springfield. But they were, of course — for four long, brutal months, before finally reopening in July, but only at one-third capacity and with a number of restrictions in place. Later, the state’s casinos had to reduce hours and close at 10 p.m. as a late-year surge in cases moved the goalposts again.

Now, some restrictions are being eased, and later this month, the state will enter what is known as step 1 of phase 4, prompting Kelley to glance toward the future with optimism in his voice. But in all ways, and by all accounts, the ‘ramping-up’ period for MGM Springfield — the one we all heard so much about in the months before COVID dramatically changed the landscape — has been turned on its ear.

“People are just really excited to be part of bringing downtown West Springfield back.”

In some ways, it will be like starting over for this operation, which recently reopened its hotel for weekends and also its sports bar, and is waiting with what can only be called bated breath to see if and to what degree patrons will return to the blackjack tables, slot machines, bars, and, eventually (but no one really knows when) large-scale events like concerts, shows, and fundraising galas.

In a wide-ranging interview, Kelley, who has remained mostly quiet, from a press perspective, since arriving in this region, talked with BusinessWest about the past year, but mostly about what comes next for this highly visible, nearly $1 billion business that opened to great expectations 32 months ago.

That look back was understandably painful, although he said the past year has certainly been a somewhat beneficial learning experience on many levels (more on that later) and a time when changes coming to the industry were greatly accelerated.

As for the future … it is obviously clouded by question marks that involve everything from how much pent-up demand there will be for everything a casino has to offer, to the fate of sports gambling in the Bay State. 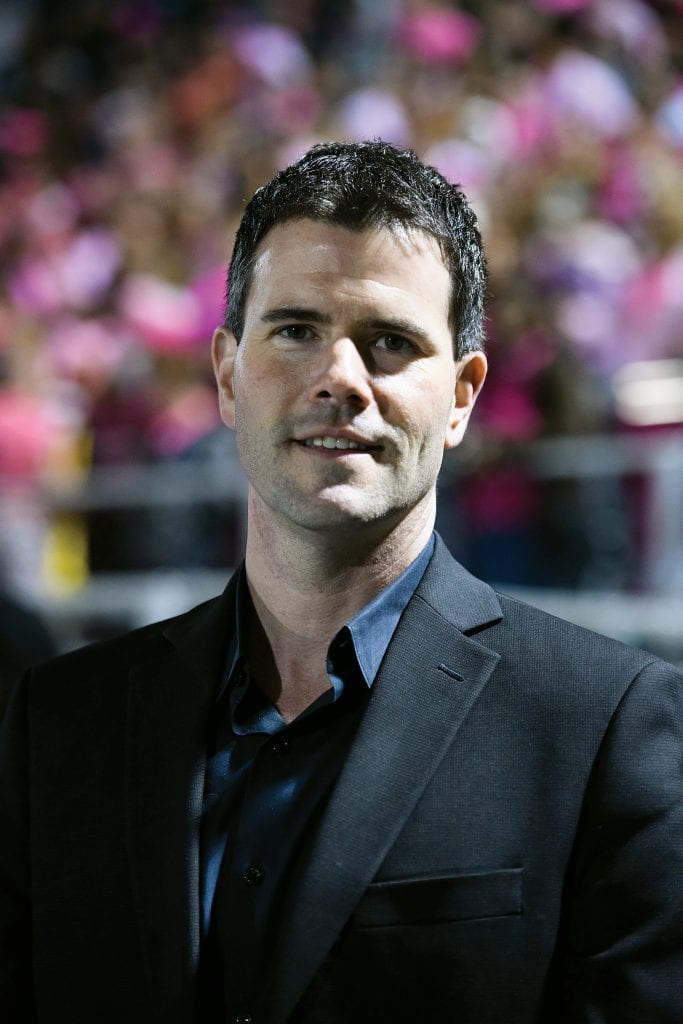 In some ways, Chris Kelley says, it feels like starting over at MGM Springfield.

Kelley is optimistic about both.

He said Las Vegas has recently returned to its 24/7 character and something rapidly approaching conditions that existed pre-COVID — and the early indications are certainly positive.

“With vaccine distribution ramping up around the country, there’s good reason for cautious optimism as we look at our ability to gather in larger numbers, and for our industry, in the broader sense, to see improvement as opposed what it was experiencing only a few months ago. As we look at the calendar year 2021, I think we see significant opportunities for improvement, especially as we move into the second half of the year.”

As for sports betting, he said several bills are in various stages of talk and progression through the Legislature, and he’s optimistic that the state will ultimately pass one, especially with other states already doing so, with revenue flowing to them as a result. More important than simply approving a bill, though, is passing legislation that will enable the state to effectively compete and ultimately become an industry leader in this realm. Such a bill might bring $50 million in additional tax revenues to the state annually, he projected.

“We’re looking for Massachusetts to be able to compete with all of the surrounding states that have or soon will have sports betting,” he said, noting that Connecticut will soon be in that category. “A level playing field for MGM and the other casinos in the state is very important, as is giving our customers an amenity, and an experience, that they’ve been asking for now for years.”

Reflecting on the past year, what it was like, and even what he’s learned as a manager, Kelley started by flashing back to what were the darkest of days — when the casino was closed and there was no indication of when it might open again.

“It’s a very uncomfortable experience to walk through these facilities when they’re dark and there’s no activity and action — the sights and sounds that ultimately drew us all into this industry,” he told BusinessWest, noting, again, that once a casino cuts the proverbial grand-opening ribbon, its doors are never locked.

The fact that they had to be locked was just the first in a string of unprecedented steps that defined the next several months, from the shuttering of the hotel and restaurants to the cancellation of scores of events that were on the books, to ultimately laying off two-thirds of the employees working at the casino before the pandemic arrived.

Overall, Kelley said, this has been a humbling experience in some ways — a challenging time, to be sure, but also a learning experience and an opportunity to accelerate, out of necessity, some changes that were coming to the industry anyway.

“No business model for any company will be exactly the same, post-COVID,” he explained. “We have innovated along the way, adopting best practices, and many of those will remain, to the benefit of the guests,” he told BusinessWest. “Digital innovations are an area I would point to; MGM Resorts and MGM Springfield were already headed toward many digital innovations pre-COVID, but the pandemic really accelerated the implementation of those efforts — things like digital menus, the use of QR codes, mobile check-in, and digital keys; those things will remain, and those are a positive part of the guest experience today and moving forward.”

Elaborating on what was learned and how the casino and its staff responded to the rapidly changing landscape, Kelley said some valuable experience was gained that should benefit his team moving forward, especially when it comes to — here’s that word again — pivoting.

“We want to make it more walkable, more friendly, and more inviting so we can complement the business investment that’s happening there.”

“When the pandemic hit, it was a huge learning experience for everyone in this industry,” he said. “We all had to create new ways of operating and coping with restrictions that we had never experienced before. We put an emphasis on internal communications and external communications with our guests, and we found ways to stay in contact with our teams virtually. And through this process, we’ve been working hand-in-hand with our state and local officials and our community partners to weather this experience with the strength and support of each other. That ability to come together as a community during times like this is the silver lining to a very difficult period.

“As a team, we recently discussed the importance of leadership agility,” he went on, “because we have had to learn how to be very nimble and adjust to ever-changing conditions, which I believe will ultimately benefit the business in coming out of all this.” 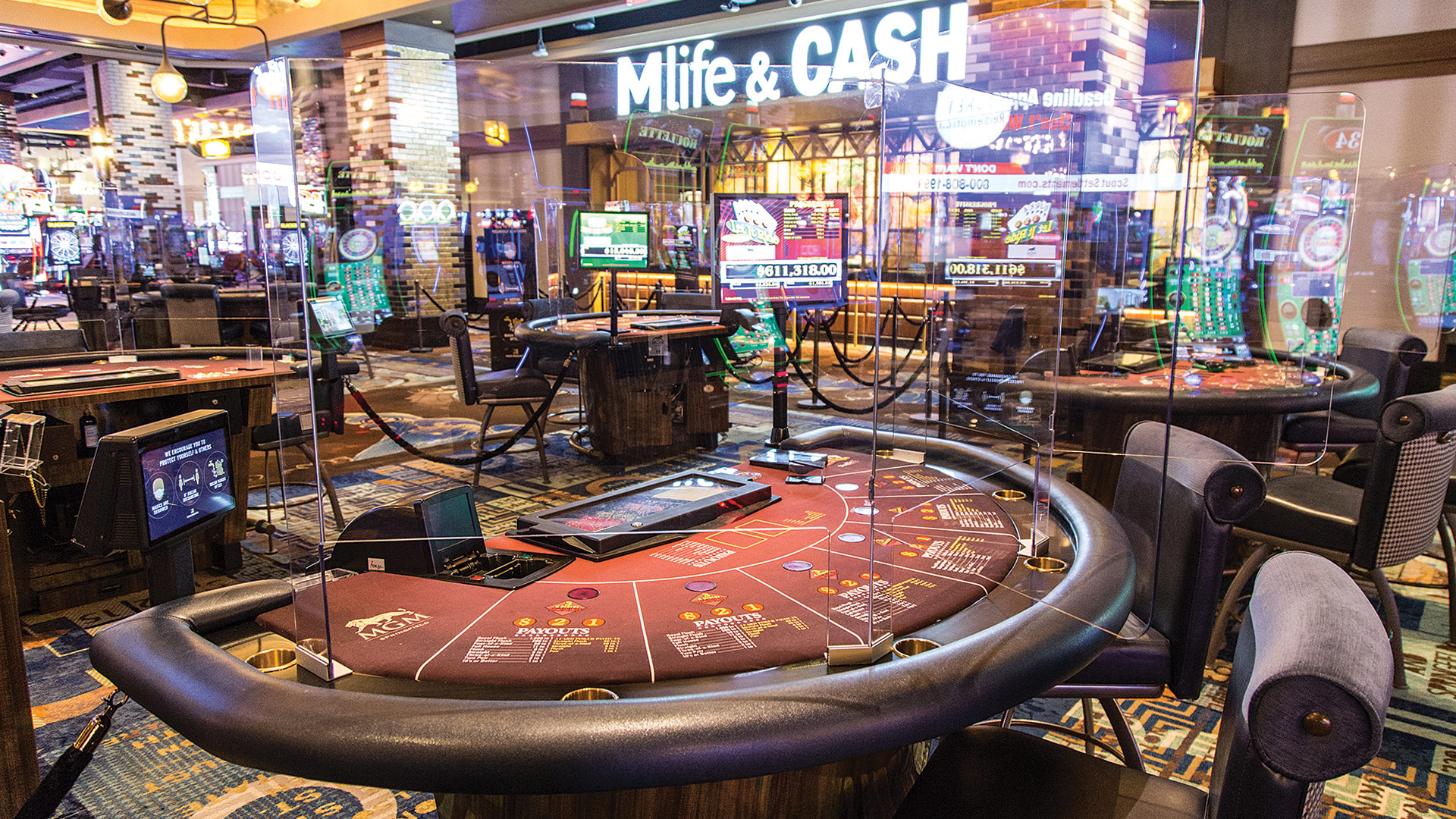 Barriers at the gaming tables and social-distancing reminders have been facts of life during the pandemic at MGM Springfield.

In recent months, business — and gross gaming revenues — have steadily improved, said Kelley, and this has been while the hotel and some restaurants have been closed. Looking forward, he expects this trend to continue and for there to be a good amount of pent-up demand for casino-style entertainment.

“It remains to be seen what the reaction of our communities will be to a vaccinated population, but we’re optimistic that we’ll see the return of guests to our property,” he said. “We had seen resiliency even during this time.”

The hotel reopened on a limited basis the first weekend in March, he went on, with the goal being to gauge guest demand and comfort levels and then adjust the business model accordingly. He said initial bookings have been positive, and he expects improvement to come gradually.

As for events in the casino’s various venues — gatherings have brought people and energy to the downtown area and business to a number of hospitality-related ventures — Kelley said it is too early to know when this aspect can resume.

“Ultimately, that will be up to the state to determine,” he noted. “What we can do is make sure that we’re as prepared as possible for that day; we do discuss those things frequently, and we’re actively engaged in planning for the return of those amenities.”

Speaking of being prepared … this is exactly what the casino is striving to do when it comes to another key focal point moving forward — sports betting.

New Hampshire became the 16th state to legalize such betting (there are now 22) in July 2019, and officially went live in late December that year. Meanwhile, Connecticut has taken huge steps in this direction, although some complicated negotiations remain between the many parties involved when it comes to where venues will be located, how many there will be, and who will operate them.

As for the Bay State, Kelley counts himself among those who believe it’s a question of when — not if — sports betting gets the green light, and he obviously considers that step pivotal if the state’s casinos are going to going to tap the full potential of what has long been considered an attractive market. 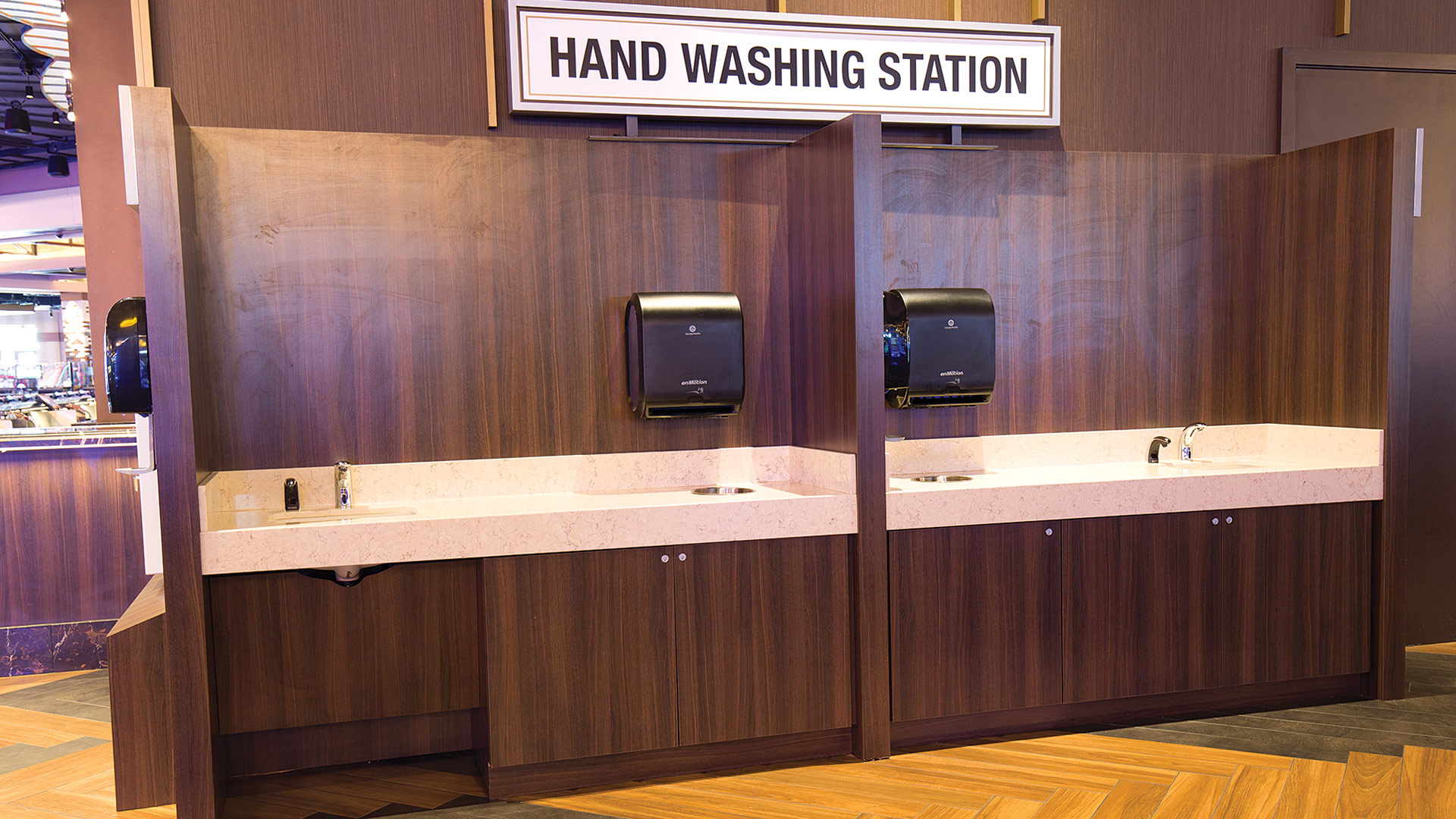 But he stressed repeatedly that his focus is not simply on working with state legislators to pass a bill, but to create a playing field on which the state’s casino can effectively compete. And this is the consistent message he and others with MGM have been delivering to state officials.

“We’re encouraged by the number of sports-betting bills that have already been introduced, and each of the bills that has been drafted has been tailored to the unique interests of the sponsor,” he explained. “So we’ve been focused on advising lawmakers on what our experience has shown us.”

Elaborating, he said this experience has shown that the lower the tax rates are on sports-gambling revenues, the better one’s odds are of effectively competing against what he called the “illegal markets,” and also against the growing number of neighboring states already in or soon to get in this game.

He said the casino has a plan in place and has the ability to move “very quickly” when state legislators decide to pull the trigger.

“We’ve spent a lot of time looking at the property and where a sports book makes sense, and also at how to create an experience that would really be a market leader and that will benefit the community at the same time,” he explained, adding that there is a good deal of experience in this realm within the MGM corporation that he and his team can benefit from. “We’ll have many resources to draw upon, and we’re excited about that.”

Reflecting again on those dark times that coincided with his arrival in Springfield, Kelley said those memories linger, even as many can see that proverbial light at the end of the tunnel. And they make him appreciate a return to something ‘normal’ even more.

“To see us moving back in the direction of offering those positive moments, those positive milestones, those positive experiences for our guests, is extraordinarily gratifying, and part of what I love about this business,” he said, adding, again, that while question marks still dominate the landscape, he remains optimistic about not only turning back the clock to pre-COVID levels of revenue and progress, but setting the bar higher.

Ultimately, this story is still in the early chapters, he told BusinessWest, and the ones to come will hold plenty of intrigue.