There will be food, live music and raffle prizes at the event. Proceeds from the sale of a signature “Cool Cats Shandy,” sponsored by Wellfleet and brewed by White Lion Brewing Company, will be donated to Link to Libraries. “Cool Cats Shandy” will also be available for purchase at outlets in Western Mass.

“Link to Libraries is so grateful to Wellfleet and to White Lion for hosting this fabulous event that is not only fun but also to raise much needed funds to help ensure that underserved children in our region have access to the books they so desperately need,” said Laurie Flynn, president and CEO of Link to Libraries. “Our community is still reeling from the devastating impact COVID had on literacy, which means getting books into the hands of children is more important than ever.”

Drew DiGiorgio, Wellfleet’s President and CEO added, “this is a fun and innovative way to partner with Link to Libraries and work with the team at White Lion, who do so much to help our community. At Wellfleet, we treasure the opportunity to give back by supporting organizations like Link to Libraries, which increases access to books and fosters a love of reading among Springfield schoolchildren — something so important to a child’s success in school and in life.”

“Our brand is built on the community’s fabric, creating a diverse, inclusive, and fun place to be in downtown Springfield,” said White Lion Brewing Company business partner and head brewer Mike Yates. “We look to replicate much of that exciting vibe in downtown Amherst. As a UMass-Amherst alum and a resident of the Happy Valley, I could not be happier to be back in Amherst. I built much of my professional brewing career here and I look forward to bringing brewing back to downtown Amherst. We plan to activate 104 North Pleasant St. with an eventual nano-brew house offering one-off experimental ales, a test kitchen, taproom, and outdoor social space.”

Gabrielle Gould, executive director of the Amherst Business Improvement District, said the partnership the culmination of an ongoing three-year conversation with White Lion founder and president Ray Berry. “Collectively, patience appears to have paid off — a partnership between White Lion and Marcus Camby is an all-star win for the business district.

“The Amherst BID’s vision is to curate businesses that complement our already outstanding and loved small businesses,” she went on. “This is just the beginning as we rebuild and create a vibrant downtown for residents, scholars, and visitors to enjoy over and over again.”

Said Camby, “our partnership extends beyond a conventional business venture; it was important for me to engage the greater Amherst community. I have witnessed White Lion do amazing things in the greater Springfield area; I am confident we can capitalize on that momentum and utilize my career relationships to enhance the downtown Amherst experience. Lastly, the centerpiece of success is to work with Umass-Amherst and the local education community to create opportunities for the next generation of leaders.” 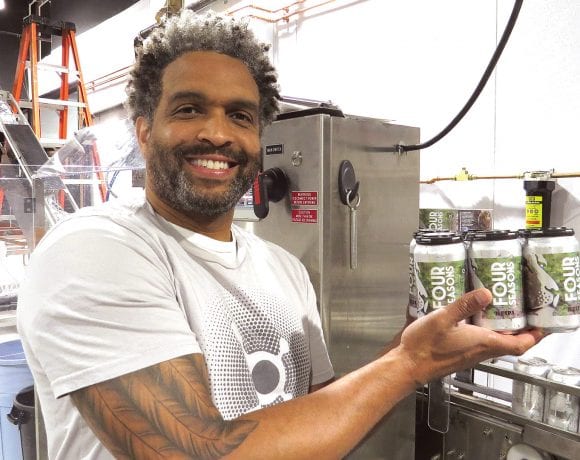 After a Year to Forget, This Springfield Label Is Ready to Roar 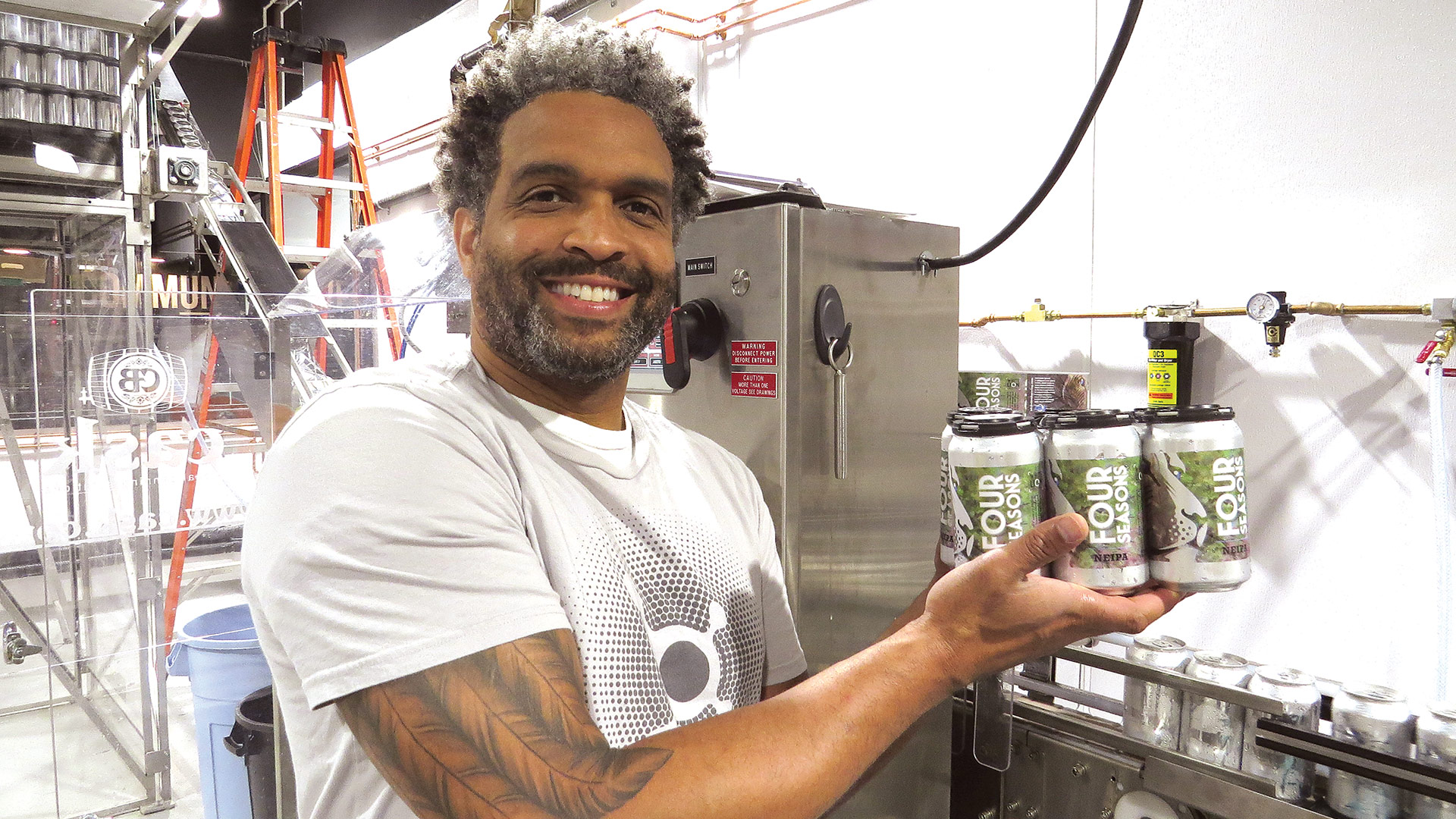 Ray Berry, seen here at the canning line at White Lion’s downtown Springfield brewery, is moving on from ‘cans to go’ to the next chapter in the story of this intriguing business venture.

He called the promotion ‘cans to go,’ which pretty much says it all.

Indeed, while he could brew his craft-beer label, White Lion, at his new facility on the ground floor in Tower Square, Ray Berry couldn’t sit any visitors at the attached pub because the facility wasn’t finished and painstakingly slow in its progress. But he could sell cans to go — and he did, quite a few of them, in fact — on Wednesdays and Saturdays from 2:30 to 7 p.m.

May 26 was the last of those Wednesdays, and the last day for the promotion. Berry was sad to see them go. Well … sort of, but not really.

He called a halt to cans to go so he could direct 100% of his energies into the next phase of the White Lion story, a chapter that has been delayed more than a full year by COVID-19 — the opening of that much-anticipated downtown brew pub and a resumption of outdoor events with the now familiar White Lion logo attached to them.

“We want to make sure all the I’s are dotted and T’s are crossed, take a pause, exhale, and made sure everything is in place for our June opening,” he said. “We want to be ready to really hit the ground running.”

As he talked with BusinessWest, Berry was checking the schedules of a number of prominent elected officials, trying to find a date when most of them could attend a ribbon-cutting for the opening of his downtown facility. That ceremony will be both a beginning and an end — a beginning, as we noted, of an exciting new chapter, and the end of 15 months of COVID-fueled frustration that didn’t derail White Lion, but struck at the absolute worst time for the brand born in 2014. 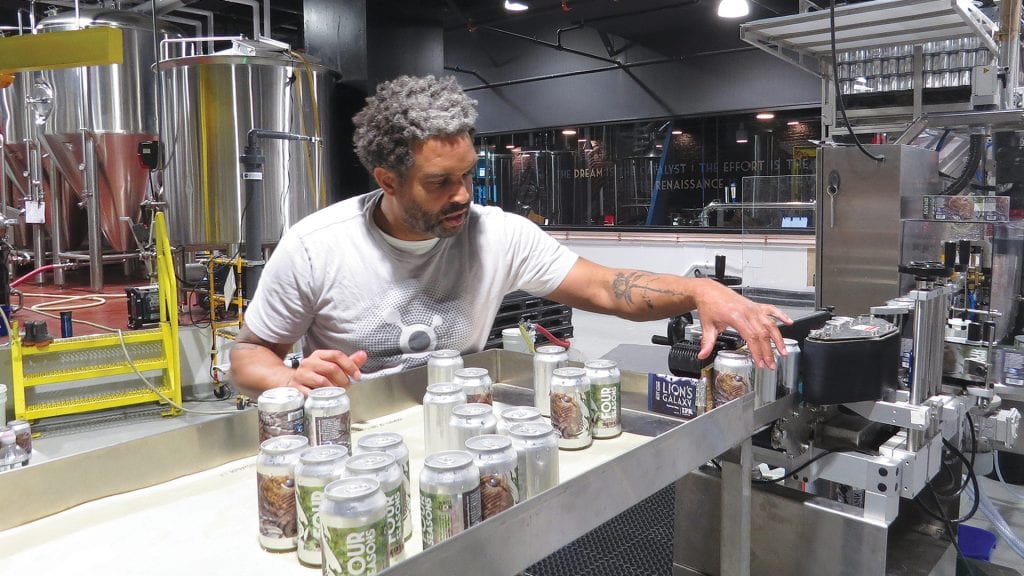 “COVID set us back a full year,” he said, adding that the owners of Tower Square, who also act as the general contractor for the buildout of his facility, had set May 2020 as the date for that project to turn the key and open for business. “We’ve been creative, and we’ve made a number of pivots along the way and diversified our portfolio, but the bottom line is we lost a full year and more.”

He said moving up the timetable for fully reopening the state will certainly help, giving him an additional 10 weeks of operating without restrictions that he wasn’t anticipating — although he was watching the situation closely and was hoping the date would be moved.

“We’ve been creative, and we’ve made a number of pivots along the way and diversified our portfolio, but the bottom line is we lost a full year and more.”

“We were already going to gear up for some sort of opening during the month of June,” he explained. “But we always wanted to be in a situation where any opening would be an unrestricted opening first, rather than a restricted opening, so we’re very happy to be in this new normal.”

Berry acknowledged that the office crowd that has helped make his outdoor events so successful — and will be one of his target groups for his Tower Square facility — hasn’t come back yet, may not return until the fall, and certainly may not be all that it was, sizewise, at the start of 2020. But he said that audience is just part of the success formula for this endeavor and that the ultimate goal is to bring people into downtown from outside it.

“We’ve never predicated our business model on one particular group,” he explained. “Craft breweries are destinations — they are considered experiences to the consumer. So consumers will take it upon themselves to find out where the local craft breweries are.

“Even when we had cans to go two days a week, we would have an influx of people from outside the area who would say they were driving through or were eating somewhere local downtown and looked up ‘local breweries,’ and White Lion popped up, so they came in.”

As for other aspects of the White Lion business, Berry said the beer garden that was a fixture in the park across Main Street from Tower Square will return in some form in 2021 — and at multiple locations. He’s currently in discussions with those running Springfield’s Business Improvement District and other business partners to schedule what he called “a series of special events that will encourage people to come out and support the local businesses in the downtown corridor.”

Overall, a dream that was years in the making took another full year to finally be fully realized. But, at long last, White Lion is ready to roar to life in downtown Springfield.