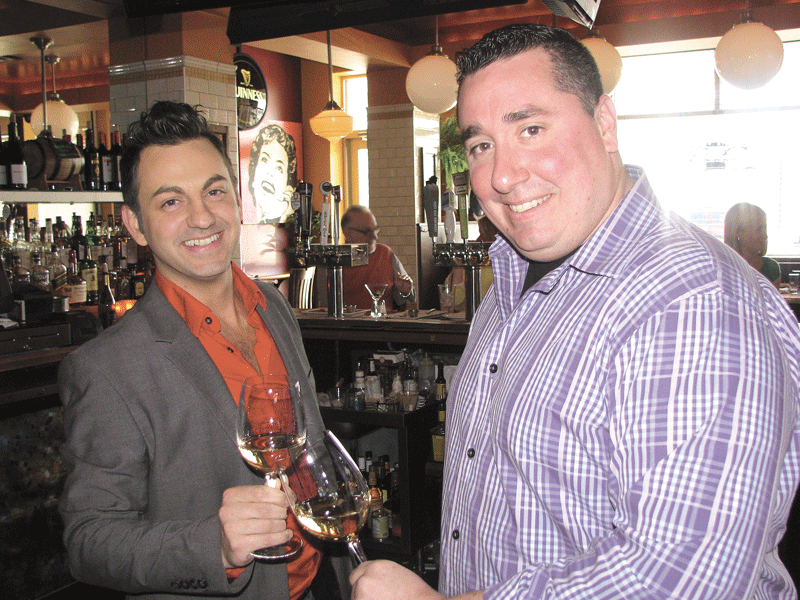 Michael Sakey said restaurants often conduct a soft open with family and friends to work the kinks out before opening the doors to the public.

In the case of Center Square Grill, the East Longmeadow eatery he and business partner Bill Collins launched last spring, the soft opening got a little out of hand. Of the 600 or so people they invited, only 250 said they would come — but 450 showed up.

“By 8 o’clock, we were out of vegetables; then we ran out of proteins,” Sakey said.

Yet, they were enthused by the response to the food that was served — and they’re still excited a year later.

“Sometimes I have to pinch myself,” Collins said. “It’s been a great ride. We’re psyched with our numbers, and the reviews have been great — four and a half stars on Yelp.”

The pair partially credits their success to their chemistry in the kitchen and business, forged over a 15-year friendship, during which they worked for Claudio Guerra, the serial restaurateur behind Spoleto and a broad array of other establishments.

“Not only have we been great friends for a decade, but in business, we both bring different things to the table,” Collins said, recalling how a chance conversation over glasses of wine about 18 months ago turned into a plan to launch their own enterprise. “When we started talking about doing this, it just snowballed.”

Their success in getting off the ground startled them, but also gave them confidence, he added. “We raised the money to buy the place in two and a half weeks. Once we got a ‘yes’ from one investor, we were more comfortable in the next meeting, and the next. By the last meeting, we were like, ‘are you kidding me? Why wouldn’t you invest in our business?”

Opening the doors was a leap into the unknown, but entrepreneurship has suited them so far.

“When we were first talking about a concept we liked,” Collins said, “we thought, ‘wouldn’t it be great if we opened this place, and it didn’t go out of business? That would be really cool. Then, once we got a little more secure, we started to think we’d actually make it. It’s been a ride, going from being salaried employees, getting a paycheck every week, to making sure everyone else gets their paycheck every week.”

For its annual Restaurant Guide, BusinessWest sat down with Sakey and Collins to talk about wine, local produce, restaurant reviews, and the mentor they both credit with giving them the confidence to succeed on their own.

“I always joke that I was an accidental restaurateur,” said Sakey, adding that he studied theater in college. Even then, though, he was a restaurant veteran, having worked at pizza, sub, and coffee shops from age 14. In early 2000, he took a job with Guerra, who was opening Spoleto Express at the time.

“I went in thinking, ‘it’s just going to be for now, until I figure out what’s next.’ Over the next 12 years, it spiraled into spearheading the catering division, helping open many restaurants for Claudio, and becoming really good friends with Bill.”

He was also starting to sense a connection between food and his other passion. “Restaurants can be theatrical,” he said. “It’s kind of like throwing a party every night. If you can make them all happy, that’s something really unique, not like any other industry I can think of.”

Collins knew at a younger age where his career was headed. “I’m an un-accidental restaurateur,” he said. “I joke that I wish being a doctor ran in my family, but, no, my family owned restaurants and hotels in New York.”

He started working in those businesses from a young age and rose through the ranks. “I was the youngest restaurant manager ever hired by Applebee’s,” he told BusinessWest. “The head of HR met with me, tapped me on the shoulder, and said, ‘please don’t tell anyone you’re under 21; I might lose my job.’” 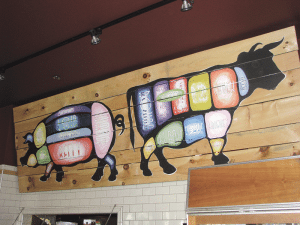 Local art — fitting for the fare served up at Center Square Grill — livens up the restaurant’s interior.

Collins met Guerra in 1999, when he was 19. While holding down his managerial job at Applebee’s, he worked as a waiter at Spoleto, just to get his foot in the door in a company he had long admired. He eventually became director of operations. “I wound up opening six concepts with him — and we closed some concepts, too. I got to see the good, the bad, and the ugly. He’s been my mentor in the business.”

Sakey recalls how one location Guerra owned morphed from a fine-dining restaurant to something with a pub feel, then to what is now his flagship Spoleto location. “To have three different concepts in one location and still come out on top … it really does take a unique individual to weather the storms of this industry and know when to change and admit to himself that, even though he liked a concept, it wasn’t working as a business.”

As for Center Square Grill, the partners have broken away from the Italian fare Guerra specializes in. “We call ourselves a creative American grill, but we pull from South America, classic French cooking, New Orleans, Jamaica — we even had some Asian dishes,” Sakey said. “We try to do many things well.”

Collins noted that there are about a dozen Italian restaurants in a 10-mile radius, and families tend to go to their favorite. So he and Sakey wanted to bring more variety to the table.

“My favorite thing about the menu is, if you want to come in and get a cheeseburger and an IPA, you can do that,” Sakey said. “If you want to take your wife out and have oysters and a filet topped with crab Oscar, you can do that, too. The menu runs the gamut, and the atmosphere does, too.”

Indeed, the restaurant features a few different dining areas, from a formal dining room to a small room for private events to a lively bar area. “The tap room is where we meet the regulars; they’re actually friends now,” Sakey said, recalling how one regular and her mother were sitting at the bar, talking about making homemade ravioli, and he joked that they should bring him a couple. “The next day, they brought in two platters — one for each of us — and said, ‘dinner’s on us tonight.’”

Guerra himself has visited the restaurant on several occasions, and the partners said he has been supportive of their new venture. “He taught me the culinary side,” Sakey said. “I made my first roux working with him — ‘no, you’re browning it too much, you want that nutty smell’ — but he also taught me front of house. For a guy in chef whites to be just as good in front, that’s incredible.”

Collins agreed. “The guy doesn’t miss a detail in front of house. He burned a lot of that into us.”

The employees have picked up on that sense of pride, Sakey added. “I can’t speak more highly about the staff. Front of the house, back of the house — they take such ownership of what they’re doing. It’s unique and amazing.”

Collins said that Center Square Grill has stayed true to its original core of steak, seafood, and pasta, but the menu offers many iterations on dishes in those categories, and others.

Changing the menu also keeps people coming back to try new things, he added. But the regulars do have their favorites, including a crispy duck confit with house-made tomato jam, butternut squash risotto, and seasonal vegetables; seared Maine diver scallops over asparagus risotto and finished with a lemon thyme beurre blanc; Jamaican jerk chicken thighs marinated in a Caribbean rub and served over dirty rice with black bean corn salsa and chiptle aioli; and a slow-braised lamb shank with creamy polenta and seasonal veggies, finished with a twice-reduced port wine demi-glace.

Collins has been on a mission to create lamb converts with the latter dish, arguing that people who say they don’t like lamb are thinking of their grandmother’s gamy-tasting lamb topped with mint jelly. So he created a lamb-based amuse-bouche to give reluctant diners a taste. “I’ve converted every single one of them. I have people who said ‘I don’t like lamb’ ordering the lamb shank.”

Sakey takes particular pride in the restaurant’s impressive — and affordable — array of wine, beer, and cocktails.

“I think our wine program is one of the things that makes us unique. Bill and I know what wine costs, and when we go out and see a bottle of wine being sold for five times the cost, it’s hard to take the leap,” he told BusinessWest, noting that some restaurants mark up the price three or four times what he does. “We want people to be able to try more than the house wine and not worry about getting taken.” 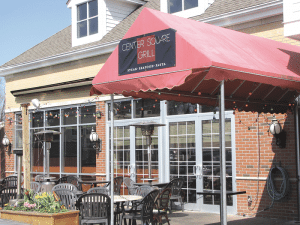 Warmer weather means ideal conditions to enjoy a meal or drinks on the restaurant’s outdoor patio.

To make sure the food keeps bringing people back, the restaurant recent hired Andrew Brow as head chef. “He was chef at a French bistro in North Carolina, but had moved up here to be closer to his family,” Collins said.

Brow took a job as director of operations for Rachael’s Smoked Fish, a division of J. Polep in Chicopee. But his passion for the chef’s life eventually took over. “We wanted him to come in one or two nights, to keep his hand in it, and eventually he left Rachael’s and came here full-time. We’re fortunate — he’s been in the food business all his life.”

Collins characterized himself and Sakey as foodies, noting that they visit other restaurants regularly, keeping abreast of what’s happening in their industry. That passion for food, however, is balanced by what they call a refreshing lack of ego. “It’s collaborative; if Mike has the better idea for a dish, it goes on the menu. If I have a better idea, or if Andrew has a better idea, that goes on the menu.

“I’d be lying if I said there wasn’t a little ego, but it’s ego about getting the best product on the menu,” he went on. “It’s a full-on collaboration. It’s a great process, and it keeps us all energetic about finding new ideas. You don’t want to be the one guy at the table without an idea.”

It has been, by any measure, a strong first year at Center Square Grill. “I don’t think we’re just lucky,” Collins said. “It’s taken a lot of hard work. But we’re fortunate in the way the outcome has turned out.”

As for that four-and-a-half-star Yelp rating, Sakey likes it just where it is, noting that it’s a reminder that he, Collins, and Brow can always aim just a bit higher. “Nothing’s ever perfect,” he said, “but we can be really good.”

“The drive for five fuels my passion for food,” he said, saying it’s a constant obsession. One day, he was telling a friend about a conversation he had with his fiancée, Julia, while lying in bed, telling her about an idea for a new dish.

“Someone overheard me talking about that, and they said, ‘that’s your pillow talk?’ But I’m always thinking about what I’m going to do next, what’s going to be on the table the next day.”