It’s Time to Nominate an Outstanding 40 Under Forty Alum 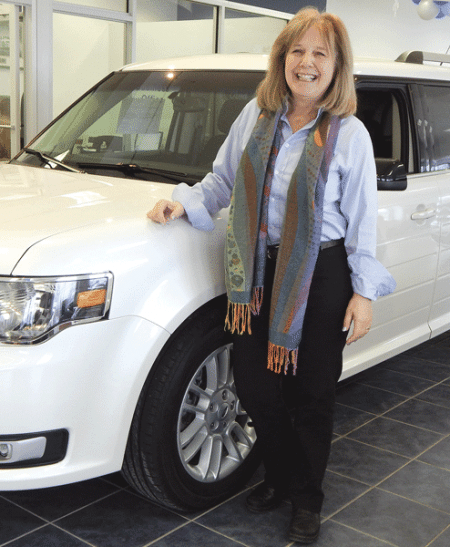 Bonnie Nieroda says she encountered a “boy’s club” when she first started selling cars, but times have changed in some respects.

When Carol Buker started selling Fords 42 years ago, it wasn’t unusual for her to encounter blatant sexism. Some male customers refused to talk to her, while others didn’t believe a word she said.

“I remember one man who came to the dealership wanting to know about trucks; he told me, ‘I am not about to talk to you,’” said Buker, a sales and leasing consultant for Toyota of Greenfield, adding that the roles of men and women had been set in stone and many people didn’t feel a female had any credibility or belonged on the sales lot.

Bonnie Nieroda faced similar challenges that were exacerbated by male co-workers who wanted to drive her out of the business.

“It was a tough industry, and selling cars was a boy’s club,” she said, citing memories of a finance manager who refused to process her deals because the salesmen didn’t want her there. “They conspired against me and took bets on how long I would last. They gave me a month.”

She not only beat their predictions, but outlasted most of them, became a success, and has been happily employed as a master certified sales consultant at Marcotte Ford in Holyoke for seven years.

Barbara Spear expected to confront discrimination when she was hired as a salesperson at Balise Lexus because she had encountered it during her previous job as general manager of a construction company. However she didn’t anticipate cynicism from other females, and was shocked by a friend’s response when she told her about her new job.

“She asked me why they would even consider hiring a woman,” Spear said, admitting, “I knew nothing about cars and had never even pumped my own gas when I took this job. But I had spent my whole life in sales, knew I could sell anything, and am a people person who really loves making my customers happy.”

Today, she numbers among an elite group of females who excel in a male-dominated industry. In fact, only 7% of auto salespeople are female, despite the fact that women play a leading role in 85% of auto purchases.

“It’s not an easy job. You have to shovel and brush snow off cars in the winter and deal with the heat in the summer,” Buker said. “You miss out on a lot with your family due to the long hours, but you also gain a lot.”

Those gains include close relationships that females tend to form with customers who share stories about deaths, divorces, illnesses, and family problems with them. There are also financial rewards because it can be a very lucrative career, and these women say they couldn’t imagine doing anything else.

“It gets into your blood,” said Jodi Colter, a sales manager for Fathers & Sons Volkswagen in West Springfield. “I took a two-year break when a family member became ill, but I always return. I like my staff, enjoy coaching people, and love the daily challenge of trying to make sales.” 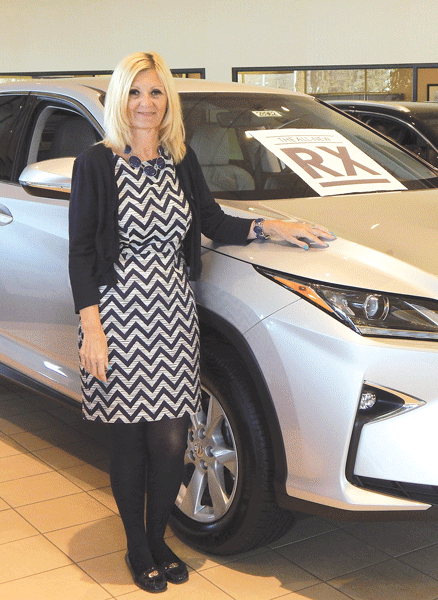 Barbara Spear says selling cars isn’t easy, and doing it well means time spent away from family. But there are many rewards as well.

Spear concurred. “This business is about making new friends and continuing the relationships. I am a workaholic and tend to be here seven days a week to accommodate customers, but I compete against myself and do very well,” she noted.

These women, in other words, are willing to go above and beyond to make prospective buyers happy.

For example, Nieroda had a female client who had her drive two different cars to the graveyard where her father was buried because she felt he would give her a sign as to which vehicle she should purchase.

“I just sat in the car while she got out,” she explained.

Some women find jobs in auto sales by happenstance, while others enter the field dreaming of autonomy and economic sufficiency. But the substantial sacrifices required to travel down such a road cause many to drive away from the futures they projected for themselves.

Colter’s career began after she was hired as a receptionist by Balise Motor Sales in 1996. She took the job to pay for college, and “became enchanted by the sales process” when she worked with the sales team.

Since that time, she has seen many female sales associates come and go, and said one of the toughest obstacles they face is balancing family life with the demands of a job that can require them to work six or seven days a week, plus holidays.

“I have a 4-year-old and a 14-year-old, but I also have a nanny; I’ve seen many single parents quit because of the hours,” she told BusinessWest. “Every mom wants to be home with her kids, and although it’s important to guys, they may be geared a little bit differently. Throughout the history of time, men have always been away from home working.”

But Colter and other saleswomen said that, if their peers are lucky enough to have family to help with children, or choose to make the sacrifices required to perform this work, they quickly discover their innate ability to communicate gives them a subtle — or maybe not-so-subtle — edge over male co-workers.

“When customers see me come out of my office, there is always an element of surprise,” Colter noted. “But then they seem to let their guard down … they joke with me and say, ‘so you’re the boss?’”

She takes such comments in stride. “You have to have a thick skin in this business, and I don’t get the objections some males do when they start to discuss numbers,” she went on. “Seeing a woman’s face can be refreshing, and some female buyers are more comfortable dealing with another woman. And if someone only wants to deal with a man, you can’t take it personally.” 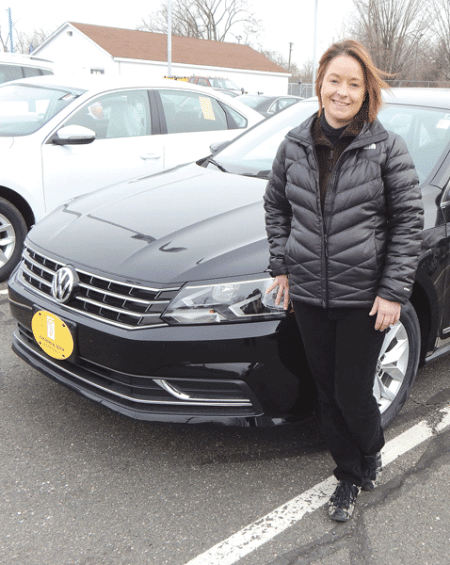 Jodi Colter says selling cars “gets into your blood.”

Buker says things have improved dramatically over the years and agrees that women have an advantage that comes to them naturally: their ability to listen empathetically and form bonds with people quickly.

She recalled one woman who purchased a car, then came back and sat at her desk and sobbed because her husband was very sick and she knew Buker would be sympathetic.

“I interact with my customers as if they are my friends. It’s just how I am,” she said, explaining that she knows many people have felt intimidated by auto salespeople and believe buying a vehicle is a confrontational experience.

She fell into the job after graduating from college and has never regretted it.

“I really love being able to help people,” she said. “Sometimes they don’t know what they want, have a problem with the website, or don’t know whether to repair their vehicle or buy a new one. I give them advice and have taken them into our service department if I feel it’s necessary because I want them to feel comfortable with their decision.”

Indeed, feeling respected is a critical factor in the profession, but saleswomen have heard stories from women about how they were insulted by salesmen.

“Women have told me they felt as if they have been talked down to,” Nieroda said. “But nine times out of 10, the woman in the family is the one who controls the sale. If she feels it’s not a good value, the answer will be ‘no.’”

Still, the stories abound. One woman told Spear she picked out a car, and when she was ready to purchase it, the salesman told her he would not discuss price unless she returned with her husband. Meanwhile, she recalled, another woman sat in the parking lot and sent her husband inside to buy a car until Spear coaxed her out of her car and listened to stories about bad experiences she had had in the past.

“I think women tend to be softer and a little more compassionate when it comes to sales. I tell my customers it’s their money, so it needs to be their decision; there shouldn’t be any pressure,” she said.

The Internet has had a dramatic affect on the way vehicles are sold.

“It has opened up the doors to the world,” Spear said.

But there are pros and cons: dealers lose sales because a car doesn’t have the exact specifications someone is looking for, but gain them if they have it in stock, even when the buyer lives in a distant state.

“I’ve shipped cars to Nigeria, Texas, Washington State, and California,” Spear said, noting that it’s not uncommon for people to purchase a certified auto via the Internet without ever test-driving it because they know it has gone through a 161-point inspection and is under warranty.

However, some still want the experience of seeing the vehicle, sitting in it, or taking it for a test drive, and will drive long distances or fly to the dealership, then make the purchase and drive their new auto home.

However, this can lead to less personal interaction, and although Buker applauds the research people do in advance of a purchase, she misses the ties that are forged when both parties work together to find a vehicle that fits their needs.

Other changes in the industry include the fact that advertising is being geared more toward advances in technology than improvements in the vehicles.

“We used to sell cars, but now we are selling technology — cars that can park themselves, radar that lights up when another automobile is passing, power lifts, and all types of sensors,” Nieroda said.

Buker agrees. “When I was a kid, it was a big thing when a new car was introduced to the market. People would line up in front of a dealership to see it, but today everything is online, and people can find what they want there.”

That includes prices for new vehicles advertised on general websites, which can become problematic because they don’t include docking and destination fees, CARFAX reports, or the cost of certifying a vehicle.

“Some people expect dealers to function without making any profit at all,” Nieroda said, citing another challenge.

She thinks sexism still exists in the auto-sales industry, although it definitely has lessened.

“I sell more trucks than the guys here, but you still don’t see many women in this business, and I imagine some people think I’m an anomaly,” she said. “The industry continues to be dominated by males, but it’s a lucrative field and women are not only smart, we probably have an edge because some people are more comfortable dealing with us. I can’t tell you how wonderful people are; I’ve gotten cards and flowers, and it really is a wonderful feeling to sell to one generation, then the next.”

Colter agrees. “If you love automobiles, this is a great field, and seeing a woman’s face can be refreshing. We’re compassionate and good listeners, so even men drop their guard and talk to us. But you do have to have thick skin, and you can’t take things personally.”

These women have conquered these challenges and others they have faced, and focus on the positive aspects of their business as they navigate the road to success using skills — both natural and honed — to help people purchase the perfect vehicle. 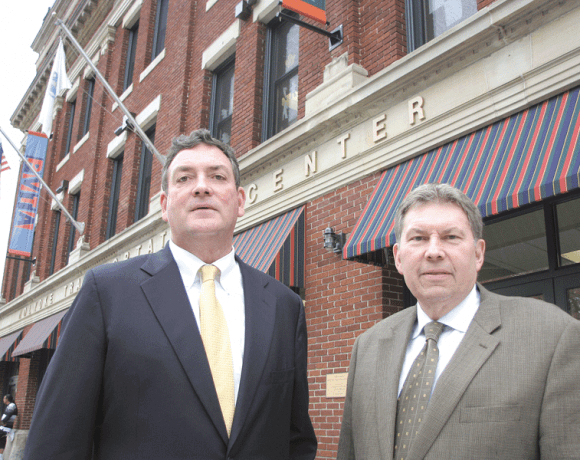