Their Time in the Sun 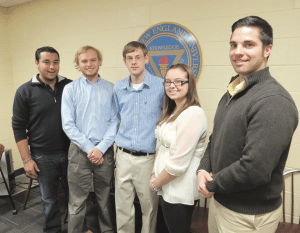 Samuel McLaren was talking about anxiety, a few sleepless nights, 16-hour days, and the pressure of meeting tight deadlines.

And that was just the application process.

There is certain to be much more of all of the above as he and more than 100 other students at Western New England University, which will lead one of 20 teams that prevailed in that application phase, take part in something called the Solar Decathlon.

Over the next 22 months or so, students across a number of disciplines, from environmental engineering to mathematics to mass communications, will design, fund, and build a completely solar-powered, net-zero home, then test it, disassemble it, transport it to Irvine, Calif., where it will compete with those 19 other entries, disassemble it again, and ship it back to Springfield.

“This is an enormous task, obviously,” said Kenneth Lee, professor and chair of Civil and Environmental Engineering at WNEU, who was on hand for the 2013 Solar Decathlon, and pronounced it a working display of energy innovation in action. “It’s going to require teamwork, lots of hard work, and a strong focus on innovation.”

McLaren, a junior who transferred to WNEU from Housatonic Community College, and one of several students on the project’s leadership team, or Engineering Board, or E-Board, agreed.

“It’s already been a lot of work — we worked on this tirelessly last semester, getting our application ready,” he said, adding that those long days and sleepless nights, which extended into the intersession, were obviously worth it.

Indeed, on Feb. 13, the U.S. Dept. of Energy, which stages the decathlon, announced that WNEU and two collaborating partners, Universidad Tecnologica de Panama and Universidad Tecnologica Centroamerica in Honduras, would be competing against the likes of Stanford, Yale, California Polytechnic State University, Vanderbilt, and many other top schools, in this country and abroad.

The winning team will receive a cash prize, said Lee, adding quickly that the more important rewards — which will go to all of the more than 2,000 contestants — include the experience of working with others to plan and execute the project, and also working on the cutting edge of innovation in energy efficiency.

The biannual event is called a decathlon because, as the name suggests, there are 10 contests within the larger competition. Teams will be judged on architecture, market appeal, engineering, communication, and affordability — components that will be juried — as well as ‘comfort zone,’ hot water, appliances, home entertainment, and energy balance, which will be measured (home entertainment will also be juried).

For this issue and its focus on environment and engineering, BusinessWest talked with Lee and several of the students who will be leading WNEU’s participation. They all described it as a unique opportunity to take what is being taught in the classroom and put it to work in a real world that is searching for ways to become more energy-efficient.

The scope of the Solar Decathlon became clear at a meeting involving many of the students who will participate.

The auditorium on the ground floor was packed with more than 100 students across a number of disciplines. More than a dozen would move to the front of the room to discuss specific aspects of the project that they would lead, and essentially recruit members for those teams.

These specific assignments ranged from planning and design to public relations; from interior design (led by a young woman who admitted she knew nothing about engineering, but didn’t need to) to fund-raising and soliciting sponsors.

And Lee summed up the principle that will drive each of these tasks, but especially the design phase, when he told those assembled, “we need innovation, innovation, innovation. We’re going to have to separate our house from everyone else’s, and the only way to do that is to apply innovation to everything we do.

Innovation has been the watchword since the Solar Decathlon was first staged in 2002. Since then, a total of 192 teams and nearly 17,000 students, representing 33 countries, have taken part.

Those numbers will increase with the 2015 competition, which will include eight returning teams and 12 new squads; four of the teams will have partners from international schools. The field looks this this:

• Missouri University of Science and Technology;

• University of Texas at Austin and Technische Universitaet Muenchen;

Those teams will looking to duplicate the success of Norwich University in Vermont, which took home the Byron Stafford Award of Distinction (named after one of the event’s original organizers, who passed away last year) for something called the Delta T-90 House, which, according to last year’s program guide, “is guided by the beliefs that high-performance, solar-powered dwellings should be available to all and that good design is not a function of cost.”

At present, the WNEU team’s entry doesn’t have a name, a design, or even a budget, said Tiffany Behuniak, a sophomore studying civil and environmental engineering and project engineer for the decathlon bid, noting that these pieces to the puzzle will fall into place over the next several months.

She conjectured that the WNEU team’s application struck a chord with those reviewing the entries because of the international partners, the fact that the school had committed $24,000 to the project and raised another $26,000, and other tangibles and intangibles.

And since word came from the Department of Energy that WNEU’s team had been chosen to compete, the process of filling out that team and assigning work has commenced with the necessary degree of urgency.

“We’re getting all of members together and splitting people into groups based on what they want to work on,” Behuniak explained. “And then we’re going to start all of our training and design work, getting more sponsorships and doing more fund-raising. There is a lot going on all at once.”

Students at the partnering international schools will be working with those at WNEU on individual projects, mostly via skype, said Lee, adding that, when the endeavor reaches its final stages, some of these students will come to the Springfield campus for actual hands-on involvement.

Adison Vanina, a sophomore electrical engineering major and project manager for the decathlon bid, said that, for all those involved, this will be experiential learning of the highest order, and an invaluable experience that could help open doors to careers in the green-energy field.

“When Dr. Lee first introduced this to us, it seemed like a great opportunity to build our experience in engineering,” he said, “and also take what we’ve learned in the classroom and put it to practical use, while also working in a team environment.”

While many of the aspects of the project involve science, architecture, and engineering, there are other components that make it a truly campus-wide initiative, said Lee.

He cited, for example, the communications segment within the decathlon. In that competition, a jury of communications professionals evaluates Web content, an audio-visual presentation and information, the quality of on-site graphics, the delivery of messages to target audiences, and the use of innovative (there’s that word again) methods to engage audiences.

And then, there’s the fund-raising aspect to the project, which, while it is not scored as part of the actual competition, is obviously vital to its success. The Department of Energy provides some funding, as does the university, said Lee, but the team must pound the pavement and be creative to cover the full cost of building the home (projected to be $250,000 or more) and also additional expenses, especially those involving getting the house — and the students who built it — to California and back.

All those we spoke with said this project is at its very earliest stages and there are many unknowns ahead, which is one of the more intriguing aspects of this effort.

What is known is that there will be many more of those long days and possibly sleepless nights in the months to come.

Whether the WNEU team can take the top prize in the 2015 competition remains to seen, but one thing is clear: this will be a well-earned day in the sun for all those involved.