Trees serve both practical and aesthetic functions, and people can become quite attached to them. But work to maintain, trim, and even remove trees should be left to the professionals, who say their profession is often dangerous, but in all ways rewarding.

Joseph Alexopoulos has given many customers quotes for taking down a tree. But he will never forget the day he arrived at a house, saw a rope hanging from the tree the homeowner wanted removed, and asked about it.

“I was told the man they hired before me died trying to fell it,” said the president of Tree 413 in Longmeadow, adding that the tragedy is an example of how dangerous the work can be.

Local experts agree it’s critically important to hire professionals with the knowledge, training, proper equipment, and insurance to prevent homeowners from being sued if an accident occurs on their property.

The Tree Care Industry Assoc. says successfully felling a tree requires knowledge of tree physics, biology, dangerous tools, and advanced cutting techniques, and homeowners who attempt their own tree removal may be injured by falling limbs, malfunctioning equipment, or the tree itself.

The work is hazardous by nature, and professionals are completely outfitted in protective gear and trained to climb trees, operate cranes, and use chainsaws, ropes, wood chippers, and stump grinders safely.

Manager Randy Sample of Arbortech Tree Service LLC in Springfield says the company holds weekly meetings led by employees to discuss situations they encounter and the safest way to deal with them.

“Unforeseen scenarios can occur, but we go to great lengths to eliminate the possibility of accidents,” he said, adding that employees use a wide range of equipment, adhere to OSHA standards, and are certified annually in electrical hazard and prevention, which ensures they are familiar with equipment utility companies use to provide electricity and the dangers associated with tree care and utility lines.

Tree pruning and felling is a major source of income for most local tree-service companies, but many have branched out, and the scope of their work includes a wide variety of jobs. 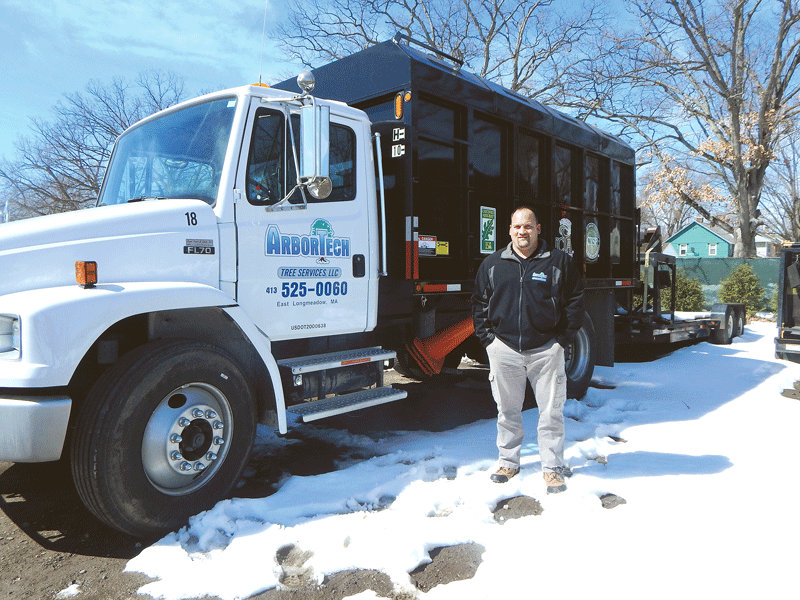 “By the time they are noticeable, it may be too late to save the tree,” Sample said, adding that he has heard countless stories from families about their emotional attachment to a particular tree, and, therefore, the company strives to prevent damage that can threaten the health of these woody plants.

Tree 413, meanwhile, specializes in difficult tree removal that typically requires cranes, special equipment, and skilled climbers. “Many trees literally need to be lifted over the house with a crane as a whole or in pieces; it’s not a job where you can cut corners,” said Alexopoulos, adding that the company’s business has doubled every year for the last three years and workers do everything possible to ensure that limbs don’t fall on a roof, power line, vehicle, or anywhere else that could cause damage.

The company also does excavation and demolition, plans to start selling colored mulch, and recently opened a store in Southwick that carries equipment for professionals and homeowners that can be rented or purchased. It ranges from heavy-duty machinery to chainsaws and leaf blowers and includes clothing appropriate for tree work, because professionals are outfitted from head to toe to ensure safety.

Northern Tree Service Inc. in Palmer does a wide range of residential, industrial, and commercial work in three divisions that include tree service, land clearing, and construction. Its work ranges from felling trees to identifying potential hazards such as overhanging branches, dead limbs, or diseased trees for municipalities, golf courses, and other venues, as well as providing access for utilities.

For this issue and its focus on landscape design, BusinessWest looks at the scope of work that tree service companies do and the reasons they are called upon for help.

Local tree-service companies say homeowners should never hire anyone without asking for proof they have liability and workers’ compensation insurance. 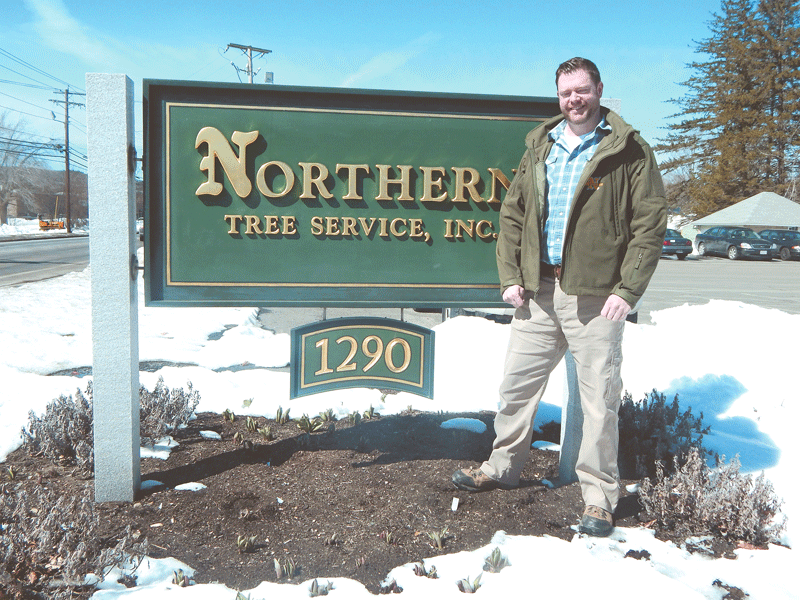 Nick Powers says Northern identifies problems like weak limbs for its clients before they cause damage or injury.

“Many small contractors let their insurance lapse, so even if the person hands you a copy of a policy, you should call the phone number on it to ensure they are paid up to date,” Alexopoulos told BusinessWest.

Sample concurred. “People need to do their homework; the level of danger is very real, and there are many companies that are not qualified to do this type of work,” he said, adding that homeowners should also ask for referrals, make sure the company adheres to industry standards, and check if its arborists are certified through websites such as www.treesaregood.com, which offer educational materials and links to helpful information.

In addition to tree trimming and removal, Tree 413 performs excavation and demolition ranging from removing a sidewalk to an entire garage and foundation, or a Gunite pool made entirely of concrete. When the demolition is complete, workers fill in the cavity, spread topsoil over it, then seed it.

The company recently took down three trees for a homeowner in a project that was similar to a major demolition project, because they weighed a total of 60,000 pounds.

“The job was very involved and required skilled tree climbers, a crane, and a police officer in the road near our groundsmen who were cutting and chipping sections and putting logs in a truck to be taken away,” Alexopoulos said.

He added that dead trees are very difficult to take down, and the job often has to be done in sections. “If a cut branch slams into a dead tree, it can shatter,” he explained, noting that a small limb can weigh 600 pounds.

Arbortech also does a large amount of residential work, but its slogan is “more than just tree removal.” The company employs certified arborists who evaluate trees, shrubs, and woody plants and diagnose and treat disease, insect problems, and the type and amount of fertilizer needed for optimal growth.

“We try to care for trees from the roots up; we focus on tree preservation rather than removal,” Sample said, adding that indications that a tree is in trouble include problems such as leaves that fall too early.

He told BusinessWest that most problems stem from improper planting. Trees can be too close to a driveway, home, or power line, and choosing the right location for a specific species and its future growth is critical.

“The root system is the foundation of a tree and is typically as large as its crown or the drip line from the farthest branch,” Sample said.

The company’s arborists uncover roots, which are usually buried a foot or two beneath the ground, take soil samples, and inspect the root collar to make sure roots aren’t choking each other, which can affect the nutrients the tree is able to absorb.

Arbortech also plants trees and maintains orchards for customers that include apple, pear, and peach trees, as well as raspberry and blueberry bushes.

In addition, it sells mulch, loam, topsoil, and both green and 100% seasoned firewood.

“It can be a frustrating endeavor to buy firewood that is dirty, not properly seasoned, and doesn’t give the heat people are looking for,” Sample said, noting that the company purchases wood from logging contractors that has been specially cut to fit their machines, tests it with a moisture meter, rotates it so it will dry properly, then puts it through another screening process after it is purchased to ensure the delivered product doesn’t include any loose bark or chunks of wood.

Northern Tree Services performs jobs in many settings. It builds roads and work pads for utility companies, and has cleared sections of land that range from a half-acre to 550 acres to make way for power lines, solar fields, gas and oil pipelines — including the Keystone Pipeline — and large commercial contractors.

The company has 220 employees across the U.S., but the majority of its work is done in New England, and it also has contracts with colleges, golf courses, apartment and condominium complexes, 40 airports, the cities of Springfield and Boston, the Massachusetts Bay Transportation Authority, the state Department of Transportation, and Eversource. It has also developed a Google Earth program to identify trees that need to be pruned, thinned, or felled.

“It’s our job to identify hazards before they happen,” said company spokesman Nick Powers, noting that Northern also has a contract with the state Department of Conservation and Recreation, which is responsible for monitoring and maintaining vegetation on its roads, including the well-traveled Storrow Drive in Boston.

The company also does residential and commercial plantings and tree removal and pruning, which is especially important for utility companies because falling limbs can cause power outages.

Kevin Ferguson, project manager and estimator, told BusinessWest that arborists identify weak limbs that need to be supported or removed so they don’t fall during a windstorm or from the weight of snow.

“It doesn’t take much wind to knock deadwood out of a tree,” he said, explaining that, when they are called to a home, they examine the entire property and point out potential dangers. Some trees can be thinned to eliminate shade and the growth of moss on a roof, while helping prevent gutters from getting clogged with leaves, while others need low-hanging or dead limbs removed.

Local tree companies do everything in their power to prevent accidents, but tree work is a risky business and can lead to damage or injury when unqualified people are hired to do a job.

It all comes down to respecting the power of nature and checking a company’s credentials, but anyone who hires licensed professionals to plant, prune, or fell trees can rest assured that every possible safety precaution will be taken, and their trees will add beauty and life to their property and be enjoyed by generations to come. 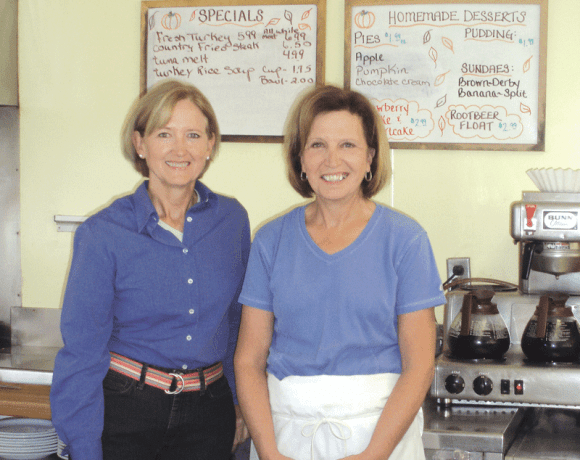