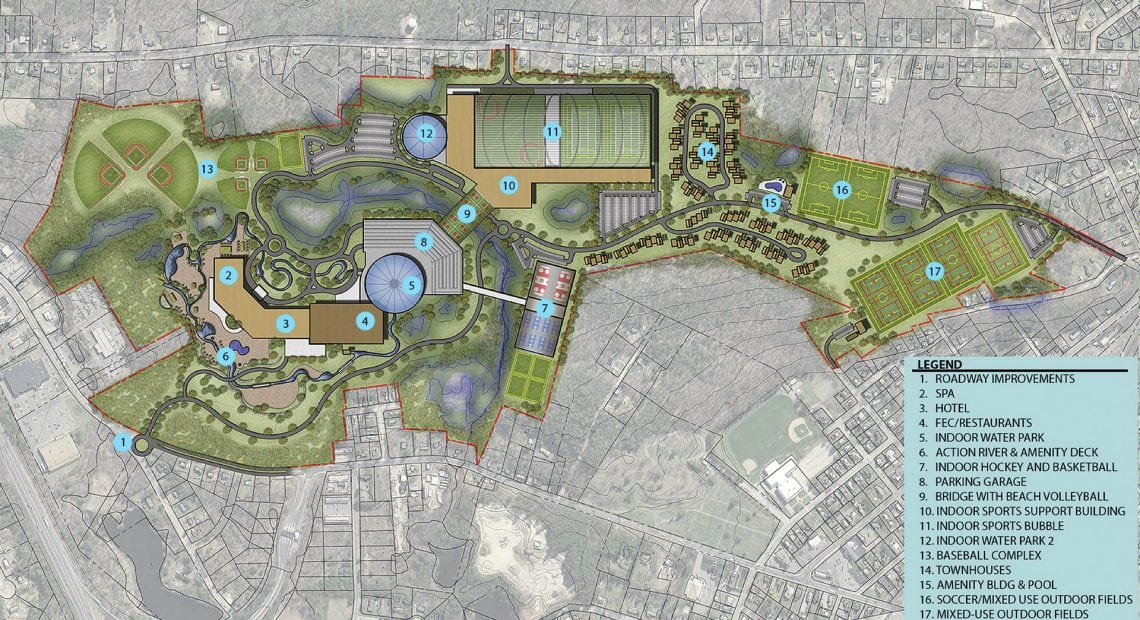 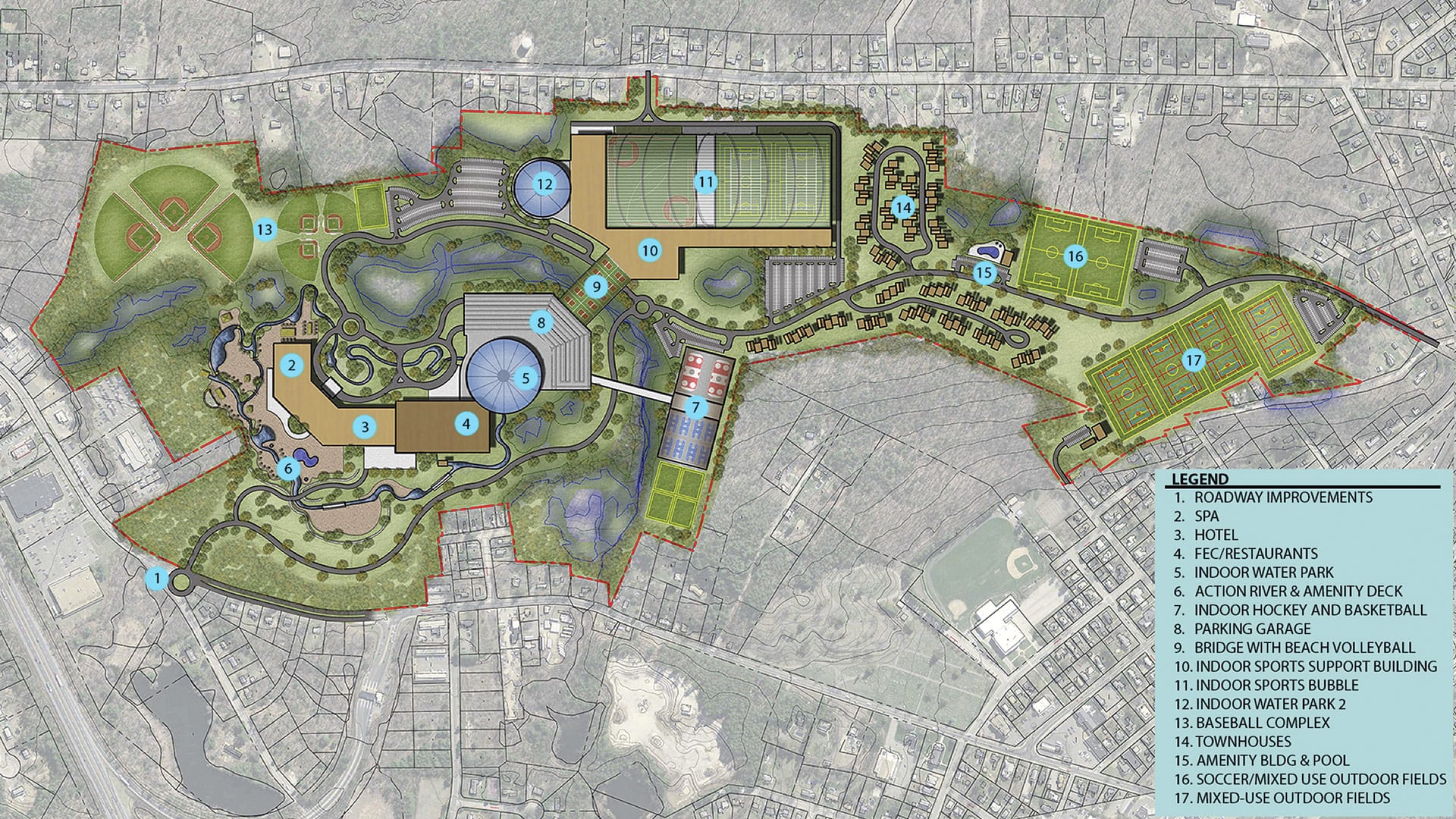 This rendering shows the many components of the planned $650 million resort and water park in Palmer.

More than five years after Palmer residents rejected a casino proposal for a huge tract of land just off Turnpike exit 8, the property is back in the news, this time as the planned site of a $650 million water park, resort spa, and sports complex.

It’s the most basic tenet in commercial real estate.

Since the Massachusetts Turnpike opened in 1957, the large tract of land sitting atop the hill overlooking the exit 8 ramp in Palmer has always possessed that coveted quality. But over the ensuing 60-plus years, little has been done to capitalize on it.

Indeed, among the more than 20 exits on the Pike, exit 8 is arguably the least developed. There’s a small gas station and attached convenience store just off the exit ramp, but one has to go a half mile left or right to find much commercial development, and even then there isn’t much.

Still, Northeast Development saw the enormous potential in the property more than 20 years ago, and first obtained an option on more than 200 acres owned by the late John Lizak — who owned several properties within the town — and later acquired it outright soon after casino-gambling legislation was passed in the Commonwealth.

An opportunity to place a casino, proposed by the owners of Mohegan Sun, at the site went by the boards in 2013, when Palmer residents rejected a casino referendum, but now the property is the focus of another high-profile initiative — one on almost the same scale as the MGM casino eventually placed in the South End of Springfield.

“I remember being at a meeting with them and hearing them say, ‘this is a hot idea — irrespective of the casino, water parks are hot commodities if they’re done right.’”

And, ironically, it’s a concept that actually became part of the rejected casino proposal — a water park.

Or a water park on a much, much larger scale, to be more specific. This would be a $650 million water park resort and spa, featuring everything from a man-made tubing river (if constructed as planned, it would be the longest in the country) to batting cages to athletic fields.

“As the casino competition started heating up, everyone was putting something new into what they were doing,” said Paul Robbins, president of Paul Robbins Assoc., a Wilbraham-based marketing and public-relations firm and spokesperson for the Palmer Sports Group. His firm has also represented Northeast Development for many years. “Doug Flutie was going to be part of Ameristar [one of the casinos proposed for Springfield], and MGM was touting its entertainment. That’s also when Mohegan introduced the concept of a water park.

“And I remember being at a meeting with them, and hearing them say, ‘this is a hot idea — irrespective of the casino, water parks are hot commodities if they’re done right.’”

Those at Palmer Sports Group obviously feel the same way.

Led by Winthop ‘Trip’ Knox, who has been involved with the design and construction of more than 3,000 water-related facilities for water parks, resorts, and deluxe hotels, and Michael D’Amato, who managed the construction of the later stages of the Foxwoods Resort Casino, including the Grand Pequot Tower, the group is thinking big.

As in very big.

There is demand for all of the above, said Robbins, adding that there isn’t anything like this in the Northeast, and the developers expect to draw visitors from a 300-mile radius and do so for at least 10 months out of the year; yes, the water in the tubing river will be heated.

“The developers believe there are 25 million people in the catchment area for this facility,” said Robbins, who used the phrases ‘Disney-esque’ and ‘think Orlando’ a number of times as he talked about just what is being proposed for the Palmer site.

Elaborating, he said there will be a large water park attached to the resort complex (again, like the Disney parks) that become part of the package of staying at that facility. There will also be second water park for day trippers, as well as a host of other facilities.

Robbins said the Palmer site, while somewhat remote (which explains the lack of development at and around the exit 8 interchange), lies roughly halfway between Springfield and Worcester and is easily accessible to several major population centers. And that has made it a hot property, as they say in this business, for some time.

“When Mohegan signed on, I had a number of meetings with them, and they absolutely loved that site,” said Robbins. “They loved it because [then-Gov.] Deval Patrick said he wasn’t thrilled about casinos going to urban areas; his vision was for a bucolic, ‘drive to the destination, stay a few nights’ type of resort, and that’s what Mohegan is. But the location is also ideal.”

So much so that Northeast pursued a number of different development opportunities for the site, but eventually returned to the concept that grew out of the casino proposal and may eventually replace it as Palmer biggest hope to replace the many manufacturing jobs that were lost there over the past few decades and bring new vibrancy to the community.

Preliminary estimates call for 2,000 jobs, said Robbins, adding that the project might well become a synergistic complement to the recently opened MGM Springfield, offering people from outside the region more reason to come to the Bay State, and specifically Western Mass., for an extended stay.

At present, there is no timetable for the development, said Robbins, adding that the Palmer Sports Group is working with town officials to secure the necessary approvals and make the project a reality.