Schley Warren, left, general manager of Berkshire Service Experts, says Ed Collins, who came to the company via Human Resources Unlimited, has been a tremendous asset.

He was at that Springfield location several months ago overseeing some work to its HVAC system as part of his work as general manager of Berkshire Service Experts. “I asked the people, ‘so . . . what do you do here?’”

The answer intrigued him enough to eventually become both a vendor and a client, although the preferred term is ‘business partner.’

Lighthouse is one of HRU’s four so-called clubhouses, facilities that provide a variety of rehabilitation services to adults with mental illnesses ranging from depression to schizophrenia. One of those services involves transitioning individuals into the workforce through skill building and then matching people with positions at area companies.

After watching and learning about Lighthouse, Warren, who had long been looking to add a receptionist to cover lunch hours, decided to make Berkshire one of those companies.

Today, Ed Collins works at the front desk of Berkshire’s offices on Capital Drive in West Springfield. There, he handles the phones, greets visitors, and even works on spread sheets. Warren describes him as a real asset to the company, someone he’ll certainly miss when Collins moves on in a few months.

His assignment is temporary in nature (six to nine months is the norm) and while there is more than a touch of regret on Warren’s part about this fact, there is also a realization that moving on is better for Collins — “he’s underutilized here … there’s bigger and better things waiting for him out there” — and for HRU. That’s because the position at Berkshire isn’t really given to an individual; it’s given, in essence, to the agency, which will hopefully assign a succession of individuals to it, giving them additional skills and work experience that will enable them to land permanent jobs.

“Meaningful work is an integral aspect of an individual’s sense of purpose and well-being,” said Margaret Jordan, HRU’s director of Mental Health Services, who told BusinessWest that for individuals helped by HRU, joining the workforce is an important part of their recovery.

“Individuals with mental illness have been told that they shouldn’t be working, and should instead just collect services,” she continued. “We don’t believe that.”
Those involved with HRU, called ‘members,’ now occupy a number of positions, ranging from receptionist to software support, and for companies ranging from what are (or were) one-person shows to large corporations like Big Y and CVS.

Business partners can earn $2,400 Work Opportunity tax credits for each position they designate for HRU, Jordan explained, but this is rarely, if ever, the motivation. Instead, it’s a simple desire to bring on skilled, dependable workers (something that is becoming increasingly difficult in this labor market), while also giving those individuals a much-needed opportunity to be productive, earn wages, and, most importantly, gain confidence in themselves.

“They’re not just doing good,” Jordan said of the companies that have become partners. “They’re doing well. In many ways, they’re helping their businesses.”

Looking forward, Jordan said HRU would like to add more business partners, an expansion effort that would help more individuals with mental disorders, while helping to address the challenge of finding good help. Such growth for the program will come through awareness, she continued, adding that business owners should consider HRU’s ability to solve their workforce problems.

Jeff Lander is another of those business owners who discovered HRU largely by accident.

His relationship started in 1999, when he bought a home on Broad Street in Westfield — in which he set up his software development business called Appilistic — located next door to another HRU facility known as Forum House. Curiosity prompted him to learn about the work being done at that facility, while intrigue compelled him to first volunteer, then become a member of the group’s board of advisers, and then lead that board.

And it was common sense that made him a business partner.

An administrator at Forum House approached him about an individual she thought would be a good support person for Appilistic. Talk eventually led to the hiring of Mike Santner, who now handles a variety of tasks, including HTML coding, thus allowing Lander more time for initiatives that will help grow his business.

“His skills complement mine nicely,” said Lander, who said his experience with Santner has worked out so well that he has created another position, largely along the lines of an administrative assistant, that is also staffed through HRU. “He’s a great addition; he’s very good at what he does.”

For his commitment to HRU and its programs, Lander was recently named the organization’s employer of the year, one of several awards given annually to recognize the companies that help HRU carry out its mission of community integration. This partnership with the business community began in 1970, said Jordan, when now Springfield-based HRU was founded.

Originally, the agency was affiliated with Belchertown State School and its vocational program, she explained, adding that it broke away from the school and relocated to Springfield in 1985. HRU, with a $7 million annual budget funded by the State Dept. of Mental Health, has a number of component parts. They include ETS Career Services, a Springfield-based facility that places developmentally disabled individuals for contract and assembly work, and the Pyramid Program, which conducts skill-building for individuals with severe developmental disabilities and, more commonly, physical disabilities. There are other programs to help those on transitional assistance enter the workforce and offer services that enable homeless individuals get back on their feet.

The Mental Health Services Division now operates four clubhouses — Lighthouse, Forum House, the Star Light Center in Florence, and Tradewinds in Southbridge — that function to provide individuals with work skills and then match them with transitional and, hopefully, permanent employment opportunities.

The basic mission for the clubhouses is to challenge program members to rise to their full potential through skill-building and work, Jordan explained. “The program was founded on the belief that members have the right to be connected to their community, to make their own choices, pursue personal goals, and have the opportunity to work.”

The clubhouses assist individuals with an array of mental illnesses, she continued, including severe depression, bi-polar disorder, schizophrenia, and personality disorders.

For employers, the clubhouses act in many ways like staffing agencies. The work begins with assessing specific employment needs and continues with efforts to match job requirements with members, said Jordan. Clubhouse administrators actually take on a position initially, to understand its nuances and properly train members to assume it. The clubhouse provides what it calls an absence-coverage guarantee, meaning that if, for any reason, the employee cannot show up for work, another, already trained, clubhouse member or administrator will fill in.

But while the job titles vary, the opportunities are largely the same, said Jordan, adding that individuals are given a chance to build a track record as a responsible, dependable, and efficient employee, which could lead to permanent employment within the area.

The process starts with transitional employment assignments, like the one Ed Collins is on at Berkshire. In two months, he will move onto another transitional position, gaining more skills and confidence as he does so. In some cases, transitional work will lead to permanent jobs at a company, although this means that HRU loses the position in question — unless it convinces the employer to create another job for the agency, which often happens.

Such was the case at Appilistic, where Lander thought Santner was such a good addition he asked him to stay on with the company.

Transitional jobs have also led to a number of permanent positions at Big Y stores, including the one on East Silver Street in Westfield, which has a long-standing relationship with Forum House.

John Mountain, the store’s manager, told BusinessWest that the facility now has six employees, all “service clerks” who handle duties ranging from bagging groceries to corralling shopping carts, who came to the company from Forum House. Many have been with the store for years, he said, adding that a few that he hired before a four-year assignment with another store before returning to Westfield to become manager are still there.

“This has worked out very well for us; all the employees are very dependable,” he said, adding that when the store has openings, Forum House members are always an option to be considered just like other candidates.

Like other business partners, Warren said there are many advantages to awarding a position to HRU. The post is consistently staffed with reliable individuals who don’t have to be trained by Berkshire, he explained, adding that the alternative — trying to find someone who will stay in such an entry-level, part-time position for any length of time — is not very attractive. He’s now mulling other positions, such as sheet metal fabrication, that could be given to HRU and Lighthouse.

Warren’s not looking forward to seeing Collins leave Berkshire early next year, but he is excited about the prospects of helping other individuals gain work experience.

“It really is a win-win,” he explained. “We win because our company’s is better because we have people like Ed here, and Ed wins because he’s learning and growing.”

As he talked about HRU and Forum House, Lander stressed repeatedly that his involvement is not simply doing good deeds.

“This is a resource that helps me run my business more efficiently,” he said, referring to Forum House as his HR department. “It helps in unexpected ways — they want to help my business succeed.

Similarly, the programs help members to succeed — in whatever ways they define that word.

“We help people set their own goals and help them dream,” Jordan explained. “Sometimes, mental illness interferes with dreams; it shouldn’t keep them from coming true.” 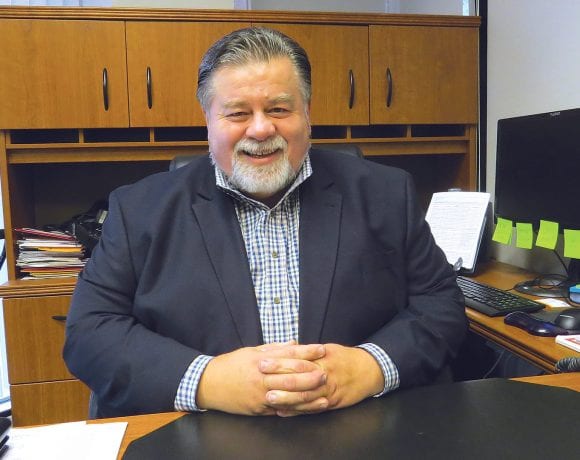