A Decade of Change 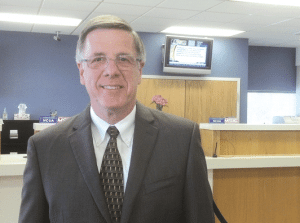 Barry Crosby says it’s important for Freedom Credit Union to have a strong presence both on the street corner and online.

In the past decade, Freedom Credit Union has expanded its footprint from just one branch to 10, with another on the way. But Barry Crosby is especially excited about the branch with no street address.
“Online banking is our busiest branch; it gets the most volume,” said Crosby, the institution’s president and CEO. “We firmly believe we need bricks and mortar in strategic locations to have visibility in the community and be involved in the community, but clearly, the online branch network is huge for us as well. We have to recognize — and we do recognize — that technology is so important to the younger generations, and we’ve reached out to meet their needs.”
Indeed, while many financial institutions continue to expand their bricks-and-mortar footprint across the region — and Freedom is no exception — industry leaders increasingly say that computers and smartphones are now the primary banking tools for a generation of younger customers, and many older ones as well.
“They’re buying everything online,” Crosby said. “Many of the younger generation are not inclined to go to bricks and mortar, be it for financial services or purchasing other kinds of products. They’re buying online and having it delivered to them directly. So we’ve had to change as well.”
As a result, more than 7,000 members now utilize the online banking platform [email protected] to manage their accounts and pay bills. Meanwhile, Freedom recently launched two new services — mobile banking and online account opening — to assist customers who prefer to bank on the go. The credit union has also developed mobile apps for both iPhone and Android devices so members can view their account activity, transfer funds, and find branch and ATM locations on their phones.
“My kids have smartphones; they’ve grown up with technology,” noted William Russo-Appel, Freedom’s marketing officer. “For me, computers just came on board when I was in high school. But today, more and more smartphones are being utilized. Our members are on their smartphones a lot. We need to be there too, and now we are.”
It’s another sign — and there are many — that Freedom is in a serious growth pattern, as reflected in its branch expansion, its recognition by the U.S. Small Business Administration (SBA) as a top regional lender, and its educational and cultural outreaches into the communities it calls home.
Through it all, Crosby said, “our culture — the credit-union culture — has always been to serve all our members for all of their financial needs, be they small, medium, or large. We’ve never lost sight of those roots.”

Approaching a Century
Those roots originate in 1922, when Freedom Credit Union was chartered as the Western Mass. Telephone Workers Credit Union. From a small office in the telephone company building on Worthington Street in Springfield, the institution grew until it had to find a new, larger home on Main Street.
As a result of telephone-company downsizing and reorganization, the credit union eventually expanded to include select employee groups. But growth was incremental until January 2001, when the institution applied for a community charter, and membership eligibility was expanded to include anyone who lives or works in Hampden, Hampshire, Franklin, or Berkshire county. In January 2004, around the time Crosby took over as president, the membership voted to change the name to Freedom Credit Union.
“At that time, we began a roughly 10-year strategic plan for growth,” he told BusinessWest. “At that time, there was just one office and 38 employees, but the board had a plan to better serve existing members and develop new membership through a branch network, and over the course of the last nine years, we established eight additional branches,” with a ninth coming on this fall at Putnam Academy in Springfield.
The credit union’s Northampton branch came about through a merger with Franklin Hampshire Building Trades Credit Union in May 2004, followed by the opening of a Chicopee branch that November. The following year, a merger with Four Rivers Federal Credit Union brought Freedom offices to South Deerfield and Turners Falls.
Two more branches — in Greenfield and Feeding Hills — opened in 2009, and expansion to Easthampton followed in 2010. A year later, a second Springfield branch opened in Sixteen Acres, and 2012 saw the tenth site open in Ludlow.
These days, Crosby noted, Freedom boasts about 155 employees in Hampden, Hampshire, and Franklin counties, and membership has grown in the past 10 years from roughly 16,000 to around 26,000.
“As we’ve expanded the membership base during that period, we started adding new products and services, including member business loans four years ago,” he explained. “We began the process with the focus on serving existing members who might have small businesses, as well as other small businesses in the Pioneer Valley, and we’ve been very successful.”
Two and a half years ago, the bank brought on Gary Grodzicki as vice president and chief lending officer. “He has overseen the growth of the commercial department from a couple million to approximately $20 million,” Crosby said. “We’ve served a lot of small businesses that have really had a difficult time obtaining financing at some of the larger national banking organizations.”
That success has not gone unnoticed. Last year, Freedom was recognized as the top SBA lender in Western Mass. after approving seven loans worth $2.8 million. “The award was a wonderful accomplishment for us because the award category included all financial institutions in Western Mass.,” he said, noting that more than 40 banks and credit unions were eligible for the award. “The fact that Freedom topped the list is a tremendous achievement for us.
“So we’re definitely seeing growth there,” Crosby added. “In addition, on the lending side, we’ve really expanded our automobile loan portfolio. We’re finding today that a lot of financial institutions don’t offer as competitive a rate or products as we do.”

CUPs Runneth Over
Grodzinski said customer service has always been at the heart of how Freedom operates, and that includes striving to identify additional products or services customers could use. “Members are appreciative of that.”
For instance, Freedom offers a program called CUPs, or Credit Union Partners, through which it provides local businesses and organizations a no-cost benefit package for their employees and retirees, which includes special promotions for checking and savings accounts and several types of loans. To date, more than 175 entities throughout the Pioneer Valley have signed up for the program.
As a growing credit union, Freedom places high value on community involvement, from its donation last year of $45,000 to local nonprofits to its promotion of volunteerism among employees.
But civic responsibility goes beyond donations of money and time, Crosby said, noting that Freedom has increased its focus on educating area youth on the importance of saving money, budgeting, and credit. Fifteen schools from Greenfield to Springfield participate in the institution’s youth-banking and financial-literacy programs.
“We’re looking for the next generation of credit-union members,” he noted, “and it’s important that we assist the schools in any way we can in educating students about real-life finances.”
For each elementary school in the youth-banking program, employees visit schools to accept deposits, review monthly statements, and explain the fundamentals of saving. Meanwhile, high-school students learn about financial-literacy topics such as the importance of maintaining good credit and the process of getting a car loan. Freedom also participates in area Credit for Life financial-literacy fairs — a collaborative effort with other institutions — that teach teens about budgeting and making life decisions with their finances.
“We firmly believe in this,” he said of Freedom’s community involvement and educational programs. “The bottom line is, we enjoy meeting with residents and workers in the Pioneer Valley and hearing what their financial needs are, and we try to accommodate them. We can’t do everything for everyone — nor can anyone else — but we certainly listen.”
Meanwhile, the credit union continues to work on a 10-year strategy that takes into account the shifting demographics of the region. For example, Crosby noted, Springfield is 38% Hispanic, and Holyoke 48% — and the numbers are larger in the school systems. So he’s looking to target the needs of those communities, including preparing Spanish-language financial-literacy articles in regional Latino publications as well as targeted messaging on TV and radio. “As a credit union, we need to serve all of our community.”
To that end, Freedom has employees who speak Spanish, Russian, Lithuanian, Portuguese, Greek, and Polish. “We have members who come to us because of our diversity, and our employees are as diverse as the credit union’s membership.”

Lessons from the Past
And Crosby knows, from first-hand experience, that everyone can reach their financial goals.
“One hundred years ago, my maternal grandparents came to the U.S. and didn’t speak English,” he said. “My mother was born here, and when she went to first grade, she couldn’t speak English, because the Slavic language was spoken at home. Yet, in their lifetime, she ended up being a homeowner and a professional. And the next generation — I’m president of a financial institution, and my sister has a Ph.D.”
The lesson? It’s that Freedom, he said, has to look to the future while taking lessons from centuries past, when people from different cultures and backgrounds came to Massachusetts from Europe to man the mills and managed to build lives and legacies.
“We need to look at the next generation coming to America — how do we serve them, but also their children and their grandchildren, the generations to follow? Let’s not only look forward, but backward as well. That’s how we got where we are today.”