Business Is Heating Up 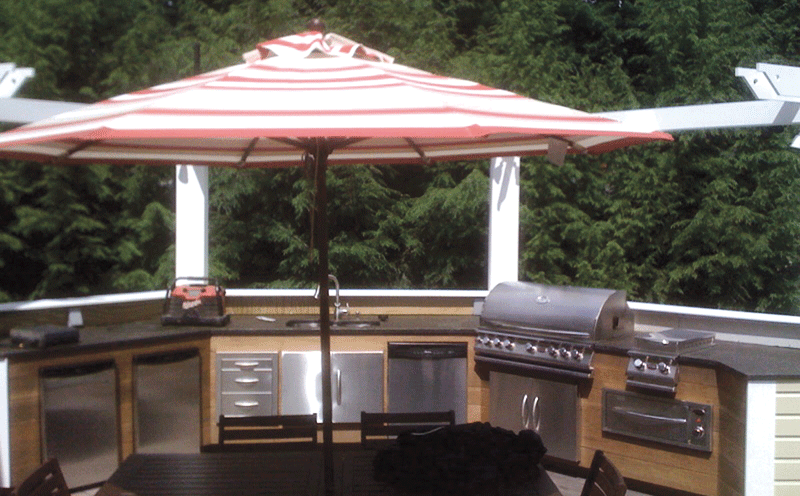 Brian Campedelli says built-in kitchen appliances like these are often just the starting point for a backyard project.

For American families on the go, Brian Campedelli says, home should be an oasis from workplace stress and the general bustle of life.

“I think they’re looking for a general sense of relaxation in their yard. When they get home from work, they tend to be stressed out, and they want to kick their shoes off, throw on some flip-flops, head to their backyard resort, and forget about things for a while,” said the owner of Pioneer Landscapes in Easthampton, explaining why outdoor kitchens and living spaces are becoming more popular, and elaborate, in the Northeast.

“Some people are doing it because they want to entertain,” he added. “Some do pool installs and include an overhang [off the house] and fireplaces … a whole backyard development,” he went on. “They’re looking for a resort lifestyle, where they don’t have to go anywhere except their own backyard to get that feeling. It’s pretty nice.”

Outdoor kitchens — which can include anything from a simple built-in grill to expansive cooking surfaces, refrigeration, plumbing, audio-visual hookups, and more — are at or near the top of most lists of hot landscaping trends, along with firepits, water features, and architectural lighting, even in a region where people don’t want to spend much time outside for several months a year, the current mild winter notwithstanding.

“It’s definitely a growing industry, and it’s more than outdoor kitchens — it’s backyard living,” said Jason Harrington, manager of Ondrick Natural Earth in Chicopee. “Not only are people doing kitchens, they’re doing firepits, fireplaces, pizza ovens … basically a complete package of entertainment in the backyard. We’ve seen a real increase of these things in the past five years.”

He, like others BusinessWest spoke with, agreed the Northeast has lagged somewhat behind other regions of the country, particularly warmer climes, in expansive outdoor living spaces, he added, but that’s changing.

“People are focusing on their backyards in general; they’re creating a getaway in the backyard. Instead of going on vacation, they’re taking that money and putting it into a pool and patio space and creating a vacation feel in the backyard.” 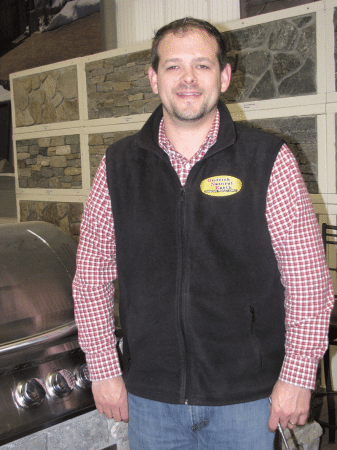 Jason Harrington says homeowners are increasingly seeking a resort-type feel in their backyards.

According to the Hearth, Patio & Barbecue Assoc., patios are consistently among the top three features requested by new home buyers, and most aren’t leaving them bare, opting for permanent cooking fixtures, refrigerators, and other amenities. Meanwhile, noted Rick Miller, owner of RJM Landscaping in Southampton, existing homeowners are increasingly itching to bring the indoors outside.

“It’s slowly catching on and moving up people’s to-do list, particularly in the past two to three years,” he said. “Kitchen spaces are more popular now, maybe because people are aware of what’s out there and realize they can do something really simple, or they can get really elaborate. There’s an option for everyone’s budget.”

Indeed, Miller noted, “kitchens tend to be a little on the pricey side because of all the gadgets and such. Typically, a basic one will have a built-in grill and maybe a fireplace tied into either propane tanks or natural gas so you don’t have to deal with filling tanks. More elaborate spaces will have a built-in grill, refrigerator, sink, cabinet space — sometimes they’ll go as far as putting in a pizza oven.”

“You can’t take a normal grill and insert it into stone; it’s not meant for that,” he said. “So it can be just as costly as redoing your whole kitchen inside. You can spend easily between $40,000 and $50,000 just for an outdoor kitchen area, including the patio and everything else — the electrical hookups, the water hookups … it can get complicated.”

Those who opt for the higher-end designs tend to be committed to outdoor entertaining to justify the cost, Miller added.

“We’re seeing more people putting in outdoor kitchens, pools, large backyard spaces, because they want to entertain into the evening. That’s where I’m seeing the trend starting to go,” said Rob Larkham, owner of Illumascape Lighting in South Hadley, which benefits from that trend because homeowners then want to light those areas (see story, page 31). “They want well-lit spaces; some install under-counter lights. People are not just entertaining in the home, but trying to bring it into the backyard.”

Harrington said homeowners on a budget shouldn’t be scared off by the sheer range of amenities available for outdoor cooking and living spaces.

“You can actually find a backyard setup to fit a wide range of budgets; it doesn’t have to be on the extreme high end,” he said. “Part of our job as salespeople is to try to help them get as much as they can for their dollar.”

That said, customers who can afford more than a grill and fridge often look to cabinets, trash disposal, bar areas, pizza ovens, and fireplaces, he went on. “And fireplaces don’t even have to use wood; you can hook gas into it. For people who want to spend real money, we can basically custom-design something of any size.”

Campedelli agreed. “We’ve done all sizes, from poolhouses with full kitchens in them to just built-in barbecues. Mostly, around here, what people are doing is nice, built-in barbecues set up for convenience, with a little refrigerator, things like that.”

Some customers intend to start there but expand their plans to larger seating areas, firepits, and patio extensions as they catch the vision of outdoor living, he went on. “We usually do one or two large projects a year like that. Some go as far as adding an overhang off the back of the house or a pool house. For people who don’t want to go that far, most of what we hear is there’s not enough time in the [warm] season to use it, but others don’t have a problem with that at all, and really go to town.”

Miller has tracked the same statistics known across his industry, how Americans, over the past 15 to 20 years, have increasingly chosen to forgo travel and invest in their homes and yards.

“People are going away less and less, with what’s been going on with travel costs and such, staying close to home, utilizing their backyards more,” he told BusinessWest. “So kitchens have absolutely become more popular. We call them outdoor living spaces because not everyone does a kitchen, necessarily; some people just want a larger-than-usual patio with seating, walls, and lighting. Two of my more recent projects also had pavilions installed to create a little shade if it’s rainy or too hot.” 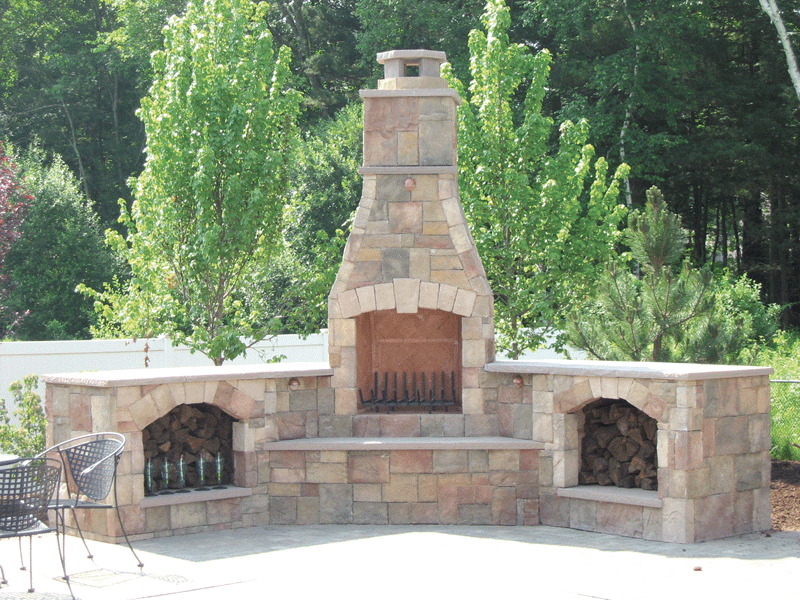 This Pioneer Landscapes project features a fireplace as the centerpiece.

Harrington added that he’s seeing more business at existing homes than at new construction. “Generally, when someone has been in their home for a while, built up some equity, been there long enough to get their savings back up, they want to invest back in their homes.”

And it’s not just for the adults, he added.

“We’re finding people are building backyards for their kids. I’ve seen it get as elaborate as movie theaters in the backyard with screens coming out of the ground. They’re building areas for their kids to play in and have friends over. They want to make an outdoor area for everyone.”

The bottom line, Pelis said, is that homeowners are increasingly seeing not only the potential aesthetic value of their yards, but the functionality, and kitchens and other outdoor-living features are a big part of that.

“People want to have more experiences in their yards and spend more time there, as opposed to just mowing the lawn and trimming the shrubs,” he added. “They want quality time with their family, and they want to get more use out of their yard.”

Harrington agreed. “It can be as simple as the family wanting a patio and a firepit to sit around at night, or something more complex. Everyone has their own vision.”

A Colorful Approach to Business