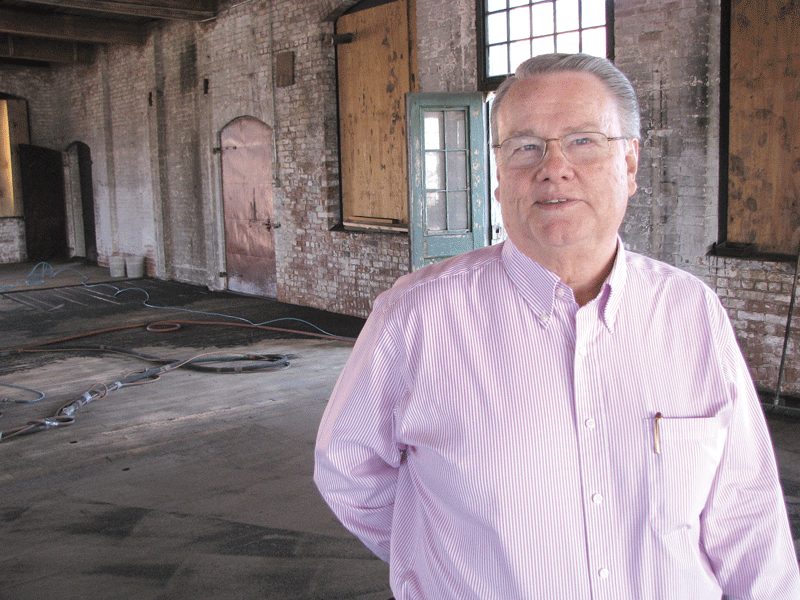 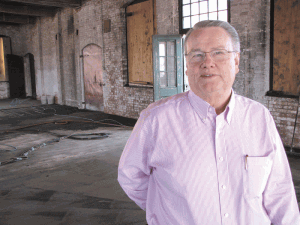 It’s called the Holyoke Professional Arts Center, or PAC, a retrofitted old mill building on Race Street in Holyoke that was once home to a company that made slitter knives. Soon, the Providence Prenatal Center of Holyoke and Tapestry Health will be tenants and thus part of a revitalization that is helping to change the look and feel of the city’s downtown and a section known as the Innovation District.

The banner gracing the front of the building at 306 Race St. in Holyoke is 25 feet wide, and it needs every bit of that length to contain all the information crammed onto it.
If one has the time and inclination, he or she could stop, read, and learn that the more-than-century-old, two-story, 18,000-square-foot building is now called the Holyoke Professional Arts Center (PAC) at Mahoney Place, with the latter part of that name referring to family members of the property’s owner, Jeff Cunningham. One could also see the creative logo for this facility, with a flywheel, similar to the ones that can be seen in the ceiling on the second floor, inside the ‘C’ in PAC.
Reading on, one could learn that the Providence Prenatal Center of Holyoke, a component of the Sisters of Providence Health System, and Tapestry Health, an agency that provides a wide range of health services to women through several locations in Western Mass., will be the first new tenants in the center. And, when seeing the name of the brokerage firm (King & Newton) handling the building — as well as a phone number and Web site — one could surmise that there is still space to be leased — roughly 10,000 square feet of it, to be more specific. Reading still further, one would note that Southbridge Savings Bank financed this endeavor, and also see some commentary in the form of a line that announces this project as “a new era in the rebirth of Holyoke.”
But while this banner tells much of the story concerning this downtown landmark and what its reuse means in the larger scheme of things, it doesn’t tell it all. Indeed, there is a lot of history to this building, and an intriguing series of developments that led to an elaborate construction kick-off ceremony on April 7, said Martin Kane, the broker with King & Newton who has handled the building for years and worked with Cunningham to give it a new start.
Meanwhile, this project is just one of several that are changing the look and feel of this section of downtown Holyoke — a few nearby buildings have been converted into artists lofts and a new convenience store recently opened — and there is the promise of much more to come.
That’s because 306 Race St. sits directly across the canal from the property that will be transformed into the Green High Performance Computing Center that is expected to fuel additional development in the downtown area, across Holyoke, and perhaps well beyond.
“We’re seeing a lot of interest in properties in that section of the city,” said Kathy Anderson, director of the Holyoke Office of Planning and Development. “We’re meeting with people and talking, and in the meantime we’re looking at what we need to do to spark private development there.”
Anderson said there are more developments — from new stages of the city’s canal walk project to the possible reintroduction of commuter rail service after a more-than-40-year absence, that could spur more progress in the central business district of the Paper City and a section now known as the Innovation District. Taken together, the initiatives are a classic case of public-sector investments designed to inspire private-sector spending.
“There’s private development happening, and that’s what we were hoping for,” she said of the Race Street project and others like it. “The Innovation District Task Force is charged with creating ways to leverage the high-performance computing center, to take advantage of it and make something more happen in Holyoke and the region because of it.
“This is just one small project taking shape across the canal,” she said of the PAC. “They’ll be seeing what’s going on outside their windows; people are getting excited about this — there’s a lot of interest in downtown Holyoke.”
For this issue and its focus on commercial real estate, BusinessWest takes an indepth look at the Race Street project and how it is just one small example of progress in Holyoke’s downtown, and evidence of that new era in the rebirth of Holyoke that the banner announces.

Building Momentum
“Great bones.”
That was the descriptive phrase Kane used at least a few times to describe the L-shaped Race Street building as he gave BusinessWest a tour of all three levels. “Rock solid” was also tossed out a few times for emphasis.
Such language was deployed to convey the sentiment that while this property has seen better days, it certainly has intriguing ones ahead of it, and has the foundation, in more ways than one, for new and intriguing uses.
Tracing the history of the property, Kane said it dates back to the late 19th century, and has housed a number of different manufacturing operations over the years. Most recently, it was home to Service Machine, an outfit that made slitter knives, which was purchased by Cunningham, a Worcester-based real estate developer, several years ago.
After that business and its equipment were moved to another facility owned by Cunningham, the property stood vacant for some time, said Kane, adding that Cunningham approached him in early 2008 to explore new options for filling the square footage.
“He asked me what I thought the highest, best use was,” Kane recalled, “ and I told him I thought it would be a good location for offices and service businesses.”
Plans to lease out the property for such purposes hit a brick wall in the form of the Great Recession, which created a huge glut of manufacturing, office, and warehouse space in Holyoke and across the region. But when Kane offered the site as a possible option for administrators at the Providence Prenatal Center of Holyoke, who were looking to trade up from space on High Street, there was strong interest.
“We explored it, and it got to the stage where there were lease negotiations, but nothing came from them,” said Kane, adding that by the spring of 2010, Cunningham was ready to put the property on the market, when the SPHS was approached one more time.
This time, a deal was struck, he said, adding that several months later, Tapestry Health, which has an office on Main Street in Holyoke, signed a letter of intent to relocate to the Race Street facility. Those two agencies will occupy the first floor of the building, said Kane, adding that the 6,000 square feet on the second floor and roughly 4,000 square feet in the lower level have a number of potential uses.
As he gave his tour, Kane gestured out an open window on the second floor to the buildings across the canal that will become the high-performance computing center, and expressed the hope — and expectation — that the much-anticipated project would attract a number of technology-related ventures to the downtown area.
“This would be an ideal site for a Web-development company,” he said of the longer leg of the ‘L,’ which has several of those aforementioned flywheels in the ceiling. “The computing center could generate a lot of interest in this space.”
The same could be said for the whole of Holyoke’s so-called Innovation District, said Anderson, adding that the HPCC is the largest of several developments that could bring new businesses — and greater vibrancy — to the downtown.
Another is the potential for the return of commuter rail, last seen in Holyoke in the late 1960s, she said, adding that the Paper City would be part of service that would run from New Haven into Southern Vermont.
City officials are currently looking at two options for a train station — the former station on Bowers Street, designed by HH Richardson, built in 1883, now owned by the Holyoke G&E, and vacant for some time, and a site for new construction at the corner of Dwight and Main Streets.
“We’re trying to get a train station up and running by the time the train goes by,” said Anderson, adding that the larger mission is to make infrastructure improvements that will connect the recently opened intermodal transporation center on Maple Street, as well as the canal walk, to that train station, wherever it is located.
Meanwhile, the canal walk project is bringing more vibrancy to the downtown area, said Anderson, adding that open studios conducted by groups of artists now located in buildings on nearby Dwight Street are creating more foot traffic in the area. One goal, long term, is to utilize a section of Race Street between Appleton and Dwight Streets for open-air festivals.
Overall, city planning officials are talking with developers now making inquiries about downtown Holyoke and its Innovation District, while also working to determine what additional steps can be taken to inspire and facilitate private-sector spending.
“We’re looking at it from the prospective of what we need to do to create more growth in that area,” she explained. “What type of public investments do we have to make in order to spur private development? We’re looking under the street, on top of the street — do we need to work on our water-supply system or fiber optic infrastructure? We’re preparing for the future growth of the city for the next 30 to 50 years.”

Positive Sign
The banner across the front of the Race Street building provides some good reading, and the expectation is that there will be more of these to appear on downtown properties in the months and years to come.
In many ways, it is a sign of the times, a sign of progress, and a sign of how public investment can spur private development — in both a figurative and very literal way.