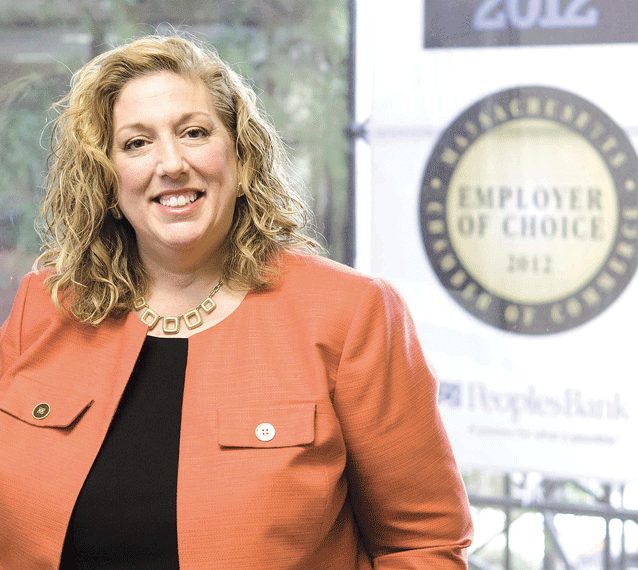 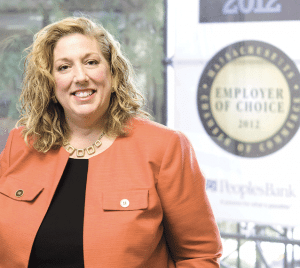 Janice Mazzallo says the internal culture change at PeoplesBank reaps benefits for both employees and customers.

When PeoplesBank was recently named an Employer of Choice by the Massachusetts Chamber of Commerce, Doug Bowen was pleased, but he’s quick to note that the honor was based on testimony from the bank’s leaders.

However, when the Boston Globe named the bank a Top Employer last month, that may have been even more gratifying, said Bowen, the institution’s president and CEO — because the honor was based solely on employee input.

According to Janice Mazzallo, senior vice president of Human Resources, “we did an employee engagement survey, a series of questions about the bank’s leadership, communication, benefits, and work-life balance. That feedback qualified us to get that award. That was a powerful and proud moment. This culture shift has taken a long time and a lot of energy, and this was another recognition that our people really do appreciate the environment here.”

The ‘culture shift’ she cited wasn’t accidental, she noted, but the end result of a plan set in motion almost a decade ago to improve the bank from the inside out.

“Our senior team got together for a strategic planning session,” Bowen recalled. “PeoplesBank was a good bank with a wonderful historical legacy, but we wanted to make it a great bank. And to be this great bank we aspired to be, we wanted to have a great culture.”

Much of the responsibility for crafting specific elements of that culture change, he noted, fell to Mazzallo after she joined the institution eight years ago. “She was the architect of our cultural activities and moves made here at the bank that have really blossomed into this wonderful environment we all get to enjoy every day.”

As Mazzallo explained to BusinessWest, “we began by communicating to employees what the strategic plan was and their role in support of that” — an effort that included the development of a training and leadership program to aid employees in implementing each piece.

That multi-faceted endeavor has helped bring about improvements in communication, expanded benefits, training and career-development programs empowering bank staffers to make more decisions on their own, and events like a weeklong festival honoring employees each year.

“The overarching goal was to attract and retain high-quality employees,” she said. “We felt that meant a couple of things. We wanted to bring in the best and brightest from outside into this organization, and we have, in fact, been able to do that — I think, in part, because the culture attracts people from other banks, and larger banks. As for the second piece, we knew we had very good employees, and we wanted to develop them internally so they could be promoted, so we wouldn’t have to go outside the bank.”

The third leg of that strategy has to do with benefits, Mazzallo explained, and a diverse package of voluntary benefits and perks ranging from an adoption benefit to a wellness group to chair massages. “These aren’t things you have to put in, but they’re additional pieces that make it much nicer to come to work.

“I’ve worked in places where, on Sunday night, I dreaded going in. Many of us have,” she added. “I don’t want to feel like that, and as the head of Human Resources, I don’t want anyone on my team feeling like that. Most people have to work to make a living. If you have to work, why not make it a great environment for everybody?”

“When you go into any store or anyplace else where the people are engaged and happy to be there, you get better service. That’s what we’re aiming for, and that’s what we’ve achieved at the bank.

“All of that is wrapped together,” he continued. “If you have a great culture, you get great employee engagement. That’s reflected in our community service, too; our employees serve on the boards of 115 nonprofits in the Pioneer Valley.” PeoplesBank has also been honored by the Boston Business Journal for the amount of volunteer time and money its employees donate to charity.

As part of its renewed emphasis on culture, the bank has taken on a cause of its own, so to speak, in environmental sustainability. That’s manifested in two branches recently certified by Leadership in Energy and Environmental Design for their ‘green’ construction elements; a third LEED branch is currently being built in Northampton.

It’s also reflected in touches like electric car charging stations at the bank’s Holyoke headquarters; $60 million in investments in wind, solar, and hydroelectric projects; and an annual environmental fair where bank workers can learn about what they can do to support sustainability — efforts that, as a whole, contribute to the feeling that employees are part of something important, and bigger than themselves.

“One of our values is environmental sustainability, and that’s shared by employees; it’s part of the whole culture here,” Bowen said.

Added Mazzallo, “we feel it’s the right thing to do. We live in a really beautiful area, with some unbelievable natural resources; we’re very fortunate. And when we bring new people into the bank, there’s a level of expectation, a commitment to the environment and to the community; those things are important. So it’s no longer just about coming into work. Our people really want to make those connections.”

As for what lies ahead, Mazzallo said PeoplesBank does not intend to rest on its laurels, instituting the noted Ritz-Carlton training program next year to ensure that employees offer “legendary service, that goes above and beyond the norm. That involves empowering employees to make decisions to benefit the customer. It might be as simple as giving flowers to a customer that just welcomed a grandchild. It’s the small things that often make the difference.”

Bowen said the bank’s status as a mutual organization allows it to make employee-and community-centered decisions without worrying about reporting to shareholders. But he also believes the bank’s financial performance justifies a belief that happy employees lead to satisfied customers.

“When employers put employees first,” Mazzallo said, “when they treat their people well, and when employees feel respected, that is going to show in the kind of service they provide to the outside world.”

The Alvah Stone Offers a View — and Much, Much More