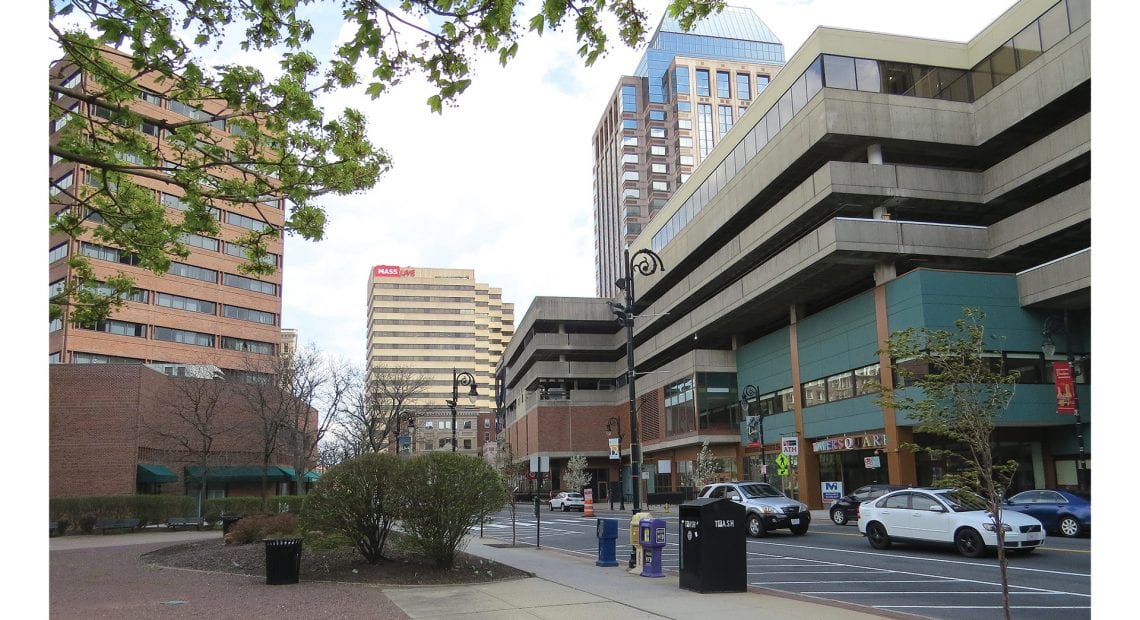 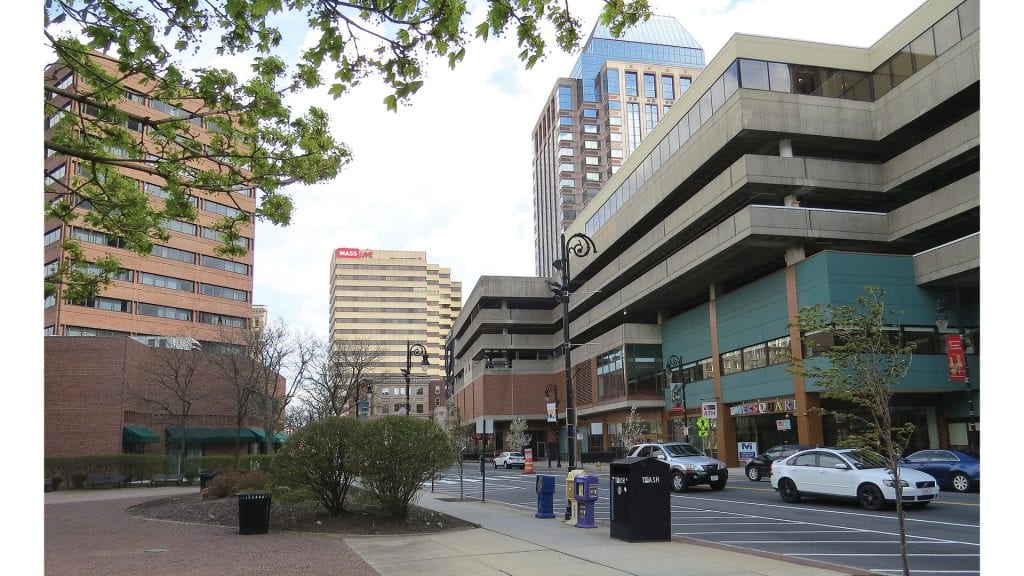 Roughly 14 months after COVID-19 arrived in Western Mass., the commercial real-estate market is showing some signs of life, especially with industrial properties, which are in considerable demand, with limited supply. But as companies start to return to their offices, questions remain concerning just how much space businesses will need long-term and how much demand there will be for the large inventories of space now, or soon to be, available. 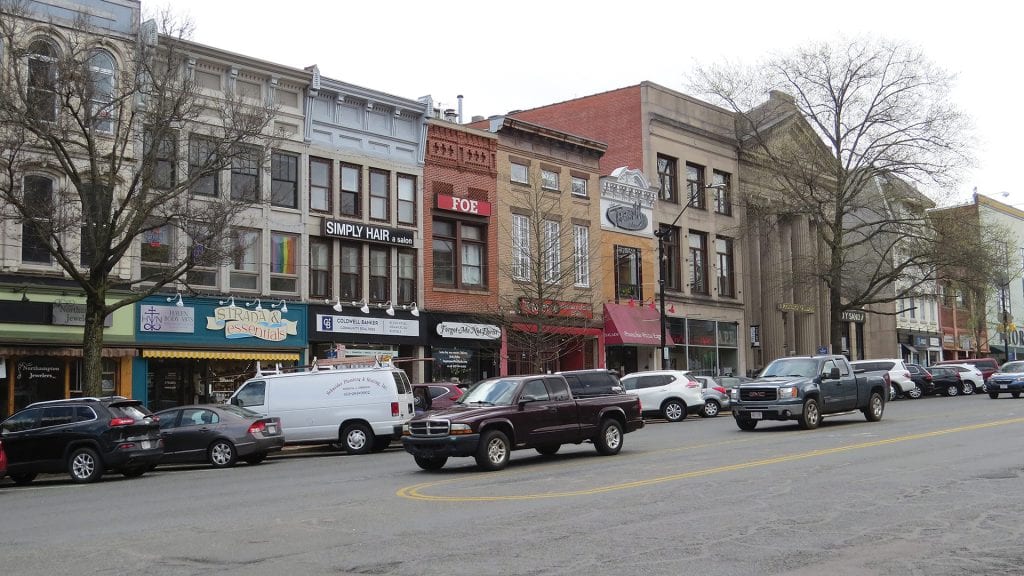 Pat Goggins has been selling and leasing real estate in and around Northampton for almost a half-century now. It’s very safe to say that he knows that market better than anyone.

And he feels comfortable now, a full year and change after COVID-19 first arrived in this region, in saying that the Northampton market has “bottomed out, and is starting to work its way back to what it had become.”

He bases this assessment on a number of things — from new leases being signed for some vacated properties downtown to interest in some other buildings for sale and lease, to the lease rates themselves, which, he said, haven’t changed appreciably in 20 years now.

“We’re seeing some new activity that is creating some positive vibes,” said Goggins, president of Goggins Real Estate Inc., adding that, while challenges remain and COVID continues to take a toll on Northampton, there are many signs that a corner of sorts is being turned.

Using slightly different words and phrases, other commercial real-estate brokers and managers we spoke with said essentially the same as Goggins, that the market is moving back toward — here comes that phrase again — ‘something approaching normal, or a new normal.’ Meaning, they believe, that the worst is likely over.

“We still have a ways to go, but there is movement back to normalcy,” said Mitch Bolotin, a principal with Springfield-based Colebrook Realty Services, who is using, among other things, the parking-lot test when it comes to what’s happening within this market. 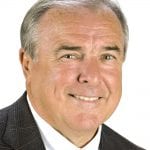 “We still have a ways to go, but there is movement back to normalcy.”

Indeed, he said the parking lots at the PeoplesBank building in Holyoke, 1441 Main St. in Springfield, and the Basketball Hall of Fame complex in Springfield, just some of the properties managed by the company, are more populated than they were just a few months ago, and much more full than last fall. The cars in those lots are evidence that businesses are, in fact, returning to their offices and the buildings are moving closer to pre-COVID levels of occupancy and vibrancy.

Still, hard questions remain about just how many more cars will be returning to those lots — and when. And these questions — which are being asked in urban areas across the Northeast and, indeed, across the country — will likely determine to just what extent the market fully recovers. Indeed, as leases have expired over the past year, some companies have downsized, said Bolotin, a few have actually upsized to give employees more space in the wake of COVID, and others are essentially standing pat.

Meanwhile, when it comes to negotiating new leases, most tenants have been able to take advantage of a market that favors them and secure a number that certainly isn’t higher, and in many cases is lower.

Ken Vincunas, president of Agawam-based Development Associates, which manages several office buildings in this region, including the Greenfield Corporate Center and Agawam Crossing, said that nearly 14 months after COVID forced many people to work remotely, questions linger about when and if businesses will summon employees back to the office, and how many will actually come back.

“I think people like to work at home,” he said. “Businesses want them to come back, but I’m not sure the employees will want to go back.”

Meanwhile, some segments of the commercial market, especially industrial properties, are vibrant, if not white-hot, said Vincunas, noting that there isn’t enough inventory to meet a growing need. 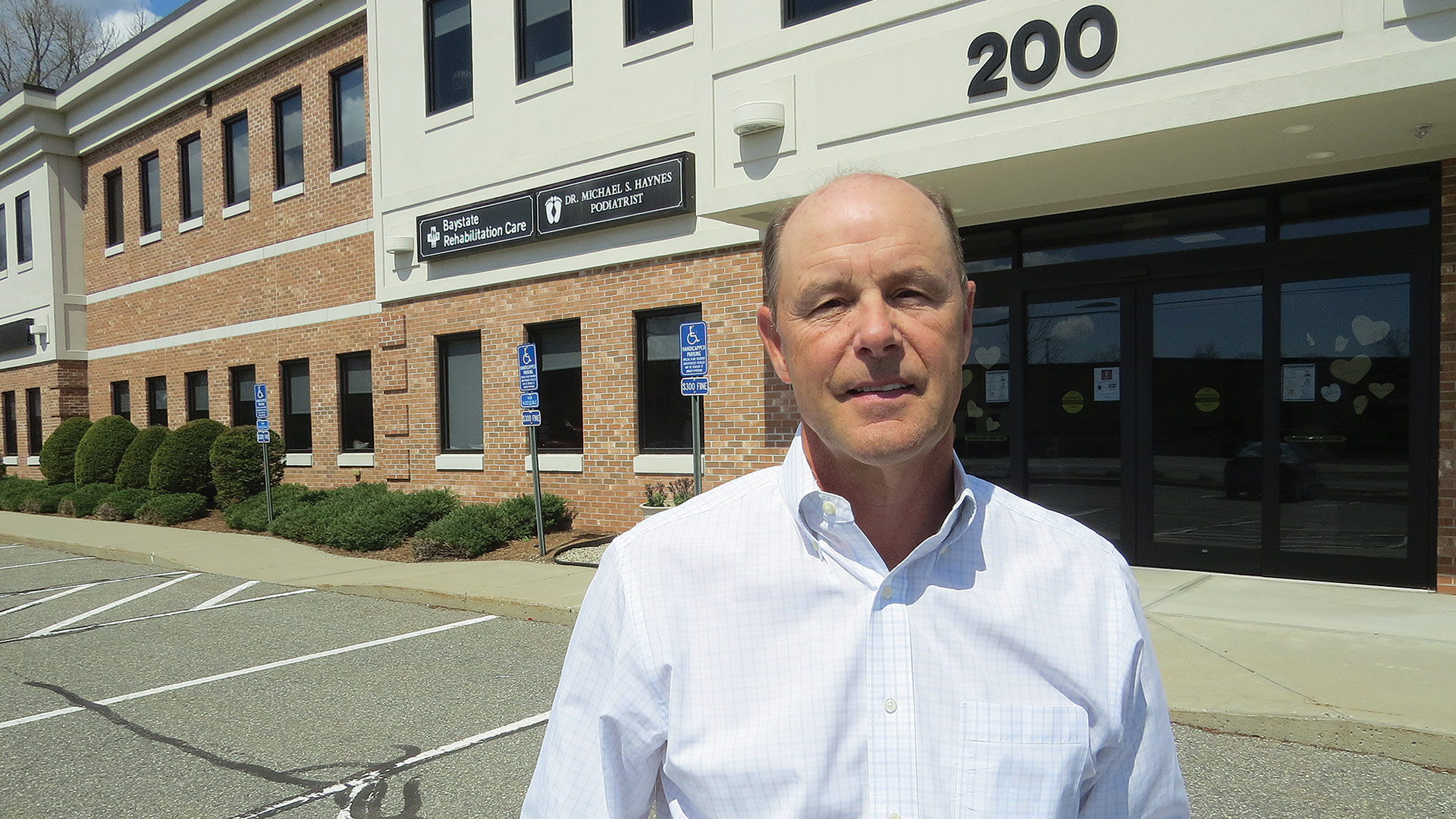 While COVID has slowed some segments of the commercial real-estate market, Ken Vincunas says, others, like industrial, have been very active, with inventories struggling to meet demand.

“The bulk of our portfolio is industrial, and that’s all pretty strong right now — inventory for that is very low, and prices are very high,” he said, adding that the market for medical real estate — and his company has some of it in the portfolio as well — remains strong.

For this issue and its focus on commercial real estate, BusinessWest takes an in-depth look at what’s happening within the local market and what may happen as the region continues its pursuit of ‘normal’ — whatever that means.

As he talked about the Northampton market and what has happened within it over the past year or so, Goggins used the word ‘generational’ to describe the changes to the landscape.

By that, he meant many of the businesses that have become synonymous with Paradise City were started by people his age — Baby Boomers at or now approaching retirement.

“Downtown Northampton took off in the ’70s, and it was fueled by people who were contemporaries of mine who came into town or who were part of the community and decided to open restaurants and shops,” he said. “It was fueled by the Baby Boom generation.”

And what COVID did was push some of those entrepreneurs into retirement maybe a little sooner than they were planning, he said, adding that this led to some high-profile vacancies on Main Street, a phrase he uses to connote both that specific thoroughfare and the whole of the downtown. Those vacancies include the massive Silverscape Designs building, a former bank; 147 Main St., formerly Cathy Cross; 162 Main St., formerly Artisan Gallery; and others.

In recent weeks, though, new tenants have been secured for many of these properties, he said, noting that Rebekah Brooks Jewelry has moved into the Cathy Cross space, 25 Central has taken the Artisan Gallery space, and Cotton Gallery has moved into 153 Main St., formerly Thelo. This movement reflects his earlier-stated sentiments that the market has, in fact, bottomed out and is moving back up again, although there is still work to do.

“The vacancy rate is higher than what we would prefer, but we’re nipping away at it,” he said, adding that the emerging cannabis industry has played a factor in these efforts, and it could play a still-larger role moving forward, with nearly a dozen ventures at some stage of the permitting process.

As for the Silverscape property, he said there has been some interest expressed in it, but it is a large space with some accompanying challenges when it comes to a new use.

“It’s not for the faint of heart,” he told BusinessWest, adding that, while the former bank spaces, like teller windows, were imaginatively integrated into the jewelry store’s design, they may in some ways limit what can easily be done with the space now. 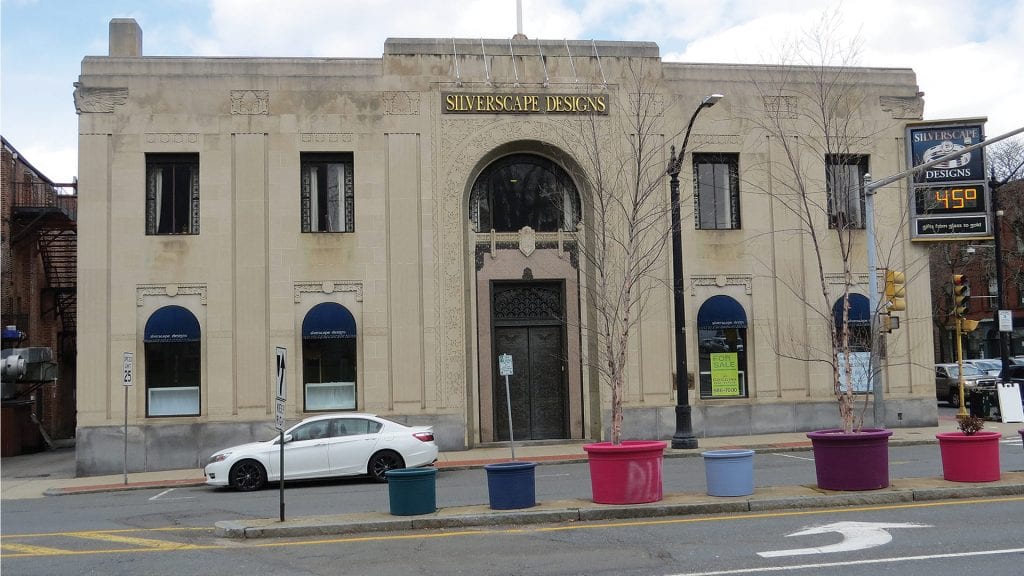 The Silverscape Designs building in downtown Northampton, now on the market, will present opportunities and challenges to its next owner, said Pat Goggins, adding “it’s not for the feint of heart.”

Assessing the office market, Goggins echoed others in noting that, while more businesses are returning to the spaces they completely or partially vacated last March, there are questions about whether businesses that had to rely on people working remotely will bring everyone — or anyone — back to the office.

Vincunas said he has a diverse list of tenants at the Greenfield Corporate Center, including some state agencies that he is not concerned about when it comes to downsizing or not renewing, but also some financial-services and technology-related tenants for which there are some questions moving forward.

“People have learned to work outside the office, so we can’t be sure what will happen long-term,” he said, adding quickly that, for the short term, the property has benefited from COVID in one respect — the regional jury-pool operation has moved into 25,000 square feet of space at the facility for at least a year.

“They couldn’t space people out for jury-pool selection at all the courthouses — there just wasn’t room — so they created an off-site central-clearinghouse type of space,” he told BusinessWest. “We had a big piece of space, so they took it.”

Boloton said he’s seeing some evidence that, while the experiences of the past year have shown that remote working can be effective, most businesses want their workers back together in one place.

“I’ve seen it with a number of businesses … they’ve said, ‘we’re working at home, we’ve figured it out, but there’s still a need to be in the office, and, over time, people want to be in the office,’” he said, adding that the parking-lot test, as unscientific as it is, provides some evidence that companies are working their way back to their office spaces. “It’s a matter of want to, and need to, and there’s a slow progression back. There’s a steady return toward coming back to the office; we’re not there, but we’re getting closer every day.”

For other evidence of progress, he cited the recent closing of a deal with a business to lease 27,000 square feet of office space in a property at 11 Interstate Dr. in West Springfield. He could not disclose the new tenant, but said it was an existing Western Mass. business that is expanding.

“It’s a market that has some areas of slowdown reaction to the pandemic,” he said, listing retail in that category. “But there are other areas that are busy, and we can’t find inventory. Industrial is very strong, and we have a lot of transactions for users buying buildings, so we have a number of properties under contract.”

Between the parking-lot test, some new leases being inked, and tight inventories in the industrial market, the commercial real-estate landscape seems to be changing in this region — and for the better.

That said, many questions remain about the market and especially the office buildings that are not only home to many types of companies, but also generate business at neighboring service- and hospitality-related enterprises.

It may be some time before all those questions are answered, but for now, it seems the worst may well be over and, as Goggins and others noted, this sector is moving steadily closer to something approximating normal. 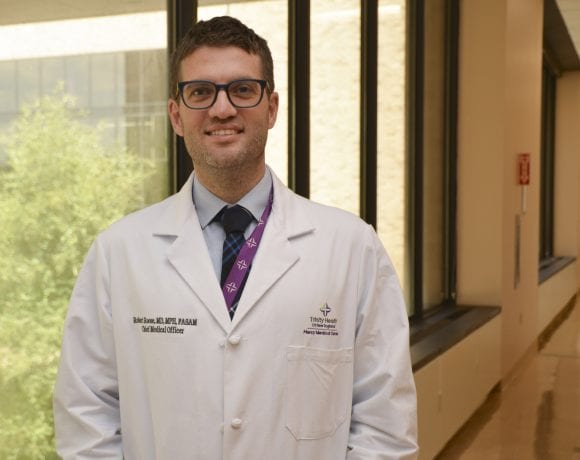