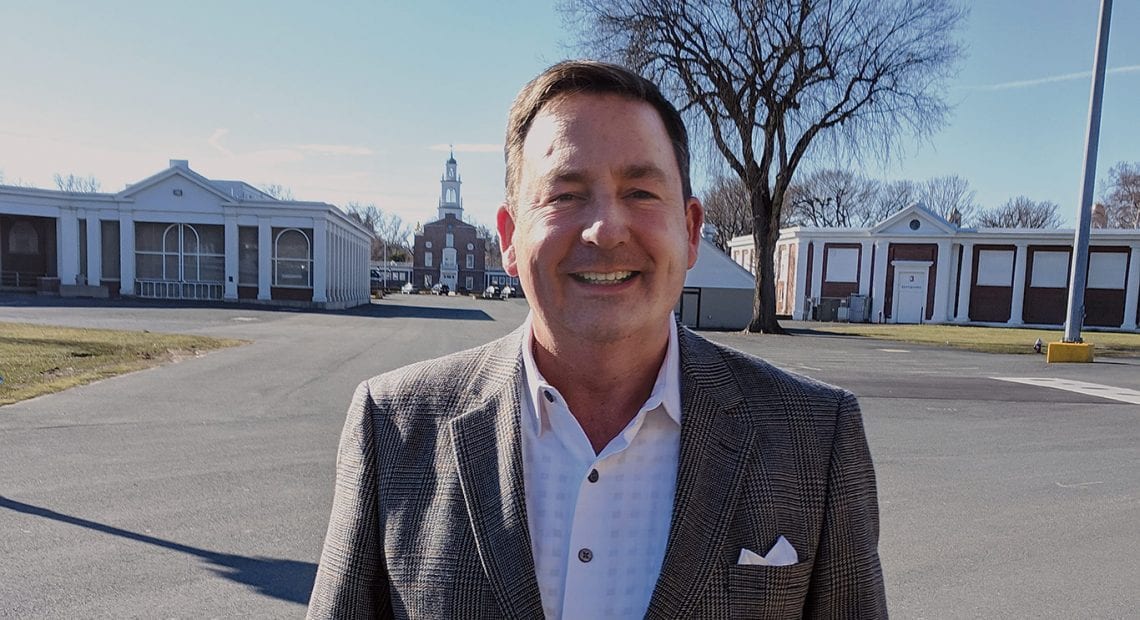 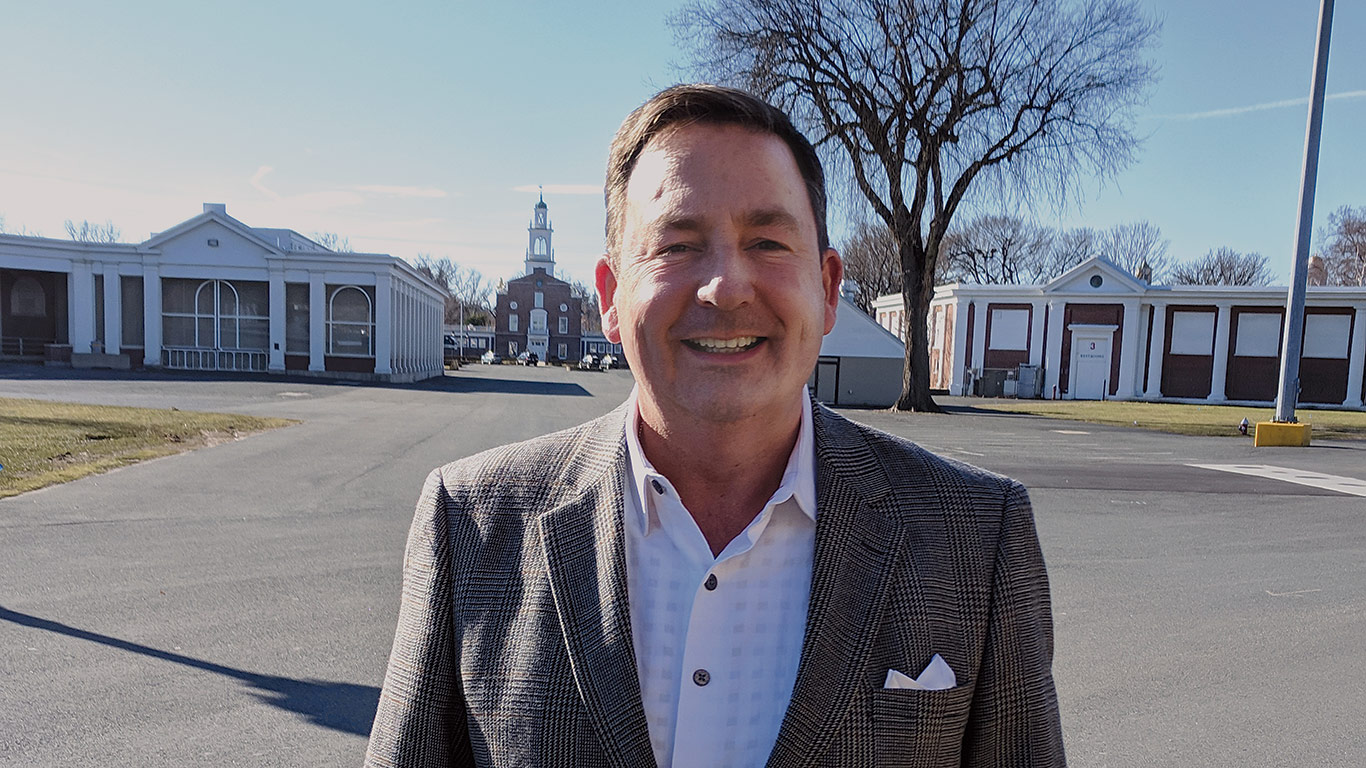 When people think of the Eastern States Exposition, they often think immediately of the Big E, the 17-day fair that dominates the tourism landscape at the start of each fall. But Eastern States is much more than that, as reflected by its diverse array of events, both large and small, and the resulting economic impact on the region — not to mention its important mission of keeping its agricultural heritage alive for future generations.

Fifty-two years ago, notes Greg Chiecko, a local camping group set up shop at the Eastern States Exposition — and have come back every year since.

“That was our first non-fair event. They took the building for the whole month — it took that long to set up, do their show, and move out.”

How things have changed, said Chiecko, director of Sales. The Big E, the 17-day fair that has taken place each fall for more than a century, remains the ESE’s most famous calling card. But outside the fair, the grounds hosts more than 100 events annually, some small-scale, some much larger, like the camping and outdoor show that now crams hundreds of vehicles into three large buildings each February. 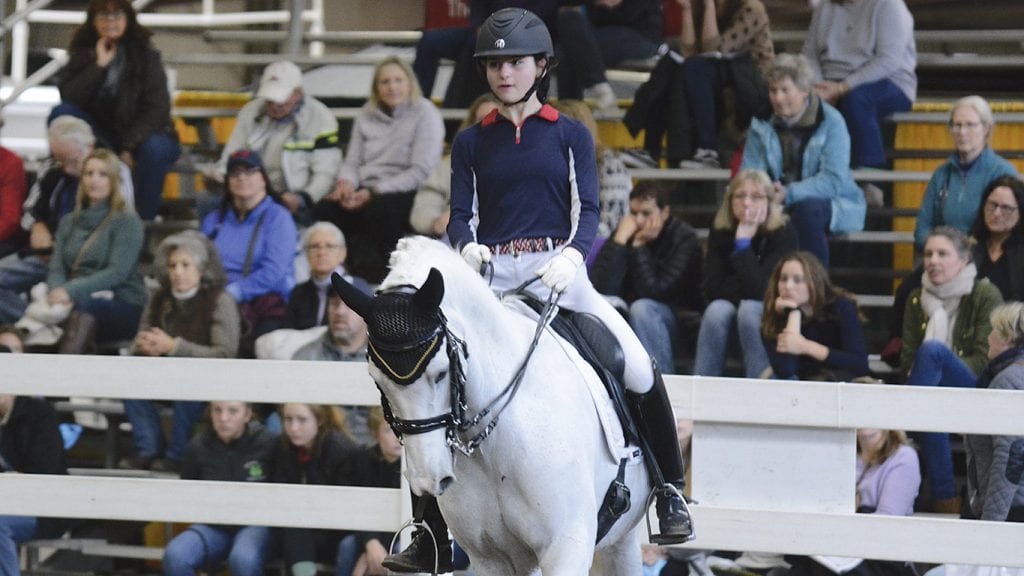 One of the many horse shows at the ESE.

“The dynamics have changed substantially over the past 50 years,” Chiecko said. “They’ve been doing it so long, it’s amazing. They still take a little while to move in, but they do it with such accuracy, and they literally move out of all the buildings in a day.”

“We call ourselves the flexible facility in the heart of New England, and we truly are,” said Chiecko, who will leave the ESE next month to become president and CEO of the Outdoor Amusement Business Assoc. “And every show is different. The Big E and the Fiber Festival are the only events we produce. We’re a landlord the rest of the year. Some of these are volunteer groups, some are professional promoters, some are associations … it runs the gamut. They produce the shows, and we offer services, like ticket takers, ticket sellers, security, and more. They can use our services or use their own.” 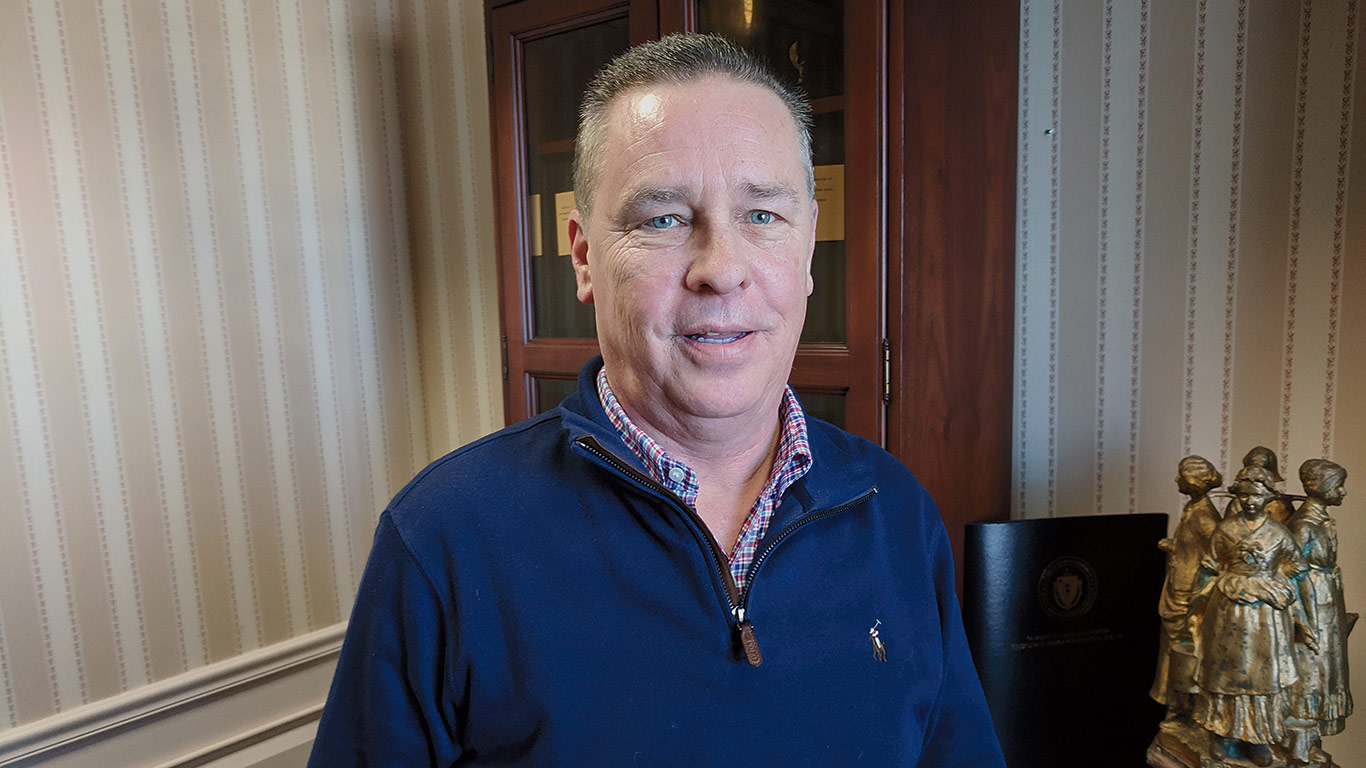 Greg Chiecko calls the ESE “the flexible facility in the heart of New England.”

Gene Cassidy, president and CEO of the Eastern States Exposition, noted that the facility also offers services like advertising, sign manufacturing, banking, and other amenities that many venues don’t have in their portfolio. The result of this flexibility and roster of services results in a high retention rate, with groups that return year after year. In addition, he noted, “some staff people have been here for 40 years. So there’s a lot of institutional memory.”

The ESE’s consumer shows — home shows, gun shows, camp shows, sport shows, and the like — tend to be among its most popular offerings, Chiecko said. “We’re also the dog-show capital of the Northeast. In 2017, we had 36,000 AKC-registered dogs on our property, just from the AKC shows, not counting other groups. Dog shows are a big deal. And we love dog shows because they come on holidays: Easter, Thanksgiving weekend, Fourth of July weekend, times of the year when it would be difficult to fill our spaces.”

EASTEC, the largest manufacturing event east of the Mississippi, returns to the fairgrounds this May for its biannual visit. “Exhibitors love it, and the area restaurants and hotels do great,” Chiecko said, adding that local trade shows, from the likes of J. Polep Distribution Services and Performance Food Group, also regularly host events. Meanwhile, clients book parties and weddings at Storrowton Tavern and the Carriage House, which managed by a private firm but owned by the ESE.

That’s far from an exhaustive list, but it does lend credence to Chiecko’s “flexible facility” motto.

Despite the myriad events the ESE presents each year, its heritage remains firmly rooted in animals and agriculture.

“We do 13 horse shows outside the three we do for the fair,” Chiecko said. “We do a sheep show, youth cattle shows, and we have a big poultry show coming up next month. And this past year, we had the National Rabbit Association. We had 18,000 rabbits here.”

The attendance level varies among these events, Chiecko noted. “A lot of the horse shows tend to watch themselves rather than anything else. But the rabbit show attracted a huge population from the general public.” 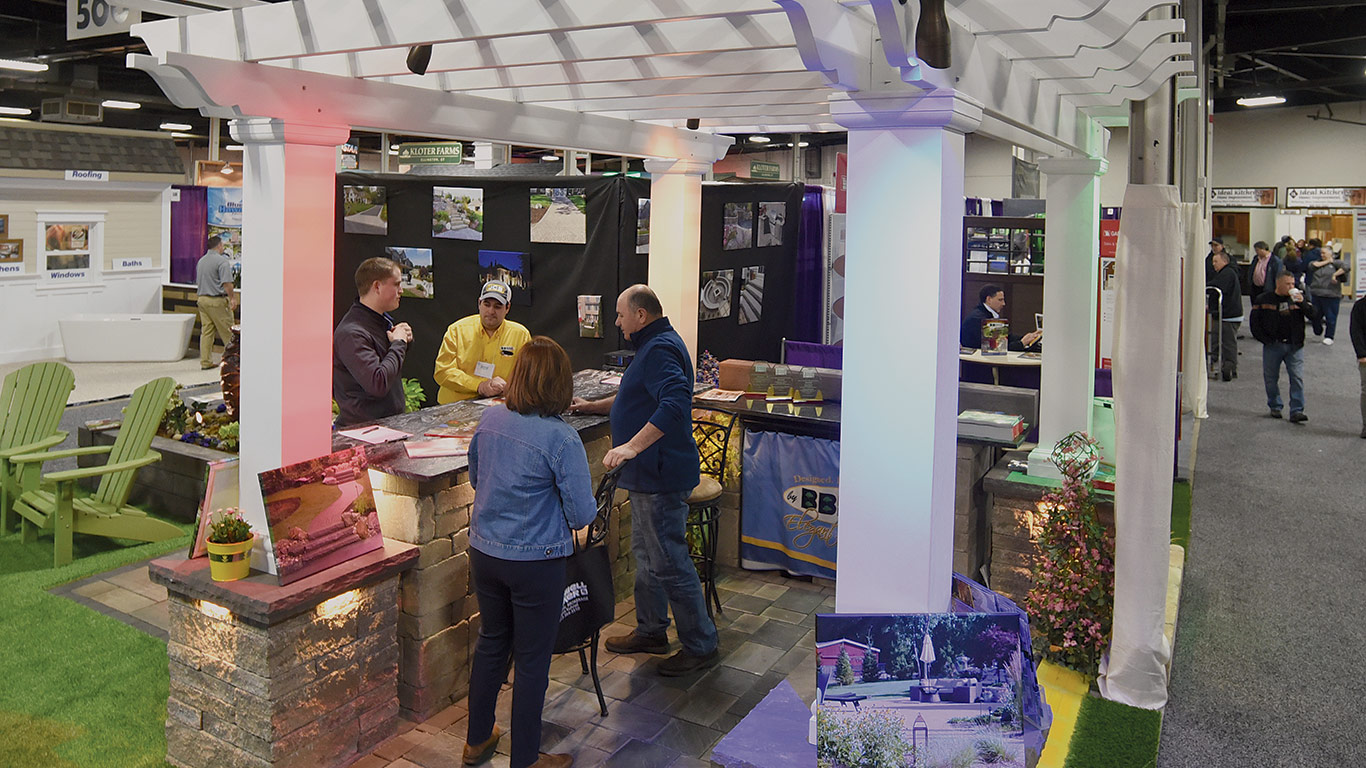 However, when it comes to most animal events, Cassidy said, “I wish there were more people engaged. It’s our job to promote the breed or species, put it out there for the public to consume, and they’re free events. The fact is, if the Big E had more days or we had more acreage, more of those shows would take place during the course of the fair so we could get as many people from the public exposed to that. But we do our best to try to promote interest in it; we believe it’s important for agriculture. It’s mission-driven; we’re not making any money on that. That’s all stuff we promote and invest heavily in.”

Still, “the more shows we can put in during the fair, the more it helps us fund our agriculture program, most of which happens outside of the fair, in the other 49 weeks of the year,” he went on. “We make it available to the public so they can have the exposure. It’s tough in this day and age, when the youth in the general population are so disassociated from agriculture, and we deal with the hardcore animal activists, the people who have serious agendas against consumption of animals, and they influence public policy to the detriment of the greater good of society.”

That has affected the national 4-H program, which gets federal funding and is being influenced by people outside of agriculture, which results in regulation making it harder for children to be involved. Meanwhile, Future Farmers of America, a private nonprofit not under federal control, is going strong, Cassidy explained, noting that, no matter the vehicle, it’s important to keep engaging young people in agriculture and animal rearing. “Those are the kids that going to feed the world in the next generation.”

It’s one of the reasons why the Big E, which continues to set attendance records, is so critical, in that it helps fund the other 49 weeks of events while driving interest in animal shows; people are more likely to check out such shows once they’ve bought a ticket and are at the fairgrounds.

“At one time, we had four or five antique shows here. The Internet has almost eliminated antique shows because people can shop from the comfort of their own living room.”

“The fair is just a fundraiser. It’s like your church bazaar, except we just happen to run 17 days and are one of the biggest in the world,” Cassidy said. “It’s a fundraiser for us to drive stewardship into our mission. I wish more people were as excited about that mission as we are. I look down the road a generation, and we’ve got a lot of work to do.”

On the other hand, Chiecko said, the consumer shows are still strong because people enjoy events that reflect their hobbies and interests. But even there, the Internet has impacted certain shows.

“At one time, we had four or five antique shows here. The Internet has almost eliminated antique shows because people can shop from the comfort of their own living room, which is really too bad, because the quality of what people get isn’t nearly the same. It’s the same with craft shows. That’s the nature of the business cycle — we’re no different than a brick-and-mortar store dealing with Amazon.”

He’s not just talking about planned events. The fairgrounds has been a staging center for emergency situations as well. Northeast Utilities set up camp and fed its crews there during the famous October 2011 snowstorm. A few months before that, the ESE’s dorms housed hundreds of people suddenly made homeless by the tornado that struck the region. “We’ve hosted large RV rallies here,” Chiecko said. “If a cattle guy breaks down on 91, they might come here.”

So there’s a community impact in addition to the economic impact to the region — more than a half-billion dollars a year, he noted, with only part of that generated by the 17-day Big E. “Year-round operations play a big role.”

He believes its impact will only grow now that MGM Springfield has opened across the river.

“I think we have a good partnership,” he said, one that extends beyond parking cars for MGM during its first week of operation last summer. “They bring large conventions to town, which utilize rooms and banquet spaces downtown — well, we have 355,000 square feet of exhibit space. We’re hoping to see more city-wide conventions. It’s a tight-knit community here.” Dog shows have become a surprisingly robust source of bookings for the ESE.

For convention goers and people who attend events at Eastern States, MGM is another activity to take in while visiting Springfield, he added, while people who come to Springfield mainly for the casino might also take in an event at the fairgrounds — and everyone benefits.

“Because of the advertising campaign MGM launched, it put Springfield on the map in a bigger way, and I think our fair benefited from that,” Cassidy said of last year’s record attendance at the Big E, which took place a few weeks after MGM opened. “My hope is that, with the synergies we’ve developed in partnership with MGM, we can help bring more commerce to the city of Springfield in the form of non-fair events: trade shows, professional shows, manufacturing shows.”

With that in mind, he keeps plugging away at that year-round mission — because, simply put, the Eastern States Exposition is more than a center for events of all kinds. It’s a critical piece of the region’s tourism and economic picture.

“If this place ever went away, the impact on our economy would be devastating,” he said.

Which is why he doesn’t intend to let the ESE go to the dogs — well, except on those weekends when it does.

Old Meets New at the Red Barn at Hampshire College