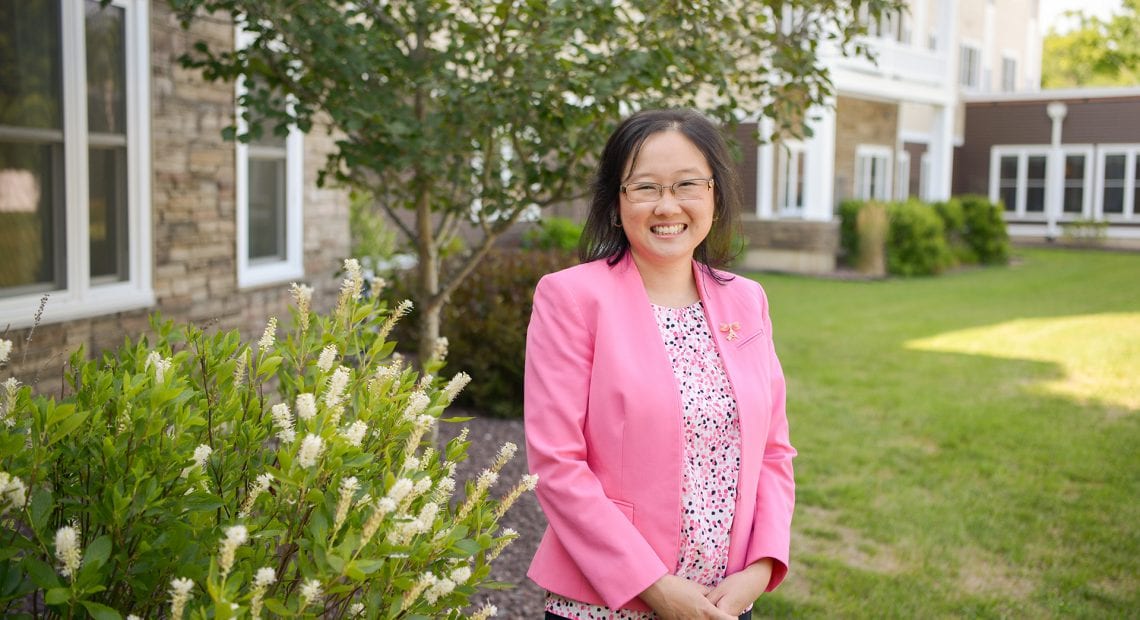 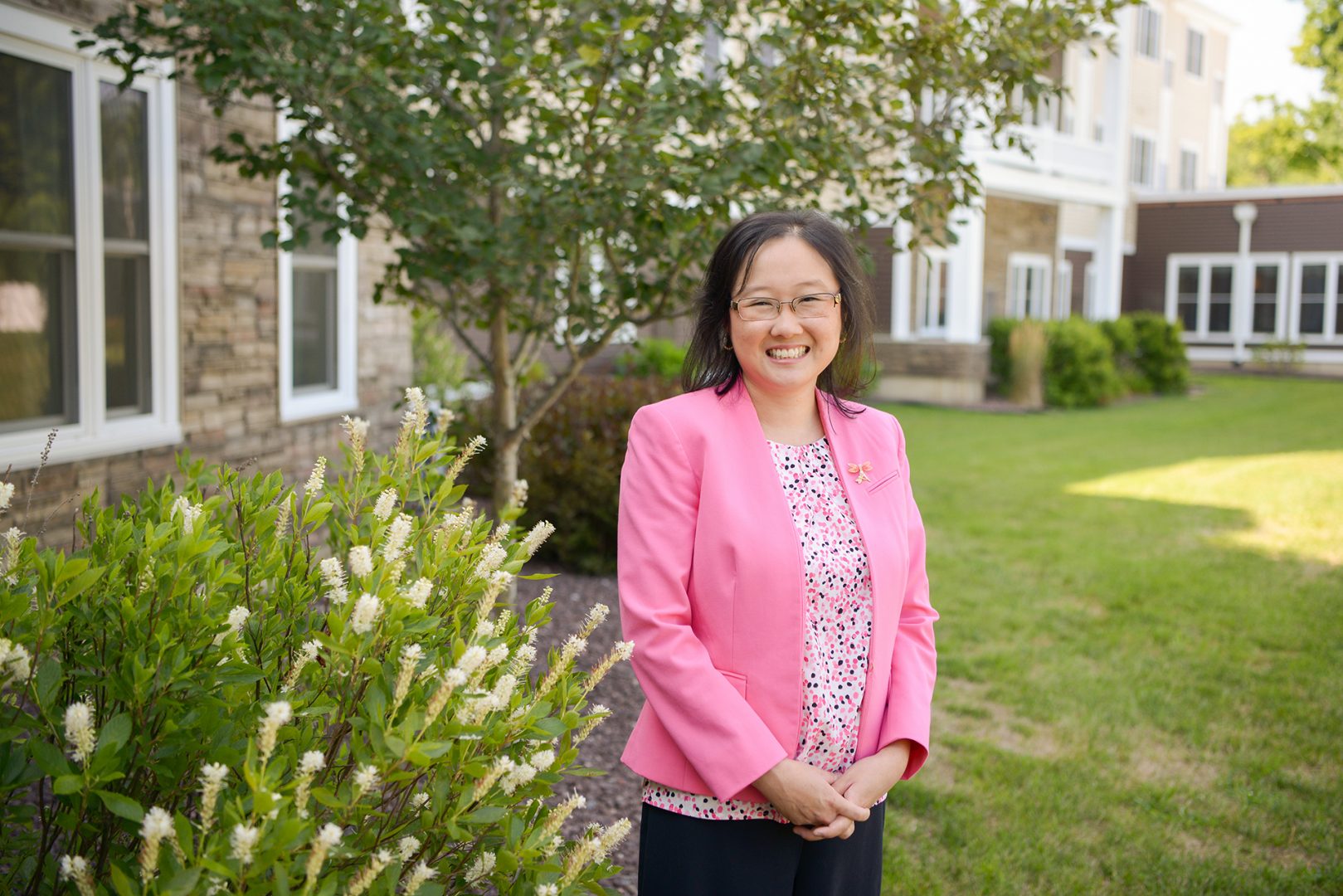 It’s safe to say that, at the age of 13, most people don’t know what they want to be when they grow up.

But Emily Uguccioni thought she had it all figured out; she wanted to be an attorney or judge — a figure in the courtroom. At the very least, she knew what she did not want to do — work with the elderly.

But a volunteer position at the Alzheimer’s Resource Center in Connecticut changed her perspective. The facility, right across the street from her middle school, became the foundation for what would become a career she completely fell in love with.

“I wanted an assignment anywhere not near an old person,” noted Uguccioni when explaining her decision to volunteer at a nursing home, but not work with or near those living there.

All her friends read to residents or took them to activities, but she wanted no part of that; instead she got a job in the library organizing all the books. One day, she was instructed to bring a paper to a nurse on one of the units, and upon her arrival, she ran into an old woman.

“This lady said, ‘I’ve been here for four days, and no one has come to pick me up,’” Uguccioni recalled, adding that she did not realize at the time that people with dementia have a disassociation from time. This women had actually been living at the facility for several years.

Feeling bad for the confused woman, Uguccioni said she would try to resolve her issue and offered to get her a drink from the juice cart. Together, they sat and talked for a while until a nurse came by.

“She said, ‘you’re the only person in a week that has been able to get her away from that door,’” Uguccioni recalled, adding that, when word got back to the activities director that she was able to do that, she was promptly transferred from her library job and to a position as a resident volunteer.

Fast-forward to today, as Uguccioni sits as executive director at Linda Manor Assisted Living in Northampton, a facility she has put on the fast track when it comes to growth, vibrancy, and recognition.

Indeed, since arriving in 2015, she has doubled occupancy from 40 to more than 80, and there is now a waiting list.

Meanwhile, Linda Manor has been named the best assisted-living facility in Northampton by both the Daily Hampshire Gazette and SeniorAdvisor.com. Under Uguccioni’s direction, the facility has twice won the Silver Honor Affiliate Excellence Award through Berkshire Healthcare Services.

But it’s not so much what she’s accomplished as how that has earned her the Healthcare Heroes award in the category called Health/Wellness Administrator/Administration.

The ‘how’ boils down to a lead-by-example style and an ability to make each and every team member feel not only valued but a key contributor to the health and well-being of all the residents at Linda Manor.

Nicole Kapise-Perkins, Human Resources manager at Linda Manor, summed this up effectively and poignantly in nominating Uguccioni for the award.

“Emily’s fairness and open, engaging manner has had a huge impact on employee morale, and as a result, the services we provide to our residents and families is rated the best in the Northampton area,” Kapise-Perkins wrote. “She lets her staff members know they are appreciated, and they give 110% on the job.”

One of the first things Uguccioni did when she came to Linda Manor was relocate her office.

She moved it out of the administration “suite,” as she called it, and into an office that any person can see the moment they walk into the lobby. This seemingly innocuous change is an effective representation of one of Uguccioni’s biggest personal goals as both a manager and a leader: visibility.

“I pride myself in knowing all the residents and all the family members here by name. I pride myself in knowing all the staff by name,” said Uguccioni, noting that there are more than 80 people working with her (not for her). “I think I know a lot about the residents themselves in terms of what they like, what they dislike, and what might be a concern for them or their family, which is sometimes very different things.”

This doesn’t sound like the 13-year-old who took a job in the library because she didn’t want to work around old people.

As noted earlier, that chance encounter with the woman looking for someone to pick her up changed the course of Uguccioni’s career — and her life. 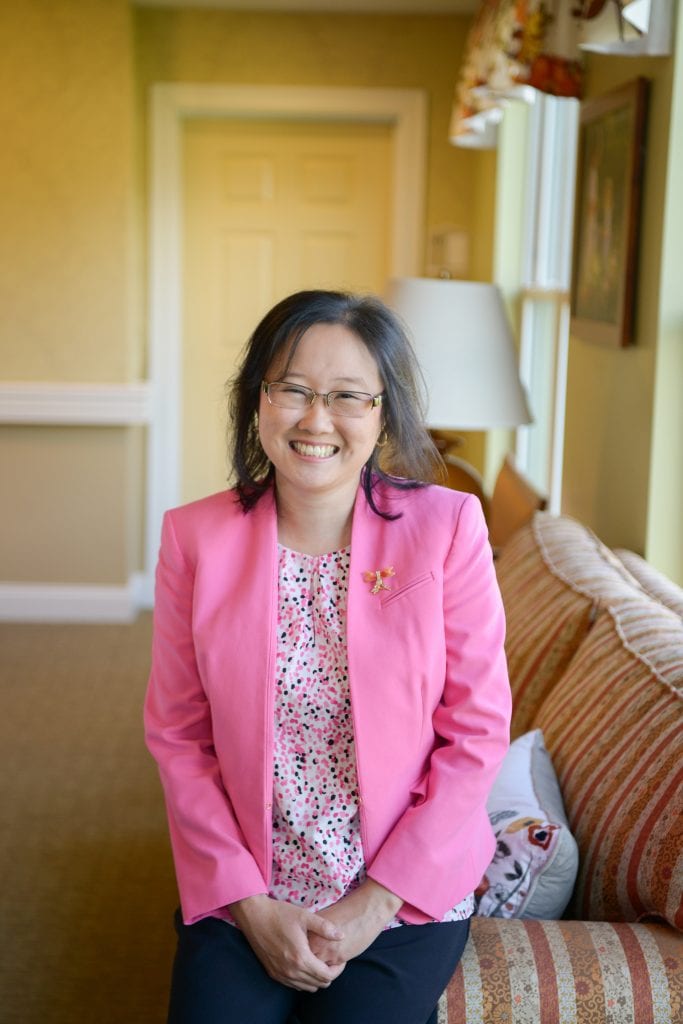 Emily Uguccioni’s goal is to make every team member know they are valued and a key contributor to Linda Manor’s success.

The volunteer experience she embarked upon after transferring out of library lasted three years until she was hired to be an activities assistant, where she worked at night and on weekends.

“When I was there, I got to see the operations of a nursing home, and I got to see what nurses do and how you interact with the residents and how important a long-term care facility is,” said Uguccioni, adding that this prompted her to explore options in healthcare degrees for her college education.

She graduated from Springfield College in 2006 with a degree in health services administration, knowing she wanted to end up at a higher-level administration or perhaps an executive-director position.

After graduation, she served as a therapeutic recreation director and managed the activities department in various assisted-living homes in Connecticut. Most recently, she worked as director of Operations and Services at Seabury Active Life Community in Bloomfield, Conn., a position she was offered when her previous boss left.

She came to Linda Manor just a year after it opened in 2014, and immediately commenced changing its fortunes.

The facility sits next to Linda Manor Extended Care Facility, also affiliated with Berkshire Healthcare Services, which opened in 1989, and Uguccioni immediately recognized opportunities to create synergies and potential growth for both facilities.

“My vision was to create community and to build a campus concept with the extended-care facility so that the community as a whole saw this campus as a place where housing meets healthcare, a unique concept without a buy-in fee that many of the competitors have,” she said. “Because we are not a ‘life-care community,’ the referral flow and process were not already built into the campus of care with a blink of an eye.”

Elaborating, she said that, while a strong, mutually beneficial relationship between the two facilities seemed like a natural outcome, it took time, patience, and diligence to make it work.

This meant months of working with Mark Ailinger, administrator at the extended-care facility, and his team to build a solid relationship.

“That [relationship] was missing, and I could see that right when I got here,” said Uguccioni, adding that was a problem that could have affected several facets of both facilities had it continued. In order for facilities like Linda Manor to be financially stable, Uguccioni told BusinessWest, maintaining a consistent resident census at or above the target, as well as managing controllable operating expenses, are crucial. But, in order to accomplish this, facilities need solid referral sources, and wellness programs and models for the residents. All this comes much easier when you can utilize the resources at the extended-care facility right next door.

So Uguccioni and Ailinger worked together to build trust between the two buildings so that the extended-care facility could become a consistent referral source at the assisted-living facility, and vice versa.

“It is one of my proudest accomplishments since my tenure here,” she said.

But there have been many accomplishments since Uguccioni’s arrival, including those ‘best-of’ awards.

They are generally a measure of customer service, and Uguccioni said she believes quality in this realm is a function of having a staff that knows it is valued and appreciated.

Indeed, it takes a village to run a successful assisted-living facility that leaves residents and their families happy, and Linda Manor does that well by putting an emphasis on relationships.

To help staff members accomplish this, Uguccioni helps them realize the impact they have on residents, and the value they have in affecting their lives.

For example, she said a certified nursing assistant providing daily services to a resident, like giving medication or offering assistance in the bathroom, translates into much more than completing a simple task.

“You’re really here to be an integral part of that person’s day,” Uguccioni said. “You’re the first person that they see in the morning, and, therefore, their interaction with you really shapes how their day might be.”

This, she says, is the key to running a successful assisted-living community.

“If you don’t have a staff that’s committed and engaged, you don’t have anything,” she said. “I think that it’s really important that you have people and staff in general that are invested in their role and they realize the value that they have in assisted living, and what they mean to the people that live here.”

But building a strong, caring team is not an easy task in this employment environment. Uguccioni says one of the biggest challenges in running an assisted-living facility is that not many people seem to want to be aides.

“There’s a lot of open positions in healthcare for certified nursing assistants, and we don’t find as many people seeking that out as a desired level of employment,” she said, adding that she puts staff satisfaction high on her list in order to reduce turnover.

“I don’t ever want someone here to feel like ‘oh, I just work in housekeeping,’ or ‘I’m just the server in the dining room; what do I know?’ Everybody here knows a tremendous amount,” Uguccioni added. “It’s not just me that runs the building, it’s all of us. If one person could do it, I wouldn’t have everybody else that works here.”

This attitude has helped Linda Manor to continue to be recognized as one of the best assisted-living facilities in the area, and Uguccioni is always thinking about ways to improve.

“I’m always looking at how we can positively affect someone’s life through the residents and the families,” she noted, adding that she has positive experiences every day that remind her why she does what she does.

She recalls one instance from a few years ago, while she was covering for someone in the Admissions department while they were on vacation. A woman walked in looking for a place for her mom to live. The minute she sat down in Uguccioni’s office, she began to cry.

“This woman was in a terrible predicament. Her mother lived in a totally different part of the country, and she didn’t know how to talk to her to tell her she couldn’t live alone anymore,” she said.

In this instance, Uguccioni advised the woman not to tell her mom why she couldn’t live alone, but explain how living in an assisted-living facility would help her live an easier, happier life.

The next week, the woman got her mom on a plane and moved her into Linda Manor.

“Being able to help her, I really do feel like I have a pivotal piece to that,” Uguccioni said. “Every time I see her when she comes in, she says, ‘I thank you every day.’”

When she reflects back to that experience she had at the Alzheimer’s Resource Center as a 13-year-old girl, Uguccioni is grateful that the nurse sent her to deliver that paper, because it put her on a path to a career she loves every day.

“If I hadn’t had that volunteer experience doing something that was completely out of my comfort zone, I would never have what I have today,” she said. “I would never be in this field at all.”

But she did go down that path, and doing so started her on her journey to be a Healthcare Hero. 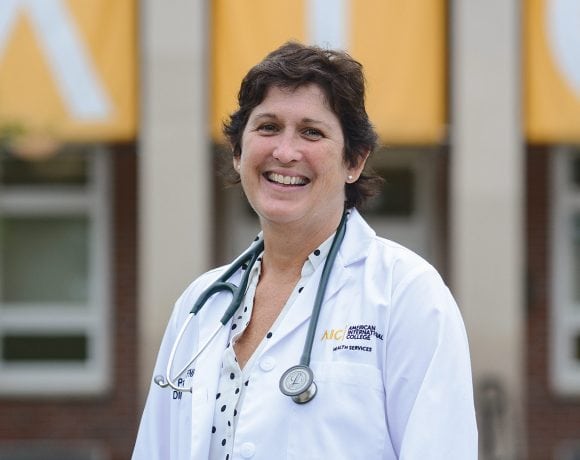 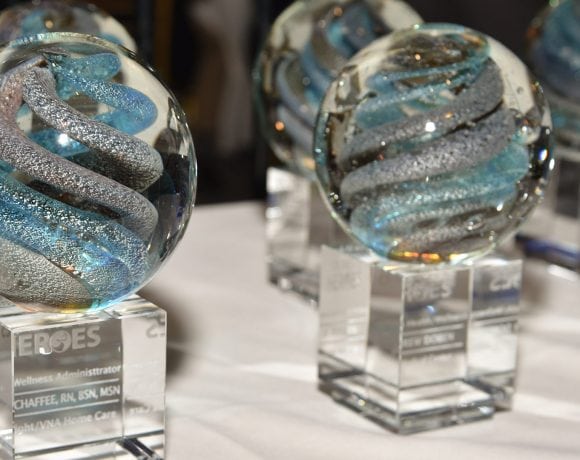 2019 Healthcare Heroes Announced in the Sept. 2 Issue of BusinessWest