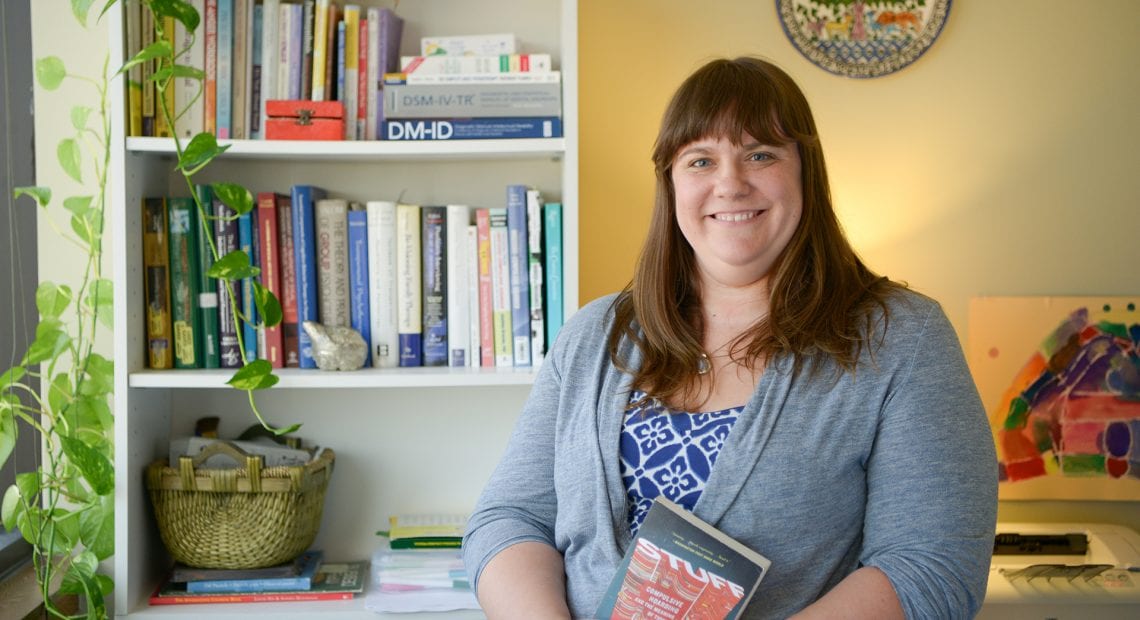 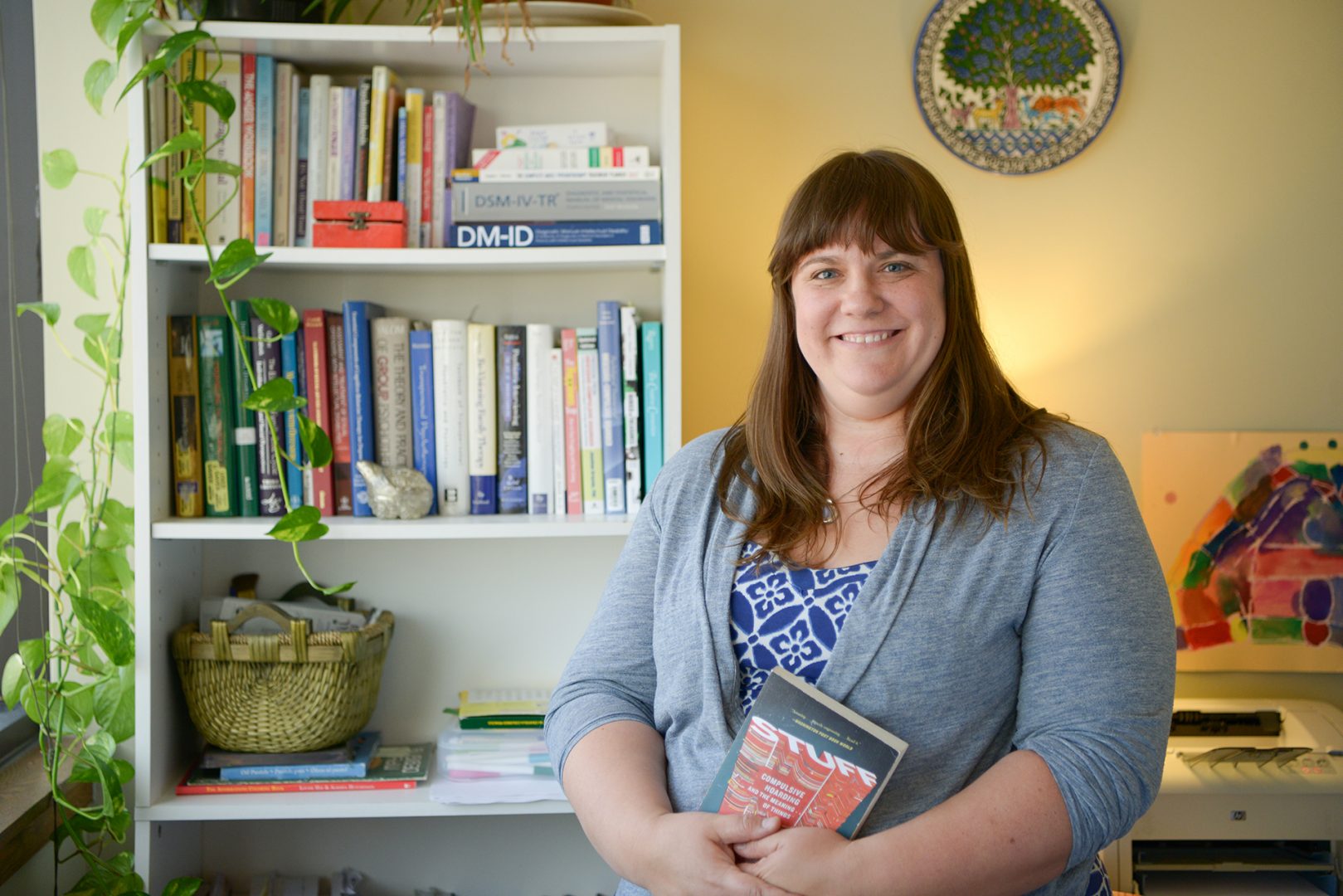 To illustrate one of the many ways obsessive-compulsive disorder, or OCD, can manifest itself, Tara Ferrante said everyone has stood at a rail atop a high building, looked down, and thought, what if I jumped? It’s a little scary, and basically harmless.

“But with OCD,” she continued, “you actually evaluate that thought and think it could happen, and then, ‘I must be a terrible person to have that thought.’ Or it creates anxiety because that thought means something, and you have to do something to feel better.”

OCD often begins as an intrusive thought, she explained, and everyone has intrusive thoughts. What sets OCD sufferers apart, though, is their response to those thoughts. “Sometimes it’s a compulsion, sometimes avoidance — ‘I can’t be in tall places,’ or ‘I can’t be around knives, because I imagined myself stabbing someone once, so I must be a dangerous person. What person must think something like that? I must be a horrible person. People shouldn’t be around me.’”

But while avoidance — or whatever compulsive, repetitive action helps to mitigate that intrusive thought — might bring temporary relief, it also reinforces the initial evaluation of that thought, she went on, “so the next time that thought comes up, you’re stuck in that same cycle where you have to do something to feel better.”

Then there’s the behavior known as hoarding, which buries people, both psychologically and literally, in their own possessions because they’re unable to get rid of anything — presenting a wide variety of dangers.

“It can be a fire risk, or it can be a fall risk, especially as people get older, or someone may have other health issues and the path’s not wide enough for a gurney to get into their house for emergency support,” Ferrante said.

“It also causes people to isolate more — they’re afraid to have people in the home, or to reach out to people,” she went on. “There’s a thing called clutter blindness, where they might not see all the clutter, but when another person is there, it’s striking. There’s the shame and the guilt and everything else that comes up around that, so a lot of people do isolate more because of the clutter.”

Ferrante is program director of the Holyoke Outpatient Clinic at ServiceNet, one of the region’s largest behavioral-health agencies, and treats patients with a wide range of behavioral-health conditions. But it’s her work leading ServiceNet’s OCD and Hoarding Disorder Program that earned her recognition as a Healthcare Hero in the category of Emerging Leader.

To be sure, Ferrante doesn’t see herself as a hero — just someone passionate about helping people overcome behaviors that range, depending on the patient, from mildly annoying to completely debilitating.

“It feels so good to see people thriving in their lives who wanted to die at points,” she told BusinessWest. “While their lives may not be perfect by any means, they’re able to live their lives the way they want to, with much more ease.”

Ferrante’s journey in this specialized field began while working with a client who was experiencing extreme distress from OCD symptoms. She had read about emerging OCD treatments, learning that the most effective approach seemed to include a mix of structured clinical treatment and home-based and peer support.

So, two years ago, when ServiceNet’s senior leadership proposed the launch of an OCD program in Western Mass., she jumped at the opportunity to lead the program.

“They saw this area as a kind of desert in terms of people who can really specialize and are able to provide good care to people with OCD and hoarding disorder,” she explained. “I was super interested, and I expressed interest in overseeing it.”

“It feels so good to see people thriving in their lives who wanted to die at points. While their lives may not be perfect by any means, they’re able to live their lives the way they want to, with much more ease.”

Before launching the program, Ferrante and fellow clinicians first completed four days of training in OCD and hoarding disorder, then conducted a series of consultations with two nationally recognized experts on these conditions: Dr. Randy Frost, a professor of Psychology at Smith College, and Denise Egan Stack, a behavioral therapist who launched the OCD Institute at McLean Hospital in Belmont, a Boston suburb.

“We’ve been so lucky,” Ferrante said. “People have invested so much time and energy in our program to get it off the ground and get it going and helping me as a leader. It’s been really great.”

Currently, six ServiceNet clinicians provide specialized OCD and hoarding-disorder treatment at the agency’s Holyoke, Greenfield, and Northampton clinics. The program’s model continues to evolve, but several facets have crystalized, including the use of Smith College students as interns in the program. Frost trains the students for adjunct work in the community, such as conducting ‘exposures’ with clients battling OCD, Ferrante explained.

“They’ll give emotional support to people [with hoarding disorder] as they are sorting and discarding, or as they go out and practice non-acquiring — going to a store where they like buying things, and then not getting anything, sort of building up the tolerance of resisting that urge.” 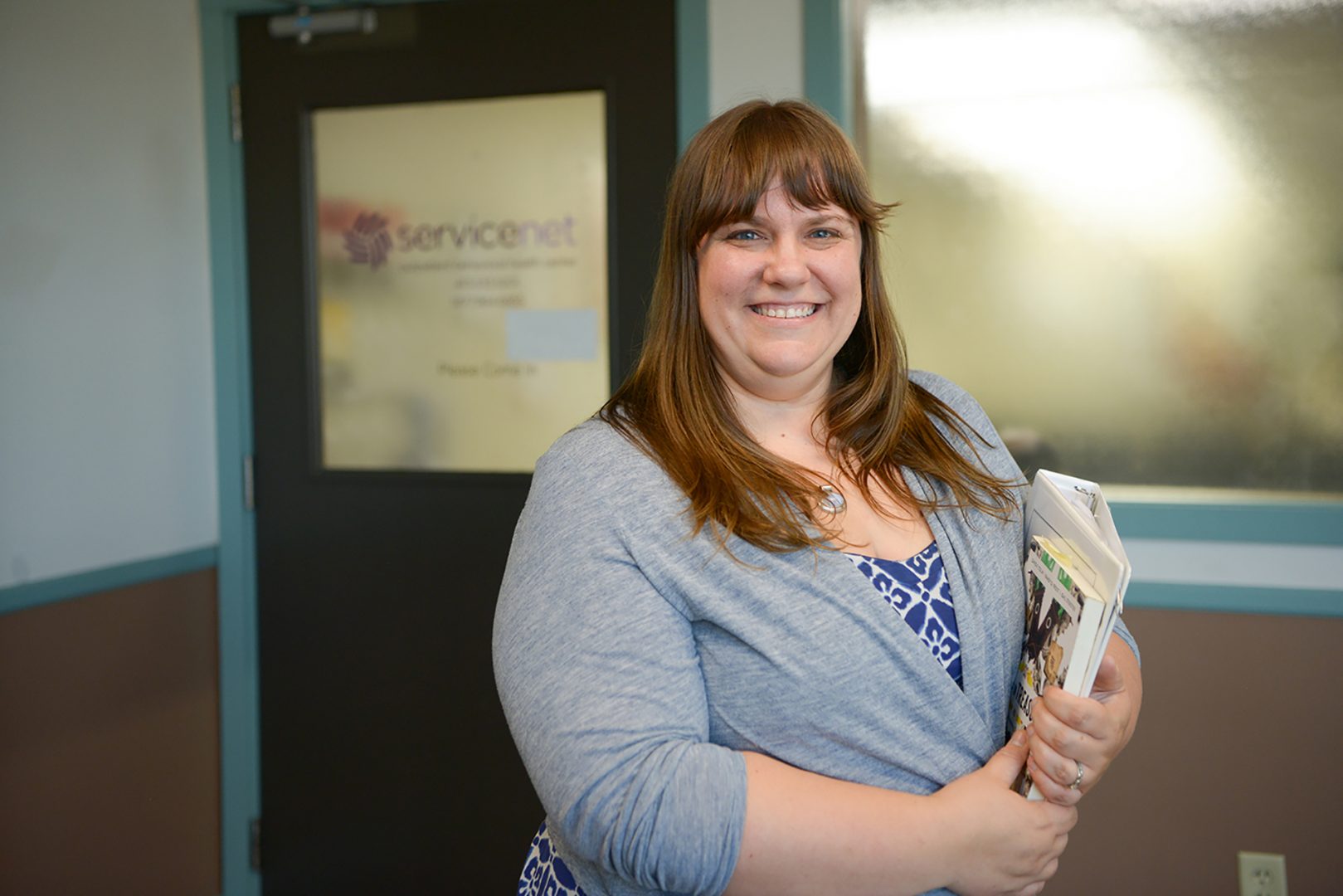 The student collaboration has been valuable and productive, she noted. “We’re limited in how much we can get out into the community or into the home between sessions. The introduction of the interns has helped create steady progress.”

The term ‘hoarder’ is actually out of fashion, she noted, having taken on a stigma in recent years, thanks partly to TV shows that often vilify those who struggle with the condition. Frost has written extensively about the reasons people hoard; some call themselves ‘collectors’ or ‘finders-keepers’ because they see value in every item in their cluttered homes.

Hoarding is also a form of perfectionism, at least in the eyes of collectors, she went on. “You want to use something to its full ability, or it needs to go to the just right place. Or, if it’s going to be given away, it needs to be given to just the right person who’s going to love it fully, and if you can’t find that person, then you’re just going to keep it, and that can stall progress sometimes.”

As for OCD, like many mental-health conditions, it can differ in severity from one person to another, Ferrante said.

“Sometimes people can function pretty well, but even for those people who aren’t seeking treatment, it can affect their ability to have relationships, to get to work on time, even to leave their house,” she explained. “There are so many ways it can make people’s lives difficult. And even if they can function sometimes, they’re living in this constant state of anxiety and panic, which is really unpleasant.”

Then there are the more severe cases — stories of people unable to touch their children or their partners for years, or unable to leave their home, hold a job, or participate in life in any way.

The standard treatment in Ferrante’s program is known as exposure and response prevention, a form of cognitive behavior therapy.

“We form a relationship and create situations where they get exposed to the anxiety, the intrusive thought, and we don’t do the compulsion,” she explained. “We do it in a supported way at first, in session, and then we have the interns who can do that out in the community, and eventually we want people to do it on their own. We make exposure part of life — this idea of, ‘let’s turn toward anxiety rather than away from anxiety.’ It takes the power out of it, and they’re able to really start living their lives the way they want to be living.”

Many patients are treated with a combination of therapy and medications, often anti-depressants. “But not everyone needs meds,” she said. “I see a lot of positive outcomes with just exposure and response prevention on its own.”

The ServiceNet program runs a series of support groups called Buried in Treasures, named after a book Frost co-authored. Ferrante also sits on the board of the Western Massachusetts Hoarding Disorder Resource Network, which puts on conferences that focus on what resources are available in the community for those who struggle with the condition. ServiceNet also brings in experts for lectures where mental-health professionals can earn CEUs for learning more about hoarding and OCD.

All this training is aimed at broadening resources for a patient population that cuts across all socioeconomic barriers and cultures around the world. Hoarding, in particular, is often seen as an older person’s condition, but that may be because they’ve had more time to accumulate, so the signs are more readily apparent.

Progress in overcoming a compulsion to hoard can be slow, Ferrante added. “That stuff didn’t get in the home overnight, and it’s not going to get out overnight. I mean, it can get out of the house overnight, but that generally is going to make things worse — it creates a trauma, it makes the person treatment-resistant, and doesn’t actually address how it all happened.

“It’s almost a guarantee, if someone has a forced cleanup, they’re going to fill their space up again,” she went on. “So we take a slower approach that looks at what got someone there and creates the skills they need to declutter on their own, and not have it return.”

While people who hoard often struggle with stigma, OCD sufferers are plagued with the opposite: the many Americans who think they have OCD because they have certain routines, and proclaim it with an odd sense of pride.

“They say, ‘oh, I’m so OCD,’ and it really minimizes it for people who are suffering,” Ferrante explained. “It’s not just being really clean or wanting things in a certain order. If those things are torturing you and you can’t function, sure, but people can have certain obsessions or compulsions and not have OCD. The ‘D’ part of OCD is that it’s impairing your ability to function, and most people who say, ‘I’m a little OCD’ … well, they’re not.”

On the other hand, it’s also frustrating for someone with OCD to be misdiagnosed, she added.

“I get calls from people saying, ‘I’ve been looking for help forever; no one knows what I’m talking about.’ Sometimes, when people think they’re dangerous because of an intrusive thought, then a therapist buys into that because they’re not sure what this is, and it reinforces that belief. But even suicidal thoughts can be OCD. People can get hospitalized when that’s not the right intervention. You want an expert making sure you’re making the right call there.”

Outside of her OCD and hoarding work, Ferrante continues to manage all the clinicians at the Holyoke clinic, and handles a caseload of about 15 patients at a time, dealing with a wide range of mental-health concerns, from substance-use disorders to trauma, anxiety, and depression. In that sense, she and her team were already doing heroic work before launching the OCD and Hoarding Disorder Program.

But since that launch, she’s been able to help a patient population that often finds it difficult to access resources — and wind up suffering in silence, and often falling prey to other conditions; in fact people who hoard are 80% more likely than the general population to develop depression.

“It’s amazing to see people get better,” she told BusinessWest, whether progress occurs quickly or not. “It’s not always simple — sometimes there’s more than just OCD going on, and it’s more complicated. But if people are coming in, they’re already motivated to do the work, and progress can be pretty quick.”

She thinks of the client who inspired her interest in OCD research, and said “it blows my mind” how far he’s come.

“It’s so, so great when people graduate and don’t need therapy anymore. To see even small progress — people being able to do things they couldn’t do before — makes my job totally worth it.” 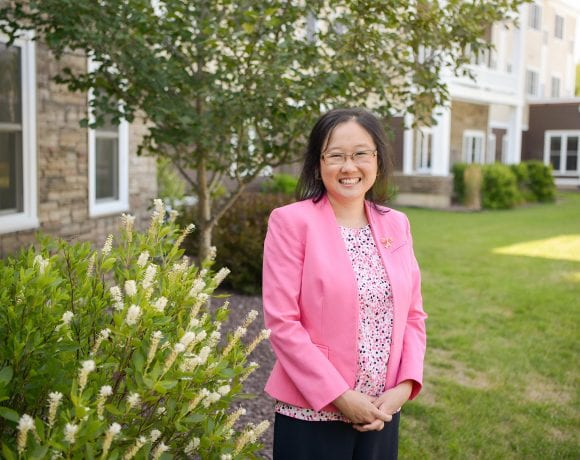 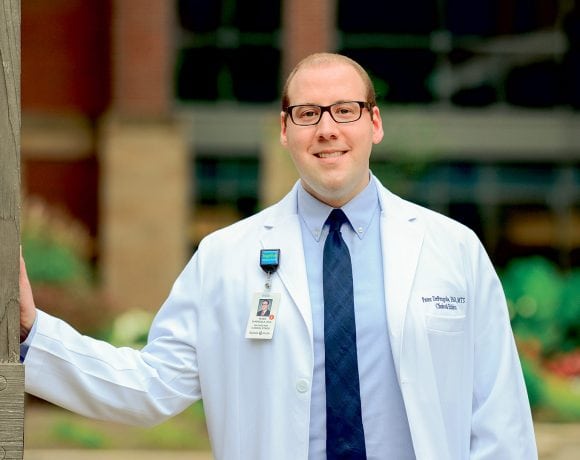