Massachusetts lawmakers are attempting a novel approach to pregnant workers, by requiring employers to offer them accommodations similar to those given to disabled workers. The bill is a popular one and seems assured of becoming law, but some questions about implementation — and what companies will have to do to comply — remain.

Pregnancy is not a disability, and the Pregnant Workers Fairness Act doesn’t classify it as one.

But if the bill, passed unanimously by the Massachusetts House of Representatives in March and expected to sail through the Senate, becomes law — Gov. Charlie Baker has said he will sign it — employers will be required to offer the same types of accommodations disabled workers are promised under the Americans with Disabilities Act (ADA).

“While this bill doesn’t technically classify pregnancy as a disability, per se, it does create the requirement that employers treat pregnancy the same way they treat employees with a disability, providing reasonable accommodation and undertaking a dialogue about what those accommodations should be,” said Daniel Carr, an attorney with Royal P.C. in Northampton.

If the bill becomes law, an employer would not be able to fire, demote, or deny a job to a worker due to pregnancy. The employer could not force the worker to accept certain conditions or take a leave from the workplace as long as she were able to perform the essential functions of her job.

While charges of discrimination based on pregnancy or maternity are currently considered an aspect of gender discrimination, the new bill changes the playing field in potentially significant ways, Carr noted. 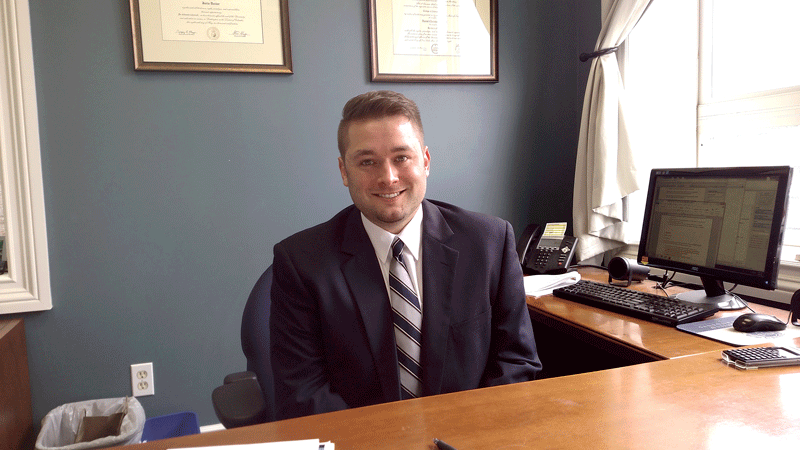 Daniel Carr says the bill currently leaves several questions unanswered, which he hopes will be addressed by the state Senate before heading to the governor’s desk.

Specifically, employers will be required to engage in an interactive process with pregnant employees to provide reasonable accommodations, such as more frequent and/or longer breaks, modified equipment or seating, job and responsibility restructuring, modified schedules, and private, non-bathroom space to express breast milk — accommodations that, in the abstract, seem like a logical recognition of the need to provide equitable conditions for pregnant women in the workplace.

“Generally speaking, everyone is in agreement,” Carr said, “but for this bill to become law, there are some issues that need to be ironed out, hopefully before it gets to the governor for his signature.”

Meghan Sullivan, managing partner at Sullivan, Hayes & Quinn, LLC in Springfield, noted that the ADA provides no basis for equating a normal pregnancy with a disability, but Massachusetts lawmakers have, for several years, been discussing the idea that some of the same accommodations available to disabled workers, particularly related to changes in their duties and working conditions, could also benefit pregnant workers.

One of the reasons the bill has found little legislative resistance so far is that it was crafted with significant input from both women’s rights groups and the employer lobby, notably Associated Industries of Massachusetts (AIM).

“I sit on the steering committee for AIM, and they took the position that this was not a bill they were going to oppose on behalf of employers,” Sullivan said. “But how do we approach the idea of reasonable accommodation while avoiding issues that are typically problematic for employers?”

Working out many of those issues was key to moving the bill forward, but, as Carr noted, plenty of unanswered questions remain.

AIM opposed early versions of the bill during the 2015-16 legislative session because employers worried it gave employees unlimited power to reject multiple and reasonable offers of accommodation by an employer. The compromise bill addresses that concern and others, the organization noted. Specifically, it accomplishes the following:

• Provides clarity regarding definitions and terms related to current employees in need of accommodations related to pregnancy;

• Aligns state and federal laws regarding reasonable accommodation as it relates to the essential functions of the job;

• Provides flexibility rather than mandating specific types of accommodations for employers and employees;

• Provides a reasonable mechanism for employees and the employer to achieve a reasonable accommodation by engaging in a defined process, eliminating a concern by businesses that an employee could reject multiple reasonable offers of accommodation;

• Adds language allowing the employer to evaluate undue hardship of an accommodation and the ability of employee to perform the essential functions of the job as it relates to an employer’s program, enterprise or business;

• Provides opportunity for an employer to request documentation for certain cases to ensure that accommodations are reasonable for both employees and employers;

• Limits provisions to current employees instead of employees and job applicants;

• Reduces unnecessary burdens and allows for electronic or other means other than a “poster” for notifying employees; and

• Allows for certain accommodations to be either paid or unpaid.

Employers worry, Sullivan told BusinessWest, about any new legal protections for workers that are different, and sometimes conflicting, with existing laws — conflicts that are typically hashed out through litigation, which companies certainly want to avoid. 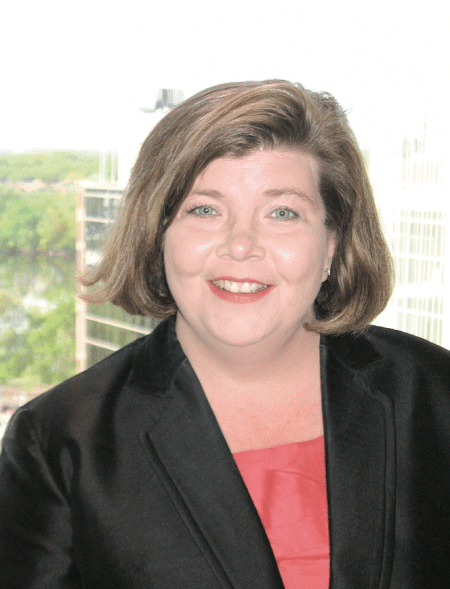 Meghan Sullivan says the bill was crafted after much negotiation and compromise between women’s rights advocates and employer organizations.

“There was an incredibly cooperative approach to drafting the bill passed by the House, an effort to use very similar language and concepts related to the disability laws as we know them,” she noted.

She recalled a summer job she had during her college years, as a bank teller. She was required to stand at her workstation for eight hours, but under the Pregnant Workers Fairness Act, an employee would have a strong argument that allowing her to sit while serving customers would not hinder her from getting her work done.

“The problem with any legislation is that sometimes the most popular laws are the worst-drafted,” he noted. “I think every reasonable person agrees with the principles of this law, that pregnant employees shouldn’t be discriminated against. No legislator wants to be seen as against it, so no one’s really changing it — but there are issues with this law that come into play.”

Take the coffee shop across the street from Carr’s office, which employs a handful of workers in one open space, with a bathroom. Where, exactly, can that business designate a private, non-restroom space for expressing breast milk? If an employee brought litigation, he argued, the shop would have a strong argument that such a private space doesn’t exist, and it would be an undue hardship to somehow construct one.

“Another issue is job restructuring. If an employee walks into my business and says, ‘we have to restructure my job because the law says so,’ how can I prove that’s an undue burden or financial hardship to do so?” he said. “That’s my concern. It’s not the wisdom of the law in general; it’s the drafting and details that have to be addressed.”

In a recent blog post, Carr went so far as to say the bill, if passed as is, will cause chaos for employers, for a couple of reasons. One is that it has no specified effective date, and would therefore, by default, become law only 90 days after Baker signs it.

Another question is the duration of accommodations. “The lactation provisions imply that the accommodations can continue after an employee has given birth,” he noted. “However, the bill does not address for how long after giving birth an employee is entitled to reasonable accommodations. As drafted, employers have no way of knowing if they must provide modified schedules and/or job restructuring to new mothers for four weeks, four months, or four years. It would be in every employer’s best interest to undertake a self-assessment of their readiness to implement these policies sooner rather than later.”

Carr also noted that the Affordable Care Act — which, despite GOP attempts to kill it, is still the law — already provides for private, non-bathroom space to breastfeed in certain situations, and other protections exist for breastfeeding employees. However, the new bill will apply to more employers in the state, and may be interpreted more broadly.

“The term ‘job restructuring’ worries me the most,” he said. “So if the breastfeeding provisions of this law are interpreted to be consistent with the breastfeeding protections of the ACA, does that mean that job restructuring would continue for a full year? Or, if [the new bill] is interpreted to provide greater duration, how long would that last?”

Sullivan agreed that the vague concept of accommodation could become more significant than employers expect, especially if the worker experiences complications with the pregnancy.

“It’s potentially a new lawsuit, and it’s something employers will have to take note of, but the two sides, as well as legislative officials, worked very cooperatively and diligently to make sure it would be a manageable and workable process,” she noted. “A lot of employers are concerned about any new law being introduced: ‘how do we manage another accommodation on top of all the other ones that already exist, and how do these new legal provisions interact with all of the existing laws?’ Without a doubt, it’s another instance where HR and managers and supervisors are going to need education and training so there isn’t an inadvertent violation.”

If employers will have only a few months to get up to speed with compliance, as appears to be the case, Sullivan said, every employer will have to examine the company’s workplace rules, break-time rules, and other details so they can anticipate what policies might need to be modified if an employee becomes pregnant.

She stressed, however, that employer groups understand the bill’s appeal.

“It is easy to confuse opposition to a draft of a bill with opposition to the issue itself,” AIM President Richard Lord said just before the House passed the bill. “AIM is always willing to work with those seeking honest and effective compromise. That is exactly what happened with this legislation.”

That doesn’t mean it’s easy to add another layer of employee protections, of course.

“A common concern is that Massachusetts will not be competitive enough with other states that aren’t as accommodating to employees,” Sullivan told BusinessWest. “At what point will Massachusetts create an incentive for businesses to leave? That’s always a concern among employers, the cost of doing business.”

Still, she said, “despite the rhetoric of ‘us vs. them’ that’s so common in the political landscape, so many employers are motivated to do the right thing and do it in the right way.”

Even if they’re still hazy on the details.

The Power of Choice 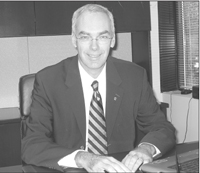 Credit Where Its Due