A rendering of the new Florence Bank branch in West Springfield.

After recording impressive growth during his 22-year tenure as president, John Heaps Jr. says Florence Bank is ready to take the next strategic step, by opening its first branch in Hampden County later this summer. The move comes at an opportune time, he said — a time when many Greater Springfield banks are being bought up and merging with institutions based well outside the region. A community-focused bank like Florence, he believes, is well-positioned to fill the gap.

“For me, it’s like coming home,” he said. “I grew up here in East Forest Park, and I’ve lived here all my life. So this is home to me, and coming here is just something that feels like coming back home, even though I live here.”

But as much as the move means to him personally, it says more about the bank’s growth, and the opportunities available to a community-focused institution in the midst of industry consolidation that has left the region without a Springfield-headquartered bank.

“The first part of my career with Florence Bank was focused on expanding within Hampshire County, and now it just makes sense to expand into Hampden County,” said Heaps, who has served as the bank’s president since 1995. “Because of the significant consolidation, many of the independent players are gone. There’s a real need for a community bank. People want banking decisions made locally, by local people and for the right reasons. That’s what we do.”

Construction is nearing the final stages at what will be a 9,000-square-foot plaza at 1010 Union St., one-third of which will house Florence Bank’s new Hampden County Banking Center, scheduled to open this summer.

All Florence Bank services will be offered through the new center, including deposits and loan products, mobile services to provide 24-hour access to accounts, mortgage-application services, debit-card issuance, commercial-loan capacity, and investment services. The center, which will also offer a drive-up ATM and night depository, will be staffed by eight employees, led by Branch Manager Maureen Buxton.

“The Springfield area needs our kind of independent institution,” he said, and the bank has already found success in Hampden County following its opening, in 2007, of a loan-production office in West Springfield. It’s success helped boost the bank’s total commercial-loan portfolio to more than 36% from Hampden County-based businesses.

In fact, between the loan center, an ATM in Springfield, a relationship with the Basketball Hall of Fame, and employees — like Heaps — who live in Hampden County, the bank already boasts nearly 3,000 retail customers and more than 400 commercial clients in the Greater Springfield region. The bank also has a relationship with 97 nonprofits in Hampden County that have received over $300,000 in grants and gifts in the past five years.

In short, Heaps said, the time was right for the West Springfield branch.

Florence Bank, headquartered in its namesake town, has long been a Hampshire County institution, with branches in Amherst, Belchertown, Easthampton, Granby, Hadley, Northampton, and Williamsburg. Heaps has seen the bank grow in his tenure from a $250 million institution with two branches to $1.3 billion and 10 branches. But growth didn’t mean abandoning the community culture.

“It was clear the bank wanted to stay mutual and wanted to grow, and quite frankly, we did that in Hampshire County,” he said. “Our capital has grown from $25 million to $135 million, which is really nice growth, so we’ve been extremely profitable while still being able to keep our focus on what we wanted, which was to stay mutual.” 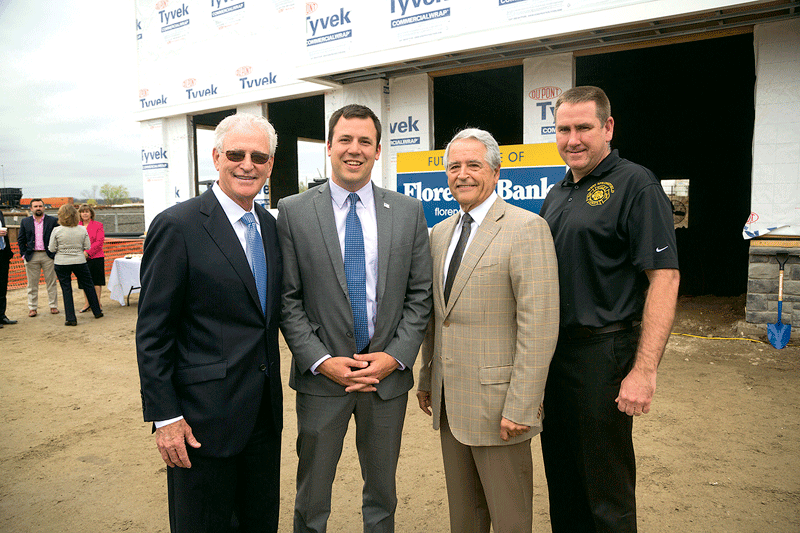 From left, John Heaps Jr., West Springfield Mayor Will Reichelt, developer Frank Colaccino, and West Springfield Fire Chief Bill Flaherty were among those who attended a recent hard-hat tour of the site.

Another goal was to stay current with technological trends, he added. “We’ve got the best of both worlds; we’ve been able to keep the focus on customer service, but we’ve also added technology that has allowed us to keep up with the Bank of Americas. There’s nothing you can get there that you can’t get at Florence Bank, things like mobile management to get into your bank account, stop a debit card, pay bills, things like that.”

In fact, in the past five years, the percentage of customers using the bank’s mobile services has risen from about 5% to around 40%, and it’s still on the rise, among all demographics.

“Sometimes it’s just a matter of showing people,” he said. “If you come in the branch to talk about mobile banking, we’ll give you a $5 deposit check, and we’ll ask you to deposit it to set up your account. You wouldn’t believe how many people thank us for that.”

Customers aren’t the only ones with questions, however. “Strategically, other senior managers and even the board asks about bricks and mortar, why we continue to build branches when transactions have gone down in the branches,” Heaps said. “Clearly, the number of transactions has gone down significantly in the past five years — to around 60% of what it was. That obviously has an impact.”

But a physical branch still plays a critical role in the communities where a bank operates, he went on, not only because the majority of customers still do business there, but because it shows commitment to a city or town.

“Do you need 10 tellers? No, but you certainly need the branch,” he said, adding that branches of the future are likely to be smaller than in the past, and division of roles between tellers and customer-service professionals at Florence Bank will be blurred, with employees able to handle either task, so the teller window, or pod, will be a one-stop shop of sorts. 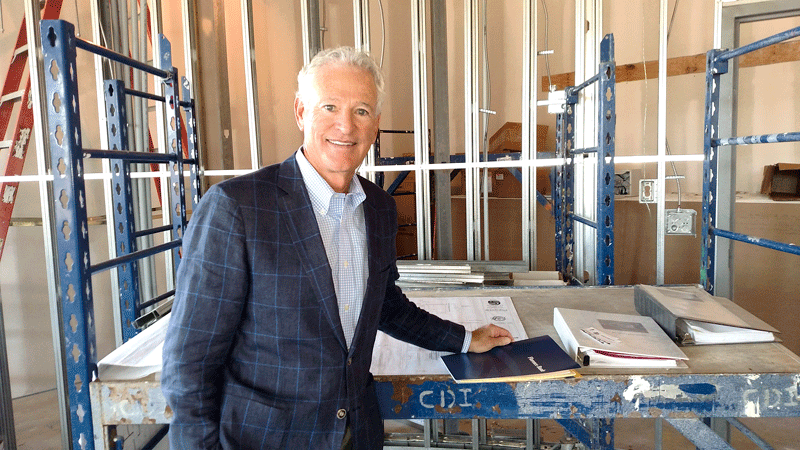 John Heaps Jr. stands before what will be the teller pod area in the new West Springfield branch.

“That’s the teller of the future, and it allows you to have a smaller footprint, and to do everything with much fewer people,” he said. “With remote capture, customers don’t even need to go to the bank to make deposits.”

The result, he said, has been a streamlined workflow, so as the bank has grown in size, it hasn’t added many employees, instead shifting roles to boost efficiency. A branch like the one in West Springfield, had it opened a decade ago, would have required more staff and a larger footprint, he noted.

To create the new space, the Colvest Group of Springfield is developing the new building where St. Ann Roman Catholic Church was once located, at the intersection of Union Street and Memorial Avenue.

The building’s exterior will feature stone wainscoting on the first few feet near ground level and tan siding and multiple windows across the front. Florence Bank will occupy one-third — or 3,000 square feet — of the new plaza, and up to three additional commercial tenants will fill the remaining space, said developer Frank Colaccino.

“We certainly think it’s a high-quality location, and the building is very attractive, he added. “We’re excited to have Florence Bank as our anchor tenant, and we’re confident we’ll have some good-quality tenants in addition to Florence Bank.”

It’s the same promise Heaps sees in the site and, more importantly, in the Greater Springfield region.

“There’s just so much happening in Hampden County,” he said, adding that the region’s economic vibrancy is reflected in Florence Bank’s steadily growing loan activity there. He noted that, at a time when mergers and acqusitions are the order of the day, retail and business customers are still looking for a community-bank experience and a financial partner across all aspects of life. “Eighty percent of our mortgage customers have checking accounts with us; that’s an amazing statistic.”

Which is why West Springfield is just the first stop along the way to the bank’s goal to become much more than a Hampshire County institution.

“It’s not just going to be one branch, just sticking our toe in the water,” he told BusinessWest. “Over the next three or four years, we’ll be adding between three and four new branches as part of a strategic move. I think Hampden County is ready for us, and we’re ready for Hampden County.”