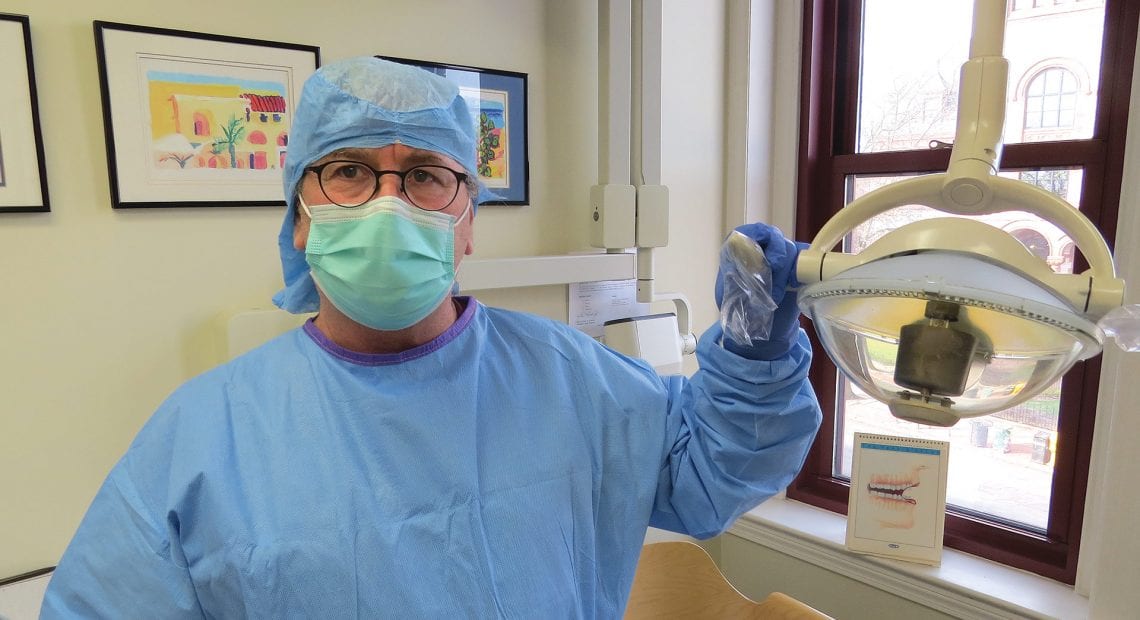 For This Dental Practice, COVID Has Brought Myriad Challenges 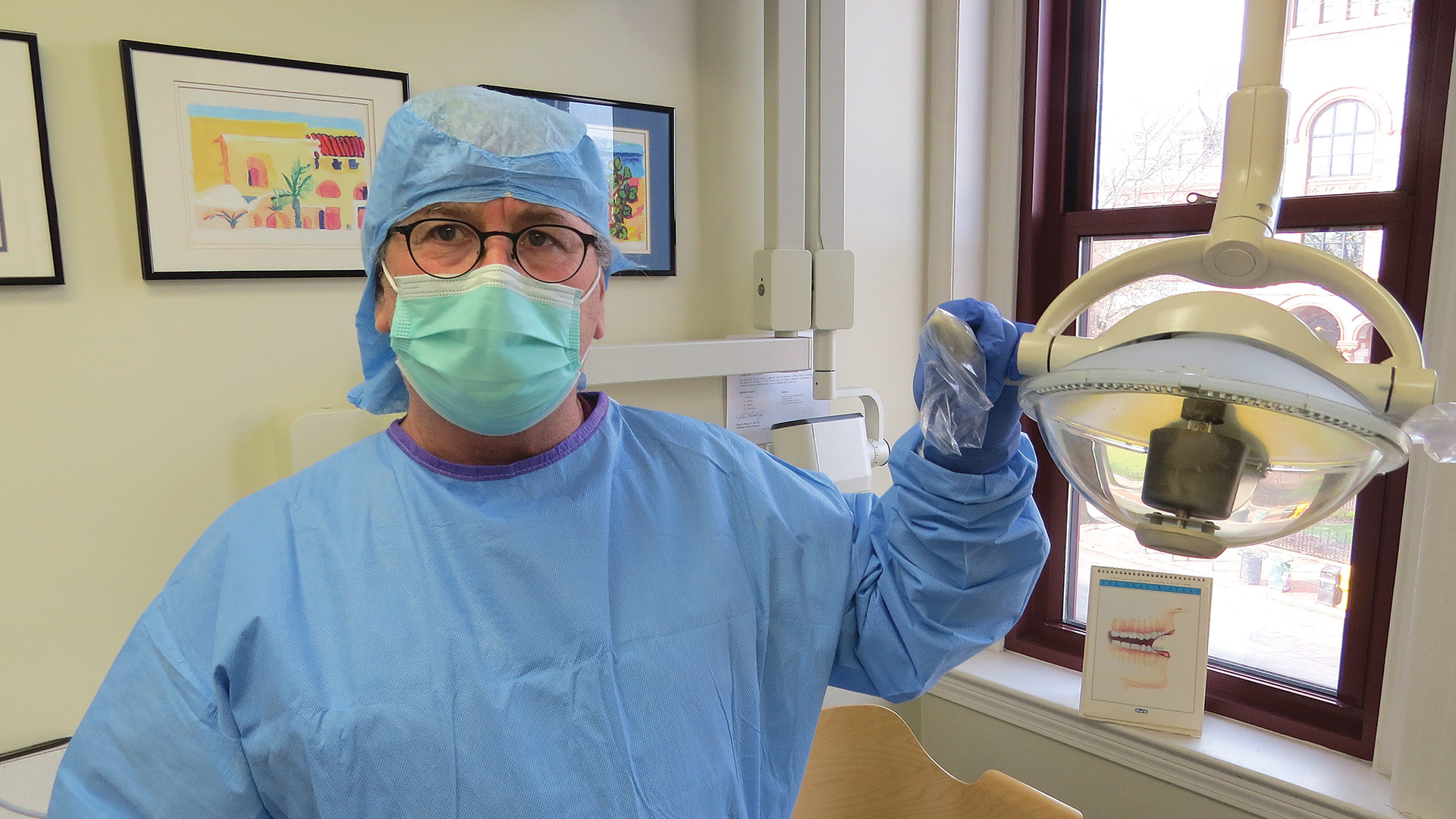 Dr. Ronald Goldsher says COVID has brought a host of new challenges for his practice, but also some rewards in the form of being able to help patients in need.

In many ways, Dr. Ronald Goldsher says, dentists and periodontists were better-prepared for COVID-19 than many others in healthcare, and certainly most business owners not in that sector.

“In some respects, dentists are way ahead of the curve because of what happened years ago with the AIDS epidemic,” said Goldsher, owner of Pioneer Valley Periodontics, which operates offices in Northampton and Greenfield. “At that time, there were a lot of mandated changes in infection control, so we’re used to sterilizing everything, using barriers on equipment, wearing masks, and disinfecting surfaces between patients; we may have ramped things up a bit [since COVID], but we were used to doing all that.”

But being better prepared certainly didn’t mean Goldsher and others in this profession were fully prepared for all that COVID-19 would throw at them — from the trepidation of patients to seek needed care to the equipment that would have to be purchased (from PPE to special air filters) to keep staff and patients safe; from confusion regarding what procedures could be carried out (and when) to the sharp reduction in overall business volume.

Add it all up, and it’s been ultra-challenging and even unnerving, said Goldsher, before adding quickly that it has also been rewarding at times. Indeed, to be open and able to provide needed services to those in need, especially those with emergencies, has been gratifying, he told BusinessWest.

“Every day, I have patients thanking me for being open and doing what I’m doing,” he said. “Some people tell me stories about how they have food delivered outside their home, their mail goes into plastic bags and they wait several days until they open it, they don’t exchange any money and they don’t leave their house — but they come to their dental appointment because it’s been eight months, and they used to come every two or three months to get their teeth cleaned, and they haven’t had a cleaning in a year. They’re so happy we’re open and providing this service, and, in their words, we’re taking risks to see patients. That’s brings a lot of lot of joy to my practice and my staff.”

Playing back the tape from a trying 2020, Goldsher said he was skiing in Colorado in late February as the news about the virus started to intensify. By the time he returned in early March, things were still normal, but soon began to change in a profound way — for both his business ventures; he and his sons also operate the entertainment venue Hawks & Reed in downtown Greenfield.

“In some respects, dentists are way ahead of the curve because of what happened years ago with the AIDS epidemic.”

Hawks & Reed had to close down, as all indoor performance venues did, and the periodontal office did as well, starting March 13.

“We shut down for what we thought would be two weeks, and two weeks turned out to be almost three months,” he explained, adding that the green light to reopen came in late May, only to have that date come and then be moved back another week, forcing the practice to reschedule a number of appointments and inconvenience several patients — and staff as well.

“There was a lot of confusing information, even when were ready to reopen Pioneer Valley Periodontics; the timelines that were given us by the governor were convoluted and confusing,” he said, noting that these adjectives also describe the information coming out about which procedures fell into the category of ‘essential’ — those that could be undertaken at that time — and which ones didn’t.

But gaining clarification on such matters was just one of the struggles, he went on.

“We were available on an emergency basis, but that comes with a lot of other issues,” he explained. “Like having staff that can come in in an emergency — they can’t be there all the time — and preparing the office for those emergencies.”

As noted earlier, Goldsher said dental practices in general were in some ways better-prepared for this pandemic because of safety measures that have been in place for some time. And his practice was even better-prepared than that in some respects because of the way he had stockpiled PPE over the years.

“I had thousands of surgical gowns that I collected over the years from doing implants,” he explained. “They come in a pack — there would be four or five in a package; we’d use two, and there would be two or three left over. The staff would always say, ‘let’s just throw these away,’ and I would say, ‘put them in a bag.’ We had garbage bags filled with gowns, so we were able to donate several thousand of them to Baystate Franklin Medical Center.”

Still, the pandemic has tested this practice in myriad ways, he went on, speaking for all those in healthcare when he mentioned everything from maintaining adequate staffing to coping with sharply reduced patient volumes, to simply dealing with all the unknowns, not to mention the emotional trauma of seeing patients in the middle of a pandemic.

“Despite all those precautions we were taking, it was still a little unnerving, and it took a couple of weeks for people to settle down because the psychological impact of the virus was there; you can’t see it, but it’s there,” he noted, adding that the spouse of one patient treated by the staff developed COVID-19 and eventually died.

As the calendar turns to 2021, the practice is coping with patient volumes far below what would be considered normal, said Goldsher, mostly due to a fear factor that has always been prevalent, but has kicked into an even higher gear amid the recent spike in cases.

“Patients will cancel at the very last minute depending on the news of the day,” he told BusinessWest, adding that overall revenues are down probably 35% or more for the year, this on top of all those additional expenses. “And from the top levels on down, there has been a lot of confusing information that’s been disseminated.”

He’s not sure when something approaching normal will return, but he does know that challenges remain and it will be some time before there is significant improvement for those in the field.

As he said, being better-prepared certainly helped, but it didn’t fully prepare anyone for what this unforgettable year has brought. 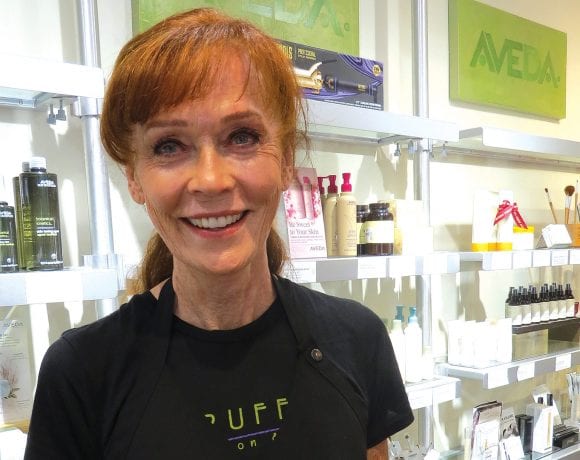 Shaking the Pillars of the Local Economy 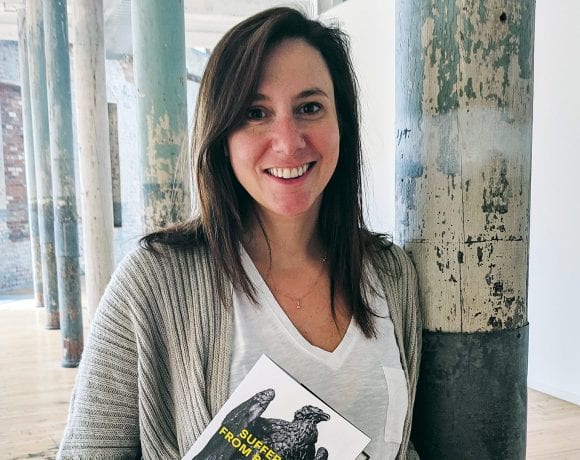