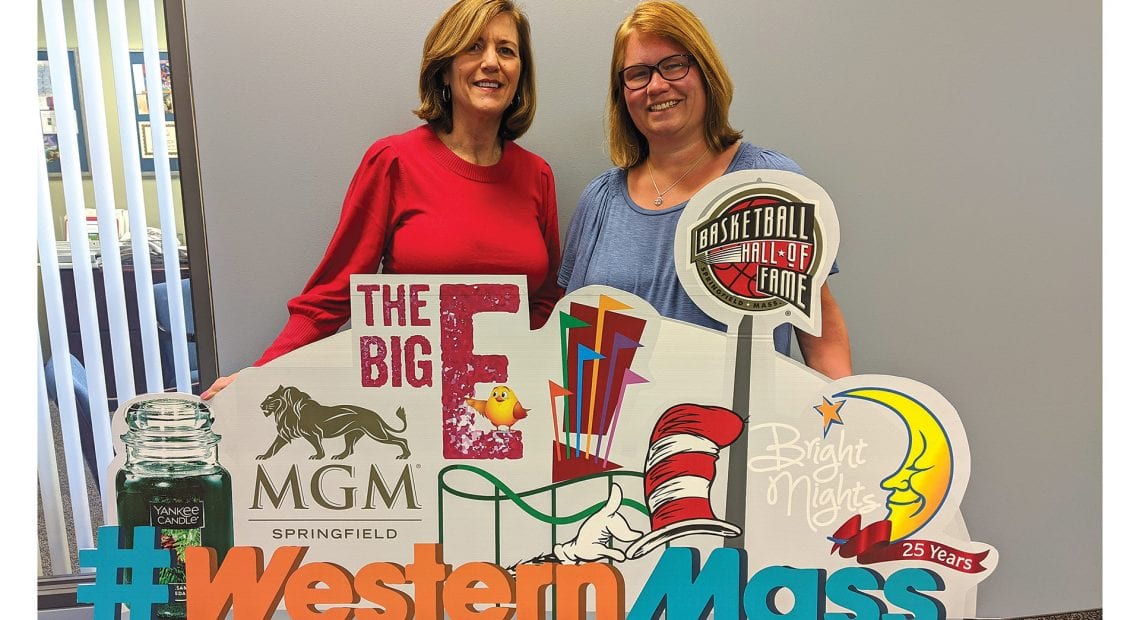 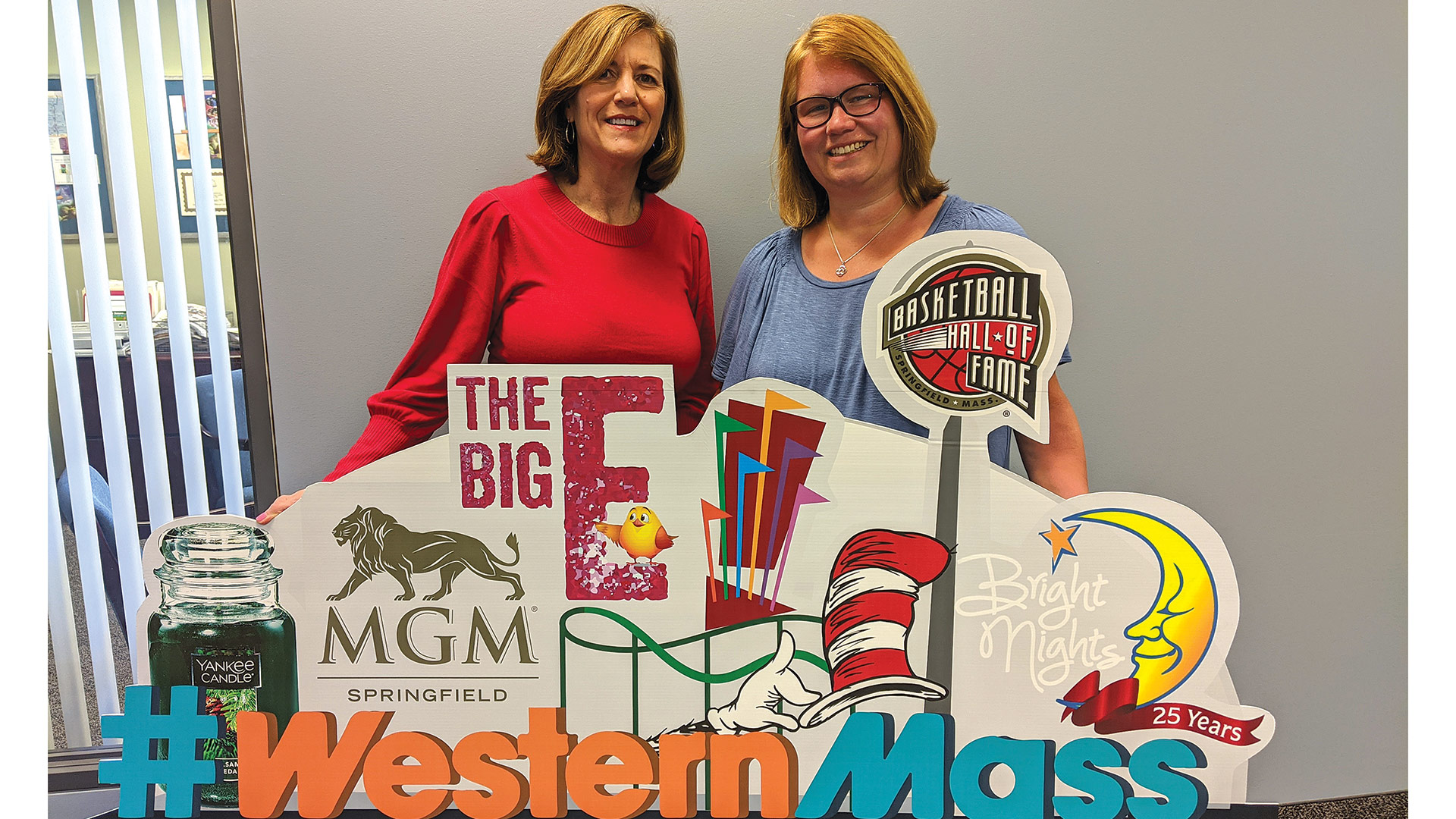 Mary Kay Wydra (left) and Alicia Szenda say the region’s recent momentum and new attractions have made it a stronger sell to event and convention planners.

Conventions are good business for a city like Springfield. But they don’t exist in a vacuum.

“We’ll ask if they have time for things outside their program,” said Mary Kay Wydra, president of the Greater Springfield Convention & Visitors Bureau (GSCVB). “Are they bringing spouses? Will they have time, either pre-event or post-event, to go to Yankee Candle, or Six Flags, or the Seuss museum?”

“That’s part of their convention experience as well,” added Alicia Szenda, the GSVCB’s director of Sales. “They might be at the MassMutual Center for three or four days, but they might do a couple off-site events, too. We can help them — ‘OK, do you want to do the Springfield Museums? The Hall of Fame? What is it that your group is interested in?’ Because we do want them to have a good experience and feel welcome.”

Both Wydra and Szenda share a philosophy that, while conventions and major sporting events positively impact the region during the weekend or week they’re around, they also pose an opportunity to draw convention-goers back in the future — either as a group for future events, or individually, as leisure travelers.

That’s why attracting convention business focuses not just on the venue, lodging, and amenities involved in the event itself, but on the entire region.

“Our goal is always to expose them to more of what we have to offer,” Wydra told BusinessWest. “Sometimes we whet their appetite, and they come back as a leisure visitor. That’s a goal. If we do our job right, they’ll come back again.”

And when they’re here, they’ll spend money, from hotels and restaurants to gas stations and recreation destinations, Szenda added. “We’re really lucky we have great attractions, and that’s enough to keep people entertained while they’re here and get them to come back.”

The convention and event mix in 2020 is a diverse agenda, one featuring newcomers and repeat business alike. The city recently hosted the New England Fence Assoc., which the GSCVB had been trying to bring in for years, as well as the New England Region Volleyball Assoc. (NERVA). In its sixth straight year here, the latter event filled 2,000 hotel-room nights over the course of a weekend.

The city will also host the Amateur Athletic Union volleyball super-regional in March — partly because someone who took part in the NERVA event liked what he saw from the city. “We’re hoping that becomes annual as well,” Szenda said.

Other upcoming events include the largest collegiate fencing competition in the country and a First Robotics event at the Eastern States Exposition, both in April; a gathering of the National Assoc. of Basketball Coaches in May; and Hooplandia in June. And that’s just the tip of the iceberg.

In all cases, Szenda said, the goal is to match what an organization needs with what a venue — and the city and region — have to offer. Take the International Jugglers’ Assoc., which convened in Springfield last year.

“This group was looking to go anywhere in the country, so we looked at their parameters and put together a proposal. They needed a convention center, two full-service hotels within walking distance, a historic theater, and a fun kind of bar atmosphere with a stage. I read that and was like, ‘that fits perfectly here,’” she recalled, noting that Symphony Hall was an ideal theater, and Theodores’ fit the bill for the bar.

“Our goal is always to expose them to more of what we have to offer. Sometimes we whet their appetite, and they come back as a leisure visitor. That’s a goal. If we do our job right, they’ll come back again.”

The GSCVB will also suggest gathering options that planners might not know about — perhaps a cruise outing on the Lady Bea, or an outdoor reception at the Springfield Museums. “You can have a unique dinner event on Center Court at the Basketball Hall of Fame. Nowhere else in the world can you do that event. We try to be creative, and try to really hype the assets we have.”

The GSCVB has seen an uptick in conventions in recent years, and Szenda is constantly talking with hotels, asking them to quote rates and block off a certain inventory of rooms, sometimes three years out. Then she gets to work finding the aforementioned local connections, setting up reasonably priced hotel options and assembling tourism information about the region.

The bureau also boasts a hospitality program that many similar-sized cities don’t offer, which includes everything from airport pickups and hotel greeters to downtown maps and goodie bags.

“At the end of the day, it’s about sales,” she said. “We go to trade shows, but we also get leads from locals who live around here who might be part of national associations or hobby groups or special-interest groups who want to bring the event they travel to every year here. Once we make that initial contact, the process becomes pretty streamlined. We want to get all the information we can from them — how many room nights do they need? What kind of venue do they need?”

Organizations based in New England already see Greater Springfield as a convenient location, with interstates 90 and 91 intersecting here, and they might be aware of its recreational and hospitality options. Those from far away, though, may need some convincing, and that’s what Szenda does when she attends those industry trade shows, where she may schedule appointments with up to 30 meeting planners or sporting-event organzers to talk about how this region suits their needs.

“We’re Western Mass. — we don’t have the cachet of a first-tier city, like Boston or Chicago,” Wydra said. “With national groups, a lot of times, that’s where a local person comes into play.”

For instance, the National Square Dance Convention, a national gathering of Daughters of the Nile, and a large insurance convention all landed in Springfield in recent years because a local member got the ball rolling. “I think the local tie to national groups is a really important and powerful one for us.”

One selling point is that national groups that hold conventions in the Pioneer Valley get plenty of local attention — everyone knows they’re here, and are often excited about it.

“We tell the event planner, ‘you’re going to be a big fish in a little pond,’” Wydra said, noting that Daughters of the Nile held its convention in Orlando the year before coming to Springfield. “I don’t know if the local people knew they were in Orlando. But when they came to Springfield, there was a story or photograph in our mainstream media, talking about this group, every day they were here. You kind of take over our city, our region.”

Another plus? Springfield is a different city than it was five years ago, with MGM Springfield, the Seuss museum, and ongoing Basketball Hall of Fame renovations among the recent major stories.

Wydra agreed. “That makes our job so much easier and more exciting. The sell is easier when we can say we’ve added these things.”

‘It takes a village’ is a bit of a cliché, Wydra admitted, but in the GSCVB’s case, it really is true, especially when it comes to booking events and providing the kind of experience that will bring people back.

“It does take a village to host a group of people. Everyone’s got to work together,” she said, adding that the region is fortunate to have assets like Eastern States, a campus-like setting with plenty of parking and room for large equipment, not to mention a modern convention center in the heart of Springfield and a couple of anchor hotels downtown complemented by a growing roster of lodging options around the region.

“Anyone who lives here and belongs to a group or goes to an event they want to host, they should contact me,” Szenda said, putting that sales hat back on for a moment. “If we get the site visit, we have a better shot of landing that event.”

“We do the work for them,” Wydra added. “We try to make it as easy as possible, but those local leads are so important.”

Old Meets New at the Red Barn at Hampshire College