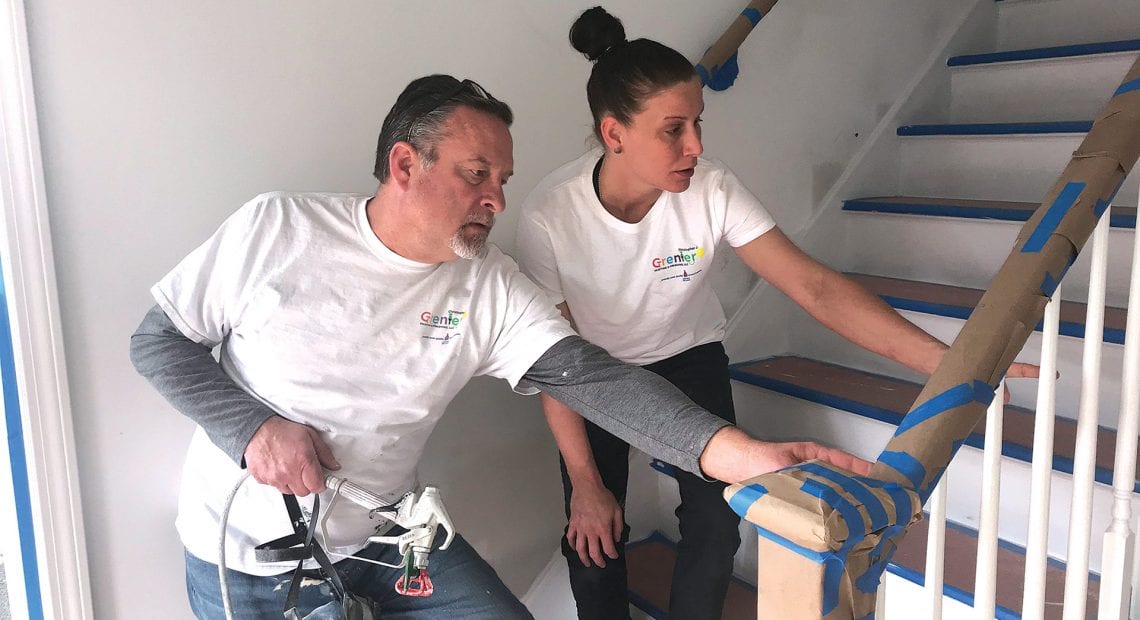 Advice — on the House 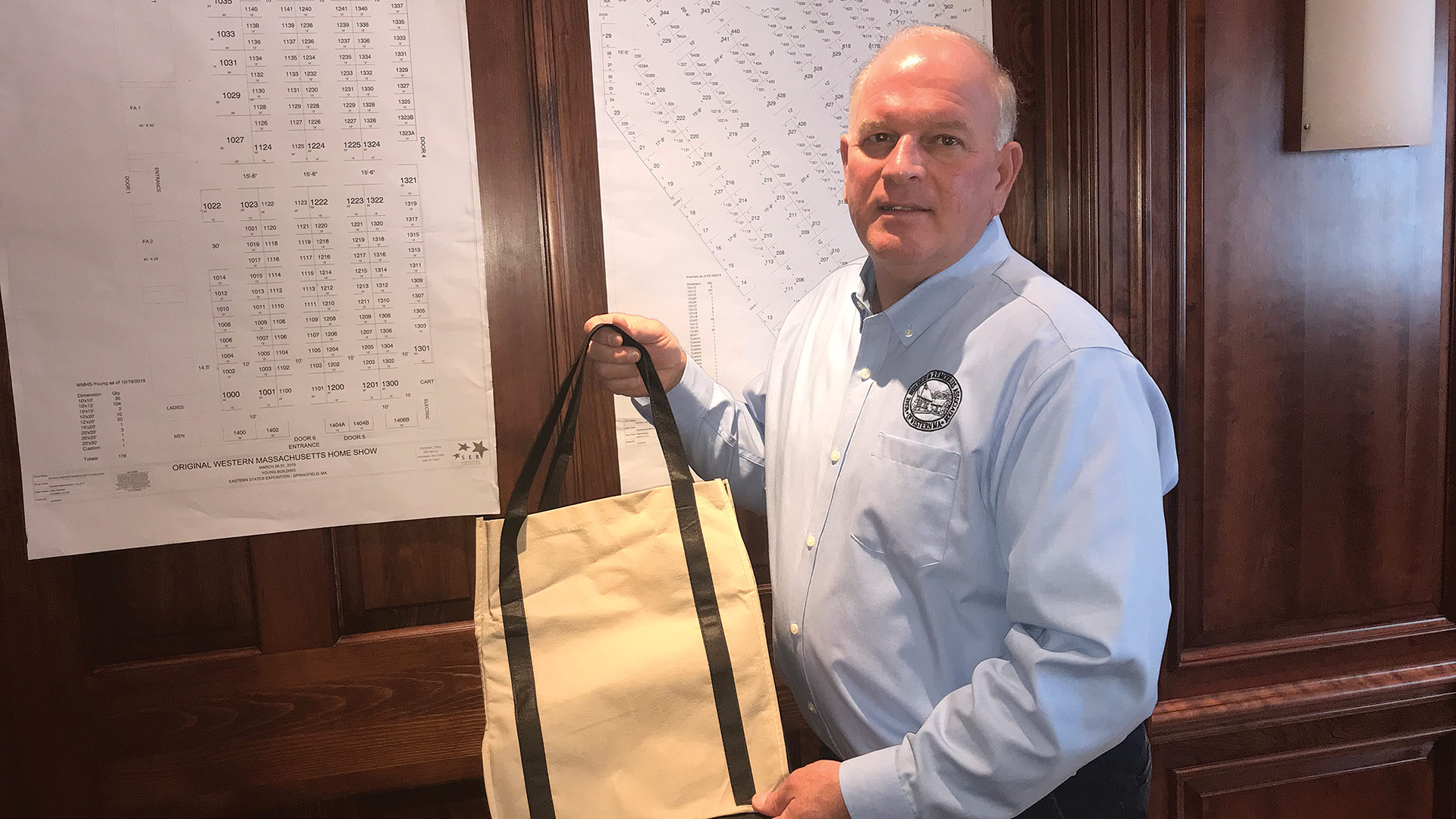 Andrew Crane holds up a prototype of one of the reusable bags attendees will receive at the 2020 Home and Garden Show.

Sometimes the online approach isn’t the most efficient way to tackle a project.

“If you’re looking to hire a landscaper, for example, you could look all over the internet and be dissatisfied,” said Andrew Crane, executive director of the Home Builders and Remodelers Assoc. of Western Massachusetts (HBRAWM).

Instead, he suggests conducting a search at the Western Mass Home and Garden Show, where consumers can speak directly with local landscapers and myriad other professionals.

Crane’s organization sponsors the annual event, which is now in its 66th year. Held at the beginning of spring, this year’s edition is scheduled for March 26-29 at the Eastern States Exposition grounds in West Springfield.

Originally, the event served as a venue for tradesmen in the association to familiarize each other with their craft. Over time, the show evolved, putting more emphasis on consumers, and has grown to the point where more than 350 exhibitors reserve space every year.

Exhibitors at the show can help consumers with everything from replacing a faucet to building an entire home — and everything in between. Innovations in building products, as well as home-related services such as Realtors and insurance agents, all have a presence at the home show. 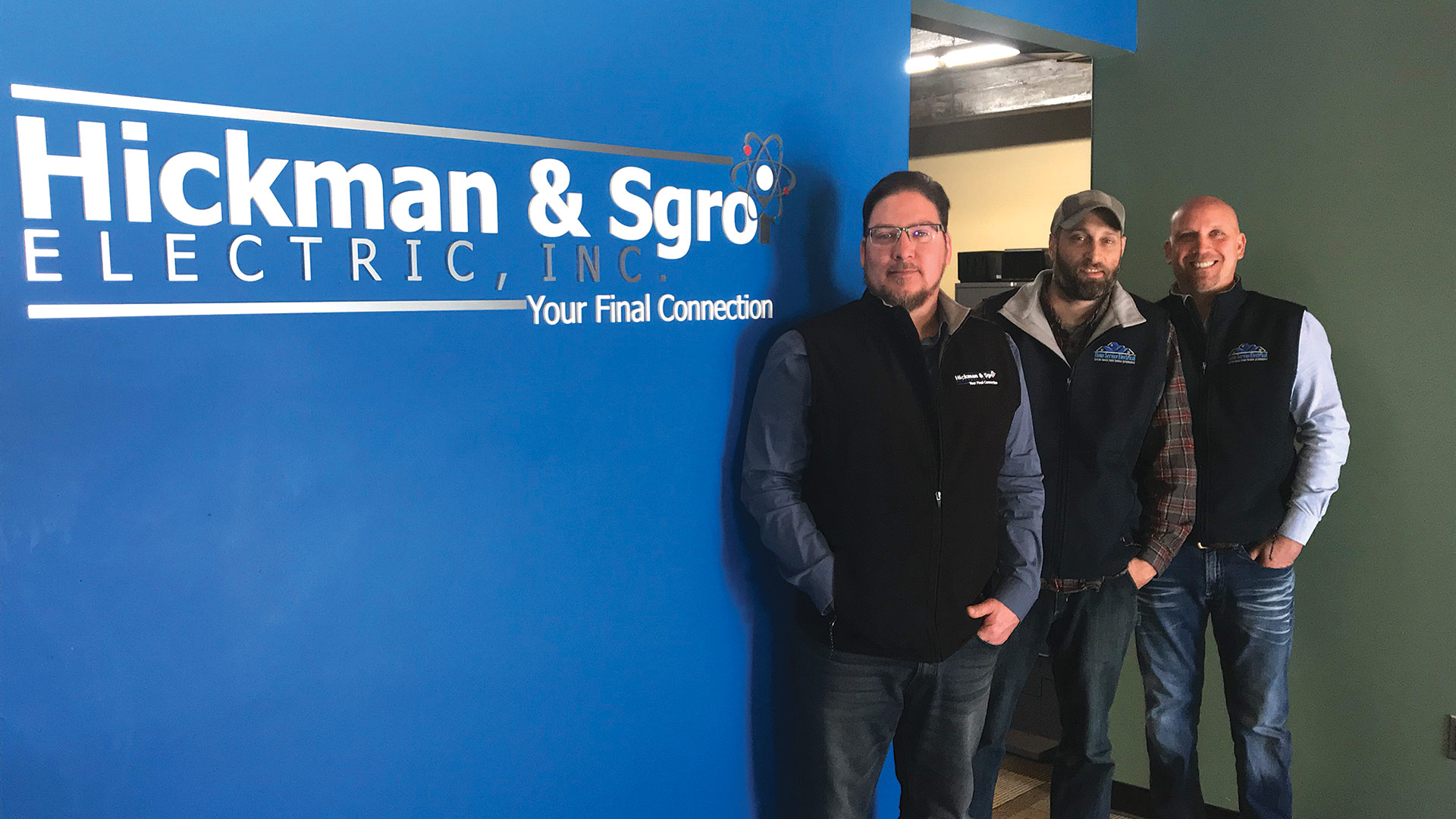 Todd Hickman, Steve Sgroi, and John Collins will use the show to introduce a new segment of their business, Home Service Electrical.

Regarding that landscaper search, at press time, four landscapers had reserved booths at this year’s home show. For landscape projects that involve ‘hardscape’ (incorporating stone work into a landscape design), 14 different vendors of this specialty have signed on.

BusinessWest caught up with several different exhibitors to this year’s show, representing a wide range of industries. Their home-show experience varies from nearly two decades to a couple of first-time exhibitors, but they all share an enthusiasm about the opportunity to connect with people during the event.

Stuart Fearn, president of Safeco Foam Insulation, marks his 17th home show this year. “Since day one, the home show has proven to be a home run for my business,” he said, adding that he sees his main job at the show as educating people about spray-foam insulation, and it’s a worthwhile effort.

“We get a lot of business and awareness from the home show,” he noted. “It helps people know we exist, and we will often get calls up to six to nine months after the show when they need insulation.”

For nearly two decades now, remodeling has remained a strong trend in home projects. Whether someone is updating their current home or purchasing an older home to modernize, Crane said demand remains strong for windows, siding, and many other products that will fit into existing homes.

Scott Fleury, business development director for Kelly-Fradet Lumber in East Longmeadow, sees the home show as an opportunity to put consumers in touch with the best people for their remodeling projects. The current president of HBRAWM, Fleury has been a part of the home show for 10 years. Kelly-Fradet often displays kitchen, bath, and outdoor deck products it sells primarily through contractors. 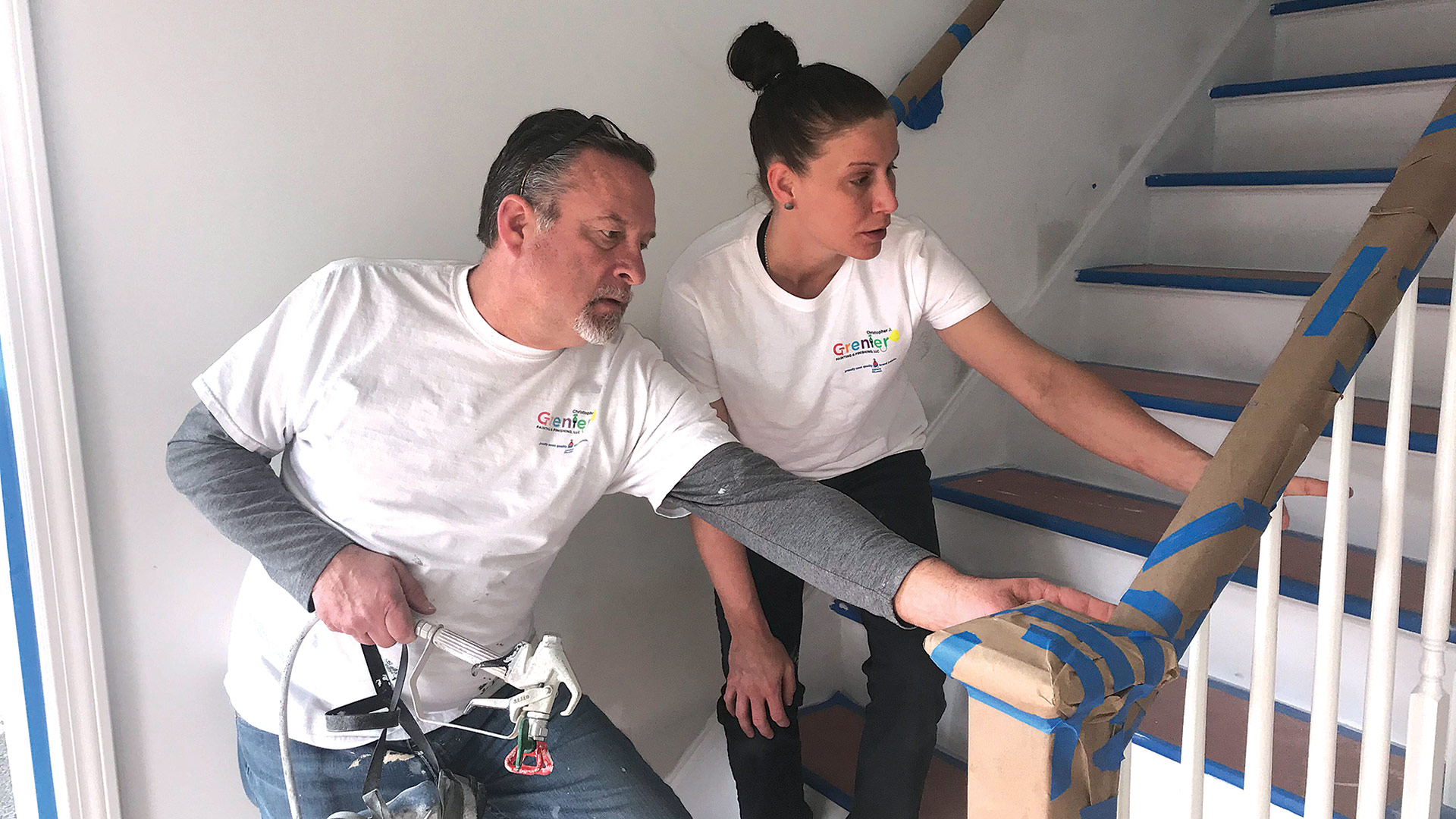 Painters Christopher Grenier and Jillian Forcier inspect the results of their recent work in a Northampton home.

“Often a homeowner will come to our booth with a project, and we are able to walk them right to a contractor who is also at the show,” he said. “On the flip side, contractors will bring people to our booth to show them the products we carry that apply to their project.”

Lori Loughlin, showroom manager for Frank Webb Home in Springfield, has taken part in the show for the past five years. Loughlin, vice chair of the organizing committee for the event, said her company sees an almost immediate return on its investment.

“Initially we see a big spike in sales right after the home show,” she said adding that the impact of the event often continues throughout the year. “People will come in as late as Christmas time and tell me they saw us at the home show.”

Christopher Grenier, owner of Grenier Painting and Finishing, reserved a booth at the home show last year for the first time. He enjoyed the experience so much, he is now on the event’s organizing committee.

Grenier noted that customers who need painting services often ask him for referrals about flooring, plumbing, and other services. He gladly recommends other members of the association to help customers find the right person for the job.

“I’ve recommended other painters when a customer needs someone who specializes in painting cabinets, for example,” he said. “We’re not in competition; it’s more of a camaraderie.”

One of the key benefits he sees to having a booth at the show is the ability to give people individual attention for their projects.

“When I’m asked why people should go to the home show, my response is, you’re going to find local people you can trust,” he noted.

Loughlin agreed and said that, because people can touch the products in her company’s booth, it helps them recognize quality kitchen and bath fixtures. When products like these are researched and then bought online, there’s no tactile experience, and service after the purchase is often lacking.

“Our customers know they can call us if there is ever a problem,” she said.
“There’s no sending things in the mail; we’ll just take care of it right here.”

As in past years, most booths will be located in the Better Living Center and the adjacent Young Building. New this year, the space between the two buildings will be used as a “contractor’s village” for products that exhibit better outside. 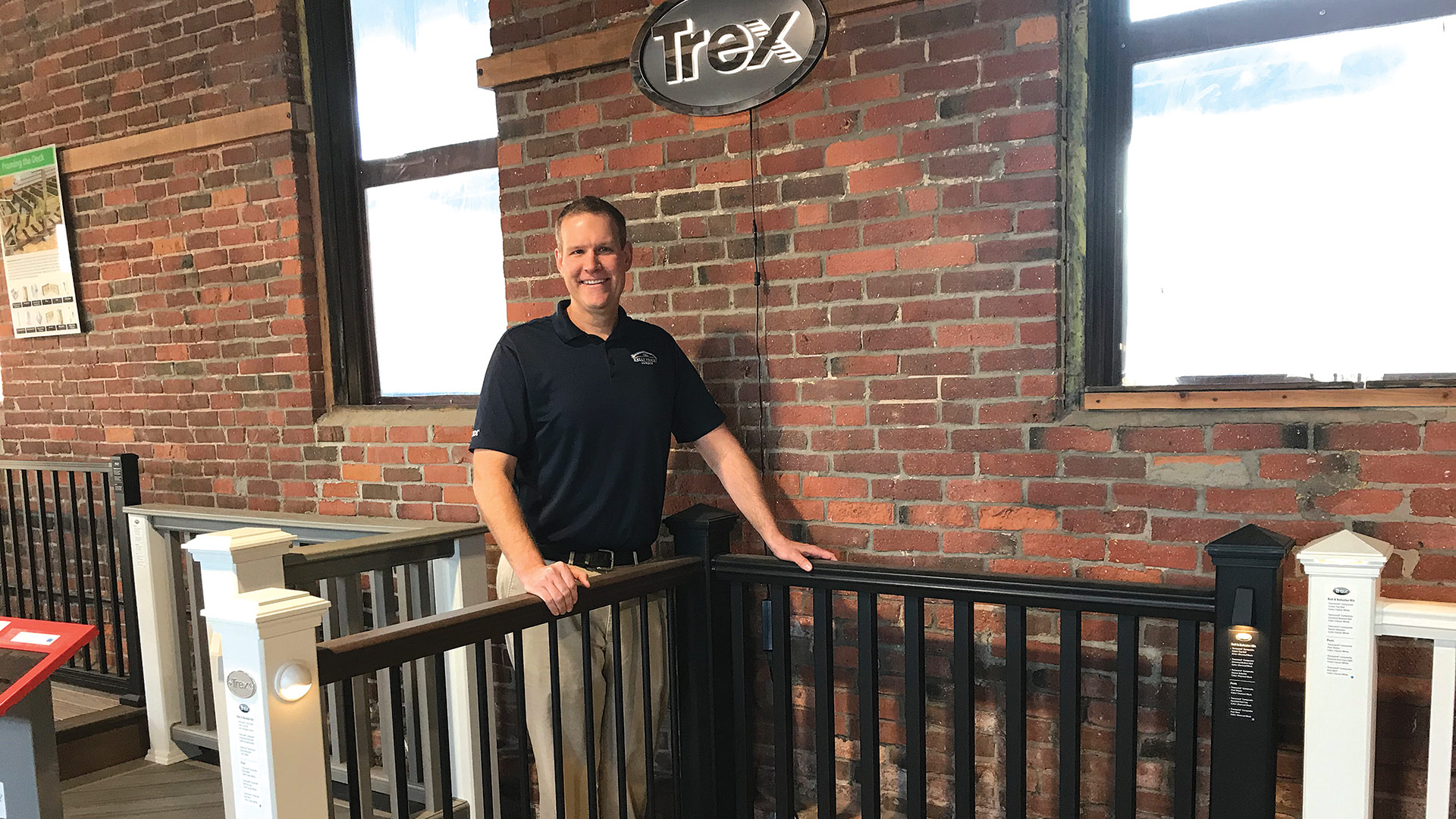 Scott Fleury helps Kelly-Fradet Lumber get all decked out for the show.

PV Squared Solar, a residential solar-energy installer, will forego the traditional booth setup indoors and will instead set up a solar-powered trailer in the contractor’s village to run electrical devices off the grid.

Anna Mannello, marketing coordinator for PV Squared, said that, as a first-time exhibitor, the home show presents a great way to connect with people in the community.

“PV Squared Solar is based in Greenfield, so we’ve done most of our business in Franklin and Hampshire counties,” she said. “While we’ve done a few installations in Hampden County, this will be an opportunity to increase our exposure to lots of new people.”

Mannello hasn’t yet finalized what appliances they plan to demonstrate, but during the four days of the show, attendees will be able to connect to PV Squared’s trailer to charge their phones using solar power.

It’s one thing to be a first-time exhibitor, and it’s quite something else to launch a new business at the home show. That’s how Todd Hickman, president of Hickman and Sgroi Electric, is approaching his inaugural exhibit.

While his company is an established residential, commercial, and industrial contractor, he and his partner, Steve Sgroi, are introducing Home Service Electrical, a membership-based, comprehensive approach to homeowner electrical needs. Instead of waiting for an emergency, Hickman said the service starts with a full inspection of the home’s electrical system to prevent familiar problems, such as losing power while cooking Thanksgiving dinner.

When a service call is needed, a professional technician in a fully stocked van will be expected to solve most problems in one visit. Each service has a standard price, so the consumer knows upfront what the job will cost. The home show represents an opportunity to introduce this different concept for electrical service.

“We’re creating a brand, so it’s important to educate the public on who we are, the image we present, and to assure people that we plan to be here for generations to come,” Hickman said.

Sgroi, vice president of Hickman and Sgroi, said their goal for the home show is simple, and it’s one shared by many, on one level or another.

“We hope to schedule inspections and grow the business until we are overwhelmed,” he said, while Hickman quickly added, if that happens, the business will gladly expand to meet the demand.

For many years, HBRAWM provided plastic bags for show attendees to collect information from exhibitors. Crane proudly noted that the plastic bags are gone and have been replaced this year with reusable cloth bags, similar to those found in supermarkets.

“It’s one small way our members can be part of the solution to improving our environment,” he said. The bag will include a map showing all booth locations and a guide with contact information on all the HBRWM members.

“If you have a specific project, the map and guide will help you navigate the show to get the information you need,” Crane said. “If you don’t have any projects and you want a social experience, then you can just walk around, and you’ll have a great time.”

He concluded that other home shows have come and gone in the area, but ‘the original’ home show is here to stay. “After 66 years, it’s now a piece of Western Mass. history.”

The Western Mass Home and Garden show will be open Thursday and Friday, March 26-27, from 1 to 9 p.m.; Saturday, March 28, from 10 a.m. to 9 p.m.; and Sunday, March 29, from 10 a.m. to 5 p.m. General admission is $10 for adults. Children under 12 are admitted free. Veterans and active military with ID are admitted free on Thursday only. Discount coupons for every day of the show are available at www.westernmasshomeshow.com.