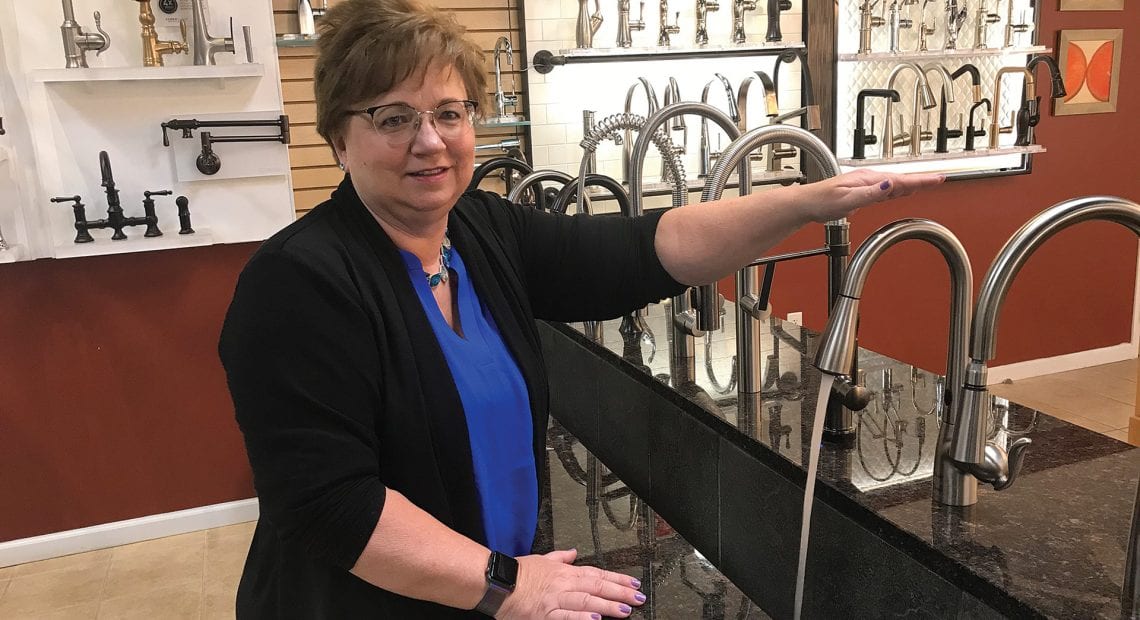 While interior-design trends in homes can be slow to change — and, in many ways, have been, as evidenced by the white and grey colors that still dominate — the way people are using their homes did change somewhat over the past year. That, and a growing desire among older homeowners to age in place, has influenced what people are looking for in kitchens and bathrooms — and they have no shortage of options to achieve their vision. 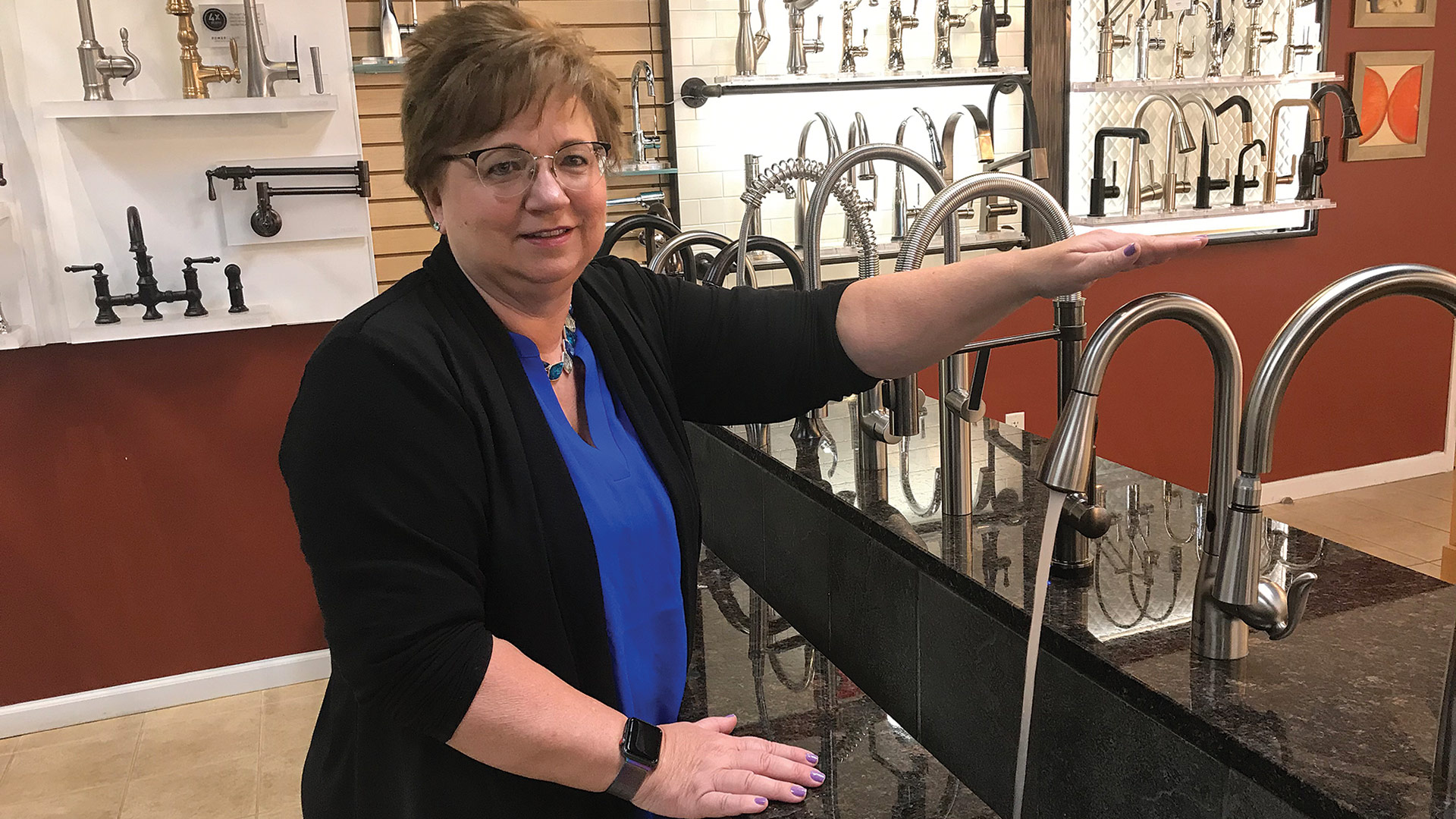 With a wave of her hand, Lori Loughlin makes the water flow from a touchless kitchen faucet.

While homebuyers want to put their own stamp on a new house, Scott Keiter said, when it comes to kitchens, they tend to think alike.

In fact, the owner of Keiter Builders currently has six new homes under construction, and for every one, the owners want kitchens that provide plenty of light, an airy feeling, and enough room for people to gather.

“We’re seeing less of a distinction between the kitchen and living area and more of a merger as the two morph into one space,” he said.

In many cases, the anchor to this space is the kitchen island. While islands have been popular for years as a way to provide more counter and cabinet space, during the pandemic, they saw increased use for food preparation as people ate more meals at home. The island also served as a desk for many who suddenly found themselves working from home. As a result, Keiter said, islands have become more multi-purpose, and the kitchen is now seen as a multi-use space.

“On top of the normal cooking and food prep, we’re seeing a movement to make the kitchen a more communal room. It’s becoming a place to work from home, as well as a place for guests and friends to congregate.”

While the kitchen is becoming more of a gathering place and its form and function are changing, Dave Lloyd, manager of Budget Cabinet, said every customer looking to remodel that space shares one objective: convenience.

“While new houses allow for bigger islands, we do a lot of remodeling projects where people are limited by the footprint of their house,” he said.

Whether incorporating an island or not, one trend that addresses convenience and improved function is what Lloyd called “drawers over doors.” Many cabinet designs offer wide and deep drawers to store bulky or heavy items. That way, instead of making someone reach overhead for heavy dishes in a cabinet, a waist-high drawer allows for easier access — which becomes more important as people age.

“We’re seeing less of a distinction between the kitchen and living area and more of a merger as the two morph into one space.”

Aging in place also comes into play in bathroom design, said Lori Loughlin, manager at Frank Webb Home. These days, she noted, handheld shower heads are the choice of nearly every bathroom renovation. Also popular are shower fixtures that combine a handheld with a rainfall feature.

“We work with many people who want to age in place, so we stress that a handheld shower is more convenient to use and clean the shower stall,” she explained.

Converting old bathrooms to accommodate a lower-threshold shower for the aging or physically challenged isn’t new, she added, but the styles are changing. “There are things we can do to make a shower safe and functional without it looking institutional. For example, there will be a seat and grab bars, but they are done with more style, so the result looks more like a spa.” 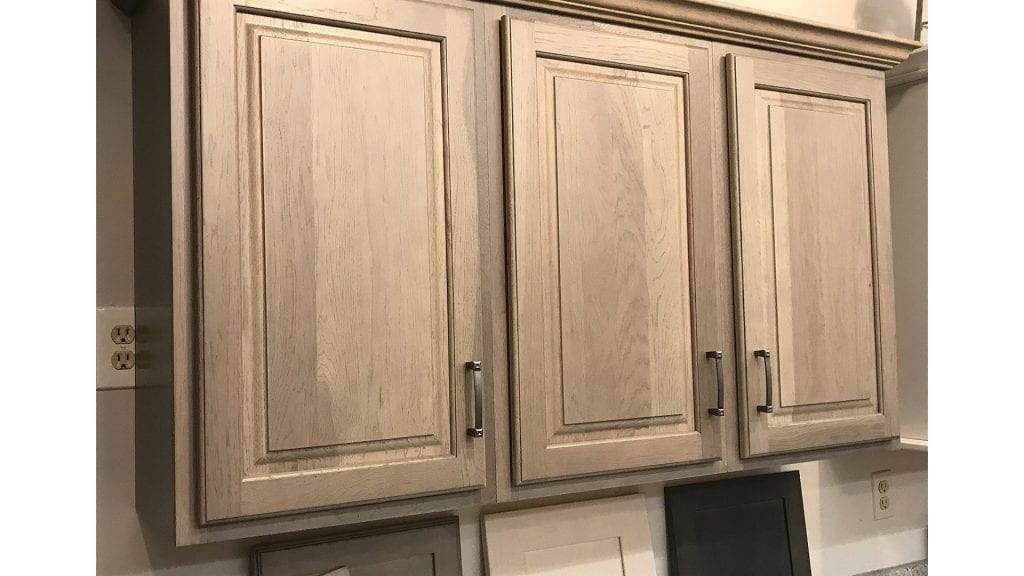 Colors such as gray translucent stain are appearing in more kitchens.

Aging in place also affects kitchen design, where islands are available in multiple levels, with a lower level constructed to accommodate seniors or people in a wheelchair.

Because everyone is more aware of touching surfaces, touchless bathroom faucets and a toilet that flushes by waving one’s hand over a sensor are available as well. While once considered gimmicky, sophisticated toilet seats that have a warmer built in, along with a bidet, are growing in interest. Loughlin noted that these more premium seats also contribute to aging-in-place considerations by allowing people who might otherwise need assistance to take care of themselves.

Such bathroom renovations might seem like an indulgence, Lloyd said, but the result is a space that provides easier access and convenience, again, allowing people to live in their homes longer.

During this boom time in home building and renovations, BusinessWest caught up with several professionals who shared what their customers are looking for in their kitchens and bathrooms — for both their present and future needs.

Lloyd noted that today’s kitchens emphasize designs that are high-functioning and less ornate, and tastes are trending toward cabinet designs with clean lines such as the Shaker look, as well as simpler cabinet hardware.

While the overall trends haven’t changed much over the years, he added, colors have seen some changes. “Translucent cabinet stains are becoming popular because it gives you some color, but you can still see the grain of the wood. Whites and grays — both light and dark — are still very popular color choices.”

Lloyd said his customers want interesting but not ornate designs in kitchen backsplashes, while upscale appliances remain very popular in kitchen remodels, with stainless steel a popular option and black stainless on the rise as a trend.

Black may become the new neutral, Loughlin said, noting that touchless and black faucets are currently big sellers in kitchens. “For the next couple of years, I think we will be seeing a trend of faucets with mixed metals, such as black and gold,” she noted, while faucets with a black finish are trending in the bathroom as well. 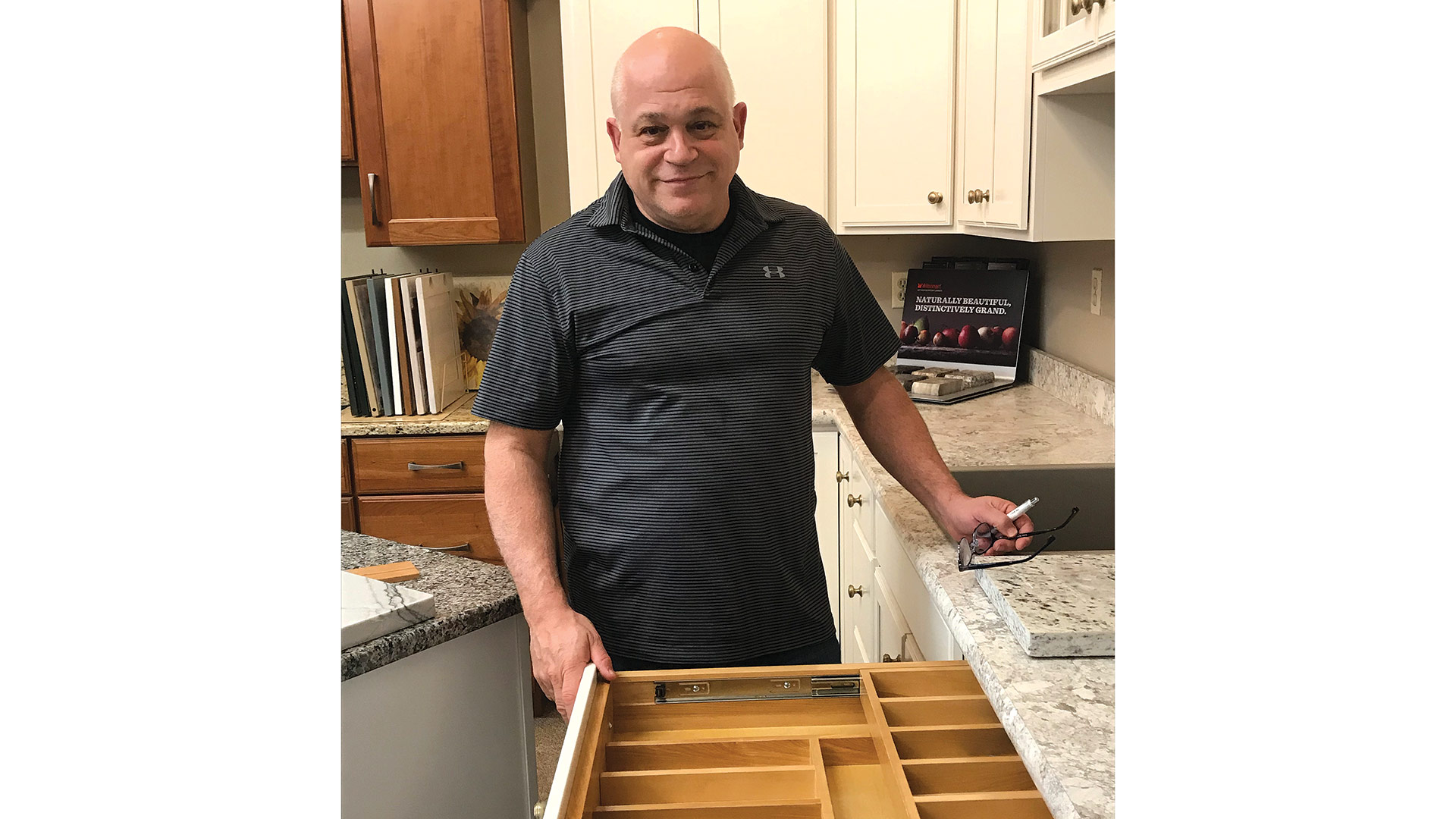 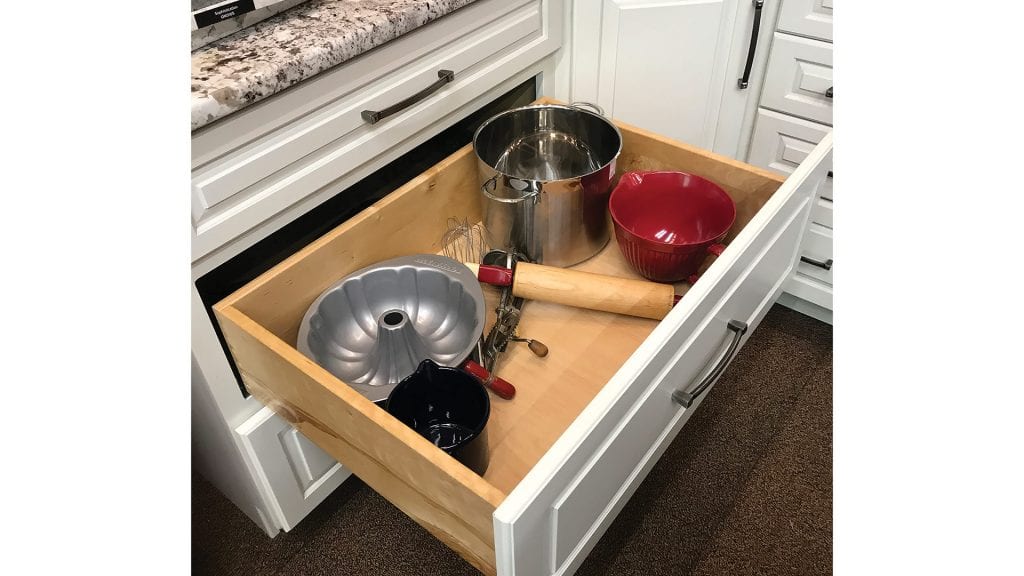 While white farmhouse sinks remain popular, she said they are now available in black and other colors to better match darker shades of quartz and granite countertops. Speaking of which, quartz has passed granite as the most popular stone countertop material.

“People are spending more time in their kitchens, so they are getting what they want,” she explained. The styles that resonate most with her customers include the contemporary farmhouse look and industrial chic, where faucets and lighting have a stylish but industrial look to them.

Kitchen floor upgrades were once limited to hardwoods or tile floors made of ceramic or porcelain. Eclipsing both of those choices, the current most popular trend in flooring is LVT, or luxury vinyl tile. Resembling wood planks, LVT floors click into place and are known in the industry as ‘floating’ floors, so named because they are not glued down. Jake Levine, manager of Advanced Rug and Flooring Center, said the waterproof properties of LVT make it a best seller in his store.

“Because LVT handles water so well, it is replacing other more expensive alternatives,” he said. “LVT is also 40% warmer to the touch than a tile floor, and it’s not prone to chipping, also an issue with tile floors.”

Installing a hardwood or tile floor takes real expertise, Levine explained, noting that LVT floors can be a do-it-yourself project because they allow more room for error.

“If you don’t like the direction of the planks, you can unclick them and reinstall,” he said. “I’m not saying everyone will get the same results as a professional, but a capable DIY-er can do it.”

For customers who prefer a tile look, LVT is available in 24-by-12-inch pieces featuring stone patterns that click in place similar to the planks. This style and its waterproof properties make it a good choice for a bathroom, but Levine said most people still prefer porcelain or ceramic tile.

“For many people, the word ‘vinyl’ suffers from an old stigma of linoleum floors that discolored and peeled,” he said. “The click floors are very good for bathrooms because they are designed for areas that get water.”

As Western Mass. is known for its many older homes, a bathroom renovation can often involve converting a spare bedroom into a larger, more modern bathroom, usually adjacent to the master bedroom. Lloyd said this is a popular renovation among empty-nest couples. 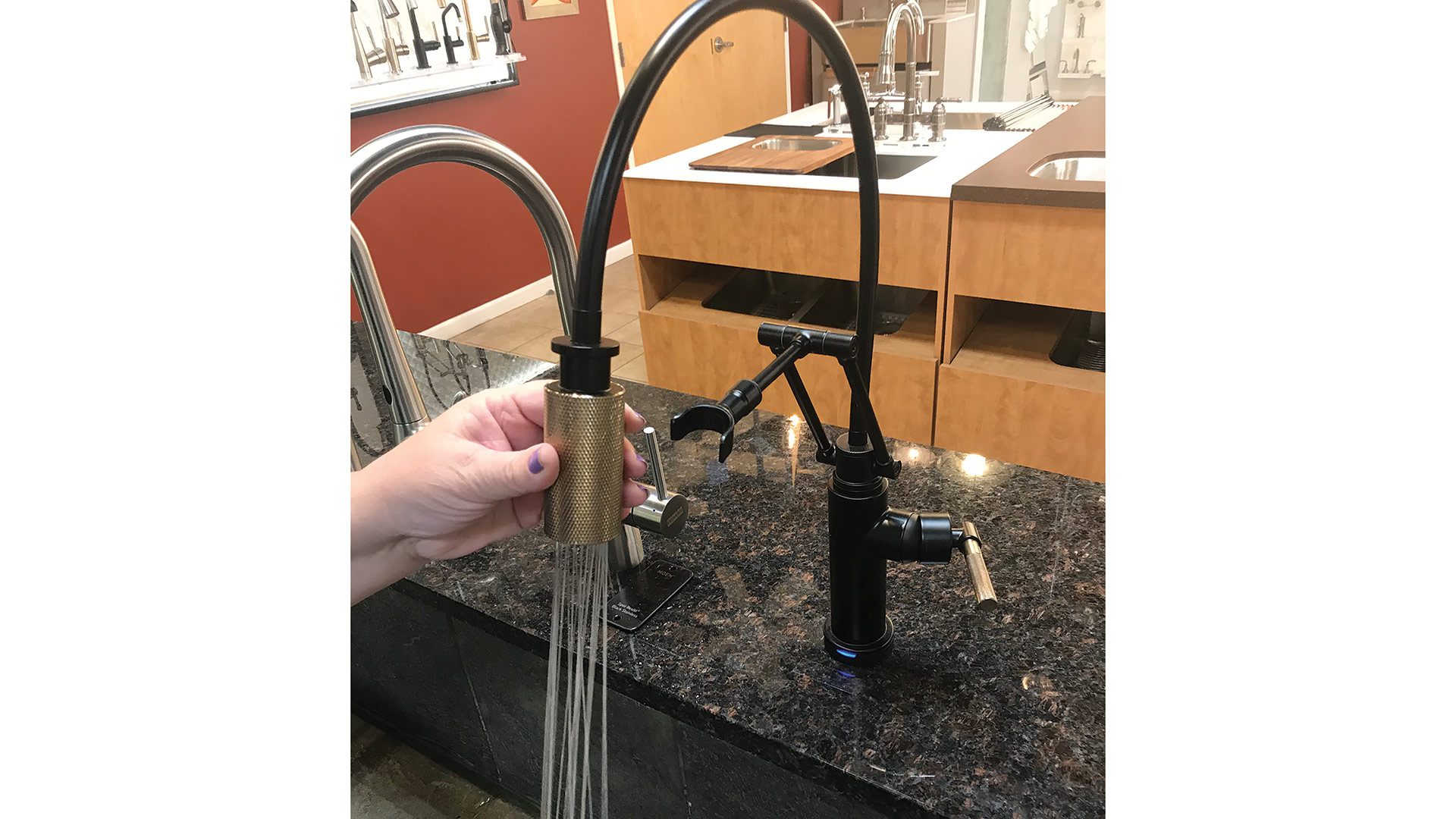 Mixed metals are an increasingly popular option for kitchen faucets.

“People who want to stay in their home are figuring out how to use the same square footage, but improve it,” he explained. “The idea of living space is changing, where people will give up a bedroom for a luxury bathroom with better lighting, better shower, and more storage in the cabinetry.”

While many bathroom renovations replace the tub with a more upscale shower, Loughlin said that decision is usually driven by personal preference.

“There are bath people, and there are shower people,” she noted. “People who like to take baths will spend whatever they want for a bathtub, while those who only want a shower won’t even install a bathtub in their master bathroom.”

As Seen on TV

For those considering upgrading a kitchen or bathroom, popular media such as the HGTV cable network and social-media sites Pintrest, Instagram, and others offer endless examples of what’s new in design and accessories.

“Every customer who comes in has at least one Pinterest photo on their phone, or they reference something they saw on HGTV,” Lloyd said, adding that houzz.com is another influencer.

Meanwhile, Levine credits HGTV shows with increasing the awareness of LVT flooring. “The vinyl plank is now common knowledge thanks to them.”

Loughlin said the Frank Webb showroom carries several kitchen sink styles that appear on HGTV because customers often have a vision that is influenced by the network. While helpful most of the time, however, these shows can also contribute to outlandish and unrealistic expectations.

“Some people think they can redo their house in 30 minutes; it just doesn’t work that way,” she said. “It’s not unusual for the timeframe to surprise people, especially now, when hiring a contractors is more difficult because they are all so busy.”

While new trends emerge in kitchens and bathrooms, older ones are meeting their demise. In new homes, Keiter noted, people still want bathrooms that are upscale and functional, but use less space.

“Real estate is so expensive now, some people are reassessing where they want to spend their money,” he said. “Instead of a 250 square-foot bathroom with a whirlpool tub, they are opting to lose the whirlpool and reduce the overall size of the bathroom.”

Instead, he said, customers are spending their money in the kitchen or a sunroom, where they spend far more of their time.

In the spirit of simplicity and a clean look, Lloyd said the recent trend of glass cabinet doors is on its way out because “people like to put things away and not have to keep looking at them.”

He also noted that counter space for wine bars is starting to give way to dedicated cabinetry to house an emerging trend: coffee bars. “Wine was big for a while, but coffee has become bigger of late.”

Though tastes may differ, kitchen and bath professionals all agree that customers these days have plenty of options.

“Manufacturers are expanding their product lines to accommodate many different tastes and needs,” said Loughlin, giving people the opportunity to follow their vision or create their own style. 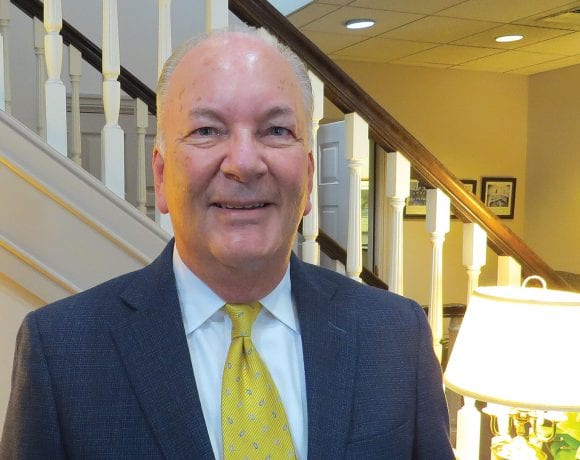 Bankruptcies Expected to Skyrocket in the Months to Come 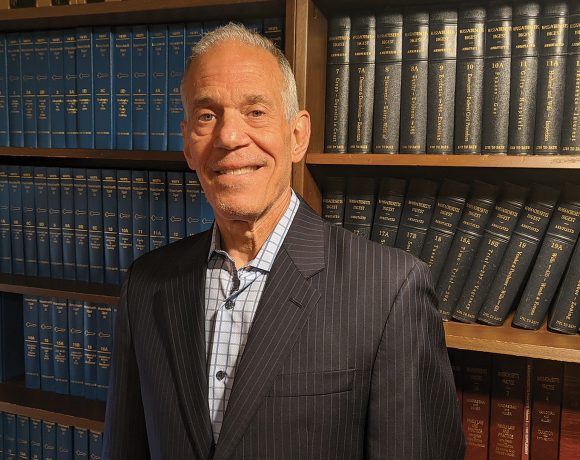